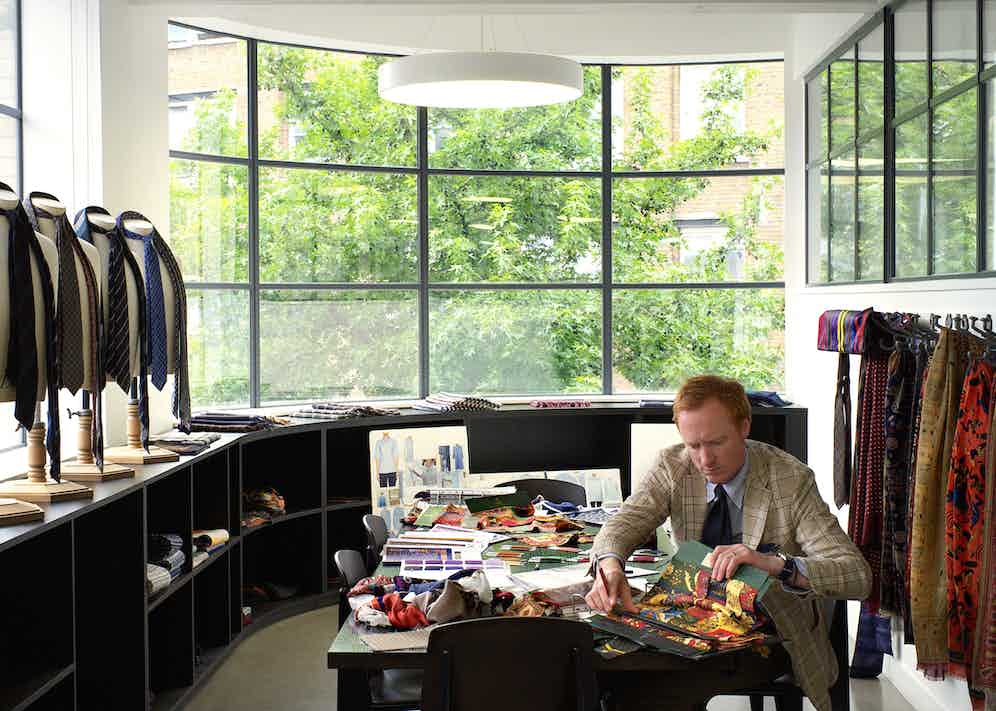 Something we think about all the time at Drake’s, is that we want to make clothing that is perennial — clothing that goes on and on. It’s something that we want to really emphasise more, going forward. Even though we have seasonal collections, we feel that there’s a sense of sustainability in what we’re selling within those collections. It’s not a matter of fashion, things that go in and out of vogue. When we make a sale, we want that item to go to someone who’s going to wear it, care for it, love it and enjoy it for a very long time. That’s what’s interesting about The Rake Values, you’re making those sorts of long-term purchases more accessible.

Many of the suppliers that we work with have been in business for decades and some, for hundreds of years. We don’t work with them because they can make something at the lowest price, but because they can make the highest quality. We believe in supporting what our suppliers do, showing we’re committed to them. We could certainly find cheaper places to source, but that’s not the point. We want to produce clothing that’s special and authentic, the real thing. Perhaps that means you can’t buy things as often, but that’s OK by us. We’re happy to sell a bit less, but to do it in the right way, and to make things that last and will provide our customers with real enduring value. Gosh, I’m certainly not making out of that we’re saving the world, not by any means. But a vision of the long term has always been important to us. I’ve got clothes that were passed down from my father, or my grandfather, and I love that. And that’s pretty sustainable, isn’t it? I hope that things from Drake’s will be passed down the generations by our customers, that they’ll go on and on being useful.

Pretty much everything we make uses only natural fibres, and we’re very conscious of ethical sourcing of materials and working with ethical manufacturers. Most of what we make is produced in the UK and Italy. We’re proud of that. I’m not saying we would never produce elsewhere, if there was a particular capability we could find elsewhere, where they did it better, but it has got to be for the right reasons. We would never move manufacturing elsewhere simply on the basis of price. That’s boring. It’s dull. We don’t have to do that. And it’s just not good enough to do that. Perhaps that results in the product sometimes being perceived as expensive — albeit, much less expensive than a lot of other brands. I fully appreciate that many people would say what we do is quite expensive. However, I would suggest that there’s a lot of value in it as well. Something can be expensive, but still great value if you get years of use and enjoyment out of it, and appreciate the work that went into it. It’s simply a matter of explaining or demonstrating that value to the customer, telling that story.

People are getting more conscious of sustainability, and of craftsmanship — thinking about how the things they consume are made, and who they’re made by. There’s a convergence of the two, they work in parallel. And isn’t it interesting that this interest in craftsmanship and organic, farm-to-table and so forth has come along at a time when we’re more dependent than ever on technology? We, the human race, are becoming closer and closer to technology, it’s becoming more influential in our lives. And yet when it comes to clothing, there’s ever-increasing interest in products that have come from somebody’s hand, products that have a human being and therefore a story and a history behind them. I find that fascinating. It makes a lot of sense that we should want the things we put on or into our bodies to be natural. And it’s quite reassuring, frankly, knowing there’s a human and not just a machine behind these things. That’s what I think, at least.