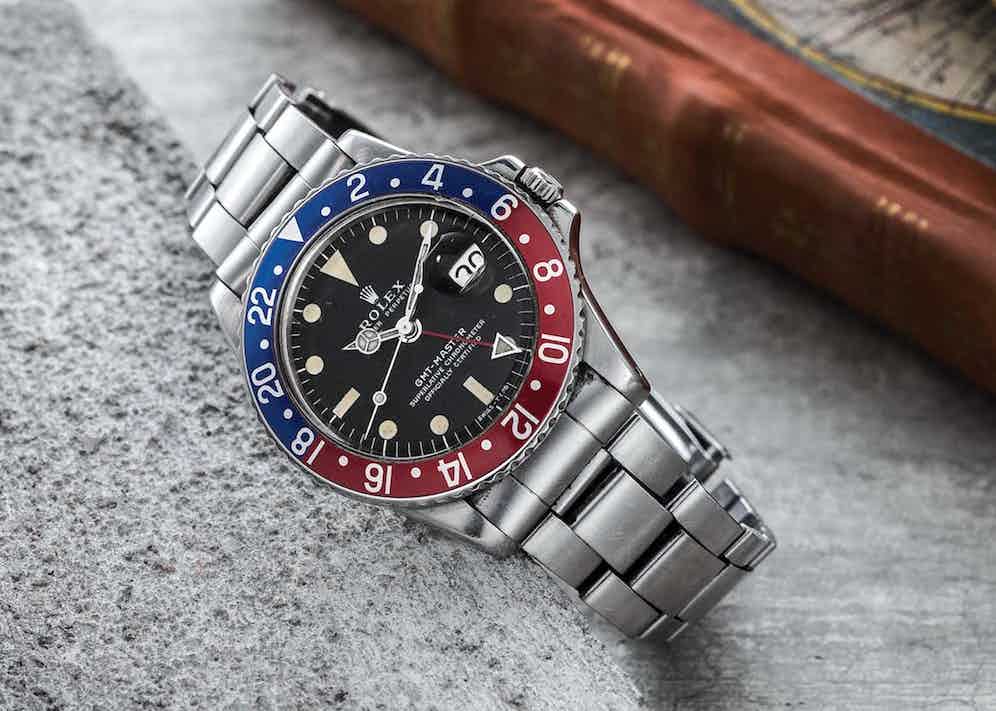 The Rolex GMT-Master story began in 1954 when Rolex introduced the reference 6542. The watch was housed in the classic steel Oyster case, which was 38mm in diameter. This was one of the first sports watches from Rolex and construction-wise, it set the standard for the foreseeable future. As with the present-day watches, the 6542 case was essentially of three-piece design.

The watch had two innovations that were big news at the time, but aspects we take for granted in the modern era. The first and less obvious was the date magnifying bubble, or to use Rolex terminology the cyclops. This was a new feature introduced the year before (1953) on the Datejust line. The second was, of course, the dual time zone complication. 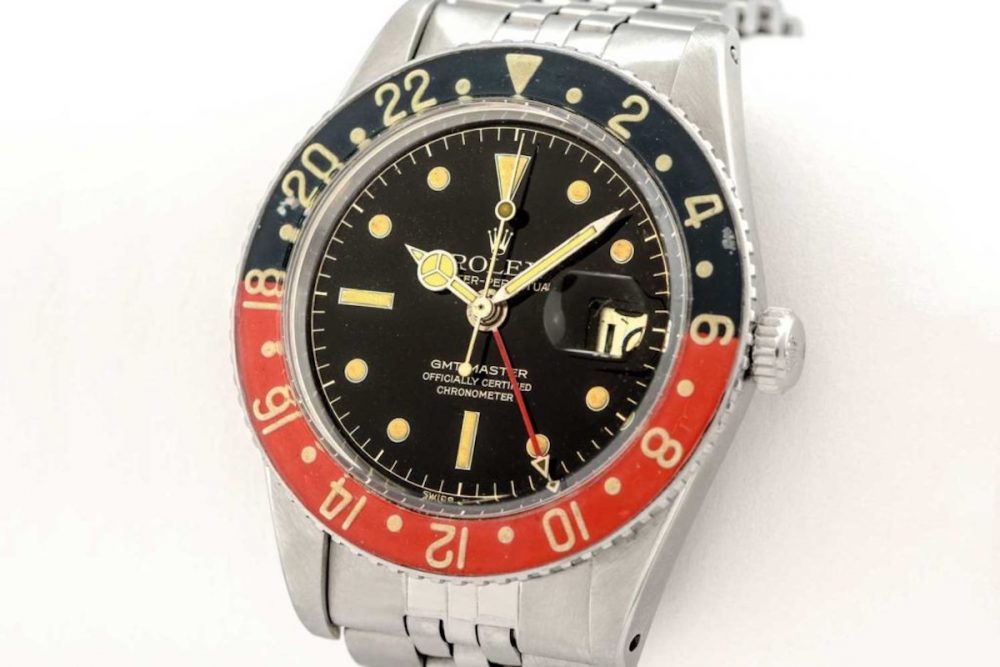 Rolex introduced the GMT-Master reference 6542 in 1954

The dual time zone was a useful tool for pilots and those who were travelling a lot across different continents. The ability to track local and home time was especially useful for commercial pilots. The American airline company, Pan American Airlines (or Pan Am for short) approached Rolex and asked them to develop a watch for their pilots. This partnership led to the development of the GMT-Master and in particular the first reference 6542. The commercially released watches housed a base caliber 1030 which was modified to include the 24 hour hand and was given the caliber number 1065. This chronometer rated movement was a four-hand calibre with date function. The 24 hour hand completed one full rotation every 24 hours and the bi-directional bezel could be rotated to allow the wearer to monitor the home time once they had adjusted their watch to local time or vice versa. 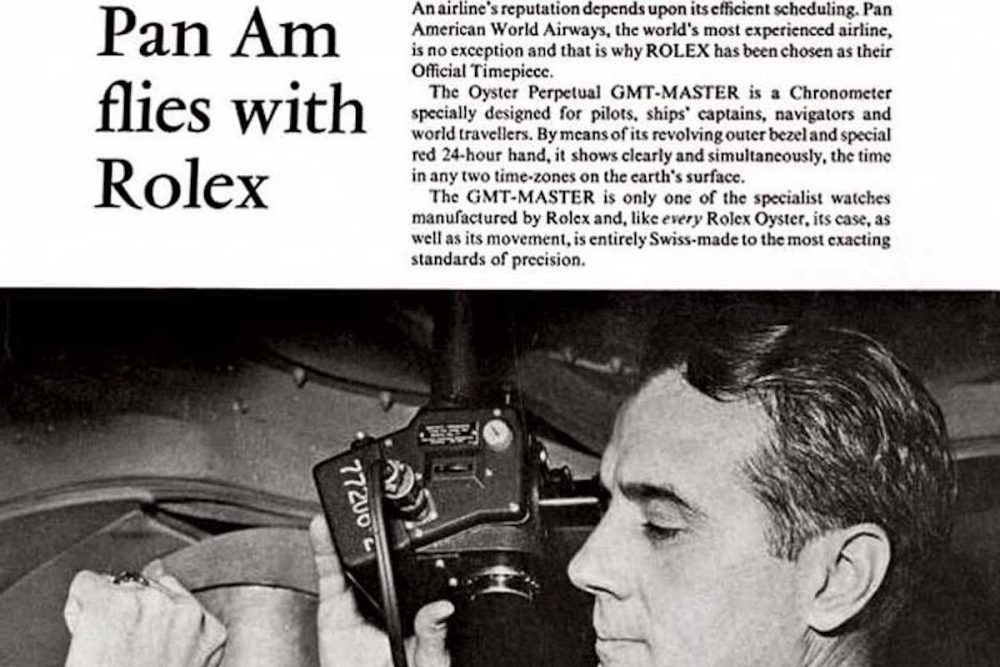 In 1959 Rolex launched their second series of the GMT-Master, a reference that would run until approximately 1980, the reference 1675. This new reference featured the new 1530 series movement, in the case of the GMT-Master caliber 1565. The most striking feature of the updated watch was the presence of crown guards. The case had been enlarged by 2mm and was now 40mm (excluding the crown guards) and was again available in both stainless steel (1675/0) and 18ct yellow gold (1675/8). 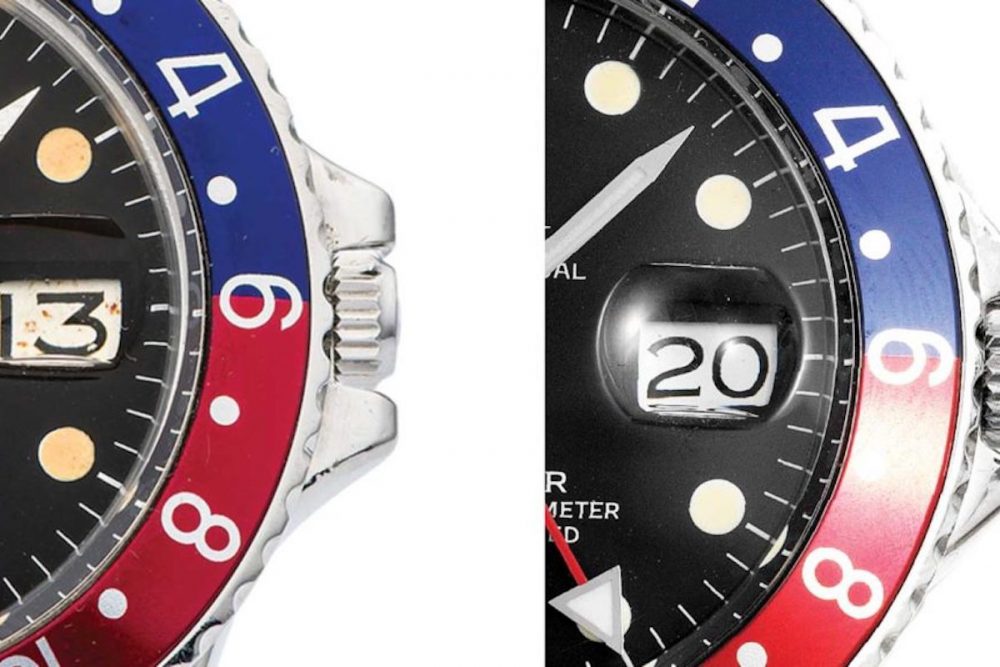 Rolex also introduced the aluminium insert as standard on the reference 1675. On the steel version the ‘Pepsi’ bezel was standard and on the yellow gold watch the insert was brown. The 1675 went through two crown guard versions too. The first iteration is referred to by collectors as pointed crown guards (PCG) or in Italian ‘cornino’. This was due to the thin and sharp profile of the guards. The later version is much thicker and rounded and can be referred to as rounded crown guards as per the lingo used for Submariners.

There were two striking additions to the GMT-Master family in the early 1970s. The first was the introduction of a two-tone GMT-Master in steel and yellow gold (reference 1675/3). This watch was available in two versions – a brown dial with half brown, half gold bezel insert and also with a black dial and all-black insert. Both watches were available on two-tone bracelets either Jubilee or Oyster. 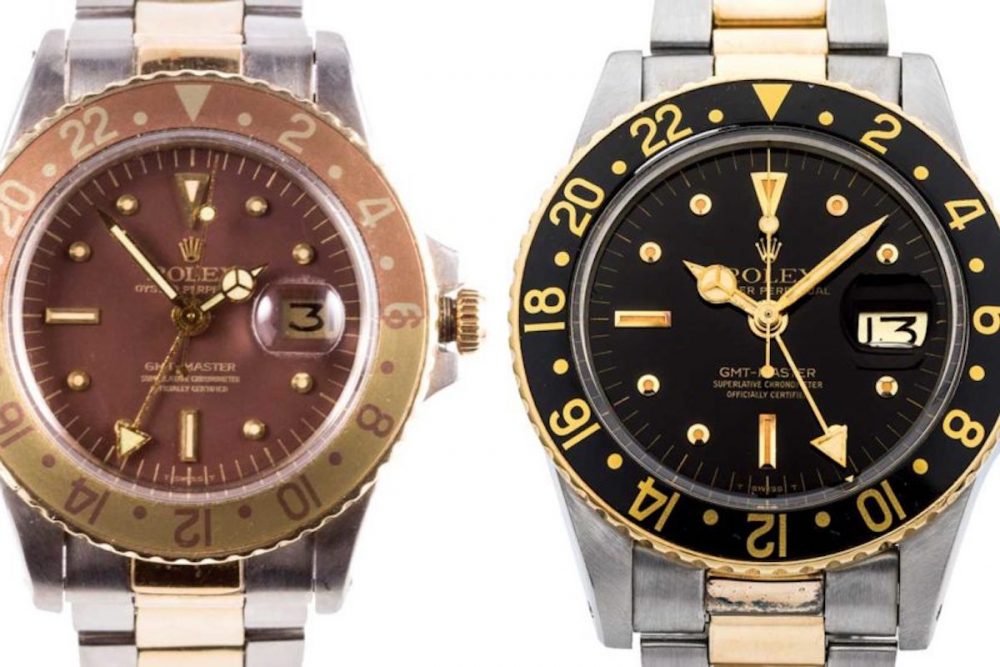 The second early 70s addition to the GMT-Master was an all-black insert for the steel watch. In the modern era of collecting vintage watches, there has become an almost as great focus on collecting rare parts; bezel inserts are of particular interest. It makes sense, of course, for the owner of a vintage steel GMT-Master to have both a ‘Pepsi’ and black insert to give the option to switch between. Two watches and two very different looks for the price of one (and an insert). Who wouldn’t love that?

The end of the 1970s and into the 1980s heralded an era now referred to as the ‘transitional’ period for Rolex. The brand began to introduce sapphire crystals, the quick set date function and a move back to glossy dials but with luminous filled white gold applied hour markers. The GMT-Master reference 16750 was introduced in 1979 and had a quick set date function. The matte dials were eventually phased over to the white gold surround hour markers dials.

In 1983 the GMT-Master was renamed the GMT Master II with the new reference 16760. The watch now had, as standard, a sapphire crystal, quick set date and glossy dial with white gold surround hour markers. The big innovation and the reason for the addition of the “II” in the name was a new independently setting 24hr hand (a quick-set feature). This was a big development in the line and made the watch a lot more versatile and able to monitor three time zones. The watch was housed in a much thicker case, to facilitate the thicker movement. Collectors have given this watch the nickname ‘Fat Lady’. An additional note of interest to collectors is that this watch has an early dial variation, where the word ‘DATE’ is omitted from the upper dial text. Small, but important details…that’s why we love vintage Rolex! 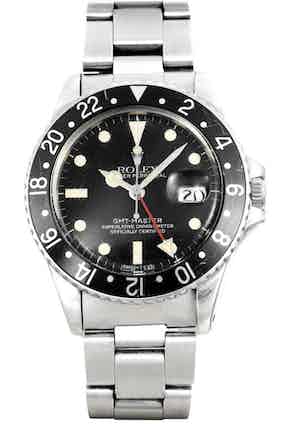 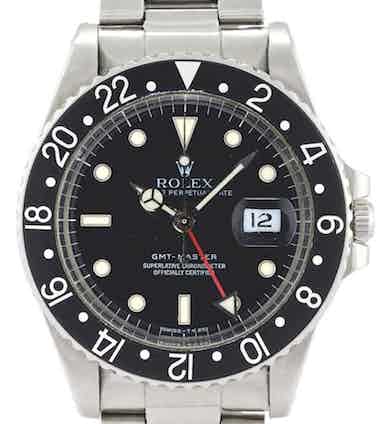 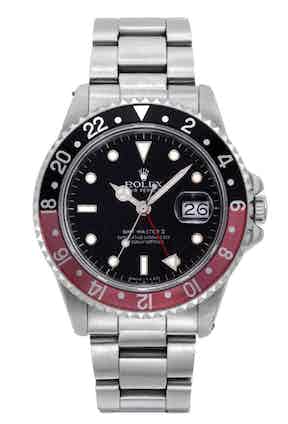 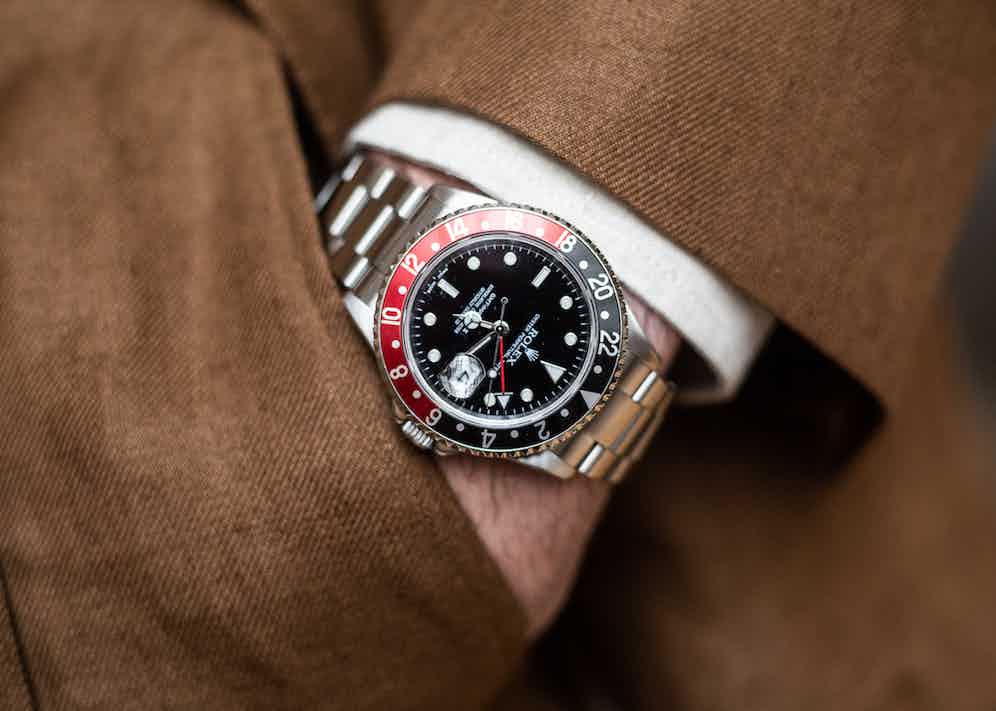 In 1989 Rolex updated the GMT Master 2 line with the reference 16710. This watch featured the new caliber 3185 (based on the base caliber 3135), which was very similar to the previous caliber. The most noticeable difference with the updated model was the slimmer case. This change in profile of the watch was welcomed by buyers, who had felt that the thickness of the ‘Fat Lady’s’ case was too much. The watch was a huge success and remained in the brand’s line up for 18 years until 2007. 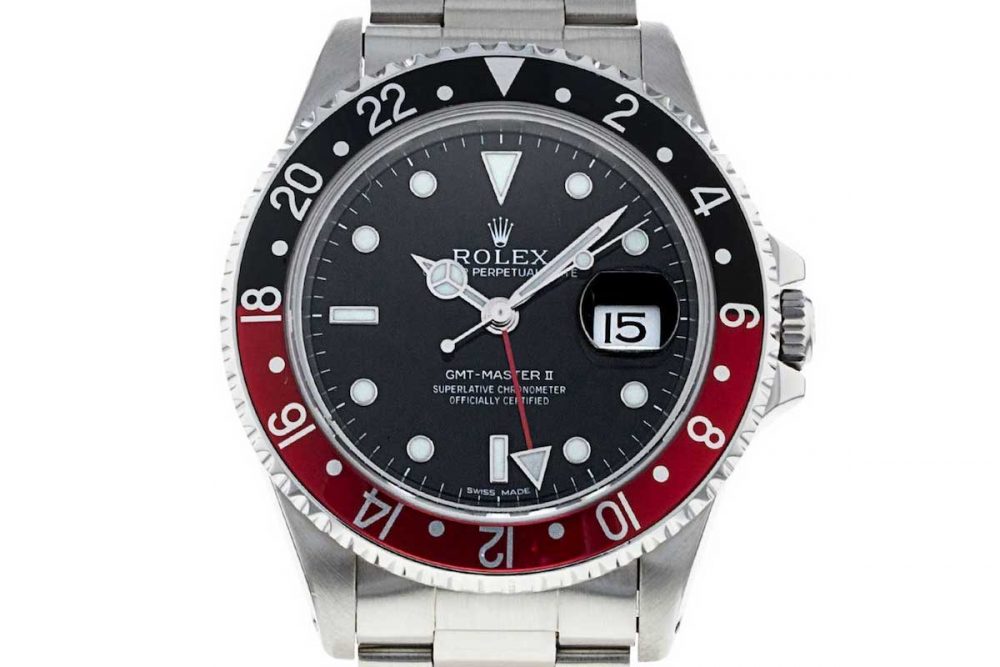 The third generation of the GMT Master was unveiled in 2005. The 18ct gold GMT Master 2 reference 116718 was a considerable departure from its predecessors with a remodeled case profile, with much heavier lugs and crown guards. The aluminium bezel inserts of the past 50 years were gone and in its place was a new all black ceramic insert with gold numbers. The watch was available in either black dial or green dial. A new green 24-hour hand on the black dial version complimented the “GMT MASTER II” text that was also green. On the green dial the text was all in gold and was complimented by a gold 24-hour hand. 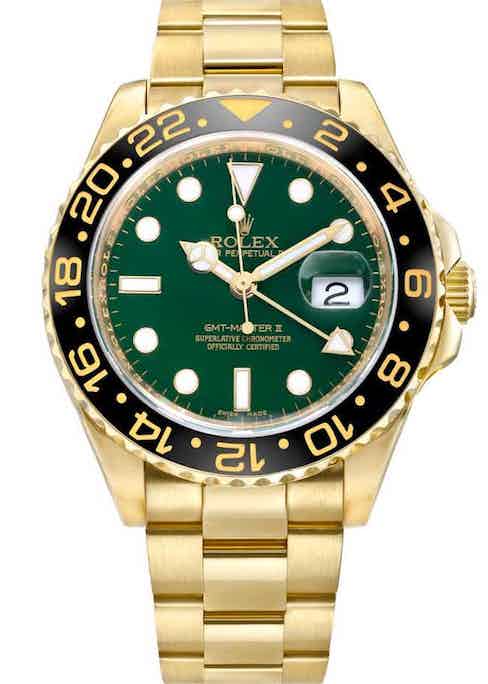 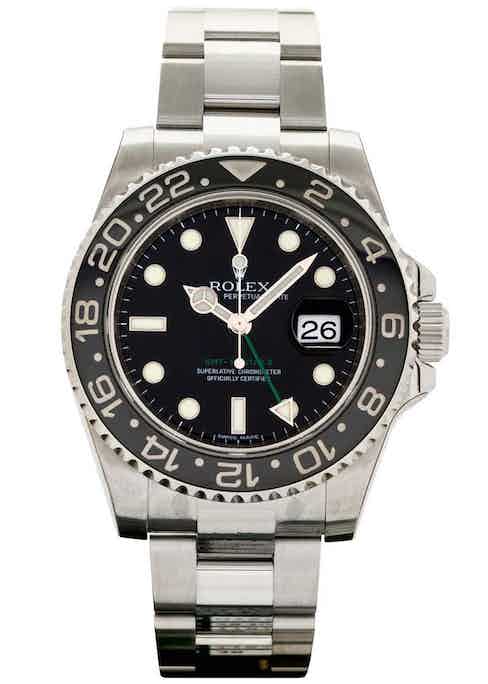 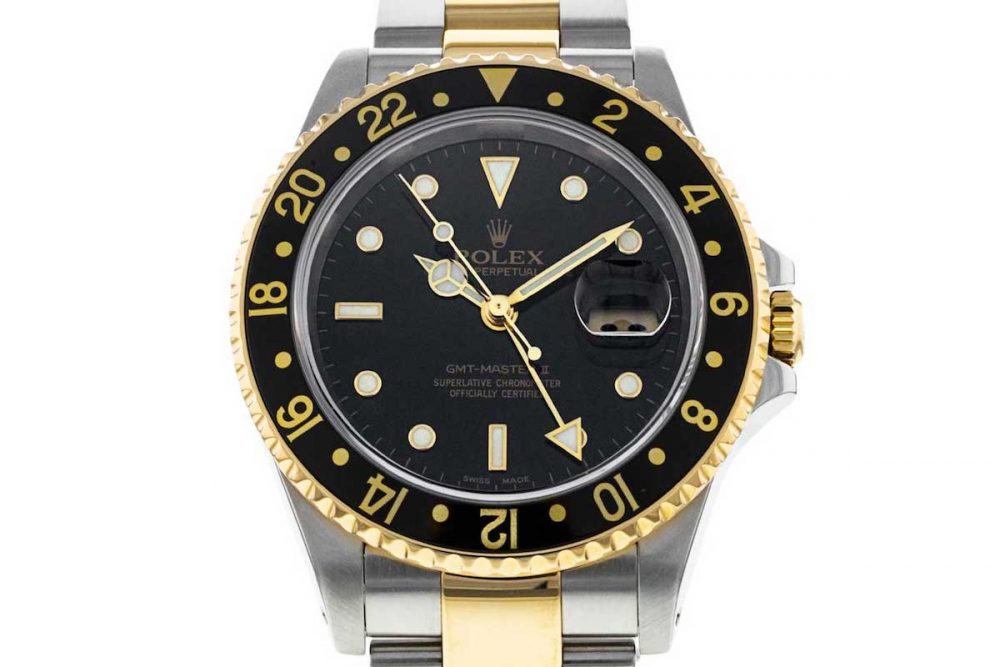 The development of the ceramic bezel was a big deal for Rolex and it took many years to perfect. Rolex named the material Cerachrom, which is an amalgam of ceramic and chrome (the Greek word for colour). The insert is baked at over 1600 degrees Celsius where it transforms into one of the most scratch and uv light resistant materials on the planet! One of the reasons that Rolex developed the Cerachrom inserts was to avoid the uv light-induced fading that had always occurred on their aluminium inserts on Submariners and GMT Masters.

At Baselworld 2012 Rolex unveiled the steel 117610 BLNRwith black and blue Cerachrom insert, where the black half represented night hours and the blue daylight. Finally, the brand had found a way to create a two-colour bezel. The black and blue worked well together and Rolex were proud of the achievement of mixing the colours, which was a significant technological feat that no other brand had managed to do. The watch was given a couple of nicknames by the collector community – The Batman was the most popular. 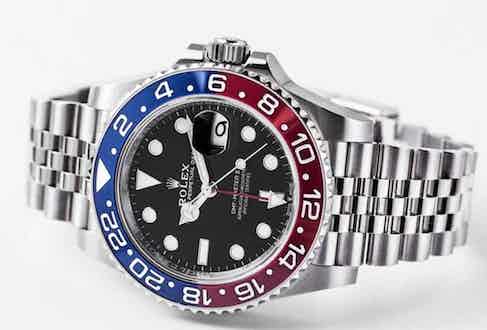 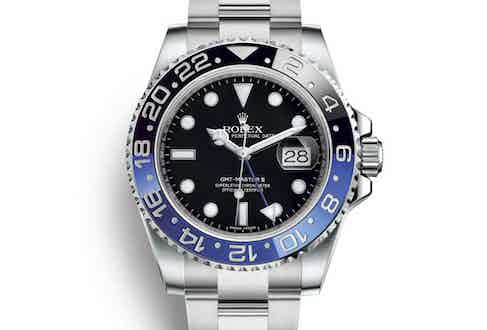 The Pepsi cerachrom bezel first debuted in the 116719BLRO – a white gold GMT Master 2 that really did have the heritage look of the ‘Pepsi’ bezel in a very modern sports watch. Then in 2018 the steel 126710BLRO was launched!