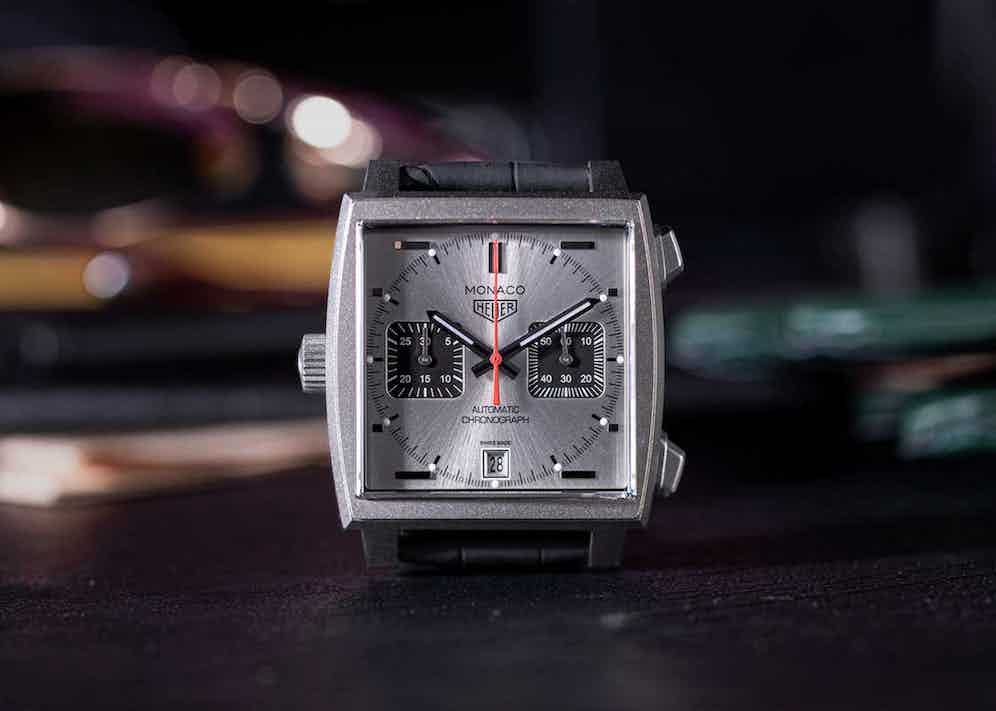 The (TAG) Heuer Monaco is one of the most iconic, significant and recognizable watches in the history of watchmaking. It is clear that Jack Heuer did not conceptualise it that way but in time and within his role as the head of the company, he took all the right decisions to put Monaco on a pedestal.

The story of the Heuer Monaco began in 1969 with the introduction of a square cased watch, which was water-resistant to 100 meters. Powered by Calibre 11, another great name from the 20th-century history of watchmaking, the Monaco with its peculiar shape and aura was all set to become an icon in the world of sports watches. 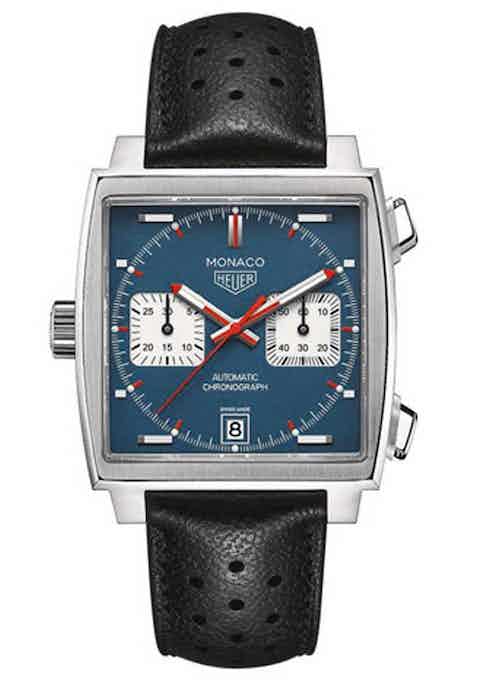 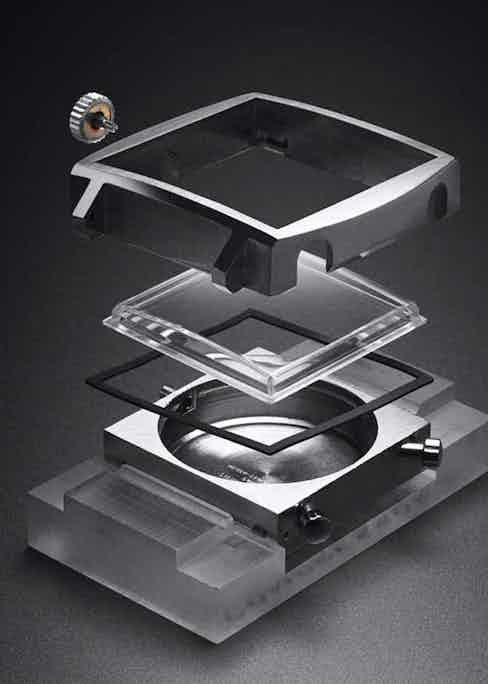 In 1969, Heuer in association with Breitling, Hamilton-Buren and Dubois-Depraz, unveiled the final version of what was called the "Project 99": the Chronomatic/Calibre 11 automatic chronograph movement. It was a formidable moment in watchmaking because that same year, both Seiko and Zenith introduced their own automatic chronographs, ensuing a fierce competition that forced Jack Heuer, the then head of the company, to make a difference with something more powerful. In the years leading up to 1969, Heuer planned to launch the Calibre 11 in the Carrera and Autavia collections but that wasn’t enough for Jack, who wanted to make a significant impact with his new movement. So he joined forces with Erwin Piquerez, a Swiss case manufacturer, who developed Monaco's water-resistant square case, a first for the industry then. Soon enough, Jack Heuer ensured the exclusivity of the design for Monaco and on March 3, 1969, Heuer introduced the world to the Monaco 1133B, writing the first chapter of its illustrious history. 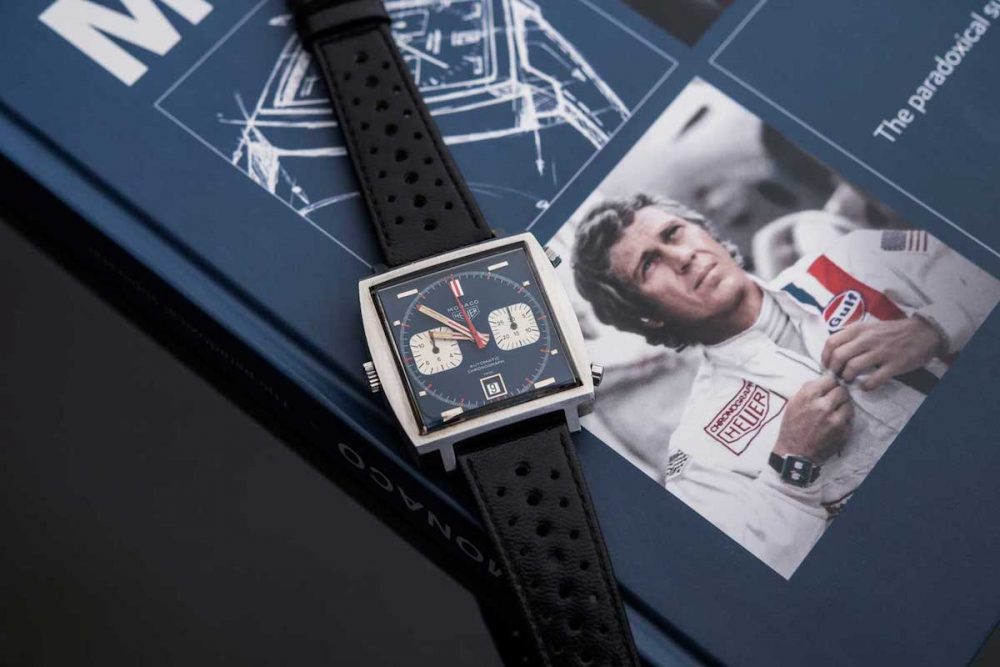 Enter “The King of Cool”

We all know that the Monaco rose to fame as Steve McQueen's watch featured in the 1971 movie "Le Mans". But this fact was preceded by another fortunate decision by the visionary Jack Heuer. Around the launch of Heuer watches with the Calibre 11, Jack established a commercial deal with his friend and Formula 1 driver Jo Siffert, a fan of Heuer watches and the brand's first ambassador. 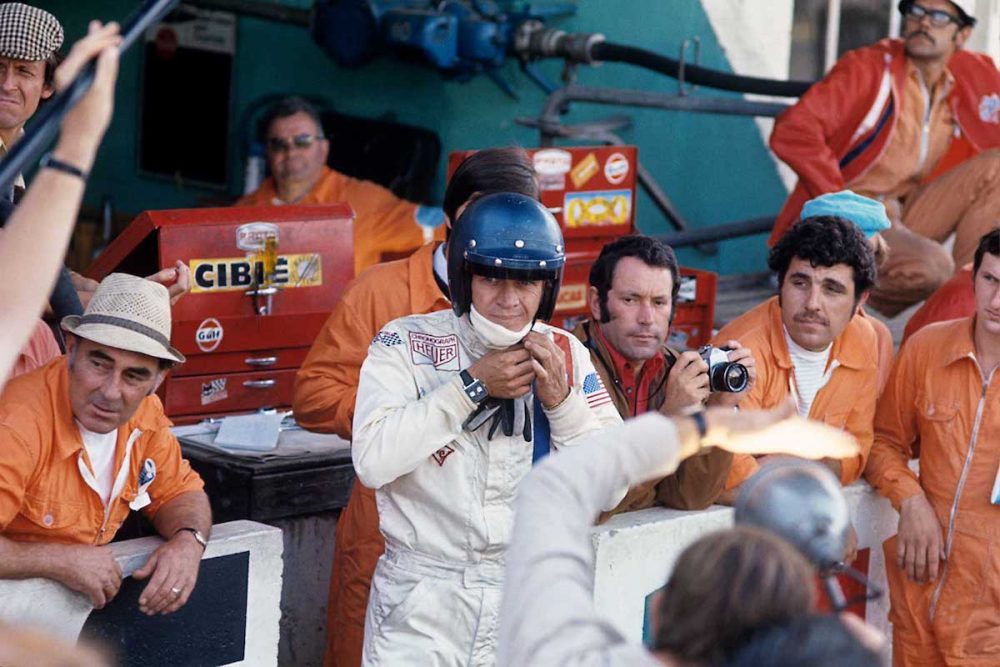 Steve McQueen styled like Joseph Siffert for the Le Mans movie, with a Monaco 1133B on his wrist (Image: Bernard Cahier) 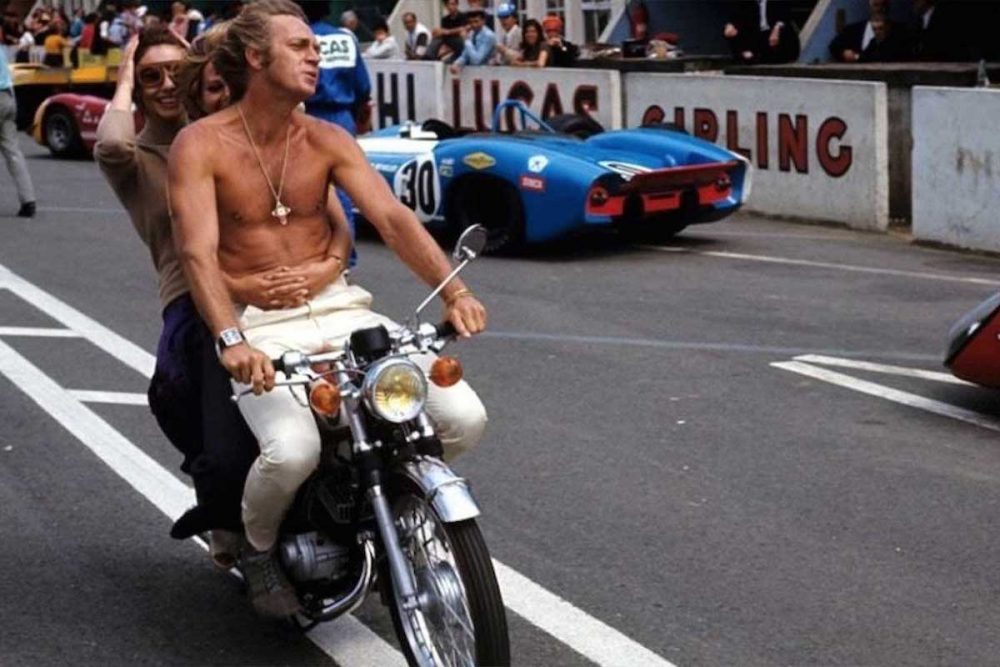 Steve McQueen out and about on the set of Le Mans on a motorbike, wearing the Heuer Monaco on his right wrist

In 1970, Siffert served as production support for "Le Mans", where he met McQueen, who was inspired to play the role of Michael Delaney, thanks to Sifferet himself. For the film, instead of using an Autavia, which was usually worn by Siffert, McQueen chose the Monaco 1133B for its unique and unconventional appearance. It was arguably one of the most critical decisions in the history of watch marketing.

Getting Better with Age

In recent years, the legacy of the original Monaco Calibre 11 has been represented by the base reference CAW211x. In 2009, on the occasion of the watch's 40th anniversary, TAG Heuer introduced the CAW211A. Limited to 1,000 pieces, the brand presented this special edition in the "McQueen" color scheme —blue dial with white subdials— a 38 mm case, the crown on the left side, and chronograph pushers on the right. The dial offered the classic horizontal indexes but the pushers became rectangular instead of round as seen in the original Monaco. The caseback had a unique decoration with Jack Heuer’s signature and the edition number. Hidden under this decoration was the in-house Calibre 11, a modular movement based on the Sellita SW300 and a Dubois-Dépraz module. This was a nice coincidence that echoes the original Calibre 11 and its chronograph module, a Dubois-Dépraz as well. 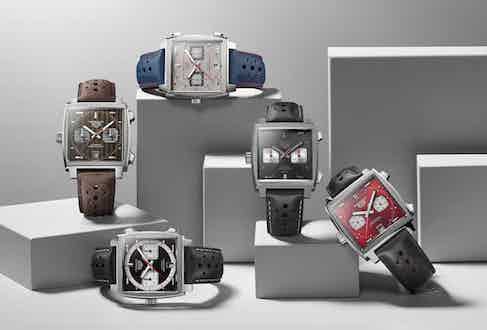 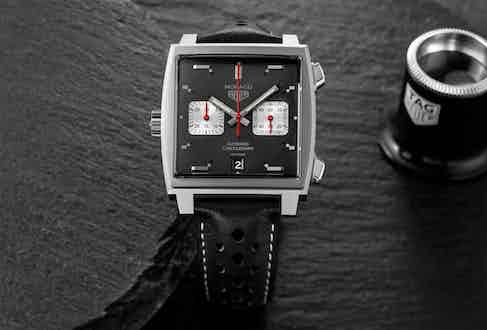 The general formula for the reissued Monaco Calibre 11 from 2009 has remained the same to this day. Only the colour variations in dials, cases and transparent casebacks have been the most important differentiating features from the 2009 'A' model. This includes the 50th anniversary special editions from 2019. 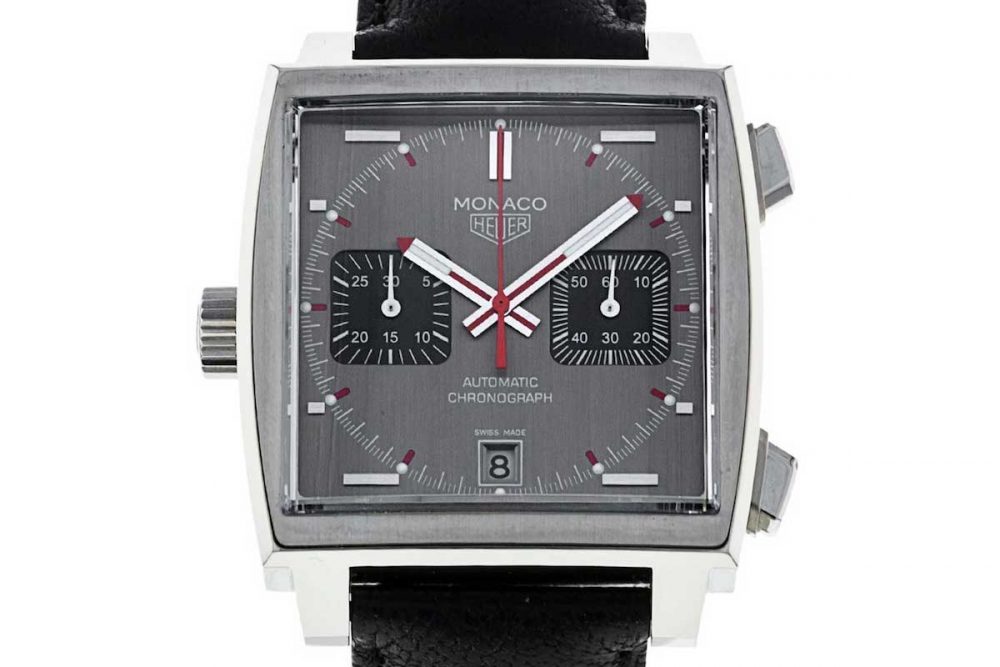 The Ref CAW211B is a grey version of the 40th Anniversary Monaco released in 2009. 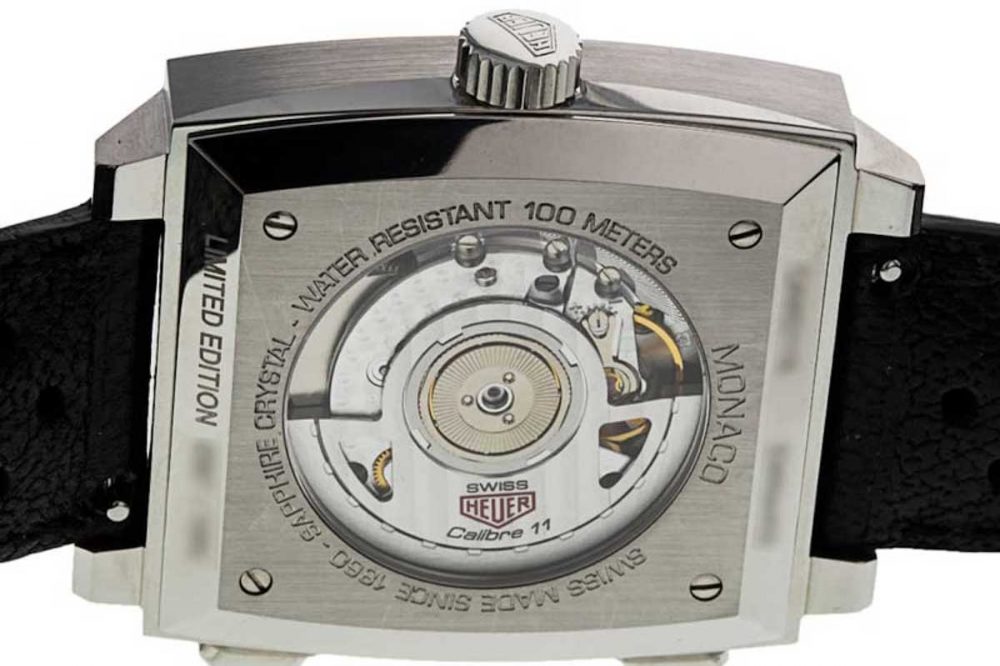 The watch is powered by Calibre 11, an ETA 2892/2 base with a Dubois Depraz Chronograph module

The references CAW211B and C are very good examples of the evolution of the TAG Heuer Monaco's Calibre 11 features. The TAG Heuer Monaco Vintage Chronograph CAW211B (2020) is a nice reinterpretation of the ref. 1133G from 1972. The 211B is just like the Monaco chronographs with which the brand commemorated the 50th anniversary of the watch in 2019. This implies that the size is already 39 mm. Very relevant, this vintage-inspired Monaco has the same horizontal hour indexes that were seen in the original 1969 Monaco and the 2009 reissue.

The Ref CAW211B is a grey version of the 40th Anniversary Monaco released in 2009. The watch’s case is finished in a subtle charcoal stainless steel and it is quite similar to the original design from the 1960s. It is powered by Calibre 11, an ETA 2892/2 base with a Dubois Depraz Chronograph module. The movement can be admired from the transparent caseback that gives a peek into the rotor with the traditional Cotes de Geneve finishing as well as the red Heuer shield.

The present example at our shop is from 2011 and the watch is offered with its original box and a two-year warranty from Watchfinder.