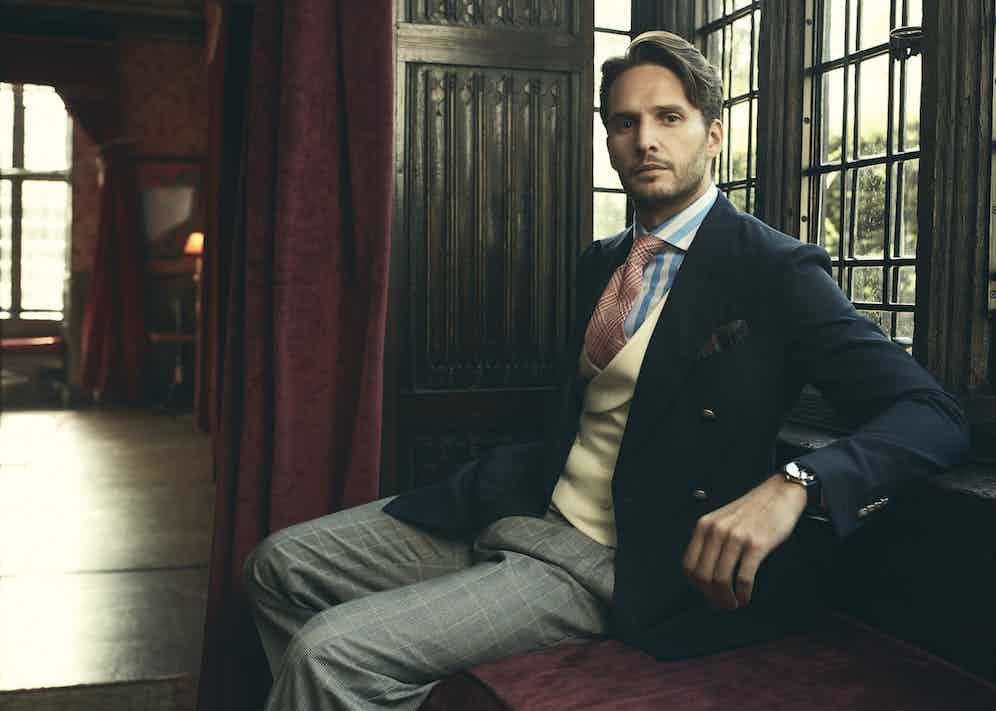 Men need trousers. This simple statement was key to the formation of Kit Blake, the tailoring brand I created with Richard Wheat that does not sell suits. When I looked at my own wardrobe one day and realised I had 10 blue blazers but only two pairs of grey flannels, I was forced to question the imbalance. The answer lay in the fact that I had become overly reliant on jeans. I adopted the smart-casual, jeans-and-blazer look in the late 1980s and had not really updated it since. Sure, I had refined it, and the blazer was often worsted spun cashmere and the shoes were from Crockett & Jones, but it was looking tired. I needed some new trousers.

Thoughts turned to the 1997 gangster movie Donnie Brasco, and specifically the scene in which Al Pacino criticises Johnny Depp for wearing denim in the Mafia community and chides him to “get some pants”. Long before I had my first suit, I remember getting my first pair of grown-up trousers. I was 10 years old and I just had to have a pair of Farah golfing slacks to be one of the cool kids in my primary school. I wore them with white socks (strongly influenced by the album cover of Michael Jackson’s Off the Wall), penny loafers and polo shirts. When I think back to that time, circa 1981, we must have looked like little old men in our cardigans and slip-ons (though now most adults dress like children in sportswear and sneakers). 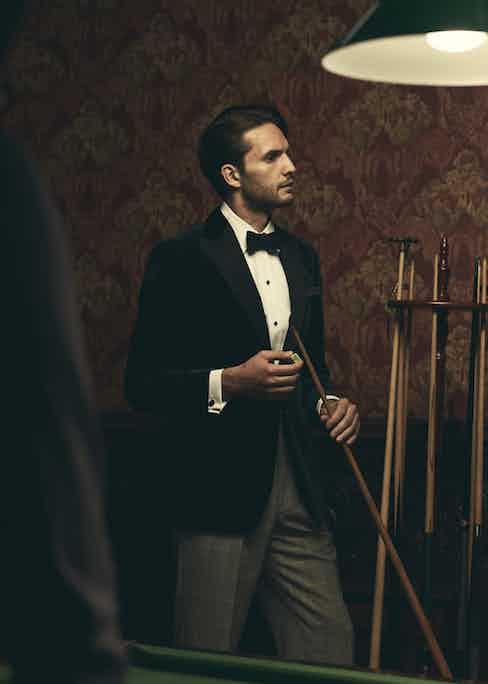 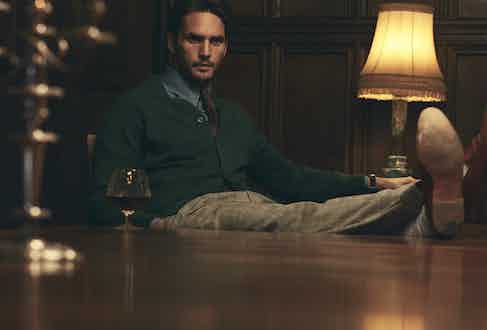 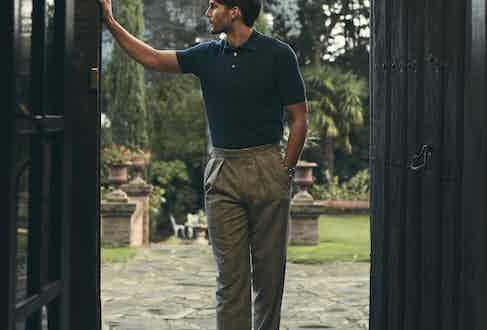 Grey flannel provides the template for the definitive odd trouser, and it became the core fabric in Kit Blake’s debut range because it complements any blazer or sports jacket. Our latest collection, that has only in the last few weeks dropped on TheRake.comalso comprises a selection of flannel in a variety of greys from dove-grey to biscuit-beige. Not to dissimilar from previous Kit Blake designs, they are full-cut English style trousers, with exquisite forward-facing pleats, whilst sticking to our high-waisted harmony, to accentuate the trousers' ability to fall charmingly from the hip. Asides from grey flannel, conversations we were having soon turned to Prince of Wales check. Richard and I have a fondness for the classic design, and Prince of Wales check is a remarkably versatile trousering — perhaps even more so than grey flannel. There are many PoW cloths available, in worsted, flannels, cashmere and tweed, but we wanted to make it our own. I commissioned a design with Lovat Mill in Hawick; I chose Lovat, who are best known for tweed, for two reasons: the modern PoW check is a direct descendant of a 19th century estate tweed, and they also create some of the most refined ‘travel’ cloths that have a cult status with sartorialists. I selected a super 120s worsted with a 4-ply warp and weft in a medium weight, the perfect cloth for a pair of year-round trousers that have the right combination of drape and resilience.

Combining check trousers with a blazer, particularly a proper double-breasted iteration, is a masterstroke. I first saw this combination when I entered sixth form at school: like a lot of schools in England, mine had a ‘business’ dress code, which required a tailored jacket and banned jeans. It was a period of sartorial experimentation, and the effort I put into my daily outfit compared with my studies was reflected in my final grades. But what I lacked in a classical education I substituted with my sartorial development. I recall there was an older pupil, who joined the sixth form from another school, who wore Prince of Wales check trousers and a four-button double-breasted blazer, black Chelsea boots, and long-pointed collared shirts. It was so classic, considered and cool. It took me a few years to find the courage and the right trousers to pull this look off, but it is now a favourite combination — and the signature look of Kit Blake. 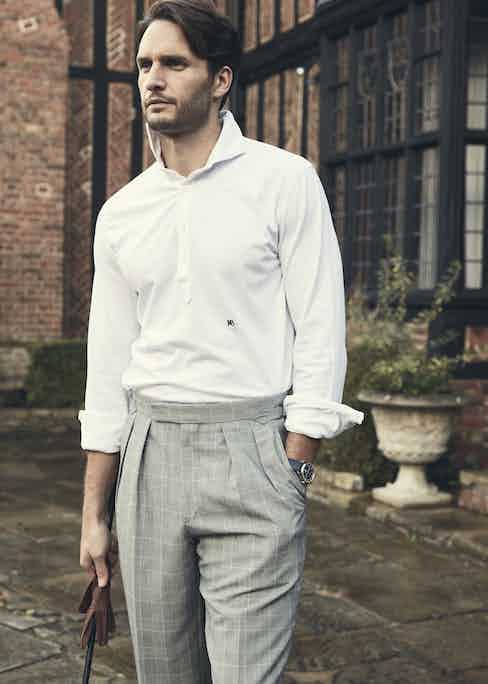 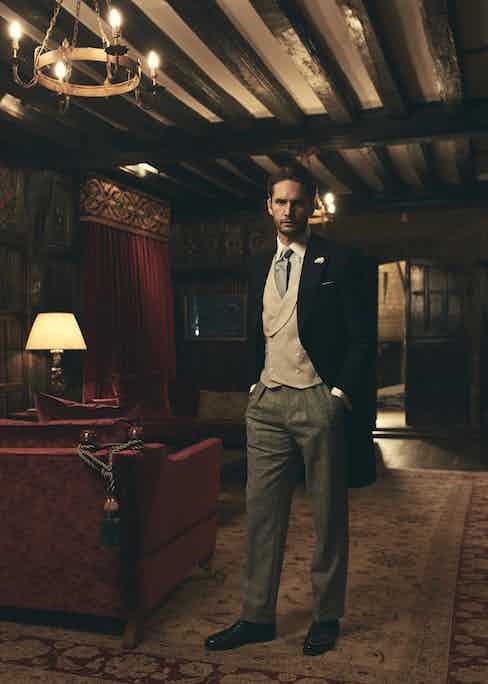 As for morning dress, wearing check trousers instead of ‘cashmere stripes’ is a rakish twist on the classic approach. Houndstooth and shepherd’s plaid are the most popular alternatives, but you could pay homage to Prince George, Duke of Kent and wear a Prince of Wales check trouser with a black morning coat and double-breasted vest. It would be, for example, spot-on for the races. It is interesting to note that ‘separates’ are considered smarter in morning dress — and that the all-grey morning suit sits behind black in the formality scales. Which brings me neatly on to business dress.

My poor grades at school didn’t afford me many career options, and I ended up working in a suburban bank. It was not an elegant institution, and it did not appear to have a strict dress code. Jackets were rarely worn, and it was the era of the cheap grey loafer and white towelling sock. I was summoned to the manager’s office for wearing separates on more than one occasion to be told that I didn’t have to wear a jacket, but that if I did so, it had to be made of the same cloth as the trousers. I stood there fiddling with my cufflinks while the short-sleeved manager rebuked me with pompous comments about sports jackets. Fortunately, with modern business demanding more travel, separates are now widely accepted, and a capsule wardrobe of jacket and complementing trousers is both versatile and elegant. 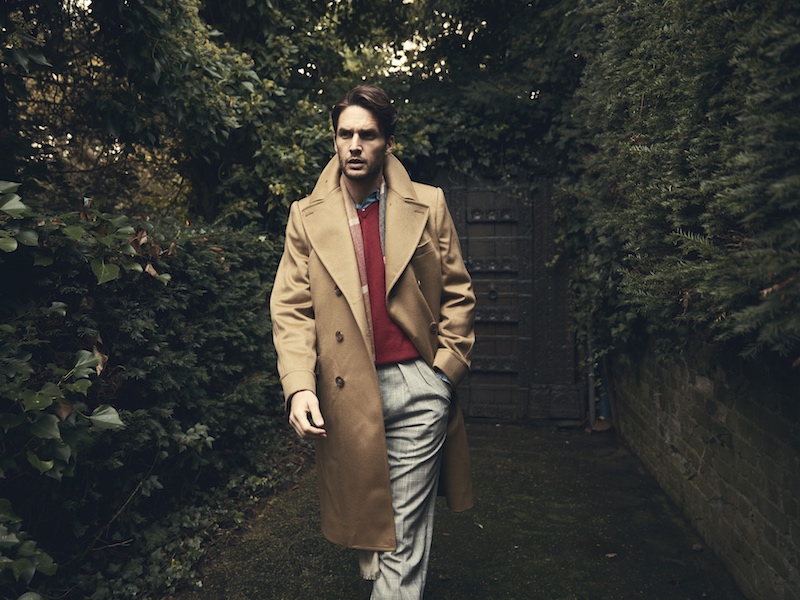 I first saw the combination of dinner jacket and Black Watch tartan trousers at Hackett, and it was my black-tie outfit of choice for two decades — partly because I liked the idea of subverting the dress code without resorting to novelty, but also for the pragmatic reason that I could usually find a good second-hand dinner jacket… But the trousers? I prefer to have new trousers. Certain people can be a little prickly about an Englishman wearing the Scottish textile, even when the generally accepted universal ones are worn. PoW check, however, could be considered an English tartan, and it combines well with classic dinner jackets in barathea or velvet. (And there’ll be no awkward conversations with whisky-fuelled clan chiefs.)

The skinny chino should be banned on anyone over the age of 25. Chosen as a smarter alternative to jeans, they are unflattering and uncomfortable. Simply upgrading to a proper pair of trousers will improve your look. A pair of pleated trousers that sit on the waist and require no belt is a simple addition to your weekend wardrobe. Wear them with smart sneakers and polos for the pub, while throwing on a bomber jacket in cooler weather. It is the simplest of wardrobe upgrades. Self-supporting trousers are great for travel (less fuss at security and no need to pack belts), and when combined with sock-less loafers or espadrilles and a good polo or resort shirt, they create a simple, elegant outfit for warm weather. (They can even be worn for golf: it has been a few years since I played, but I always preferred the comfort of fuller cut trousers.)

The range of ‘proper’ trousers now available to men is extensive, and as such there is little excuse not to invest in a pair or two. And if you need any more encouragement to actually wear them the next time you’re tempted to reach for your jeans, I will again quote Pacino’s character in Donnie Brasco and remind you: “This ain’t a fucking rodeo.”