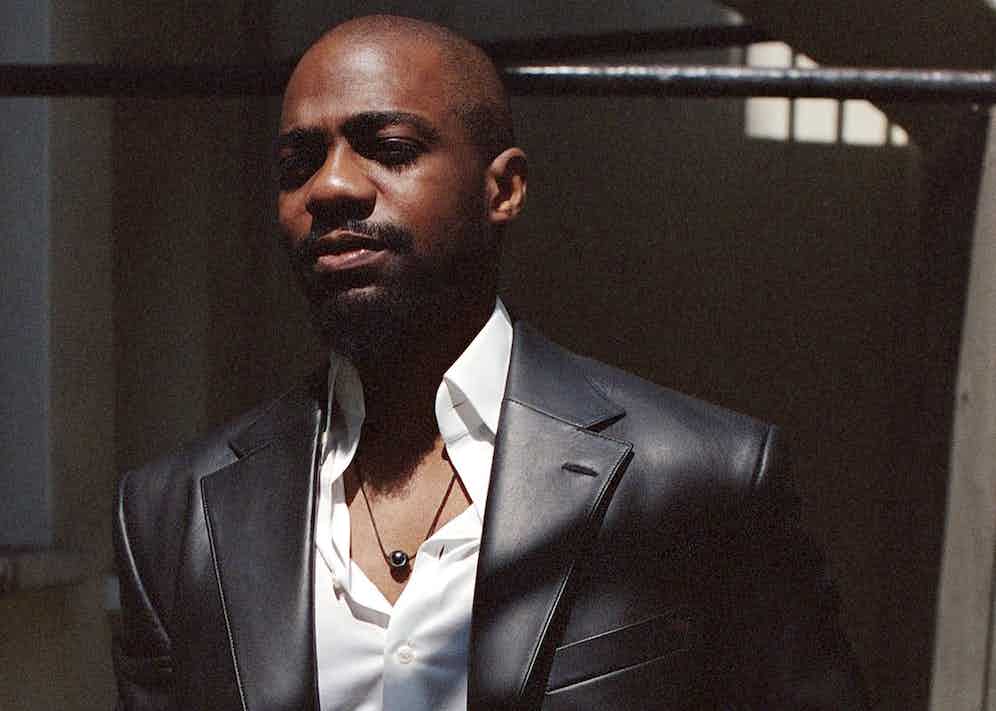 Michael Browne in the leather version of his body coat.

The characterisation of Constantin Brâncuși as the creator of an art form that emphasises clean geometrical lines balancing forms inherent in his material with the symbolic allusions of representational art perfectly encapsulates the tailoring vision of Michael Browne. For it is Browne who has achieved what the Greeks referred to as the infusion of anima, or ‘spirit’, in normally lifeless cloth to endow it with a sense of living dynamic energy. Browne does this as Brâncuși did in his sculpture — not through embellishment but through the reductionist language of clean, fluid, purposeful tailoring brushstrokes augmented by inordinate handmade details that make his clothing feel alive and as though it is bristling with energy. His are garments that are informed by velocity, embodiments of the Italian poet Filippo Marinetti’s Futurist Manifesto, and fittingly worn by men who are in perennial movement in their kinetically charged, ascending trajectory in life.

But he is not without his progenitors. If you wanted, you could trace Browne’s storied tailoring pedigree back to London in the Swinging Sixties, when Tommy Nutter and Edward Sexton redefined the codes of bespoke tailoring by connecting it to the fabric of contemporary culture and rock ’n’ roll. These enfants terribles took the sartorial universe by storm by cutting dazzling finery for the likes of the Beatles and Rolling Stones, and later Bryan Ferry, that was equally distinguished in its priapic, fertility-symbol styling and its otherworldly tailoring elan. While Nutter supplied the stylistic acumen, it was Sexton who elevated their clothes beyond louche rock ’n’ roll uniforms to couture-level tailoring works of art. Sexton’s protégé, a man of remarkable skill, was a then young Joe Morgan, who would later strike out with fellow cutter Roy Chittleborough to set up their eponymous house, Chittleborough & Morgan. 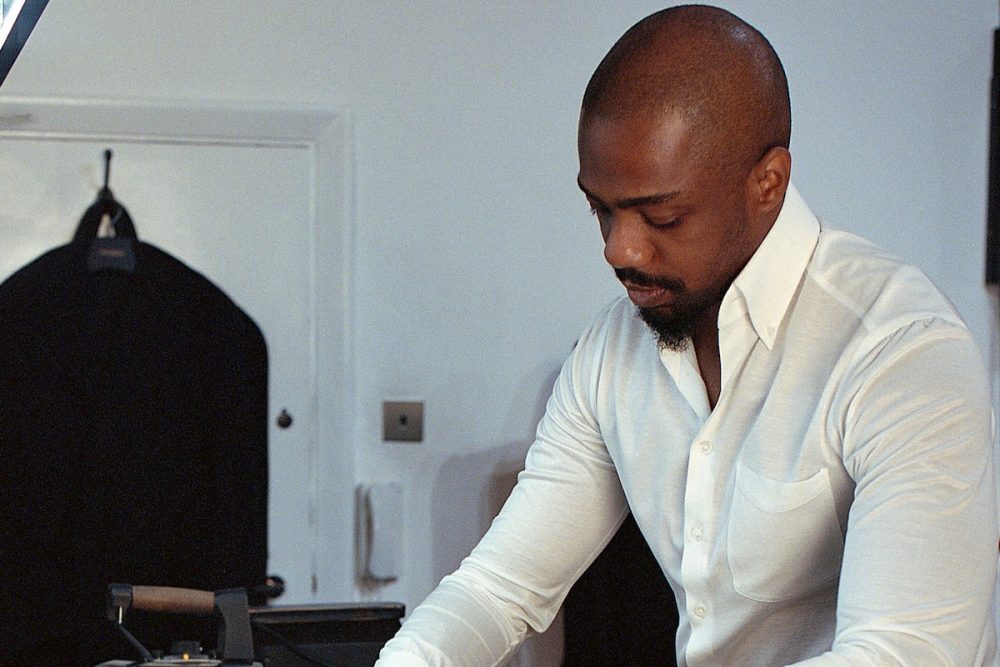 It was as a client of the great Joe Morgan that I first met Michael Browne. Amusingly, I was in the midst of showing Joe the details of the Milanese buttonhole on my Camps de Luca jacket. What I loved was Morgan’s openness to internationalising the language of Savile Row tailoring, and it would not be long after that he started including these buttonholes not just in the lapel but throughout his garments (something even the Milanese don’t do.) His primary collaborator in this creative process was Browne, for whom I already had tremendous affection as one of the most stylish and nicest men in tailoring. To be fair, despite his genteel and self-effacing manner, it is hard not to notice Browne, for he is one of the most handsome and charismatic individuals I’ve met. But as well, there is the way he wears clothes — with the effortless bearing that makes you think he was born in a lap-seamed, roped-shoulder, three-piece suit. You could already see that, while he had learned his craft alongside Joe Morgan, he was beginning to define a clear, strong and vibrant language of his own, in the same way that Morgan’s clothes paid tribute to but were unique from Sexton’s and Nutter’s. They were similar to Morgan’s in exhibiting a couture-level obsession with perfection of detail. But Browne wore his clothes in a very different way, which was informed by a young, urban relevance representative of his generation.

“I could see this huge resurgence in the interest in bespoke tailoring,” Browne said. “But at the same time men wanted to wear their clothes in a different way. One of the first things I began experimenting with was what I call a ‘body coat’. This is really a fusion between a top coat and jacket. It’s a long, lightweight coat that combines the swagger of the top coat with the closer fit of a bespoke jacket. I started making them because so many of my clients wanted them. A lot of younger guys will wear jeans and trainers or boots and light knitwear. They don’t want to wear a jacket and an overcoat. They don’t want to be bothered to check their coat.” As an aside, I explained to Browne that no self-respecting New Yorker would ever check their coat, out of a combination of impatience and fear of having it stolen. Browne laughed and continued: “Exactly, they want one star piece to their ensemble. They can wear their body coat directly to the dinner table or keep it on at an art gallery opening or a party. It has inner pockets for their phone and wallet, just like a jacket, and it’s made with a lighter construction and fabric so that it’s comfortable indoors. You always look both relaxed but dressed.” The point he was making with his typical humility was that with this coat on, no matter where you are, you just look fucking cool. 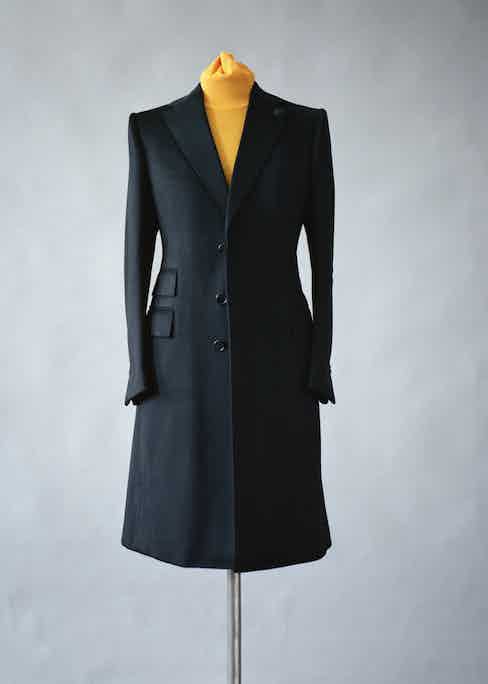 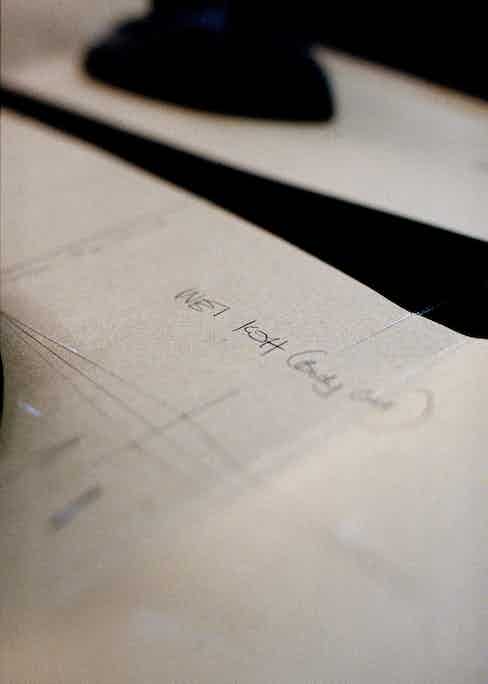 And now for an oblique sartorial non sequitur. Around 1870, a trim, young, Pennsylvania-educated dentist set out for the American south-west in the hope of curing his tuberculosis, an ailment that had afflicted him since the age of 15. There he became a professional gambler and gunfighter of some repute. He struck up a friendship with a lawman named Wyatt Earp and saved his life on several occasions. In 1879 he participated, along with Earp, in the 30-second gunfight at the O.K. Corral that has become a seminal part of western lore. The sobriquet he was bestowed was that of ‘Doc Holliday’, and he was immortalised more than a century later with an Academy Award-level performance by Val Kilmer in the highly entertaining escapist fare that is Tombstone. I bring this up only because the signature garment the Earp brothers and Holliday are dressed in throughout the film, as they dispatch gun-toting villains, is the western gunfighter’s frock coat, a dandified adaptation of the military frock coat. Often worn with a waistcoat and a tie, this iconic garment bears an evocative similarity to Michael Browne’s cashmere body coat. So much so that I would imagine myself with twin Walker Colts strapped to my thigh like the Outlaw Josey Wales each time I donned it. This seemed to amuse Browne considerably during our fittings, by which point I had re-dubbed his svelte, lithe body garment the ‘Sartorial Gunfighter Coat’. 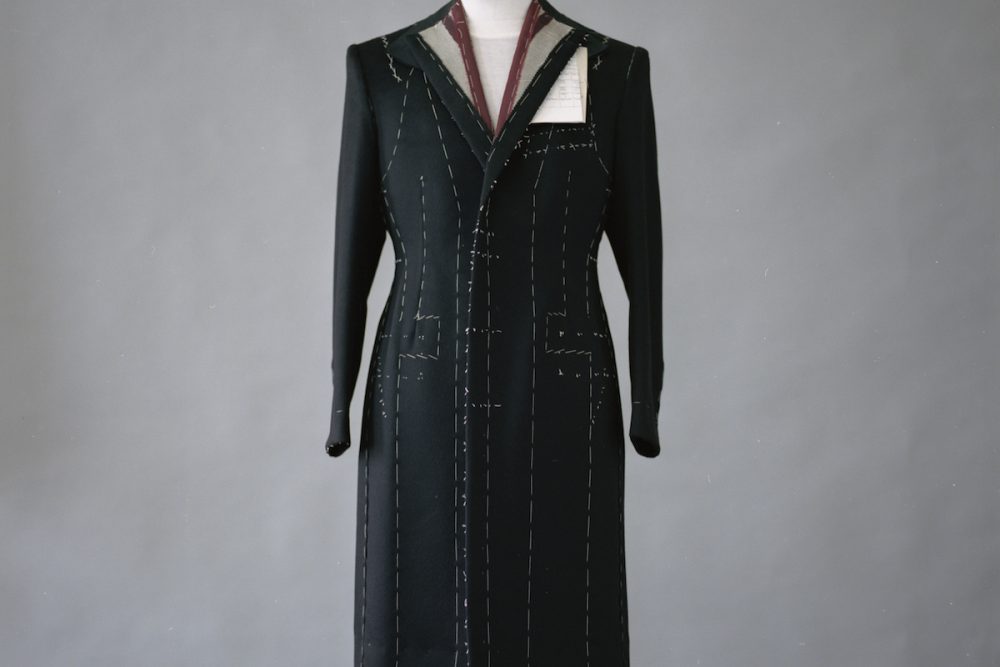 The coat features a notch lapel with the high gorge placement Browne is fond of, and of course a Milanese buttonhole. It is accompanied by a silk tone-on-tone boutonnière that has become Browne’s signature. The shoulders are roped while the sleeves are neat and slim. The body of the coat is fitted with a high waist and an artfully flared skirt. I opted for three buttons and slightly more closed front quarters, though Browne traditionally makes it with two buttons and more open front quarters. Pockets are without flaps, to add to the neatness, and the coat ends below the knees.

The finishing is, as you would imagine, sublime and God-like. Having owned it for the better part of a year, I find it the perfect garment for urban environments like New York, where you are constantly on the move and need to be comfortable but still want to look dressed. It’s perfect when running down the stairs to catch a subway or jumping in and out of cabs, yet it lets you merge seamlessly into the most erudite milieus. It provides a fantastic heroic swagger yet has all the pragmatic ability to retain your valuables, and it still works for the most part indoors, save for the most overheated antechambers. It is best paired with knitwear and works equally well with braced-up dress trousers and dress shoes or jeans and boots, in particular of the Urban Commando variety as made for us by Norman Vilalta and Gaziano & Girling.

Since his early years on Savile Row, Browne has decamped to Berkeley Square, where he crafts his signature couture-level garments for a loyal following. If experiencing clothing made at the highest level imaginable is your thing, Browne’s your huckleberry.