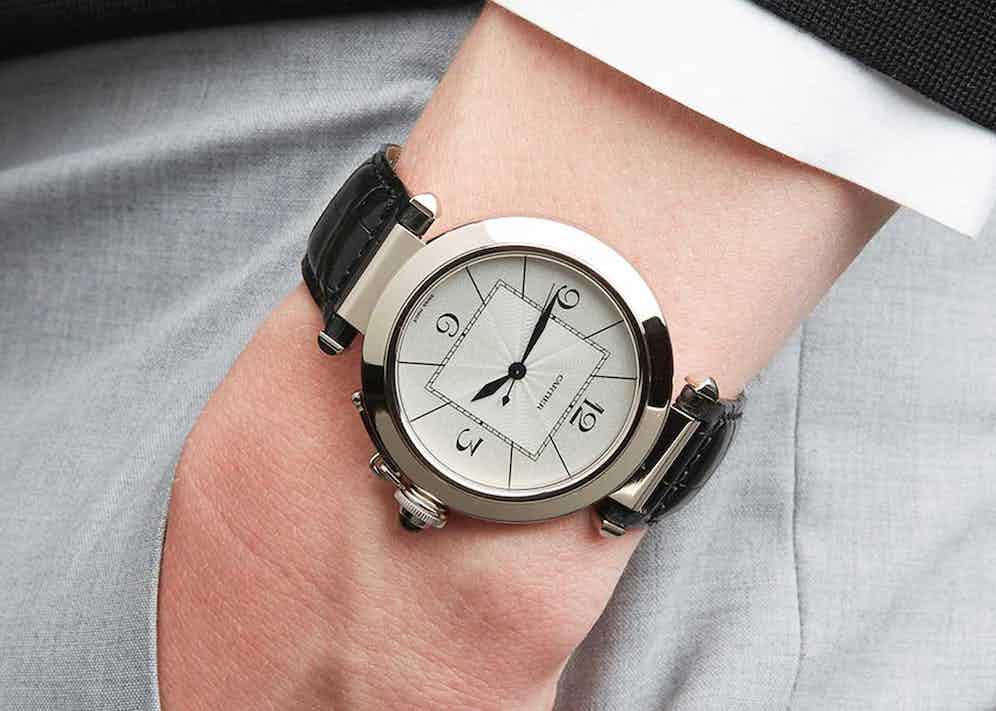 There are many watch brands that are hot at the moment, but one particular house has enjoyed a steep trajectory over the past few years becoming one of the most talked about in both modern and vintage collecting circles. That brand is Cartier and today we are sharing a new selection of watches from our partnership with Watchfinder that takes in three of the brand’s most iconic lines; the Santos Galbee, Pasha and Tank Solo.

Ok, let’s get this out of the way so there’s no confusion. A Cartier Santos, or Santos de Cartier, is a watch on a bracelet featuring screws on both its bezel and its bracelet. While it was clearly derived from the Cartier Santos-Dumont — the very first known luxury men’s wristwatch designed for Alberto Santos-Dumont by his friend Louis —it was actually conceptualised by a legend in the watch industry named Alain-Dominique Perrin, Cartier’s CEO from 1975 to 1998. Understanding that he was at the helm of Cartier during a turbulent era beset by both the Quartz Crisis as well as the OPEC Oil Embargo and the global economic recession of 1973 to 1975, he knew he had to think out of the box. 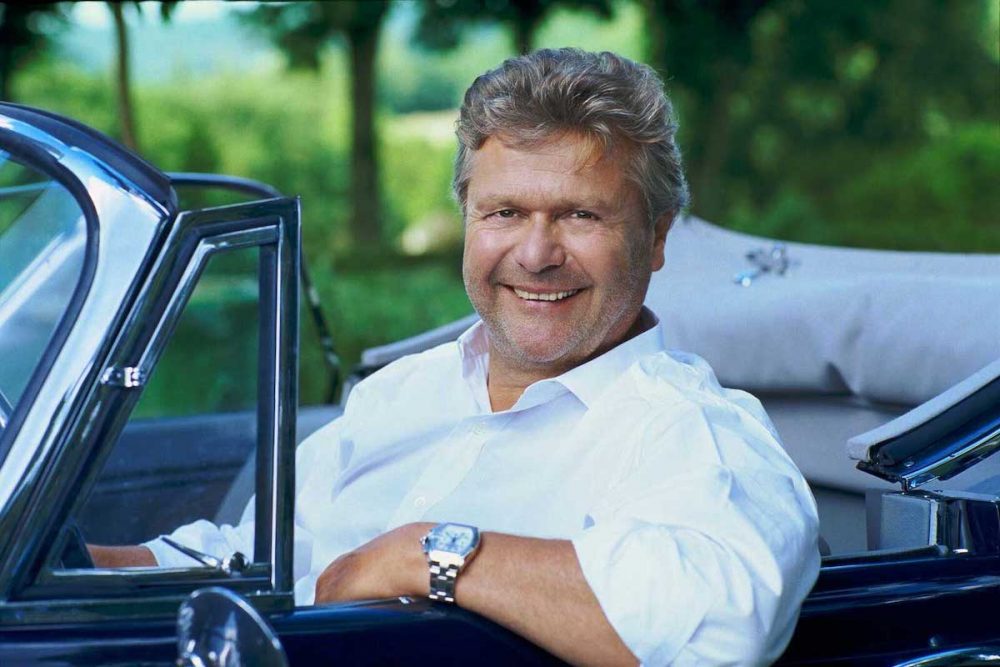 Riding on the massive hit represented by the Le Must de Cartier watches — the brand’s lower-priced diffusion line— launched the year before in 1977, he introduced a revolutionary new wristwatch named the Santos in 1978 with the objective to connect the design language of Cartier to a whole new generation. Perrin wanted to do something truly audacious in the context of Cartier’s history and that was to make a watch in steel. However, he always wanted the watch to allude to the grandeur of Cartier, and he understood that the modest yet strategically applied use of gold elements could both elevate the perceived value of the watch and also create a bold and easily identifiable visual signature. As such, he fixed a gold bezel to the watch contrasted by steel screws; and then, in a brilliant design stroke, used the inverse pairing of gold screws on the steel bracelet, and ushered in the era of the two-tone dress watch. 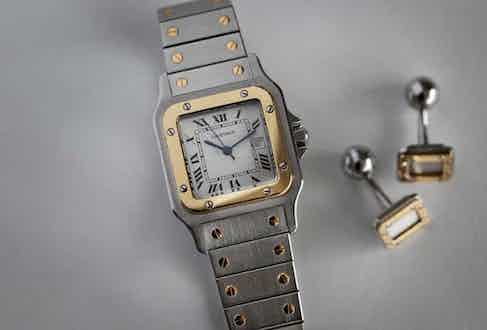 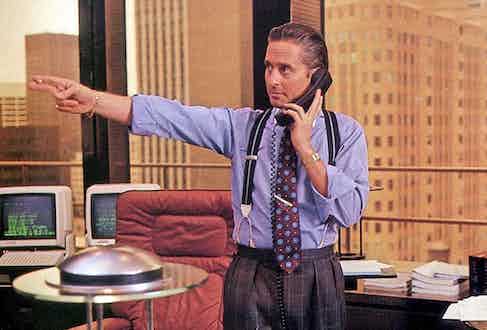 The result was one of the most iconic watches in history and a runaway success for Cartier. In 1987, with Perrin still at its helm,Cartier introduced the Santos Galbee (a word that literally means curved or shapely), which slightly enlarged the dimensions of the case and softened the edges of the watch to give a highly appealing sensual shape. This is the watch in yellow gold that Michael Douglas wore in Wall Street and which became synonymous with wealth and style during the economic boom of that decade. Considering the fact that the movie was only released that year, this means that the film had access to a prototype far before the launch. I had the pleasure of working for Alexander Kitman Ho, the film’s producer, and I recall him saying, “Everything in the film was meticulously selected by Oliver Stone. The cigars were Davidoff, but they had to be Cuban Davidoff. The suits were made by the incredible Alan Flusser. The watch had to be a Cartier.” 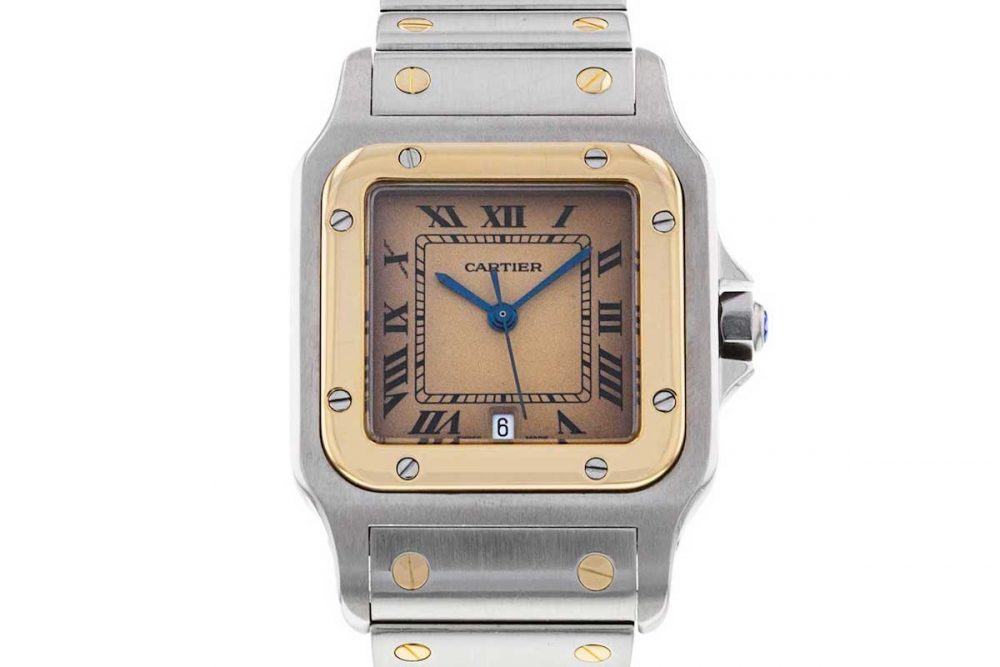 The present example of the Santos Galbee in our shop is from 1990 and it comes with its original papers. 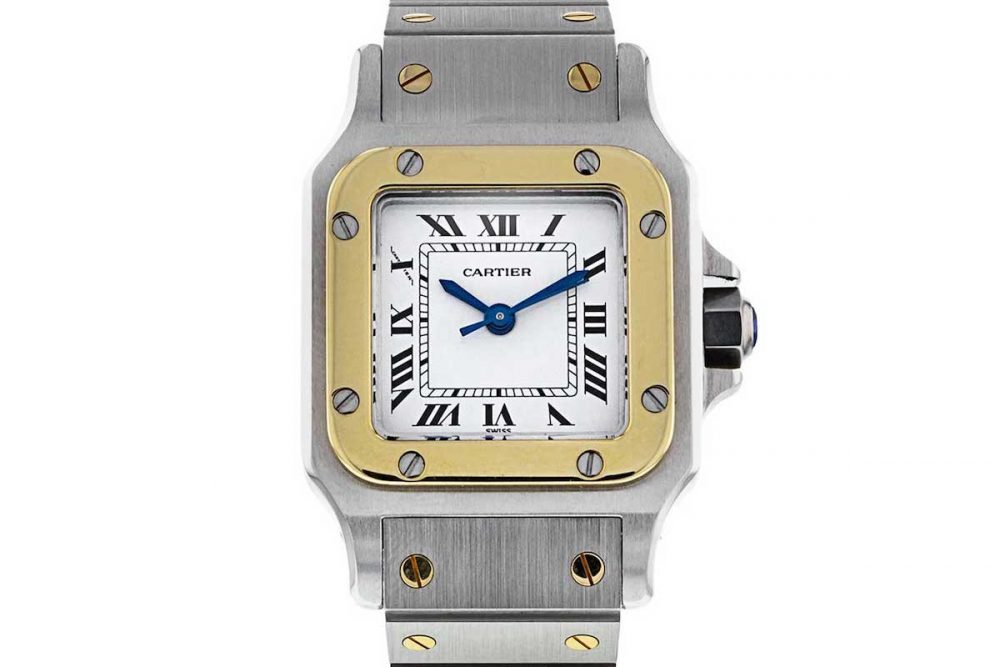 The present example of the Cartier Santos Galbée in our shop is from 1996 and it comes with a two-year warranty from Watchfinder. 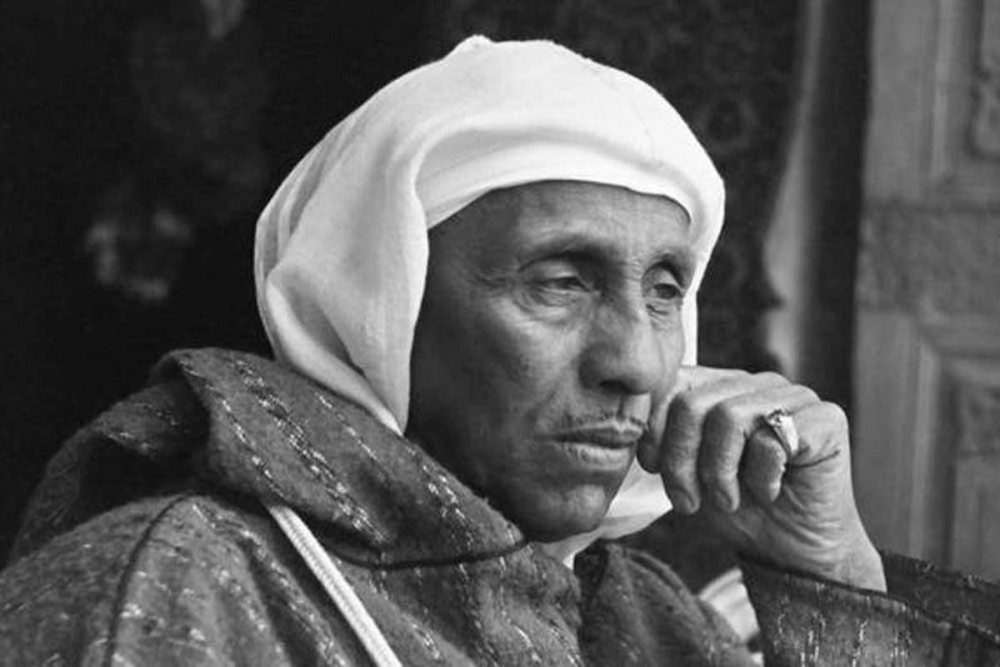 Now let’s go back to the ’80s when Alain-Dominique Perrin was at the full height of his creativity. It was clear that there was a market for waterproof luxury watches, with timepieces such as the Ebel 1911 Classic Wave rising in popularity and the solid-gold Rolex Submariner taking a dominant stance.

Cartier took the mythology of the Pasha and asked Gérald Genta to manifest a vision of this timepiece. And in 1985, the Pasha de Cartier was born. It was a massive 38mm watch with a thick case, stylised centre lugs with cross member-like end pieces and a very cool screw-down cap that covered the crown and provided water resistance. This system was actually derived from water-resistant military watches from the ’30s and, as such, was a wonderful stroke of creativity. 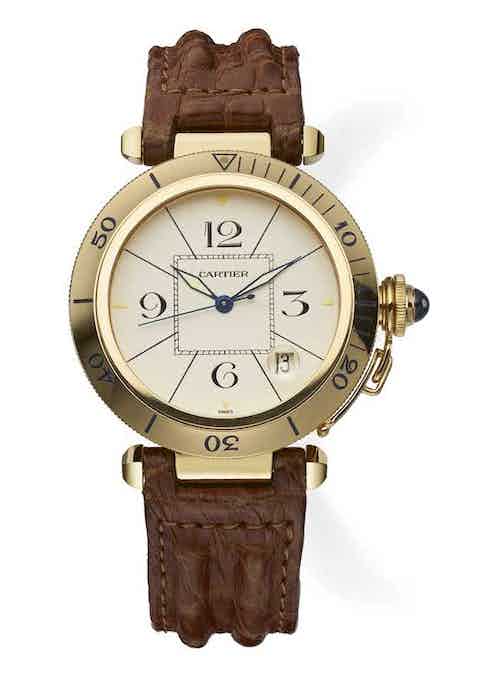 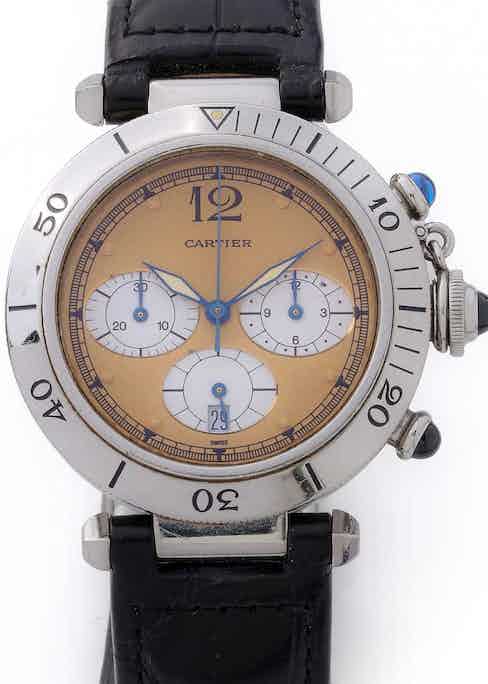 The Pasha was, of course, a massive hit and was soon made in a truly heady variety of models: the Pasha Perpetual Calendar (using a Génta movement); the Pasha Seatimer with a rotating bezel; the Pasha “Golf”; and my personal favorite, the Pasha Grid, which features a grid-like protection over the crystal which was also gleaned from military watches of the era. This, on the delicate brick “Figaro” bracelet in yellow gold, was a work of ravishing, opulent decadence. 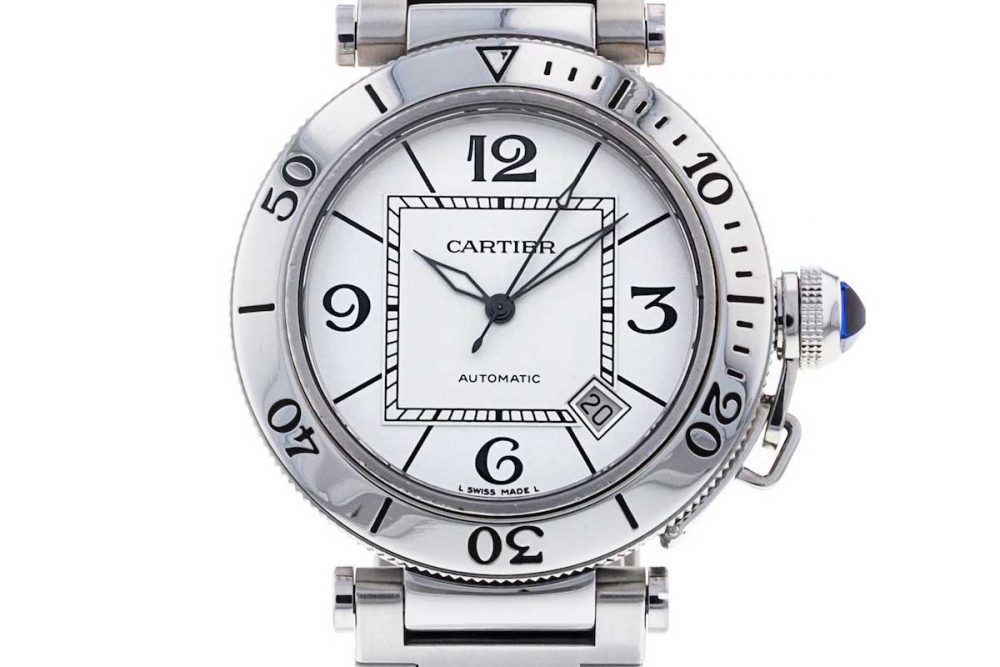 This Pasha Seatimer from 2007 is a self-winding automatic watch that features a 40mm stainless steel case surrounding a silver dial. 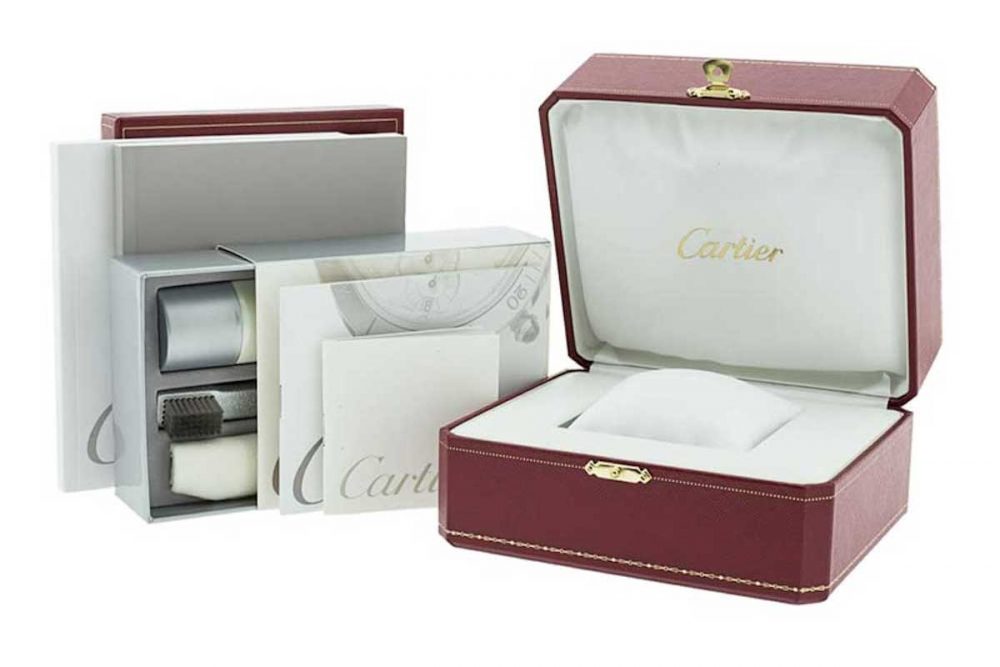 The watch comes with its original set of box and papers and a two-year warranty from Watchfinder. 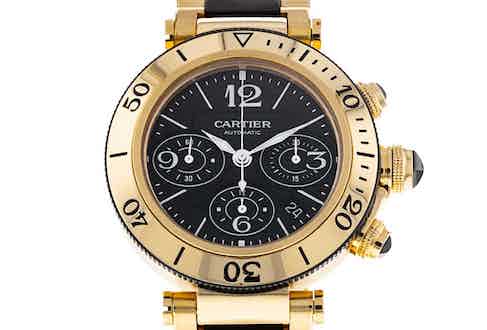 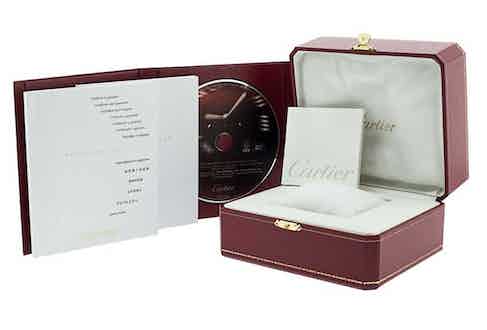