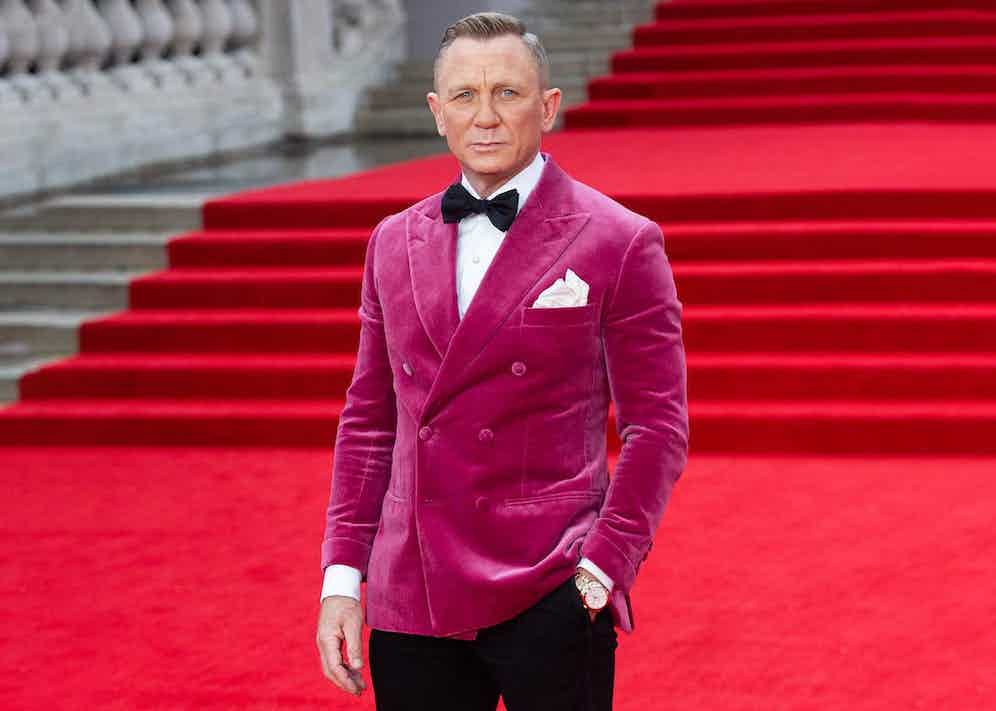 Omega has been a staple on the super spy’s wrist since 1995’s GoldenEye, and while the partnership has been phenomenally successful, the meaning goes deeper than mere marketing hype. Lindy Hemming, the woman who dresses Bond explained the significance of Omega thus: “I was looking for a watch for Pierce Brosnan. I think that for a military man a watch is such a vital piece of equipment. My father was in the RAF but he had many friends that were from the Royal Navy. Many of them wore and spoke very highly of their Omega watches which they treasured as important parts of their life in the military. As Bond was a Naval Commander, I thought that he should wear an Omega.” 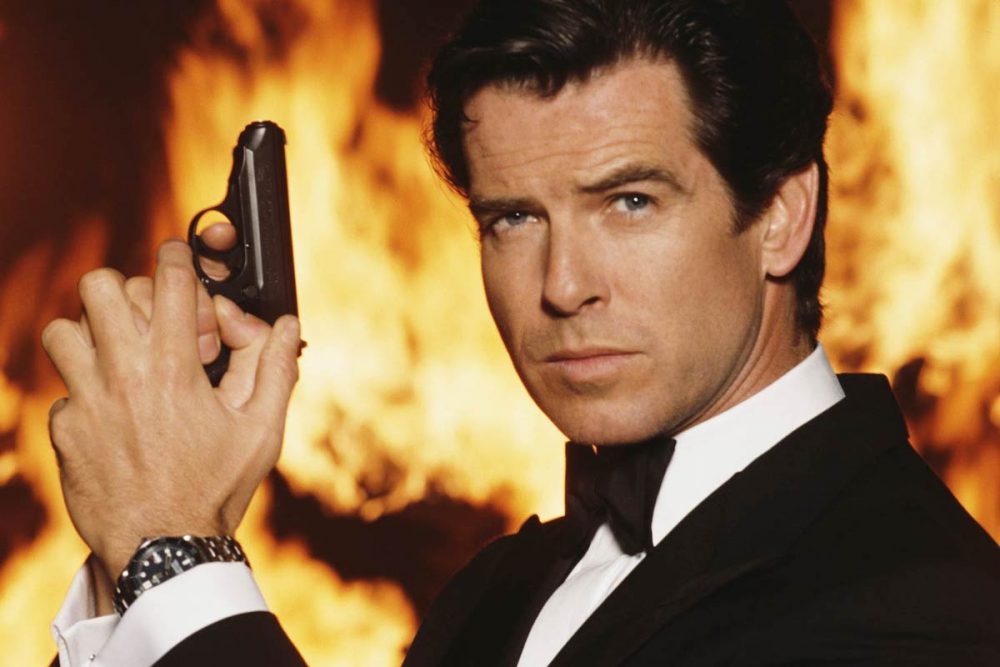 Pierce Brosnan posing for a poster for the 1995 Bond instalment, GoldenEye

With that in mind, join us on a 26 dive into the shared history of the Omega Seamaster and James Bond.

Pierce Brosnan’s first James Bond film and the franchise’s 17th outing, Goldeneye from 1995 is memorable for several reasons. First, you have Sean Bean — 20 years before he is immortalized as Ned Stark — playing Bond’s foe, former license to kill 006 now turned bad guy. Second, the world is introduced to the mesmerizing incandescent six-foot-tall hotness of the former Dutch fashion model turned actress known as Famke Janssen who plays one the most amusingly-named Bond villains of all time, Xenia Onnatop. And third, (though it should really be first) we have the first appearance of the Omega Seamaster 300M (in this case a Quartz Professional model) as Bond’s timepiece. 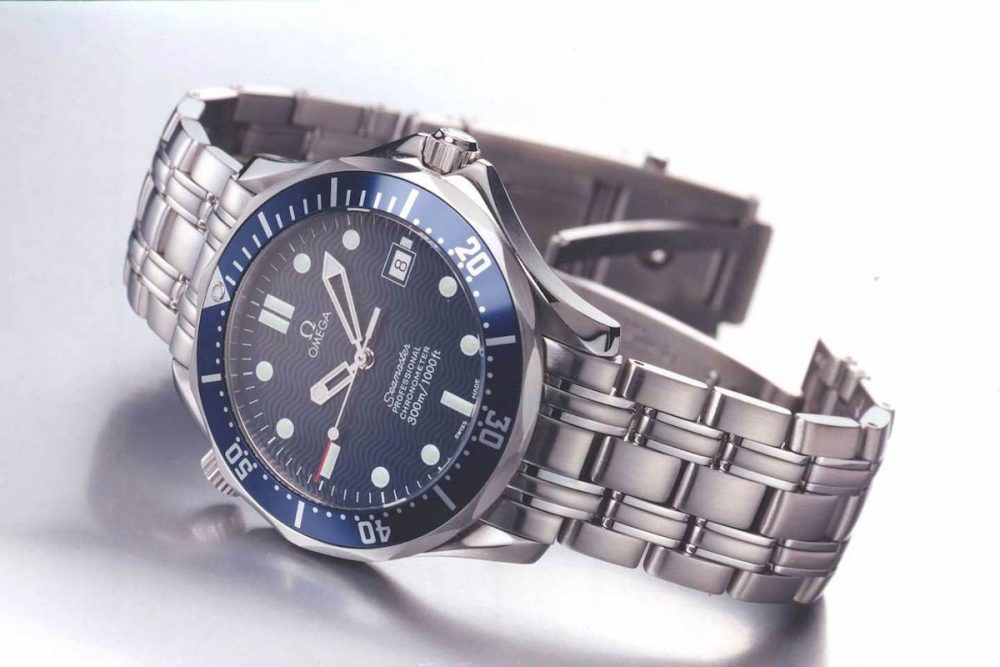 And the watch immediately becomes an icon. It is a straight-forward and proudly rugged, a brushed steel model on bracelet with a blue dial decorated by the brand’s distinctive wave pattern and features the model’s helium release valve at 10 o’clock. What is of note here is that the Omega Seamaster’s helium release valve differs from that of other watches in that it does not sit flush with the case. Instead, it is constructed as a second crown in the watch and is unscrewed to release helium that might potentially penetrate the case during deep saturation diving. For Bond, this valve doubled as a handy remote detonator for bomb in the form of a ballpoint pen that is armed by clicking it three times in succession.

The Seamaster 300 Professional Chronometer created the core foundation of what a James Bond Omega should be. Like its predecessor it featured a 41 mm brushed steel case, blue dial with distinct wave pattern. It should be mentioned that the hands of the watch are to me some of the most unique and compelling elements. They are big bold sword shaped hands, but made contemporary by being skeletonized. The use of luminous material is generous on these hands as it is in application on the dial. The seconds hand is very unique in that it is a lollipop hand — devotees of the Speedmaster CK2998 can tell you how special this is — with a red tip. 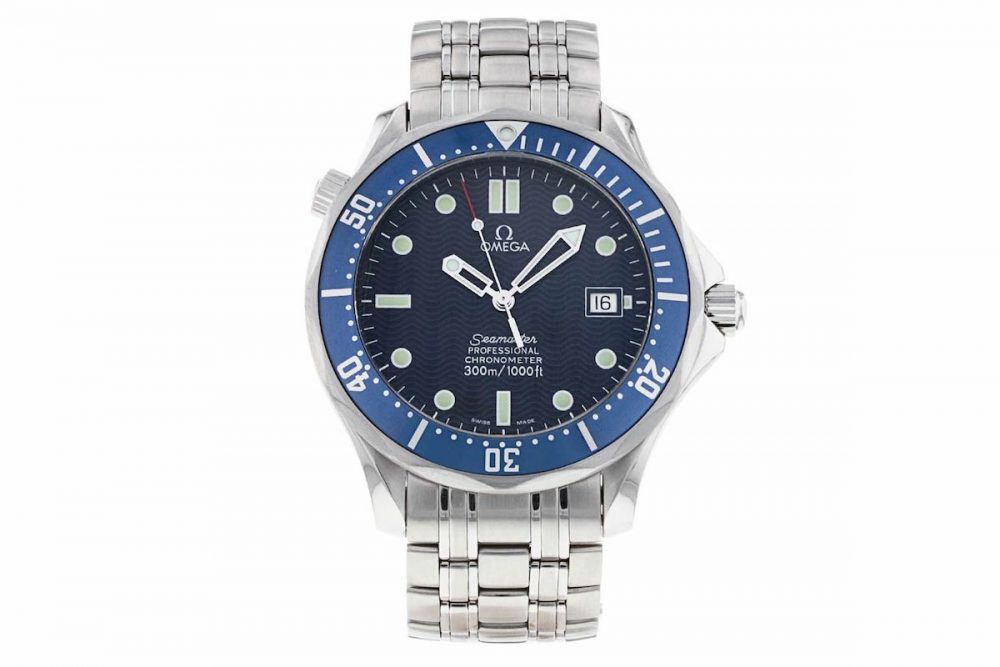 A new era of Bond was ushered in, with a new actor — Daniel Craig — a much respected but still obscure British actor whose most successful cinematic outing until then had been Layer Cake. But the way he interpreted Bond, was practically incendiary. Bond was reimagined as young, brooding and morally ambiguous at times, surprisingly and touchingly romantic and a total badass. It struck cinematic gold. 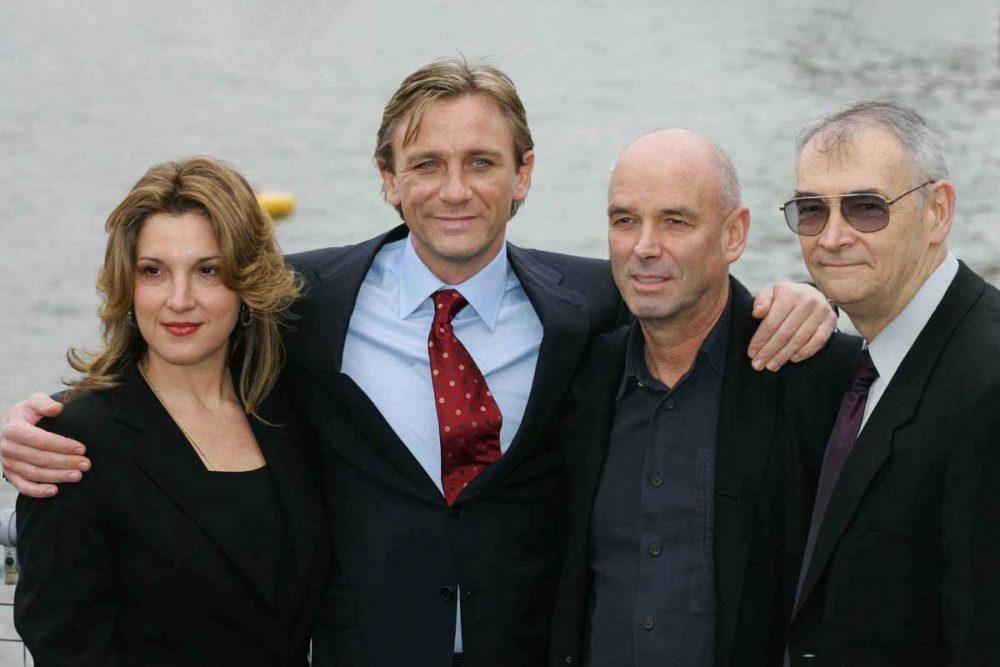 Says Omega's Raynald Aeschlimann, “Because of our relationship with Eon Productions we immediately understood how incredibly important this movie was. So, we decided to use two different watches in the film. The first is the Seamaster Planet Ocean 600M 45.5 mm watch you see in Uganda.

“This is a super robust oversized watch on a rubber strap (the first in a Bond film) and when you see Bond wearing this in the opening sequence you get the sense of a very purposeful, modern Bond. The second watch is the Seamaster Diver 300M which is more of a classic Bond watch.”

This is worn later at the casino with Bond’s Brioni tuxedo and can be considered a bridge to past models. However, while this may look like classic Bond watch, it was equipped with the Co-Axial escapement making it far more performance-oriented than its predecessors. What is also important is that in Casino Royale the watch is a watch rather than a gadget, which fit in with the pared back yet hardcore realism of the new vision for Bond. 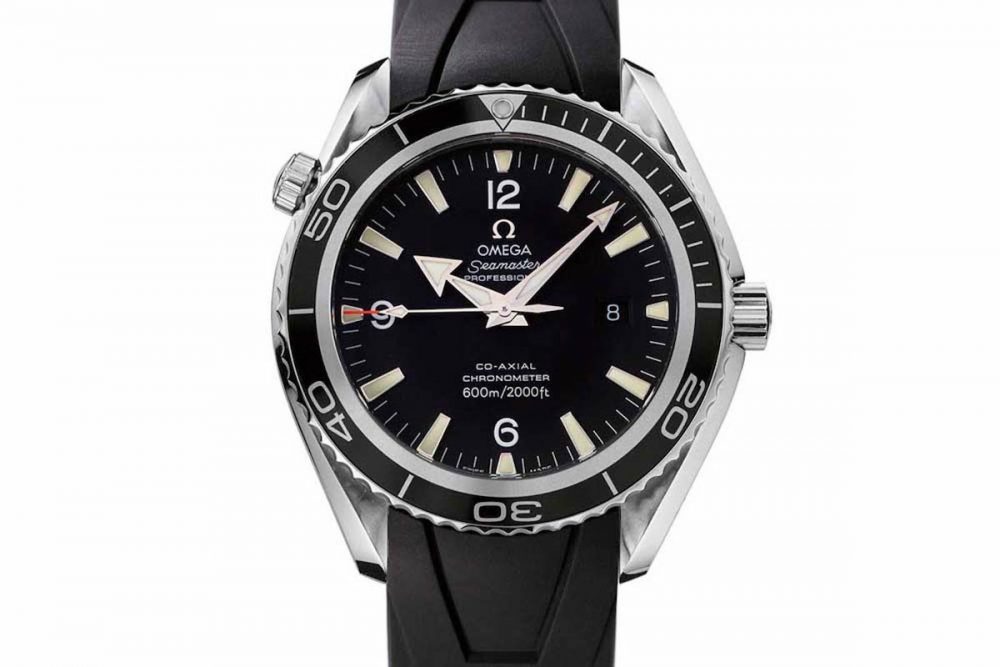 Quantum of Solace is an interesting film in that it is the first Bond film since GoldenEye that doesn’t feature Bond’s traditional Seamaster 300M. Instead, Daniel Craig wears a very handsome Omega Seamaster Planet Ocean 600M 42mm. It is also interesting to note the smaller case size of the watch selected, as if Omega foresaw the return of more classic proportions. 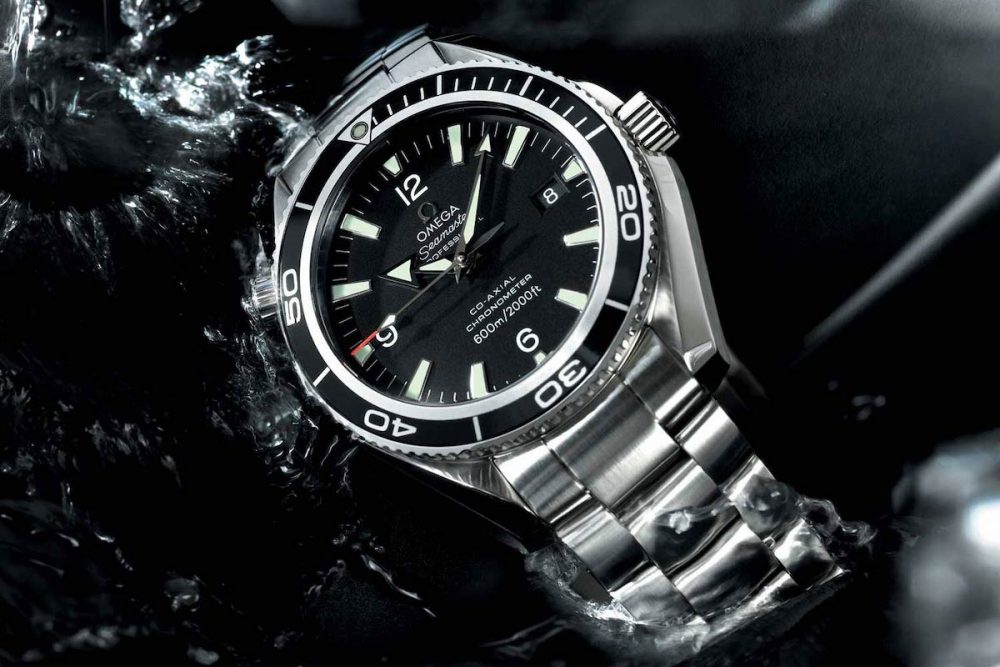 In Skyfall things get interesting in that Bond once again wears two watches. The first is the Omega Seamaster Planet Ocean 600M Ceramic 42mm while the second is a somewhat surprising Omega Seamaster Aqua Terra 150M, sized at a genteel 38.5mm. At this point in horological culture, we have a general return to much more classic sizing and it is nice to see this reflected in the Bond films, and from what I understand, Craig’s personal taste in watches. 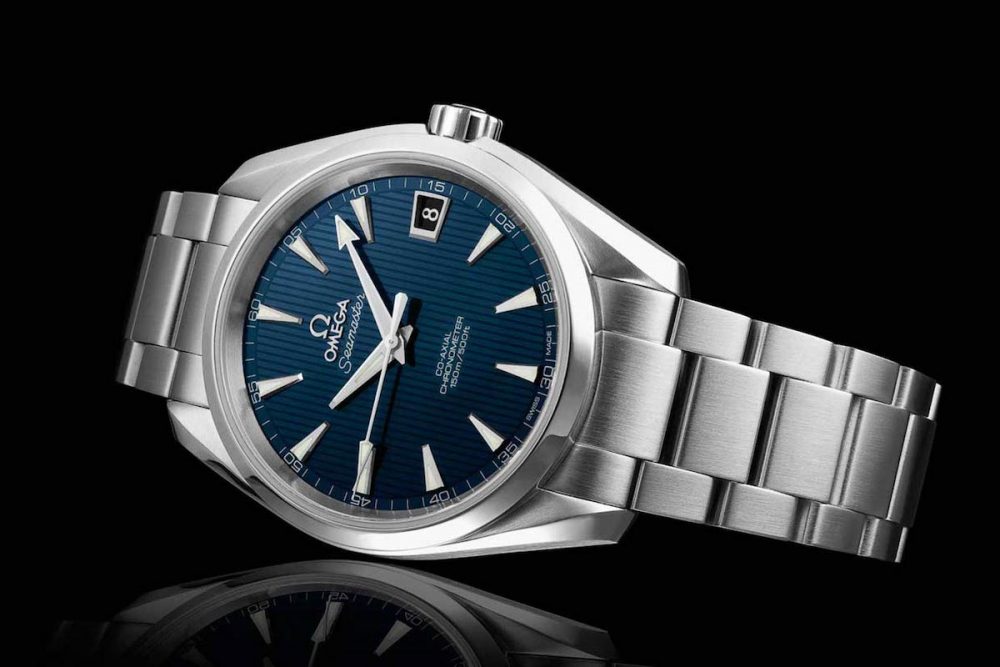 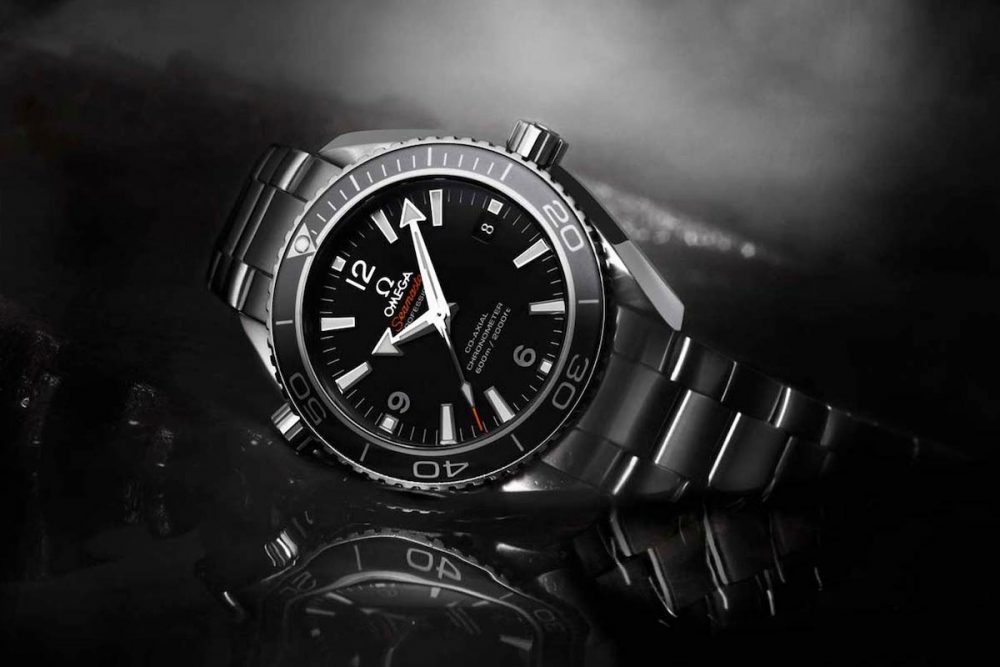 The reason why this watch is so cool also has to do with the appointment of Raynald Aeschlimann as the new CEO of Omega, though this would only be officially confirmed and announced the following year. What you experience with this watch is what has become his signature flair for design. Also of note is that for the first time in the history of the Daniel Craig reboot, the watch is a gadget. In this case it is a bomb that helps Bond escape Christoph Waltz’s automated lobotomy machine. 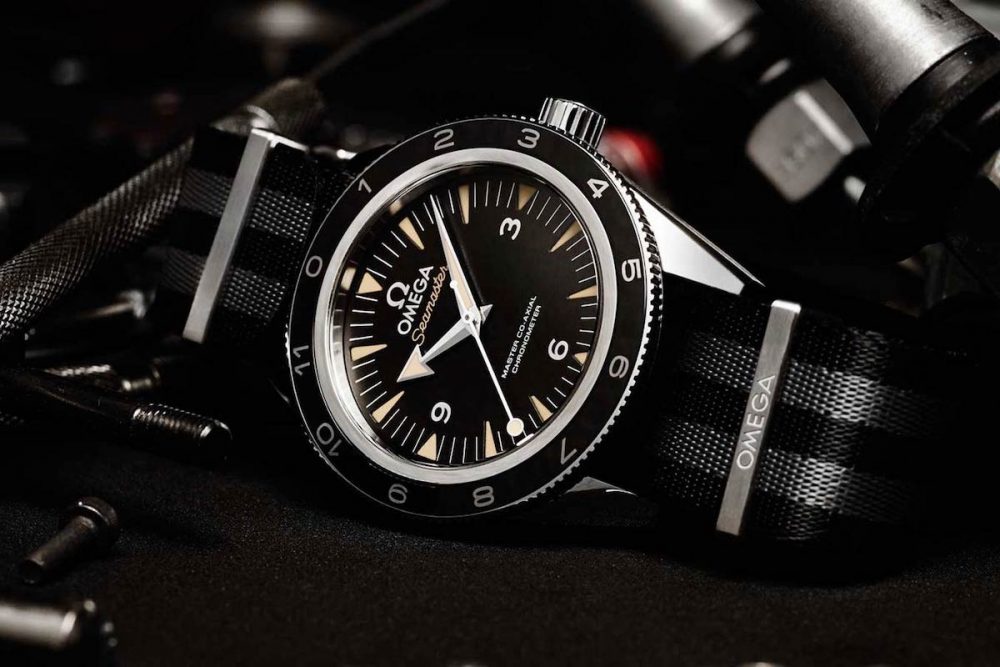 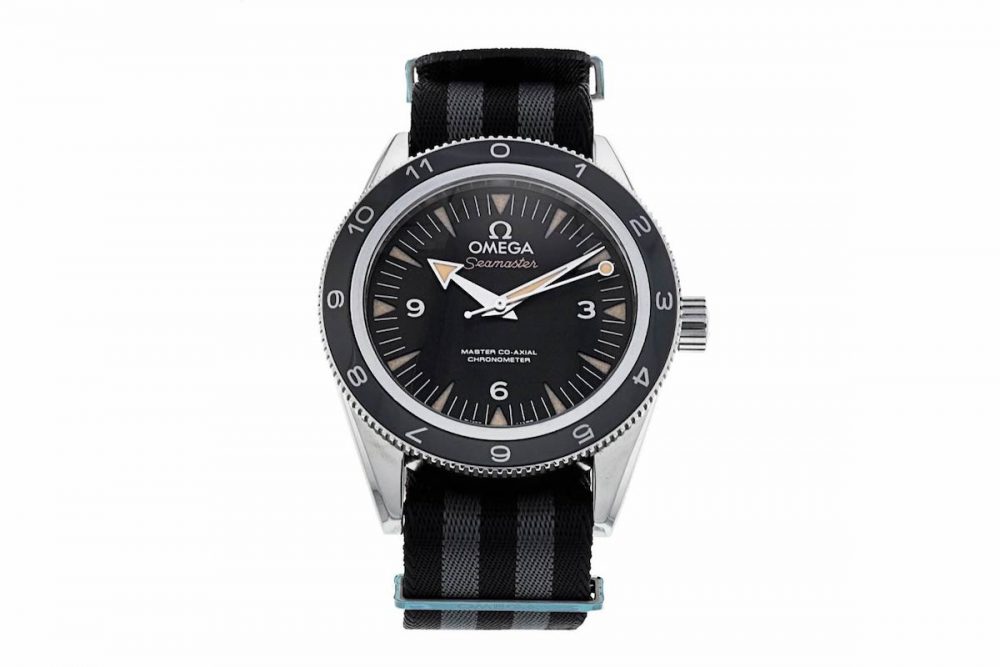 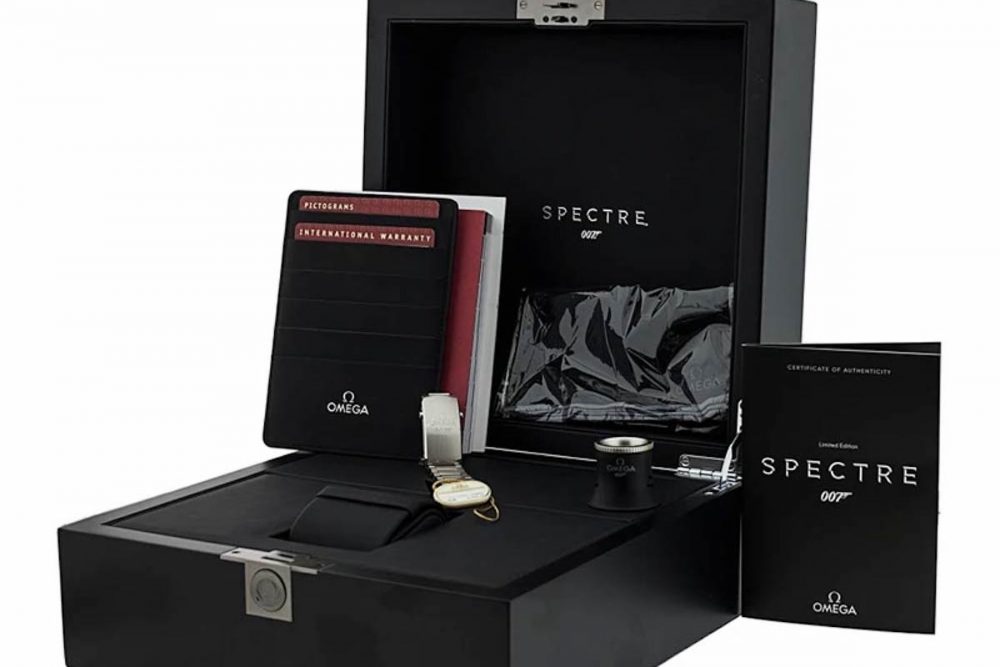 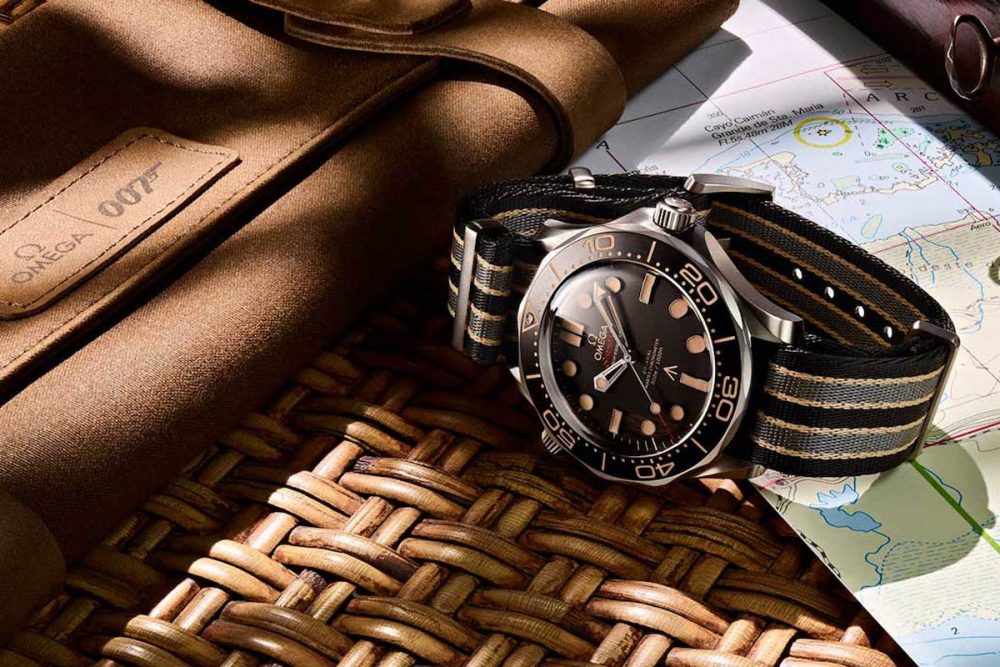 Which brings us back to No Time to Die and what is the coolest James Bond watch ever made and the coolest movie collaboration timepiece to ever exist. As I mentioned, first of all, Daniel Craig had a real hand in designing the watch.

The first thing that he and the team at Omega decided on was to select titanium as the case material — in this instance, the same Grade 2 titanium that was used in the super collectable Omega Speedmaster Apollo 11 45th anniversary watch.

Says Perret, “Grade 2 titanium has a very stealthy and dark hue to it which we found very appropriate for the watch of the world’s most iconic spy.”

But what is truly extraordinary is that for the first time, Omega has also created a mesh titanium bracelet, specifically a Milanese-style flat mesh bracelet that is both incredibly supple while looking bombastically badass in combination with the Seamaster 300’s famous iconography. 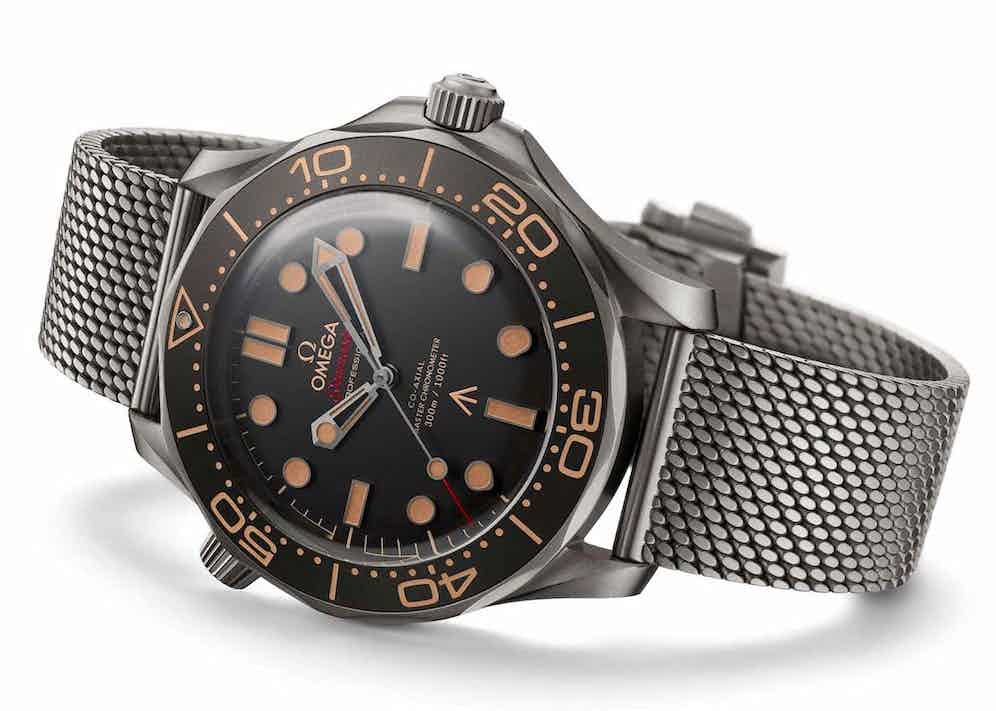 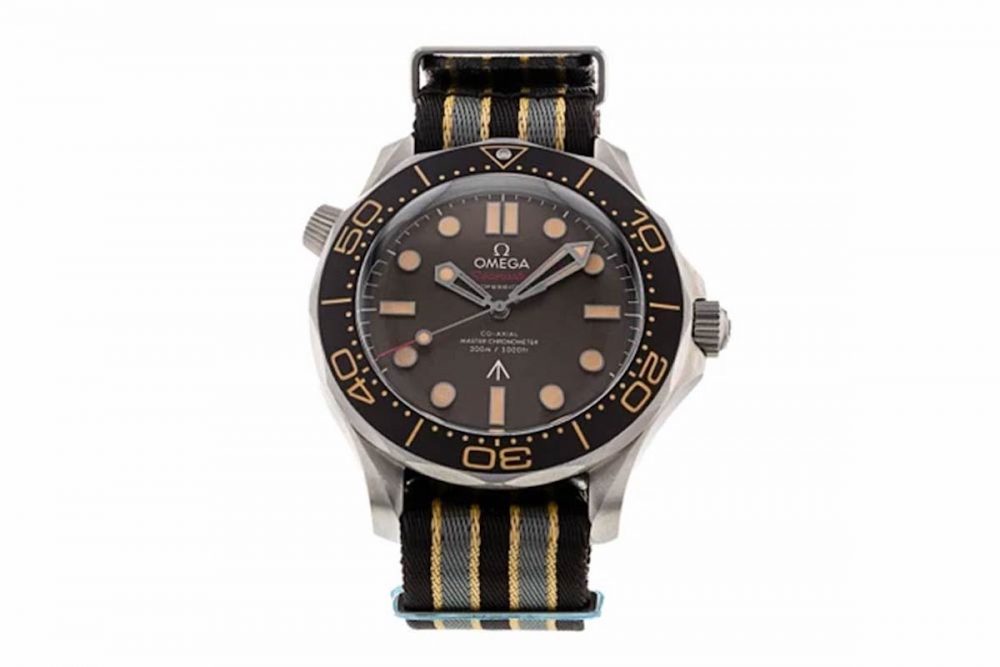 The dial is matte, with massive chunks of luminous material which are accompanied by the famous skeletonized sword hands and red-tipped lollipop seconds hand we first saw in Bond’s Seamaster as far back as GoldenEye.

Both the luminous material on the dial and hands as well as the diving scale in the watch’s aluminium bezel are a vintage ecru color that is reminiscent of tritium or radium that has aged over the years. Says Aeschlimann, “I love the combination of one of the world’s most modern materials (titanium) with this vintage-inspired detail. This was something that came from Daniel Craig and we thought the dynamic tension between modernity and vintage in the context of Omega was something very exciting.

“In many ways the watch is the perfect symbol for Bond, who is a huge part of all of our childhoods and our past, but thanks to the way the Barbara and Michael have re-envisioned him for the modern world and the way he is so wonderfully portrayed by Daniel, he is also thrillingly contemporary.”

But the best part of the dial is found very subtly just above the ‘6’ o’clock index. And that is the existence of none other than the Broad Arrow marking that designates the watch as commissioned by the British Ministry of Defense. That makes this timepiece the only modern, non-military issued Omega to feature this incredible link with the brand’s faithful service to the British armed forces and harks back to Lindy Hemming’s memories of her father.

The James Bond special edition Seamaster 300M in titanium with broad arrow on titanium mesh bracelet is more than just the coolest watch to drop in 2019. It’s a living expression of the incredible relationship between Omega and Bond that has endured, evolved and only gotten better as time goes by. 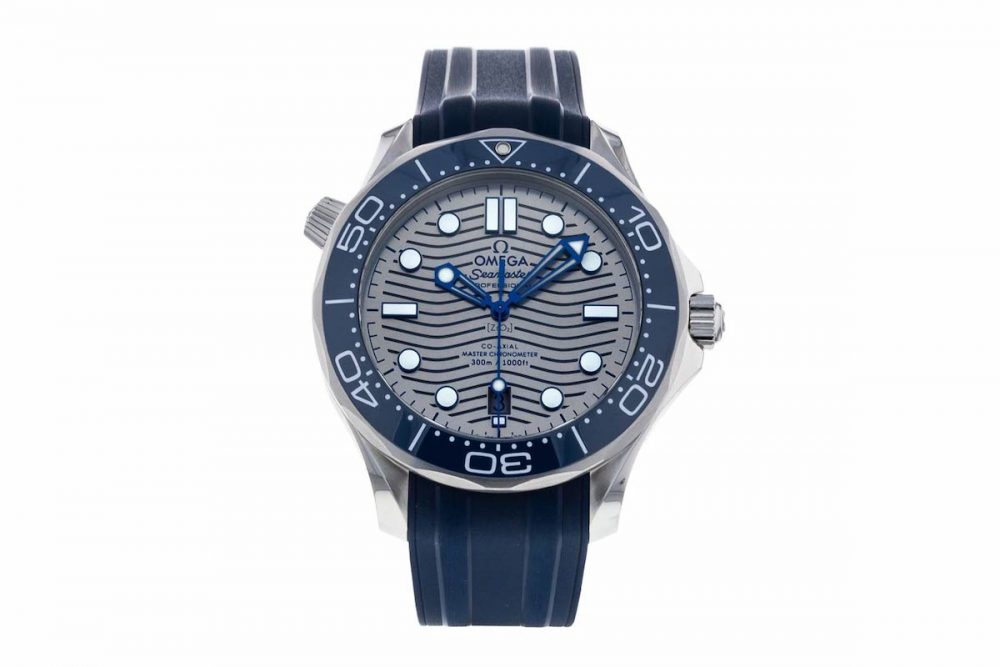