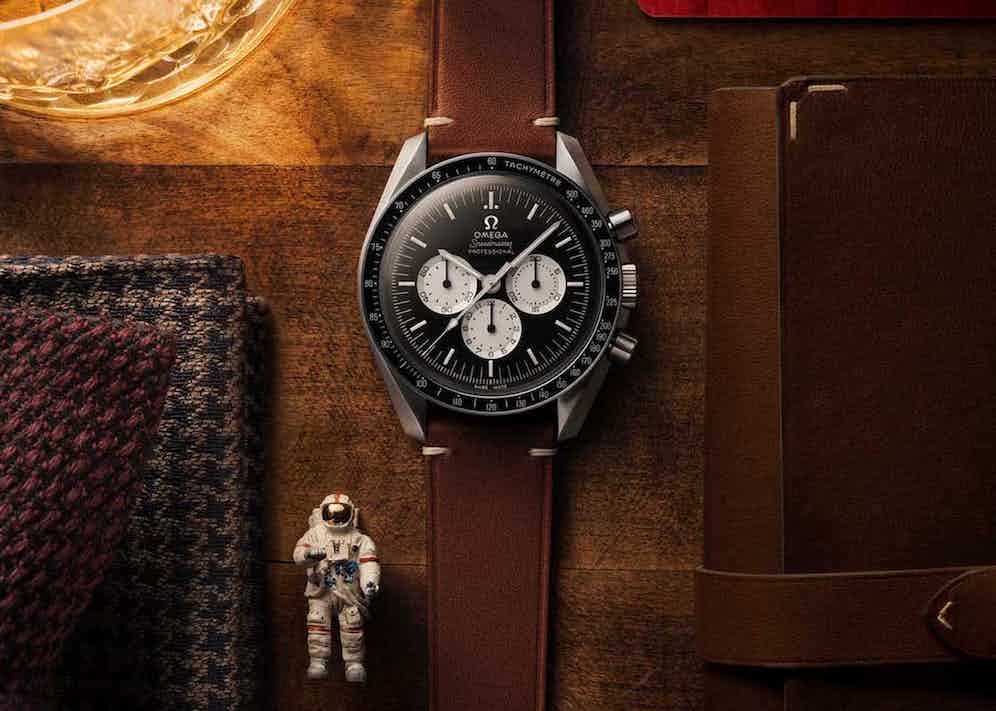 When it comes to sports chronographs there is none other that is as soaked in lore as the Omega Speedmaster. The watch was created for the expressed needs of auto-racing and featured a tachymeter — a scale that combined with the chronograph’s sweep seconds hand could give you your average speed over fixed distance. This bold, modern scale was printed on the watch’s bezel making it the first contemporary timepiece with this feature and forged the genetic blueprint for all sport chronographs from this point on.

The Omega Speedmaster started its history as a racing chronograph 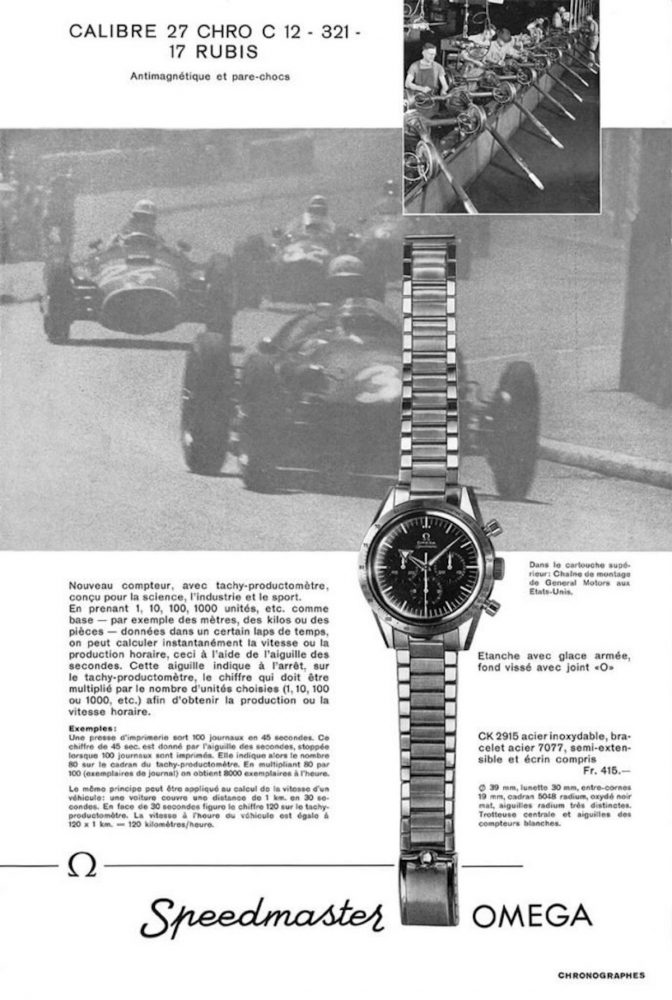 But it was the Speedmaster’s association with NASA and its status as official equipment to astronauts and the first and only watch on the moon that allowed it to transcend its status from a mere timepiece to a cultural icon, inextricably interwoven into the very fabric of space conquest.

The first Speedmaster that went unofficially into space, as the personal watch of Mercury astronaut Wally Schirra, on October 3rd 1962, was the CK2998. This was a full three years before NASA officially went through the rigors of certifying the Speedmaster “Flight Qualified for all Manned Space Missions.” 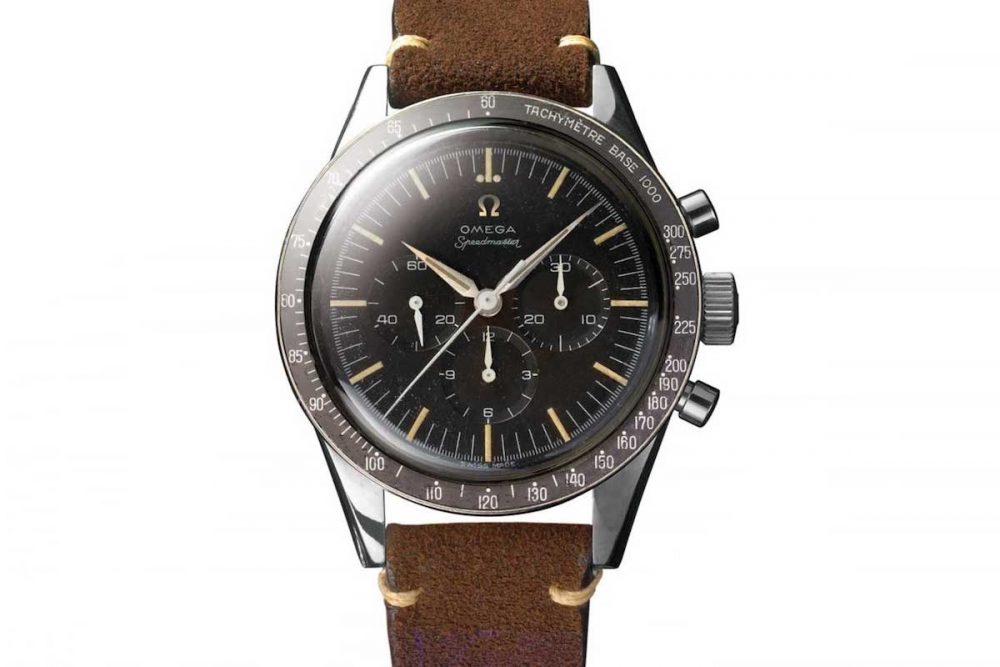 The CK 2998 is the first Omega Speedmaster to go to space, worn by astronaut Walter Schirra (it was his personal watch) when he orbited the Earth six times in the Sigma 7 spacecraft on October 3, 1962.

Reality Check No. 1: The OMEGAMANIA auction took place 13 years ago. While we can attribute Omega’s vertical trajectory in desirability as dating from that memorable April 2007 auction, sustaining it over a decade-plus showed the brand to possess every virtue that makes vintage timepieces desirable, with irresistible appeal beyond the ephemeral exhilaration of that sale. Quality, style, enviable heritage — throw in the unique selling point of going to the Moon, and it’s no mystery why the Omega Speedmaster chronograph is one of the hottest properties in the vintage watchdom.

Reality Check No. 2: “Limited editions” – “Commemoratives” – “Anniversary Models”: These are klaxons that declare said models are intended from the outset to attract collectors rather than civilians less concerned with exclusivity. They also warn that such pieces of deliberately finite production will one day be auction-bound.

Below, we have selected a few Speedmasters for our readers that we find highly attractive and would be great additions to any watch collection. The best part is that through our partnership with pre-owned expert Watchfinder, they are all currently available to purchase on The Rake's online shop! 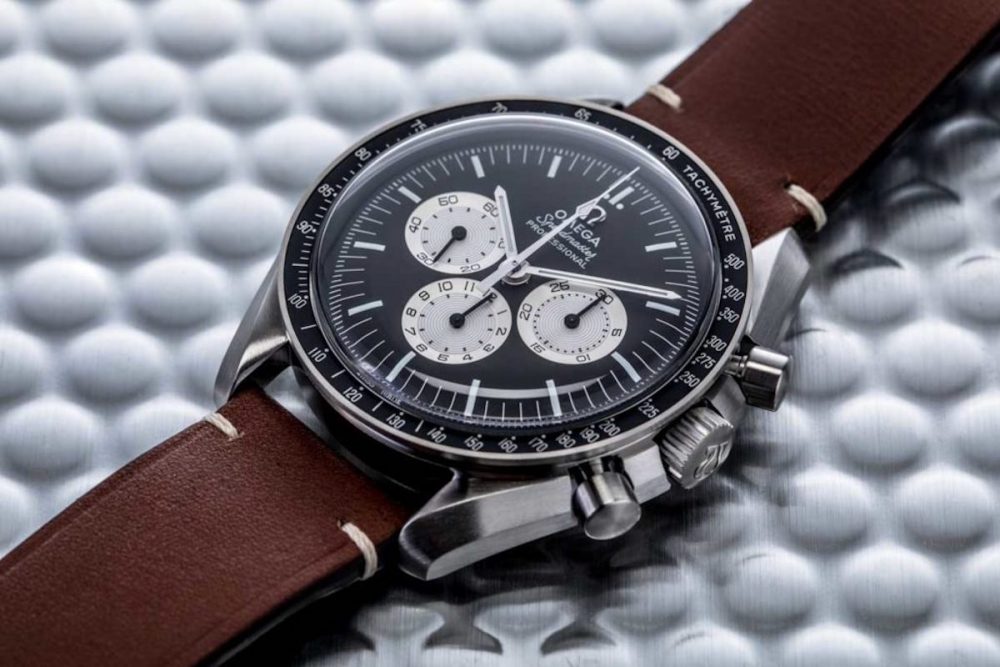 Future historians charting Omega’s appeal will probably consider this watch as important as the “OMEGAMANIA Effect” in elevating the brand’s collector appeal. It showed how desirable limited editions could be, especially if sold online and targeting enthusiasts. Produced in 2017 to commemorate a half-decade support by the online community of #SpeedyTuesday fans, this model featured “radially numbered” sub-dials in white, for a “reverse panda” look, along with other almost-secretive details from the Speedmaster’s history, including the Alaska Projects. Only 2012 made, in honour of the year the group started, and all were sold in four hours. And then, appeared in the second-hand market near instantaneously.

2019 Omega Speedmaster Moonwatch “Dark Side Of The Moon” Apollo 8 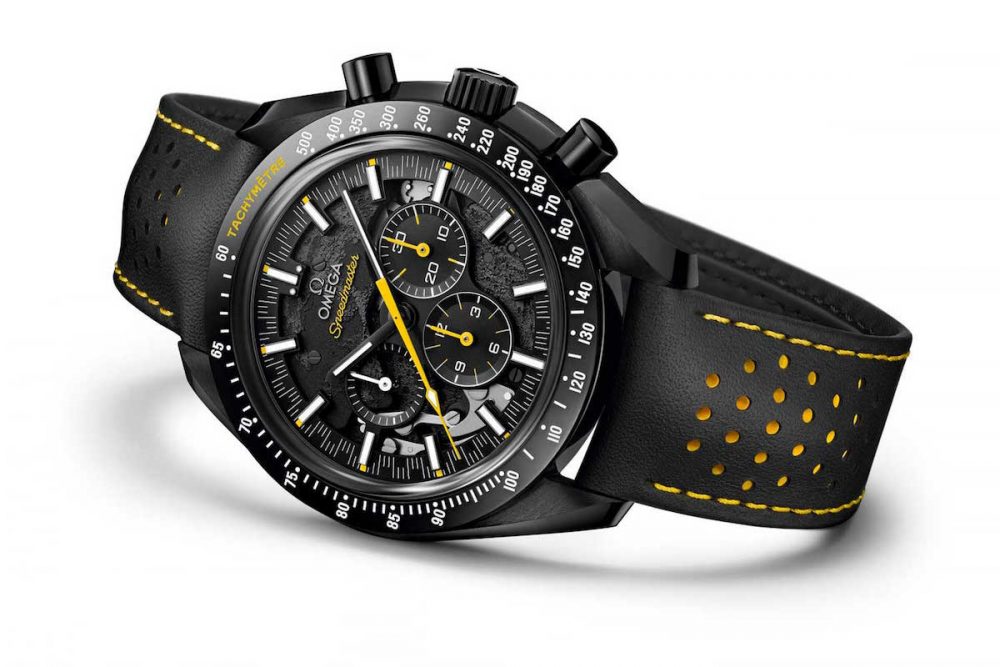 Of all the various Dark Side case Speedmasters, perhaps, the most impressive was the 2018 “Dark Side of the Moon” Apollo 8 (ref. 311.92.44.30.01.001). This model created for the 50th anniversary of Apollo 8 mission, featured the Dark Side 44.25 ceramic case, a racing style seconds track, a sapphire dial and an incredible Calibre 1861 that had all its plates and bridges laser ablated with a photo realistic interpretation of the moon’s surface relief, then treated in black to replicate the view of the Apollo 8 astronauts as for the very first time in human history they orbited the dark side of the moon. What was truly beautiful about this watch is to witness the beauty of the chronograph works in brushed steel in stark contrast to the distinct black bridges and plates. 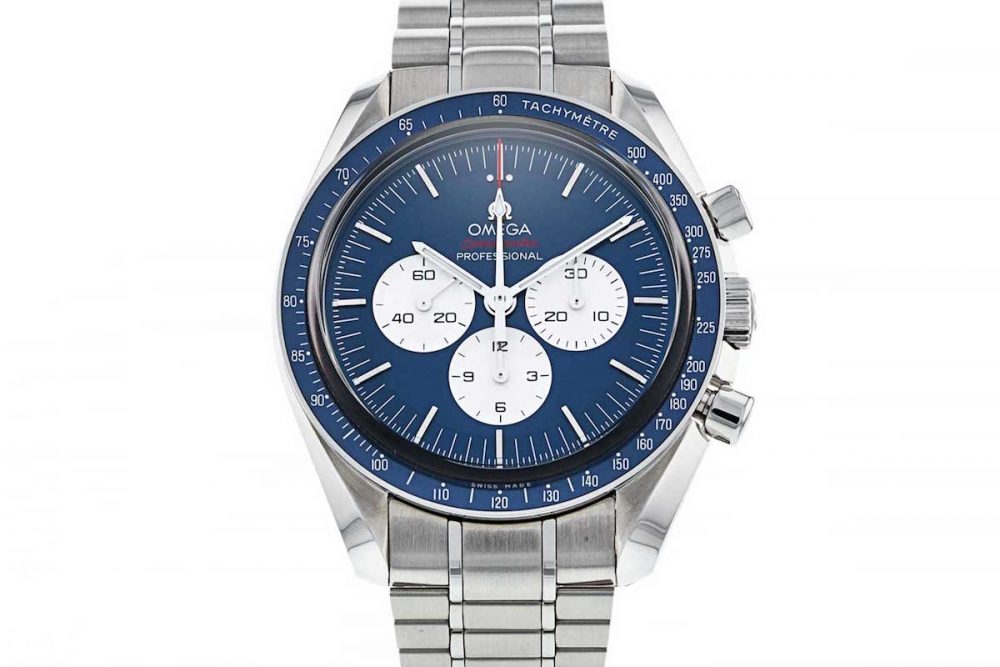 2020 was supposed to be a celebration of sportsmanship and world nations putting aside their differences to compete fairly in the most important sports event. Carefully selected athletes should have been competing in the hopes to make their home country proud, and realise the greatest achievement in sports: winning an Olympic Gold medal.

As the official timekeeper of the Olympic Games, Omega released a series of 5 limited edition watches dedicated to the Tokyo 2020 Olympics; and available only in Japan. Omega decided to use the Speedmaster as the canvas with a design inspired by the five colours of the Olympic flag – namely the blue, yellow, black, green and red rings depicting the five continents.

The first of the five models – ref. 522.30.42.30.03.001 – features a highly attractive blue-panda look very different from the usual black dial of the Omega Speedmaster. The watch contains a combination of a steel case, a blue bezel and a blue brushed dial with white sub-counters. Other notable elements are the red Speedmaster logo, the elongated applied indices, the silver chronograph counters and the red-tipped seconds hand. The rest of the specifications are the same as the standard Speedmaster with its 42mm asymmetrical case, brushed and polished, external tachymeter scale on the bezel, calibre 1861 hand-wound with the 3-6-9 layout for the chronograph, 3-link steel bracelet. One difference concerns the caseback; instead of the customary sapphire caseback, the Olympic model features a solid steel back stamped with the Tokyo 2020 logo. 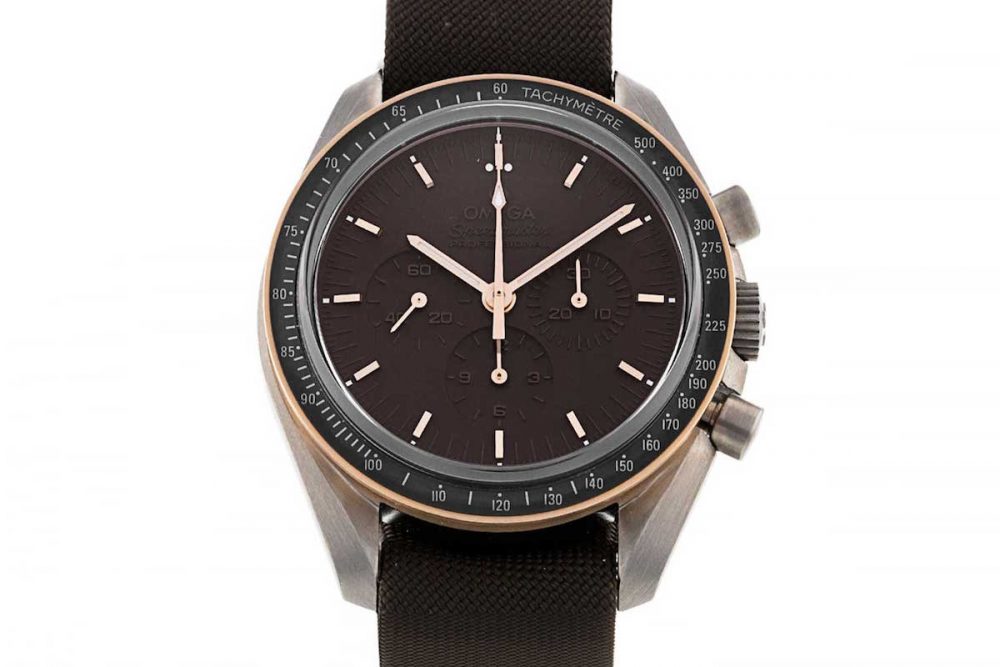 The OMEGA Speedmaster Professional Apollo 11 45th Anniversary Limited Edition was introduced in 2014 in celebration of the 45th anniversary of the Apollo 11 mission. It was the first Speedmaster Professional in regular production featuring a titanium case. The bezel is made of Omega's proprietary 'Sedna' red gold while the tachymeter insert is in ceramic. Omega's Sedna gold alloy blends in gold, copper and palladium and has a minimum gold content of 75%. The result gives the gold a unique rose color and the Palladium ensures the long-lasting effect of the reddish hue on the Sedna gold.

The dial is very unique for Omega since the logo and wording have not been printed like we are used to, but instead here the dial is made of 1 piece and treated with black PVD. The dial was made using a special laser which created the distinctive dial by removing all material surrounding the logo, model name, sub dial numerals, minute and hour markers. It is definitely one of the coolest looking Speedmaster we have encountered. 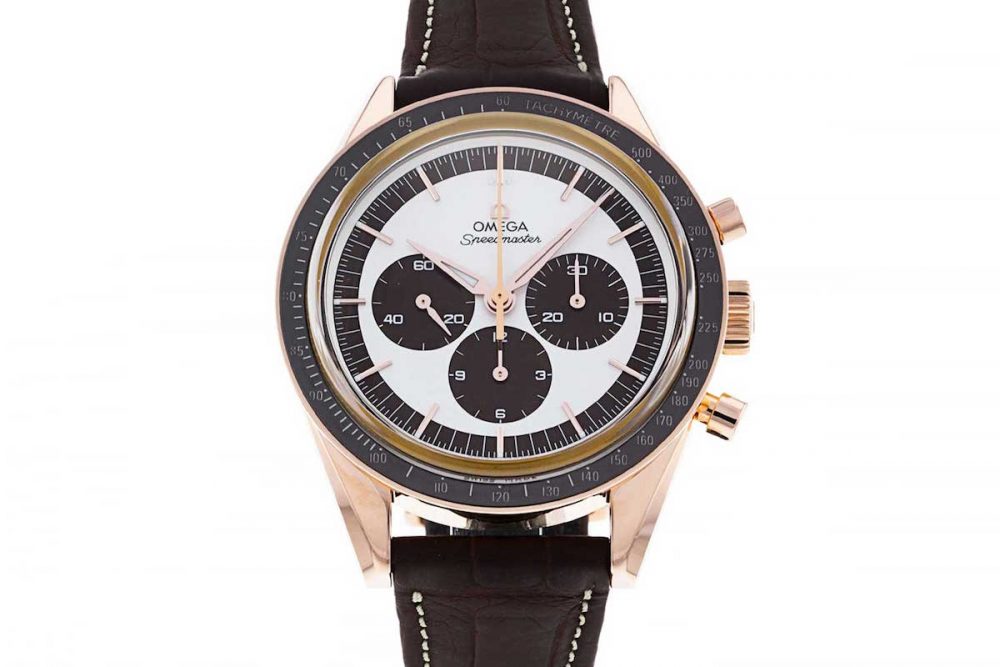 The Omega "First Omega In Space" Speedmaster is based on the ref. 2998 worn by Astronaut Wally Schirra into space aboard the Mercury Atlas 8 mission in October of 1962, an event to which the new model owes its name. The present model is 39.7mm in size and features an external tachymeter scale with dot over 90, alpha hour and minute hands, alpha and baton hands on the subdials, and is powered by the manually-wound Lemania-based caliber 1861, which Omega has been using since 1968.

For this timepiece, Omega has decided to use their unique and proprietary combination of gold, copper, and palladium to achieve a warm tone that lies somewhere between red and pink gold. To complement it, Omega has created a brown ceramic bezel, which offers a little nuance to the watch. 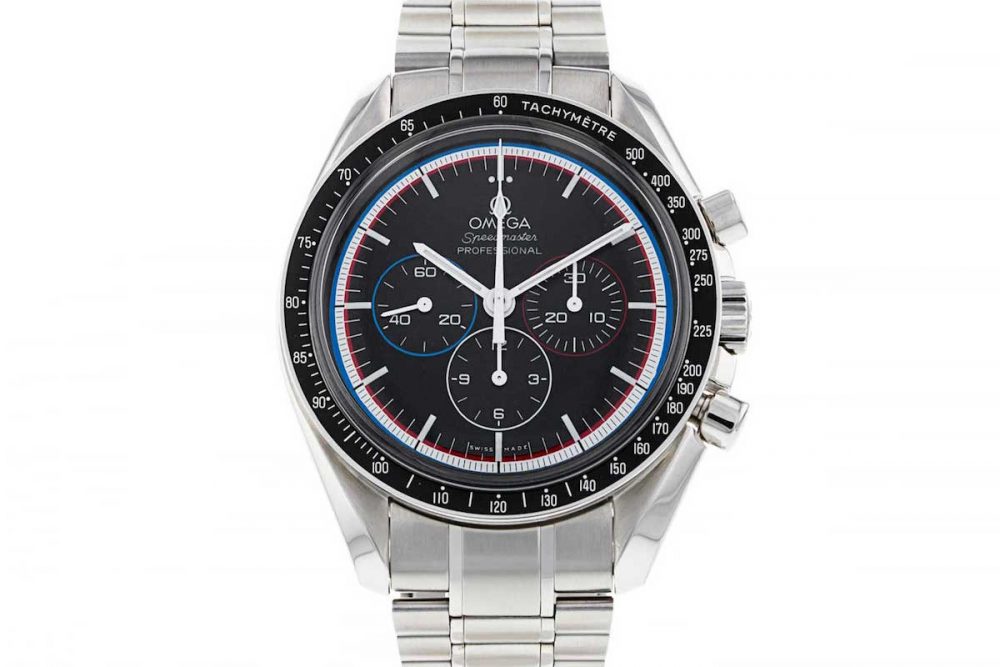 The Omega Speedmaster Professional Apollo 15 40th Anniversary is a limited edition of 1971 pieces, introduced in 2011 in celebration of the 40th anniversary of the Apollo 15, which was the fourth of NASA’s six missions to land on the Moon – and the first in which the Lunar Rover was used.

There are also some features which distinguish the Apollo 15 40th Anniversary model from the classic Speedmaster Professional. This Limited Edition timepiece has a minute track in blue, white and red – the three colors of the Apollo 15 patch. There is a blue ring around the small seconds subdial; there are white and red rings around the 12-hour and 30-minute counters respectively. The screw-in caseback is embossed with an image of the Lunar Rover and the words “APOLLO 15” and “40th ANNIVERSARY”. The outer circle of the caseback is black chrome engraved with “THE FIRST WATCH WORN ON THE MOON”, “JULY 30, 1971” and the limited edition number.