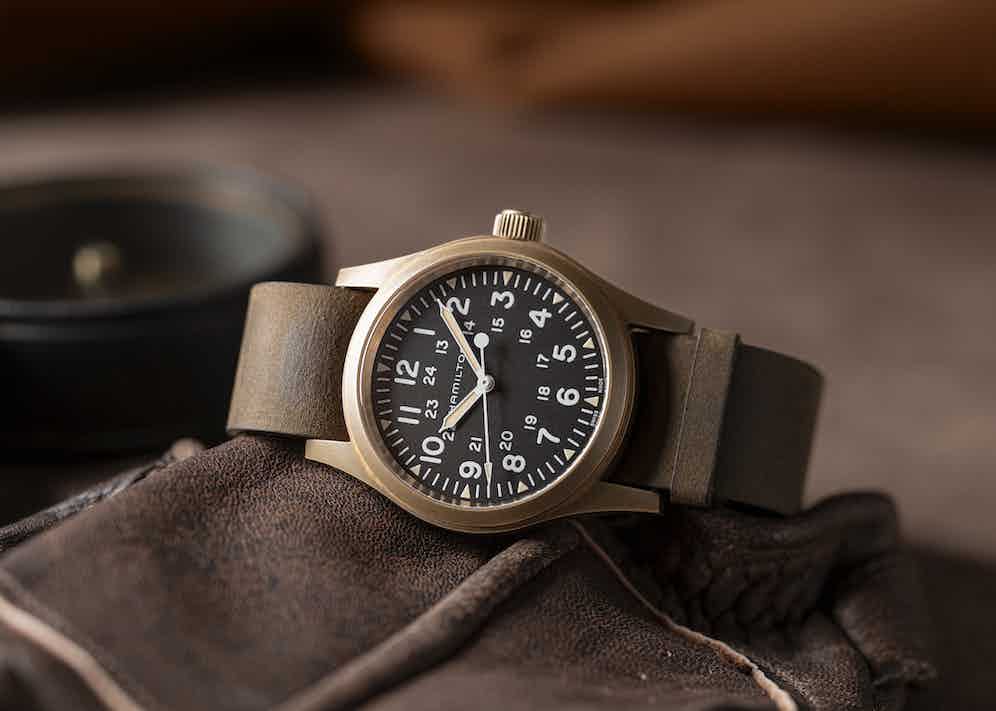 Everyone loves a watch that fills a purpose. Dive watches made to conquer depths that we will never venture down to. Chronographs, intended to time laps we will never race. Even dress watches, paired with tuxedos we rarely wear. We find intense joy in the specialized and the niche. That's all well and good, but there’s an even greater joy to be found in the quotidian — a comfortable, reliable ritual that makes up so much of our daily, ordinary life. The ordinary is calming and has a distinct charm. It’s also a life that calls for a particular sort of watch — an everyday companion, proven and reliable.

This is exactly where the genre of watch known as the field watch fits. Hard-wearing, robust and functional — the field watch typically doesn’t boast the bells and whistles of more specialized sports watches, but it doesn’t need them. Field watches have been around in one form or another for over a century, and they have proven themselves in some of the harshest environments imaginable. While many brands have created their own take on a field watch, one name stands above them all, and that is Hamilton. Before we learn about the brand’s latest Khaki Field Mechanical 38mm, let’s find out where the field watch was born. 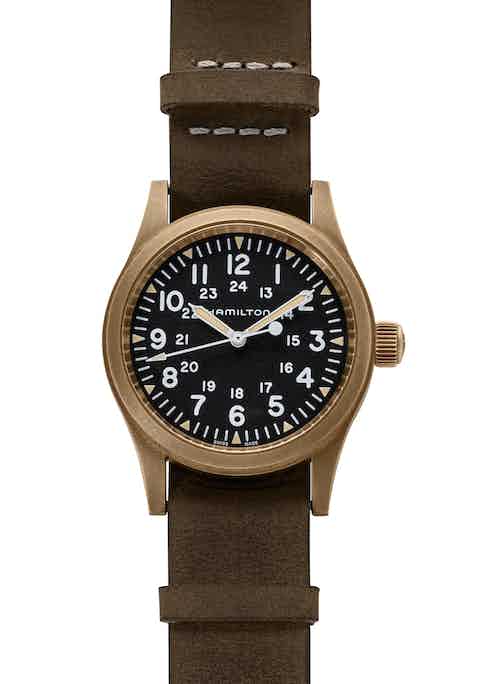 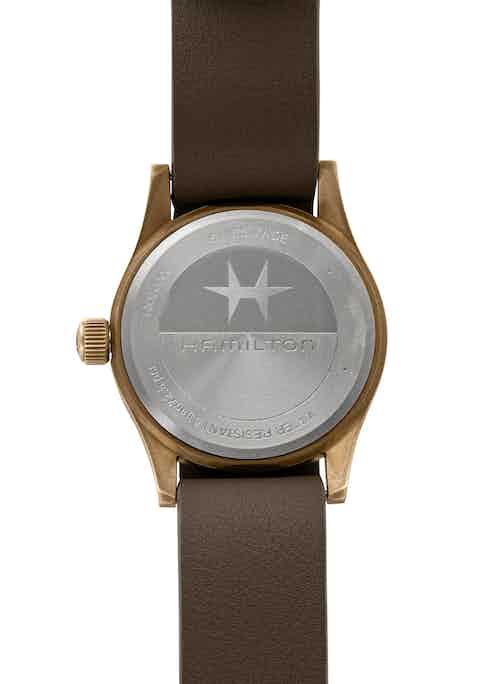 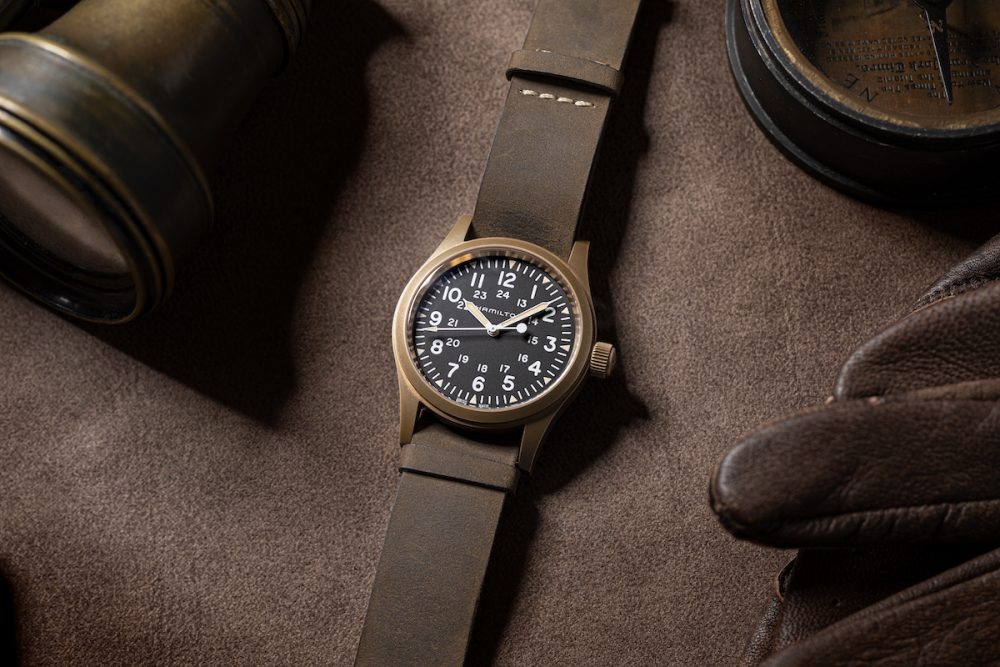 The Hamilton Khaki Field Mechanical 38mm collection is a direct descendant of the military watches of the 1960s, albeit with some welcome modern twists. (Image: Revolution)

There are a few contenders for the title of “first” wristwatch, be that the timepiece commissioned by a Neapolitan queen, or the one made for the pioneering Brazilian aviator. In truth, these singular examples did little to shift the needle of popular taste when it came to moving watches from pockets to the wrist. The necessities of modern war drove that shift.

In the First World War and other conflicts, an accurate and rugged watch could be a literal life-saver. Of course, this style of watch, born on the field of battle, didn’t end there. The utility of the wristwatch was proven, and as thousands of veterans returned home wearing them, the era of the wristwatch had begun. But beyond firming up the future of the wristwatch, the defining qualities of a military field watch — legibility, reliability and durability — had been clearly established. More importantly, it quickly became evident that these attributes weren’t just for the armed forces. Outdoorsmen, explorers and backyard adventurers found uses for these hard-wearing watches. The field watch was a proven hit with civilians and service members, and watch brands paid attention, with many making their own version of this practical timekeeper. 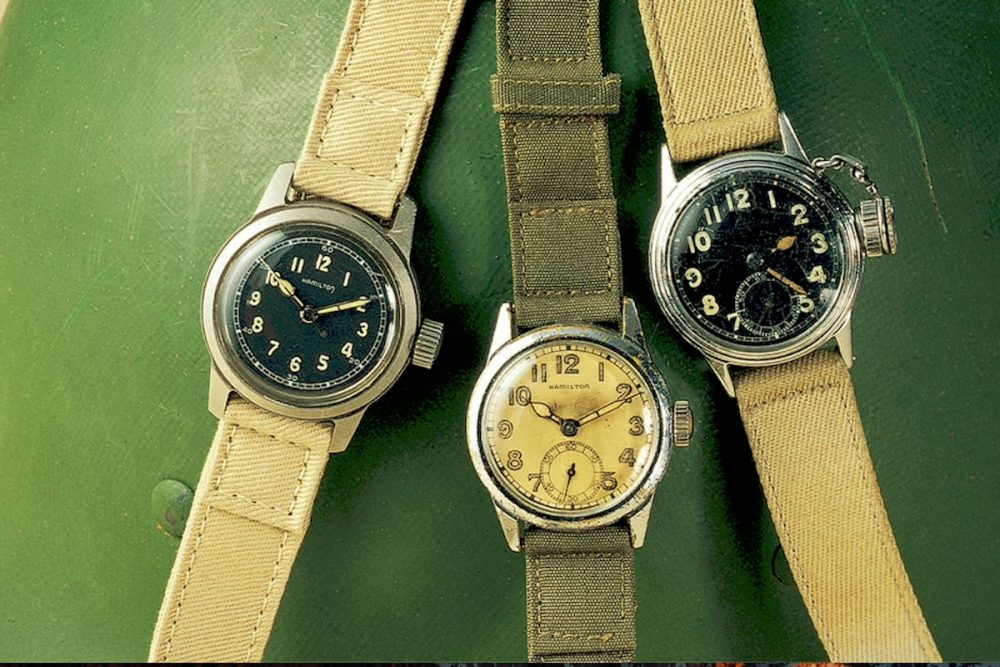 In 1942, Hamilton ceased all consumer-focused production and delivered more than one million timepieces to the armed forces during the war.

From Lancaster to the World

When it comes to field watches, the name of Hamilton looms large. Founded in 1892 in Lancaster, Pennsylvania, the heart of American watchmaking, Hamilton’s watchmaking played an important role during the Second World War. In 1942, Hamilton ceased all consumer-focused production to concentrate on the needs of the armed forces because more than ever before, timekeeping mattered in war.Hamilton played its role brilliantly, delivering more than one million timepieces during the war. The trying conditions of wartime production required the watchmaker to innovate, developing new lubricants and their own non-metallic alloy for use in hairsprings, Elinvar Extra. Of particular significance were the 10,000-plus marine chronometers the brand produced. These gimbal-mounted, high-grade pocket watch mechanisms were primarily used for naval navigation — in a hostile environment when radio signals could be intercepted, navigation by dead reckoning was the only viable option. That required an accurate chronometer, and the ability of Hamilton to produce their incredibly accurate chronometers at scale had a material effect on the American war effort. Admiral Arleigh Burke, chief of staff to vice admiral Marc Mitscher during the battle for Leyte Gulf, wrote: “The ships of the 3rd and 7th Fleets that fought at Leyte Gulf were absolutely dependent upon Hamilton Marine Chronometers for the accurate time that was essential to successful naval and air operations. This United States victory, in one of the greatest naval battles ever fought, marked the beginning of the end of World War II." 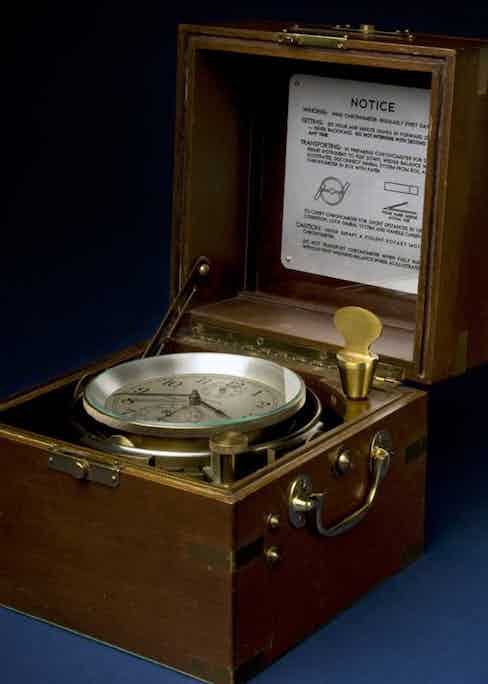 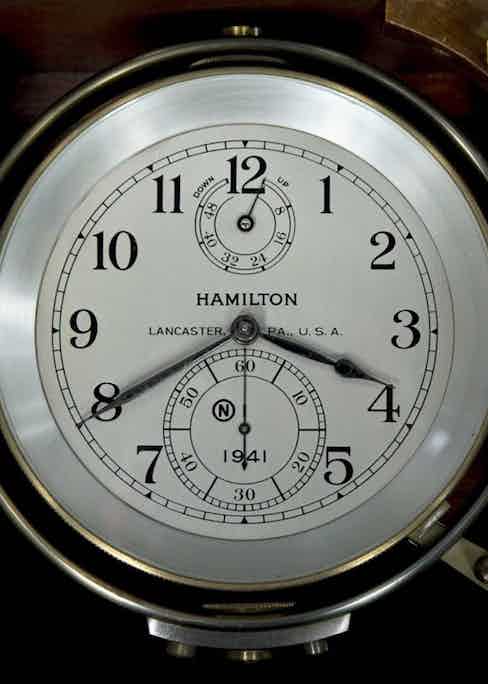 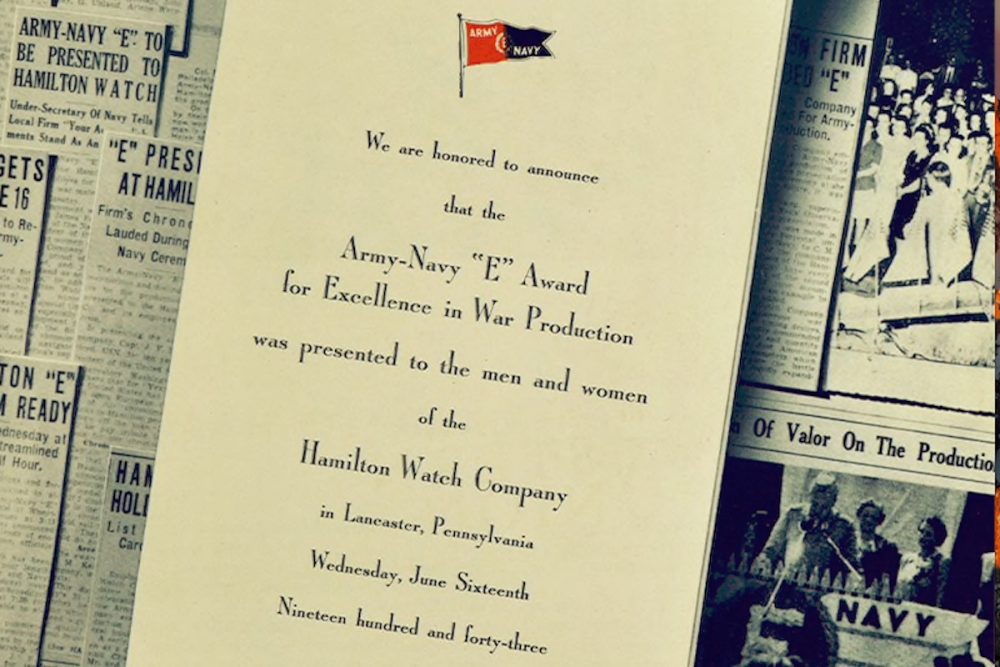 Between 1943 and 1945, Hamilton was awarded with the Army-Navy “E” award five times for its unparalleled contribution to the war effort.

So well-regarded was Hamilton’s contribution to the war effort that between 1943 and 1945, it was awarded with the Army-Navy “E” award five times. This award was a symbol of unparalleled excellence in production. Of the 85,000 companies contributing to the war efforts, fewer than five per cent would receive this distinction. Hamilton’s production included less specialized pieces, such as the accurate wristwatches supplied to the U.S. Army Ordnance Department, which, like most military issued watches, was powered by the brand’s caliber 987 and its variants, and the standard-issue military wristwatch which, with its black dial, luminous hours and well-built case truly fit the mold of a field watch.

From the Field to the Jungle

It is a different watch, from a different war, that serves as the template for the Khaki Field Mechanical 38mm. It is a watch made according to the military specifications laid down in 1964, known as MIL-W-46374, which listed the requirements for the general issue military watch, requiring an economical and mass-produced timepiece. This document, more than any other, effectively codified and standardized the modern field watch. It wasn’t long before these watches started being issued in bulk by quartermasters across the American sphere of influence as American combat troops entered the Vietnam War from 1965, with more than half a million in the theater by 1969. 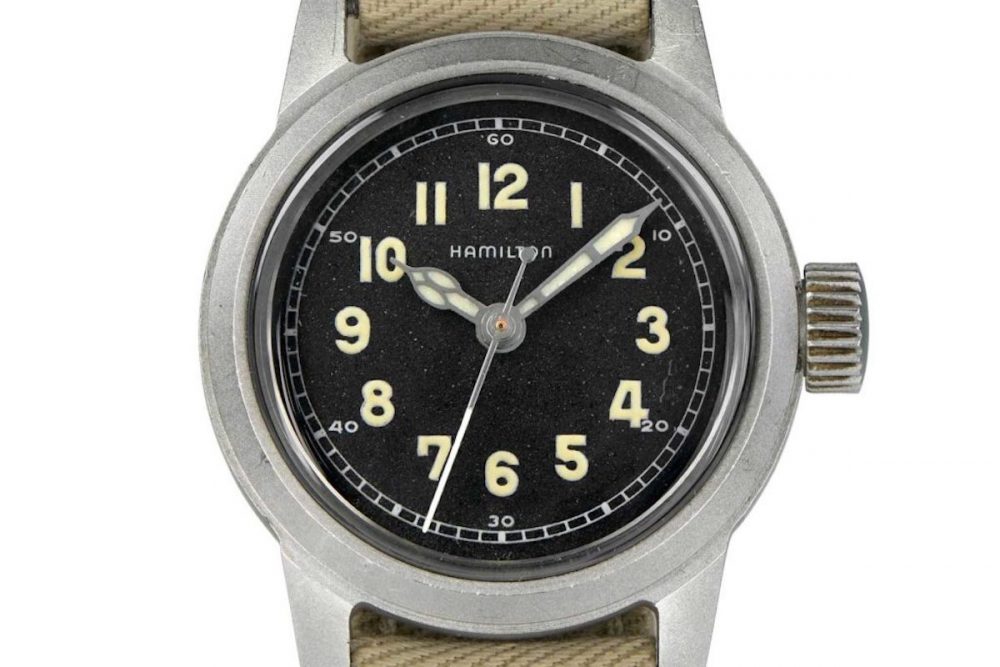 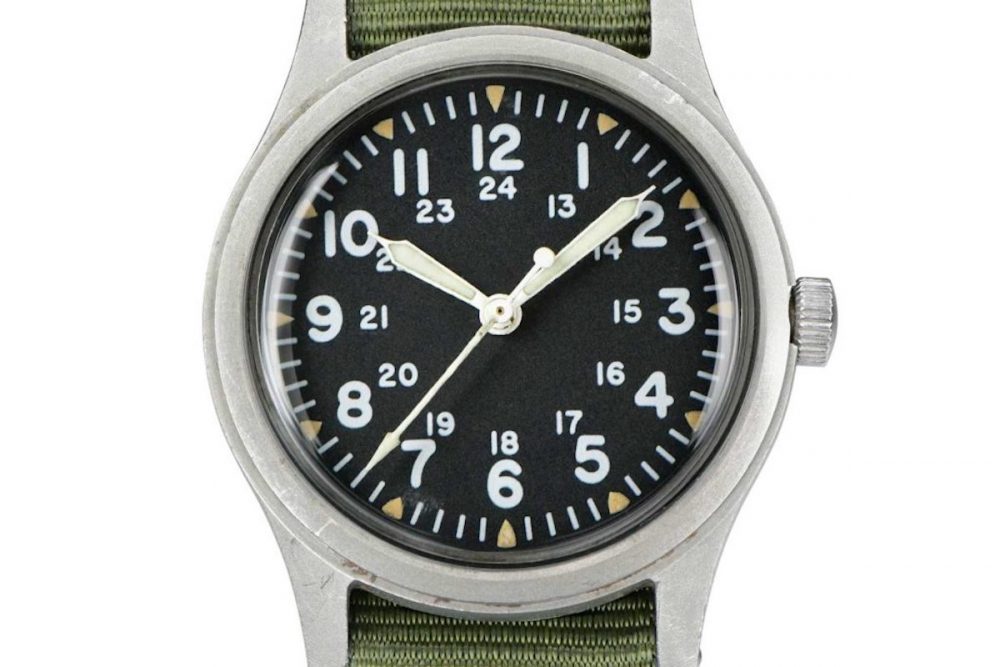 The watch that Hamilton made for these GIs was a 33mm time-only watch with a clear dial layout and notable 24-hour inner scale. Simple and effective, and, like the Hamilton watches worn by the generation before them, these watches continued into civilian life. Not just on the wrists of returned soldiers, they were also sold in army surplus stores and by companies like L.L. Bean and Orvis through the ’80s and ’90s. At this point, the watch’s identity was well established as the Hamilton Khaki Field watch.

In 2019, Hamilton, now part of The Swatch Group, took the field watch back to its roots with a remake of the popular Khaki Field Mechanical 38mm collection, a direct descendant of the military watches of the 1960s, albeit with some welcome modern twists. Today we get the latest evolution of Hamilton’s best-selling model. 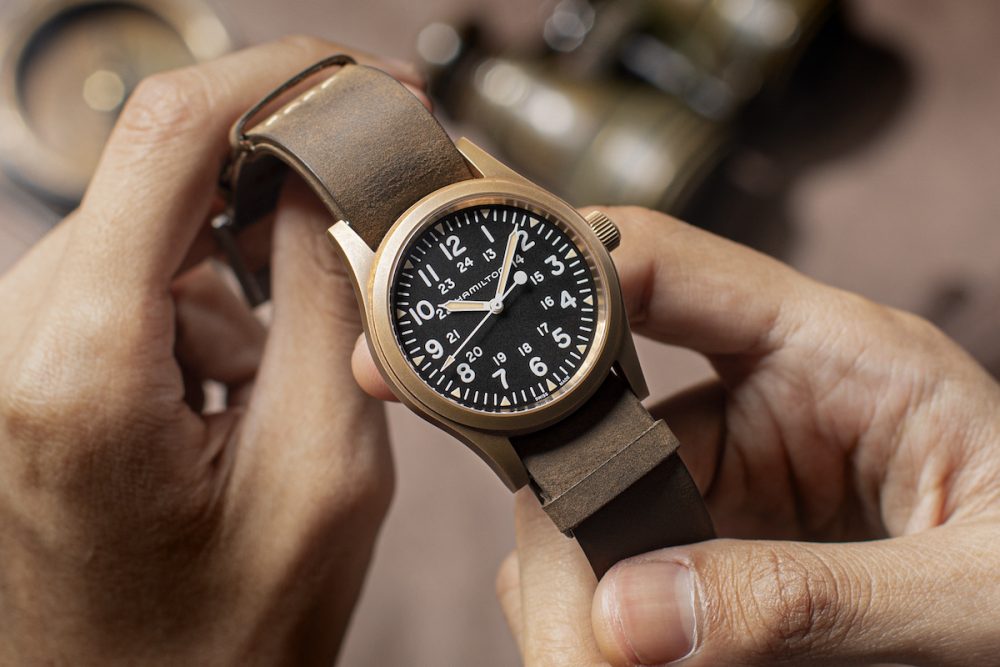 The watch is powered by the unique caliber H-50, a hand-wound mechanical movement with a solid 80 hours of power reserve.(Image: Revolution)

Of course, there’s the black dial with luminous triangles on the hour, both 12- and 24-hour time scales, and hash marks for the minutes. The white hands are also luminous, with beige Super-LumiNova to match the dial. The crystal, unlike its Vietnam-era ancestors, is hard-wearing sapphire, virtually scratch-proof. And the movement is the unique H-50, a hand-wound mechanical with a solid 80 hours (or three-and-a-bit days) of power reserve. It’s wonderful that Hamilton has kept true to the legacy of the field watch by opting to use a manual movement. Naturally there are automatic watches in the brand’s catalog as well, but for this unabashed nostalgia piece, the hand-winder is appropriate and appreciated. The lack of rotor keeps the case slim too, at 9.6mm tall, perfectly in proportion with the 38mm width.

The real talking point about this case is the material. Bronze, an ancient alloy with great corrosion resistance and the tendency to develop a patina unique to its wearer and the environment it’s in, is a popular material in watch cases. Of course it also makes sense in the context of a military-inspired watch, as bronze is a metal commonly used for military decorations and medals. The warm tones and charm of the alloy certainly synergize with the world-weary aesthetic of the Khaki Field Mechanical 38mm beautifully. What’s more, the titanium caseback and 20mm leather NATO strap ensure that the watch won’t leave any patina on your skin, which is a bonus. 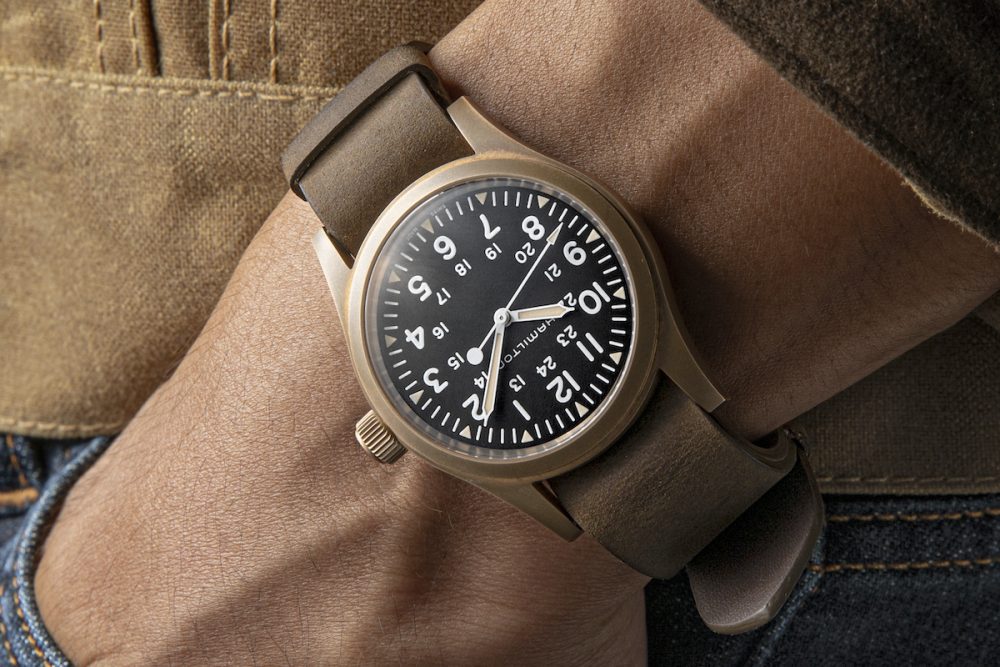 The warm tones and the charm of Bronze beautifully synergize with the world-weary aesthetic of the Khaki Field Mechanical 38mm. (Image: Revolution)

This latest step in the long and winding journey of Hamilton’s field watches manages to both be looking back at the model’s rich past while striding into its exciting future. While the adventures you might take the Hamilton Khaki Mechanical 38mm in bronze on are likely a little less extreme than those of previous generations, the watch still lives up to the rigorous standards and reputation of the field watch. In fact, with its improved mechanical movement, sapphire crystal and a bronze case in need of a patina, this could well be the greatest Hamilton Khaki yet. Add to this the price of USD 825, and you've got a watch that isn't just made for adventure, but asking for one.