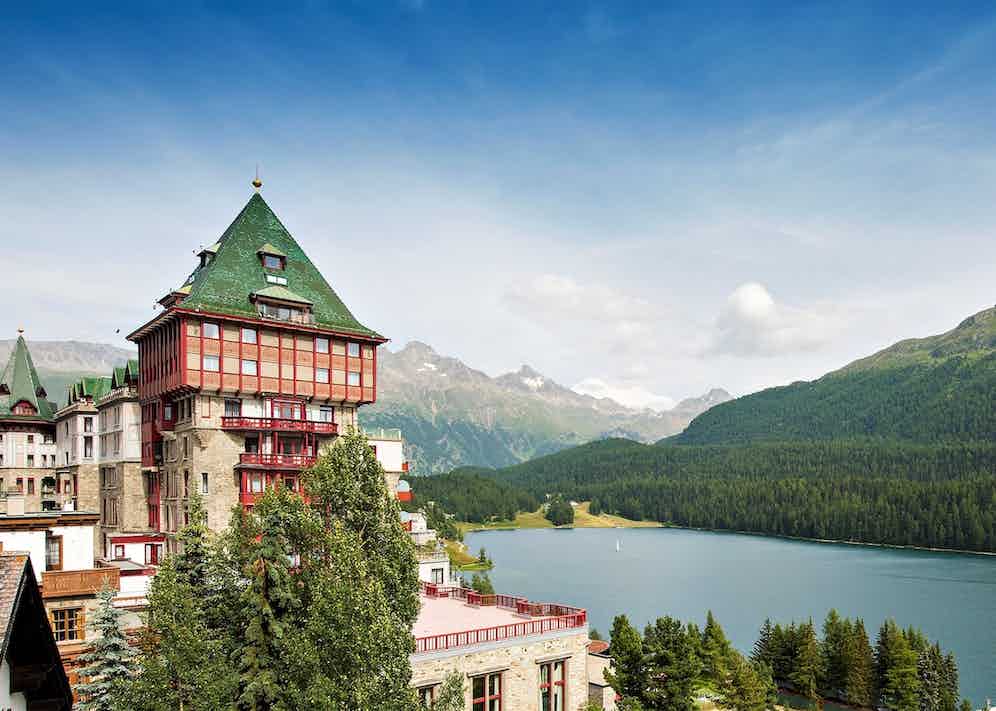 In September, meek patches of snow sit atop the rough peaks of Switzerland’s Upper Engadin. A parade of lush green lark trees stand at ease on the uplands of the valley – only separated by barren tundra spaces and intermittent alpine settlements. One particular town happens to be the star-studded resort of St. Moritz. Peering magnificently over the shimmering aquamarine lake is the Badrutt’s Palace Hotel, a neo-Gothic castle of towers, turrets and terraces designed by notable architects Chiodera and Tschudi. Colonised by a glittering array of film stars, European aristocrats, diplomats and winter sport Olympians, it is undoubtedly the most iconic hotel in the Alps.

The Badrutt’s family hotel dynasty can be traced back to the early 19th century in the nearby village of Samedan, under the chimerical vision of Johannes Badrutt Senior. Two more generations passed by until Caspar Badrutt - a far-sighted strategist opened the doors of the hotel in 1896. History proclaims that economic, political and social revisions can dramatically dictate the outlook of a business. Implications resulting from the outbreak of The First World War did just that. Foreign guests stayed away and employees were signed up for military service.

As if to make up for lost time the roaring 20s arrived holding gold-leaf trimmed coupette glasses spilling with champagne. British film director Alfred Hitchcock visited on his honeymoon and would be a frequent guest of the hotel for many decades to come. Apparently, it was watching a flock of alpine choughs circle around Badrutt’s tower that gave him the idea for his horror classic The Birds. In 1928/29, St. Moritz experienced the highpoint of the decade by acting as the venue for the Winter Olympics. It would set the premises for St. Moritz becoming the most stylish home from home for international jet-setters with the Badrutt’s Palace being the focal-point of louche conviviality. After a wartime interruption of 12 years, St. Moritz once again succeeded in reminding the world of its position as a leading winter sports resort by holding the 1948 Winter Olympics. 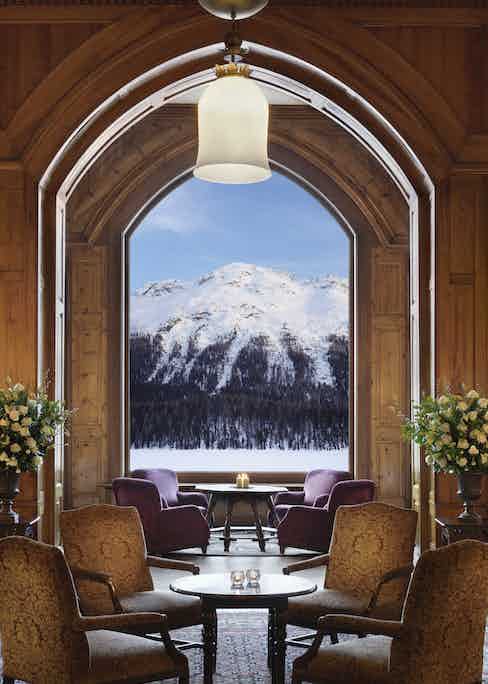 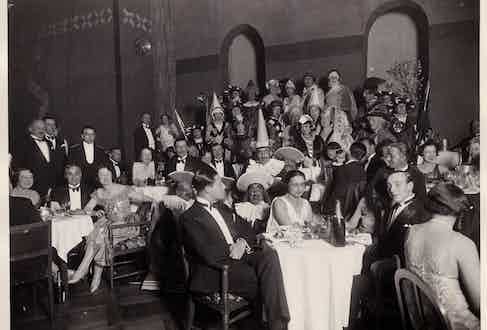 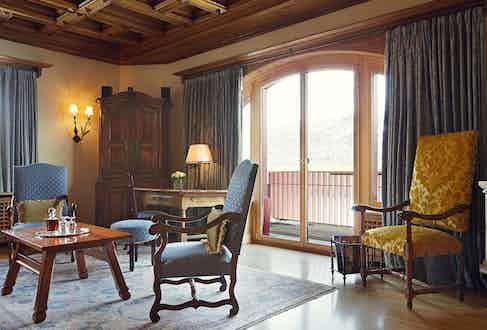 As soon as commercial jet became widespread in the late 1950s, the international elite built a lifestyle around it. One particular figure at the heart of this locomotion was legendary playboy Gunter Sachs. In his early days he would often be seen at the Palace with his new wife Brigitte Bardot, whilst also rubbing shoulders with the Kennedys, Salvador Dali, Gianni Agnelli and Coco Chanel, the latter of whom was the founder of the Corviglia Club – a very famous skiing club and considered one of the world’s most exclusive winter sports alliances. Sachs’ stays at the Badrutt’s Palace were nothing short of legendary. An avid art collector, his extensive collection included masterpieces by Andy Warhol, Salvador Dali and Roy Lichtenstein. Sachs never had to settle for second best and so it was at the Palace where in 1967 he took the lease for the penthouse, which was of course in the iconic tower of the hotel. Where else could he hold ‘court’ but in probably one of the most exclusive penthouses on the planet? At that time, he was undisputedly the epicentre around which the ‘jet set’ were drawn. He would often be seen in his famed white trousers, very similar to the white cotton back-buckle pleated trousers by Neapolitan tailoring house Dalcuore offered on Therake.com. He regularly wore an open necked silk shirt and if the weather permitted a finely tailored single-breasted jacket. To accentuate his long-limbs he followed the Neapolitan tailoring characteristics by opting for jackets cut with a shorter back. The brown wool houndstooth check Napoli single-breasted jacket by De Petrillo and the navy wool unlined single-breasted jacket by Rubinacci are uncanny Neapolitan takes on the aforementioned jackets.

Sachs was also an experienced winter sportsman, with days spent on the daredevil Cresta run, at the Bob Club, of which he was president or skiing and lunching on the slopes. Many feel the late 1960s and early 1970s was ski style at its height, with fellow skiers witnessing graphic colours boldly streaking by on every turn. Moorer’s white cotton quilted archimede parka is a contemporary answer to the renowned white coat that Sachs used wear. He usually chose goggles for eyewear, but with the region boasting 322 days of sunshine each year, Persol's pilot frame sunglasses with polarized blue lenses are certainly an aviator style to fit right in with the era. 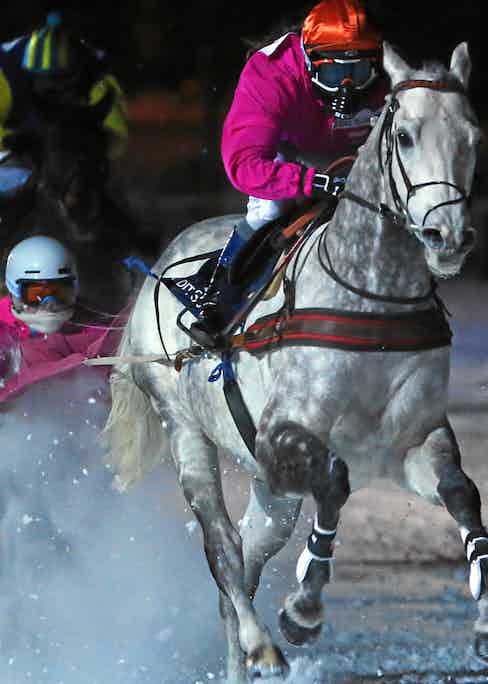 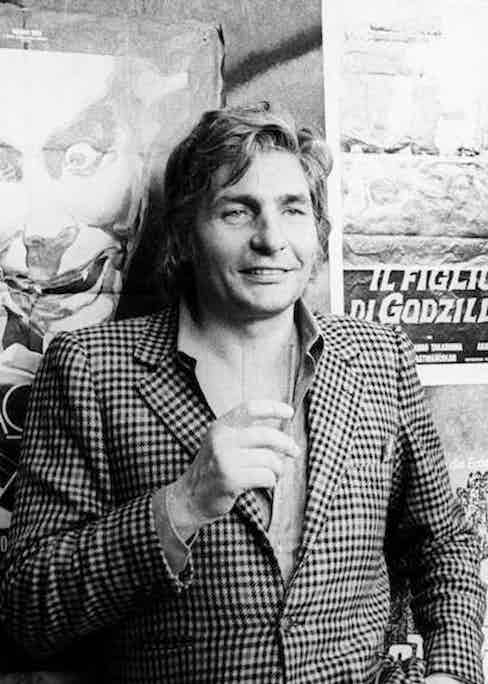 It was on one of those pleasant days of sunlight that I arrived into St. Moritz train station to a gentleman sporting white gloves, as part of an immaculate uniform. He was the hotel chauffeur who transported us in one of the hotel’s fleet of Rolls Royce cars, one of which is a 1968 Phantom that once belonged to the British royal family. With our luggage whisked off to our rooms on gold-framed trollies, we were escorted inside into the lobby area, otherwise known as Le Grand Hall, an authentic combination of true arabesque woodwork, Persian carpets and Gothic-style arched doorways. Dark oil paintings of the Italian school hang in clusters on the walls, one of which is rumoured to be un- attributed Caravaggio masterpiece – quite possible considering the displacement of people in wartime Europe.

It isn’t just centuries-old art that you can be surrounded by - there is an evolving cultural ‘scene’ in St. Moritz. At the beginning of the year, Hauser & Wirth launched their third gallery in Switzerland located in the Palace Gallerie, opposite the hotel’s main entrance. Depending on the season you will be warmly greeted by director Stefano Rabolli Pansera. He has the rare ability of inducing your artistic senses by imparting genuine enthusiasm and a deep knowledge of the gallery’s art. French-American artist Louise Bourgeois inaugurated the space with a solo presentation of her work. A short journey just northeast of St. Moritz lies the alpine village of Susch - on the route of the ancient pilgrimage from Rome to Santiago. Beside a rippling dove-grey stream, Swiss architects Chasper Schmidlin and Lukas Voellmy have remarkably excavated into a mountain and restored a 12th-century monastery that is now Muzeum Susch. Inside, many grotto-like underground areas seem to defy all space logic. A tunnel connects buildings on the site on either side of the road shifting 9,000 tonnes of rock in the process. Director of Muzeum Susch, Mareike Dittmer conducted an absorbing tour that took us into the creative life of Emma Kunz. Her ‘energy-field’ drawings were made using the pendulum, to detect vibrational fields to seek answers relating to politics, the environment, philosophy and the personal. In order to leave the idea of spiritual-inquisition open she left her works undated, untitled and without meaning. Kunz’s own relationship to healing rocks, patterns and nature manages to marvellously correlate to the deep connection of the building’s architecture to its alpine surroundings. In view of the calibre of art on show in the St. Moritz area, there is evidence to suggest the town can be considered a stopping point, purely for its emerging art scene. 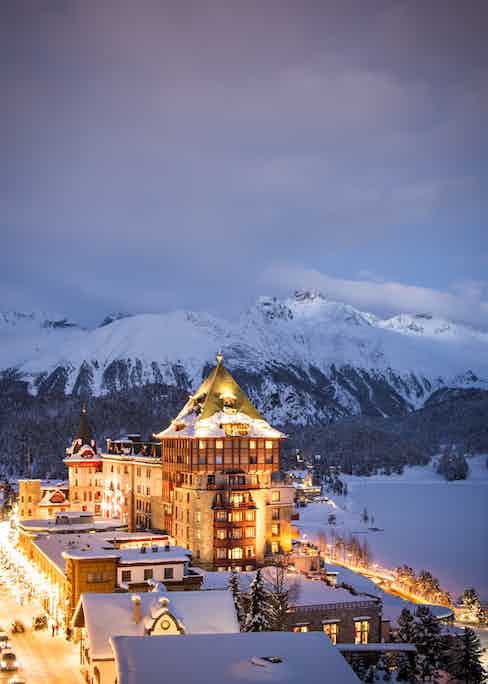 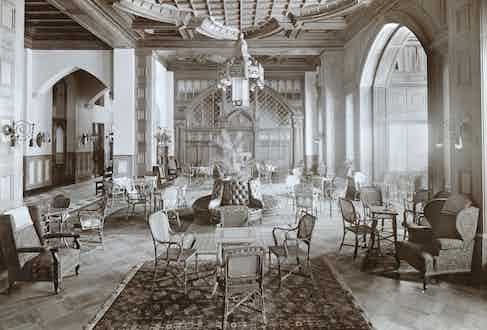 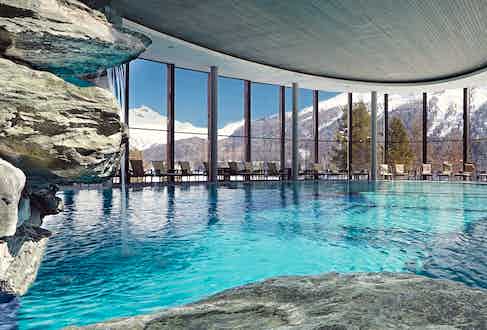 Rather than skiing in the daytime, I’d always imagined that it would be the evenings at The Badrutt’s Palace that would somehow throw you off course. Meandering single file, down windy stairs, we entered a candlelit tunnel, flanked by shelves containing 30,000 bottles of rare wine. The supper’s subterranean surprises didn’t stop there. For dessert we entered an underground kitchen basement to some hard-hitting house music, with the most phenomenal array of desserts you have ever seen. Filled with young European aristocrats staying for a wedding, the wood-panelled Renaissance Bar provided the perfect idyll for a night-cap or two, where the friendly barman keep serving late into the night until people have staggered back to their rooms.

It seems that during a stay at the Palace, one is never far from a wild or peculiar event. The hotel is famous for its fancy-dress parties, particularly at New Year’s Eve, where guests book a year in advance. On one famous occasion (in less bureaucratic days) the staff filled the swimming pool with sea lions and on another they shipped in a live elephant as a birthday gift. The Badrutt’s Palace is that rare opportunity to stay in a hotel full of old-fashioned charm and elegance, balanced with no small amount of hedonism.

For for information, visit myswitzerland.com