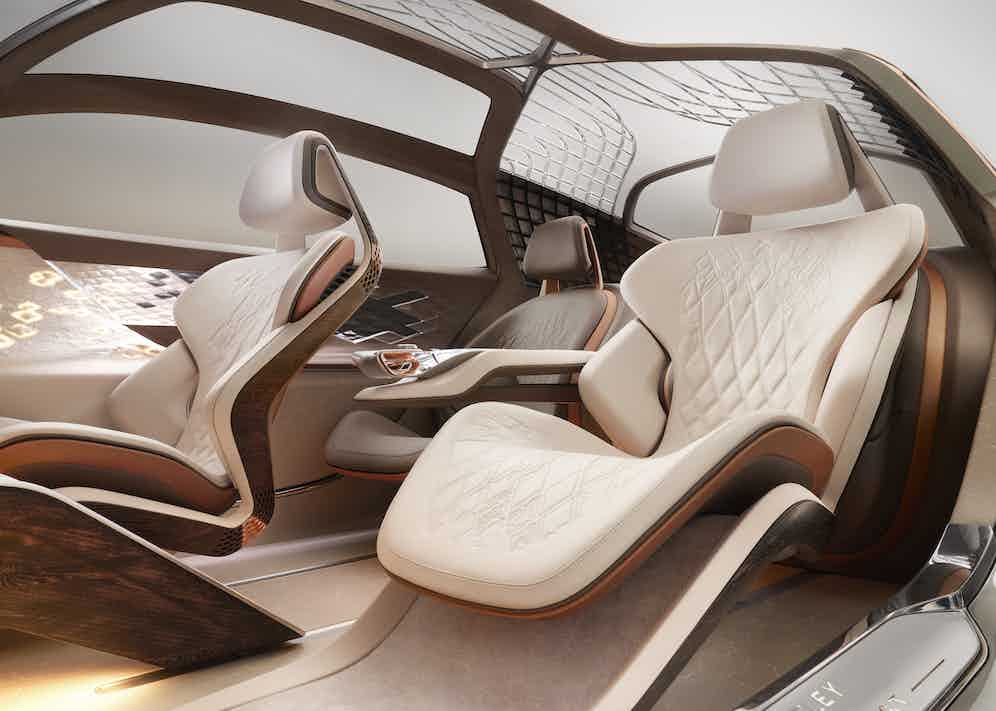 How many times have you heard the trope, "It's what's on the inside that counts"? It stands true for many a context, not least car building. What you see is not always what you get in the world of automobiles. Luxury cars today have a dual mandate - brains and brawn, and what you see on the outside must invariably be replicated in kind on the inside. When Bentley created the EXP 100 GT, on the one hand to celebrate its centenary but on the other to usher in the next century of car design evolution, it's task was to build something visually arresting on the exterior and nothing short of life-changing in the interior. What they have come up with is astonishing.

The interior takes Bentley craftsmanship in a new direction by seamlessly fusing sustainable materials with technology. It incorporates new directions being explored by Bentley, including the use of light in creating a wellness-enriching environment and Adaptable Biometric Seating that adds to the feeling of wellbeing. In short, Bentley's aim was and is for the passengers of the vehicle to step out of the car at the end of their journey feeling better than when they stepped in at the beginning. To enhance a feeling of wellbeing, the EXP 100 GT uses air curation to bring in fragrances from the natural world while keeping city pollution out. Intelligent technology is also designed to disappear from view when you want a more mindful experience. So whether you want to be absolutely tuned in to the driving experience or completely zoned out in order to concentrate on other things, both will be entirely possible. 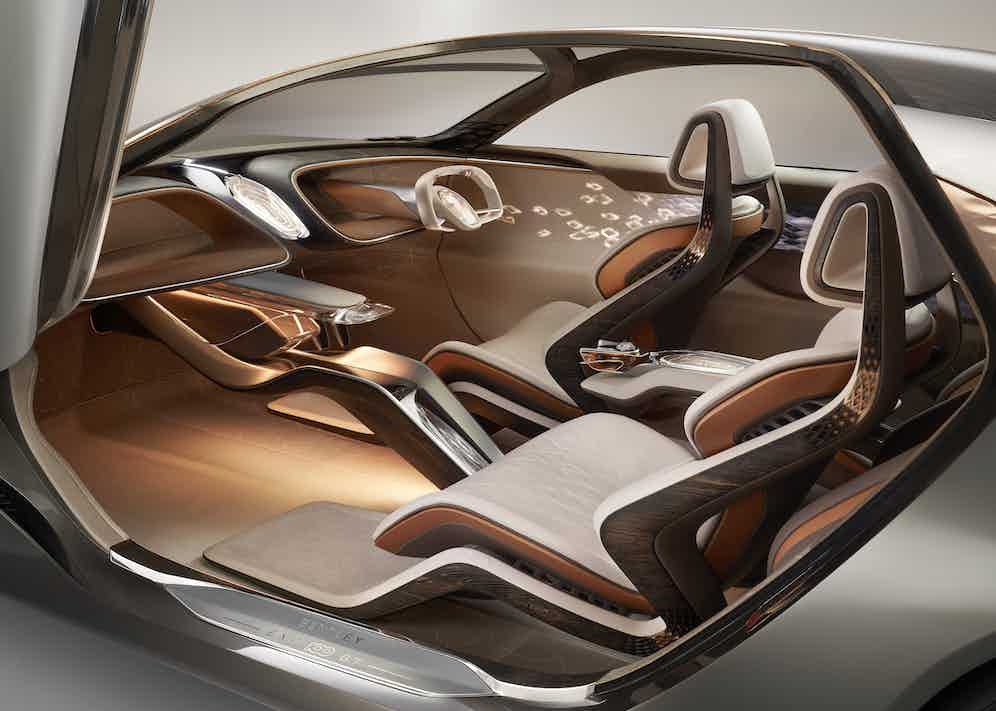 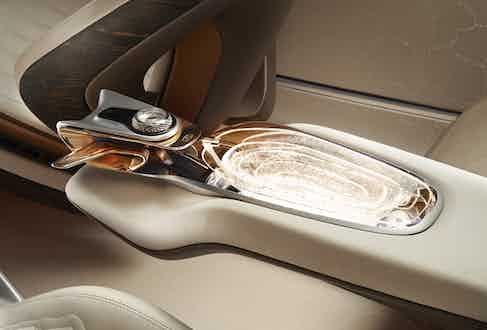 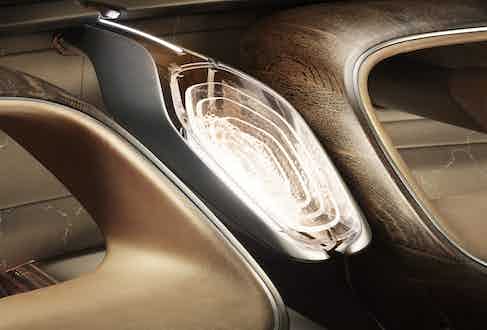 "One of the most wonderful things about a future concept is that there are no boundaries, but the reality is that we were challenged to make sure that there was an engineering roadmap that supported every feature within the car," says Head of Interior Design, Brett Boydell. "So this is not pure fantasy, this is a real statement of intent of where Bentley wants to get to."

Light plays a key role in the experience of the EXP 100 GT. Alongside metal, wood and leather, Bentley is introducing light as their fourth material precisely because it plays such an integral role in the vision of and out of the car. Take the roof for example, which harvests natural light using prisms and projects it into the cabin via fibre optics. A mixture of this harvested and sentient light will relieve drowsiness, ease motion sickness, and boost passenger serotonin, the latter of which, as all parents know, is a game-changer for long family journeys.

Introducing a new definition of self-care, your driving experience can be curated according to your surroundings thanks to our innovative car design. The AI ‘Capture’ mode ignites the senses by bringing the outdoor environment in, whether that’s sea breeze or forest aroma, meanwhile cocooning you from dense traffic pollution and filtering out unwanted smells. As if soaring with the roof down, the air purifier fills the cabin with clean air when passing through the countryside whilst unwanted air is recycled to aid aerodynamics. Scents (at least the pleasant ones!) can be channelled in from outside, simulating an open-top experience. 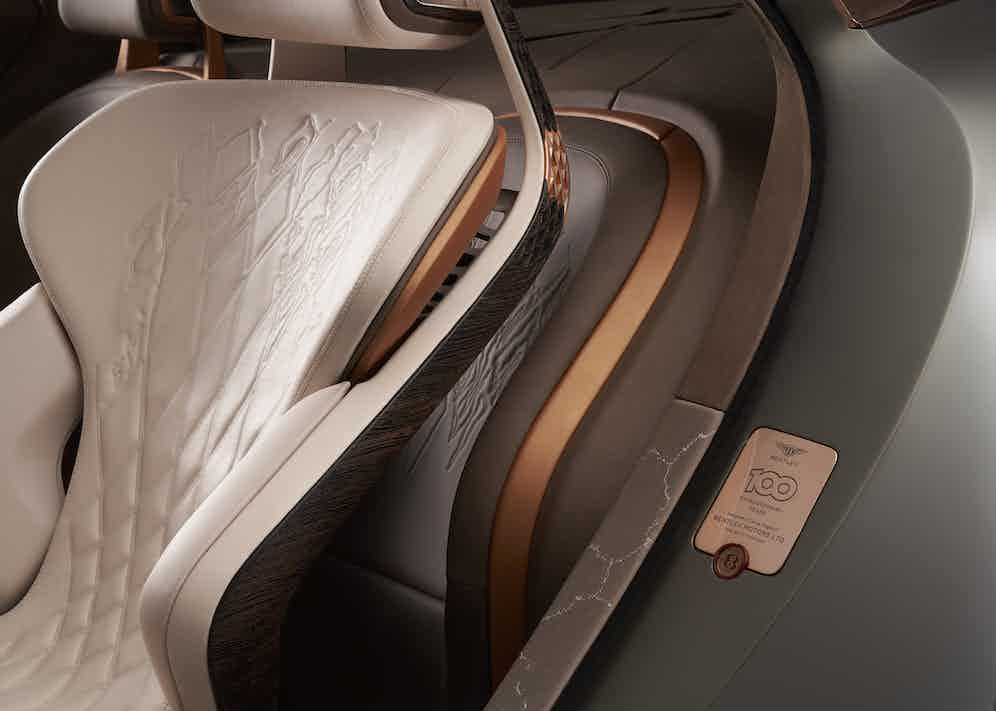 The design process was every bit as symbiotic as the interplay between interior and exterior: "Very often in cars, we'll start with the exterior proportions and then fit the interior into it with a package that we then progress and design. This started the opposite way around, so we started with a two-seat autonomous layout, pure luxury at its very best, with everything that we could see as far as features providing for those journeys, those extraordinary journeys of the future. But you'll still spot key DNA, things that we have in our cars today. As the magnificent door opens, you can see it is still a Bentley in every way."

Epitomising slow design and sustainable innovation, Bentley chose to fit the module with a carbon-dated ancient oak which has been preserved within the deep peat of the East Anglian Fenland basin for over 5,000 years and was supplied by riverwood specialists. These gigantic Fenland Oaks died standing in water as a result of flooding in the ancient high forests. Bentley has introduced a material fusion that challenges oak's traditional aesthetics and inspired by the Japanese art of Kintsugi, have threaded recycled copper through the wood to highlight the beautiful, natural flaws.

The driving seats themselves are design masterpieces that would draw the eye in the most luxurious of living spaces (I suggested that Bentley should put them into limited production - the idea wasn't immediately dismissed so there's hope yet!). What Boydell and his team have created in the EXP 100 GT is a marker to not only the rest of the automobile industry but to the design industry too. Bentley aren't imagining the future, they are creating a roadmap for it and it's one we should all be following.