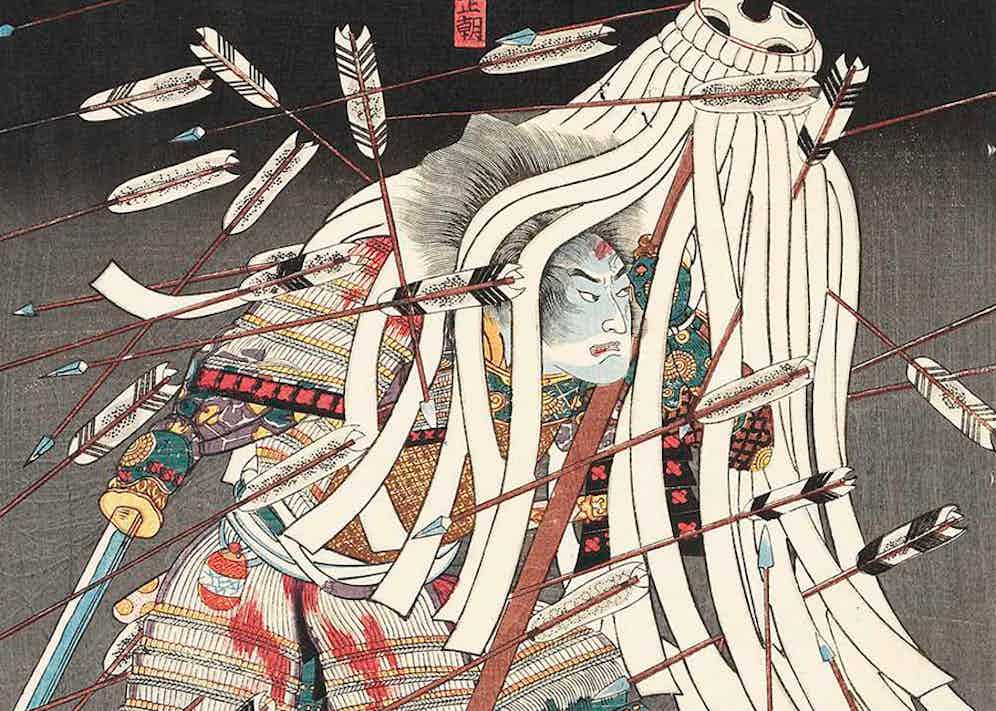 Pocket square specialists Rampley & Co have launched five new pocket squares portraying a selection of vintage Japanese designs. Each unique pocket square visually encapsulates the rich histories of Japanese samurai culture. The British brand uses the finest silks, all of which are hand-rolled to give each pocket square that perfect finish. They're wearable talking points, so make sure you bone up on the back stories...

In appreciation of the Edo period between 1603 to 1868 which was characterised by “no more wars," and popular enjoyment of the arts and culture, Rampley & Co. have launched a collection of 5 beautiful pocket squares. This scene depicts Maples at Mama which is included in the series100 Views of Famous Places in Edo' ('Meisho Edo hyakkei'), published by Uoya Eikichi in 1857. This stunning landscape was painted by Hiroshige shortly before his death.

In honour of the samurais in Japanese civilisation, this colourful image depicts a samurai in full dress, holding up a banner in front of the city on water. It's an action, representing that period when the samurais became unchallenged rulers. This particular painting is drawn from the ‘sewamono' which is the genre of contemporary setting plays in Japanese traditional theatre.

Hatsuhana in Prayer Under the Gongen Waterfall

This reviving image is taken from the series called Biographies of Wise Women and Virtuous Wives. Hatsuhana is in prayer under the Gongen waterfall in Hakone and as a result her crippled husband is cured. Utagawa Kunisada was a Japanese ukiyo-e artist born in Honjo, an eastern district of Edo which is now known as modern-day Tokyo. He was a designer of woodblock prints in 19th century Japan.

The Last Stand of the Kusunoki Clan

To commemorate an earlier part of Japanese history where wars were more prevalent, this striking image with an array of colourful arrows signals the last stand of the Kusunoki Clan, at the Battle of Shijo Nawate in 1348. The battle was fought between the armies of the Northern and Southern Emperors of Japan. The Southern army which was lead by the son of Kusunoki Mashige (the head of the clan) was attacked at Yoshino. The battle ended in a Northern Court Victory.

The 47 Ronin Gather For Their Night Attack on Moronao

This colourful design memorialises the revenge of the forty-seven Ronin, also known as the forty-seven Samurai, the Ako vendetta, or the Genroku Ako incident (Genroku ako jiken) which took place in Japan at the start of the 18th century. One noted Japanese scholar described the tale as the country's 'national legend'. It recounts the most famous case involving the samurai code of honour, bushido.