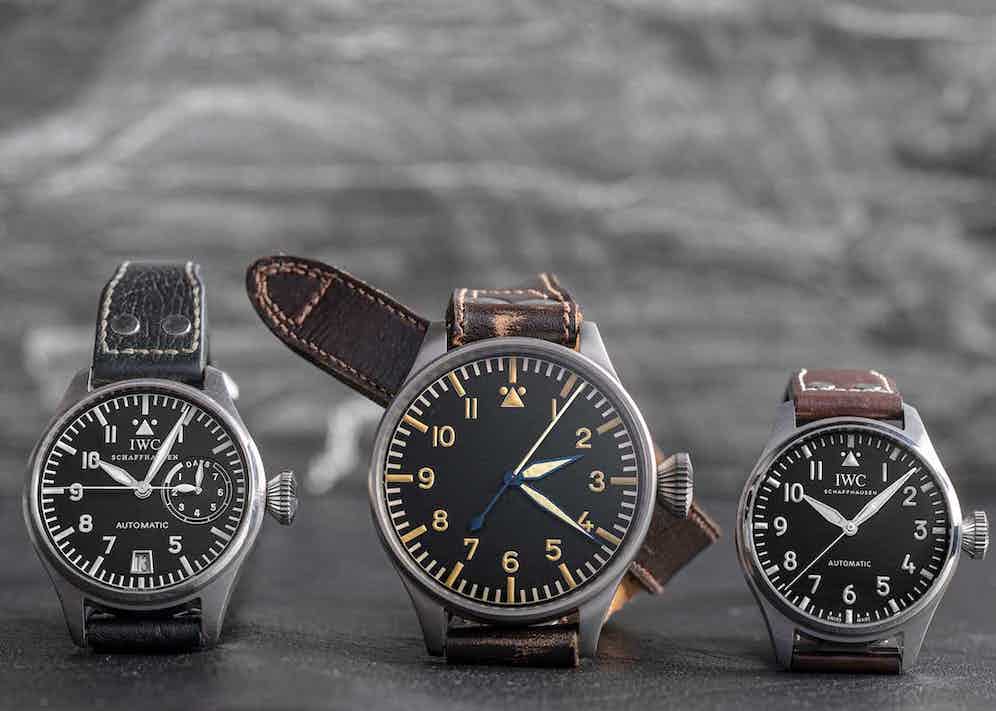 Few watches can claim as pure a sense of purpose as IWC's Pilot's Watches. The iconic design, built for purpose and legibility, is instantly recognisable. The first of IWC's Pilot's watches dates back to 1936, with the reference 436 Mark IX. This watch featured bold, stylised Arabic numerals and even a rotating bezel with a luminous marker for measuring elapsed time. And while the spartan dial design of this original bears the hallmarks that we have come to associate with IWC's Pilot's Watches, the defining example of the genre is the reference 431. 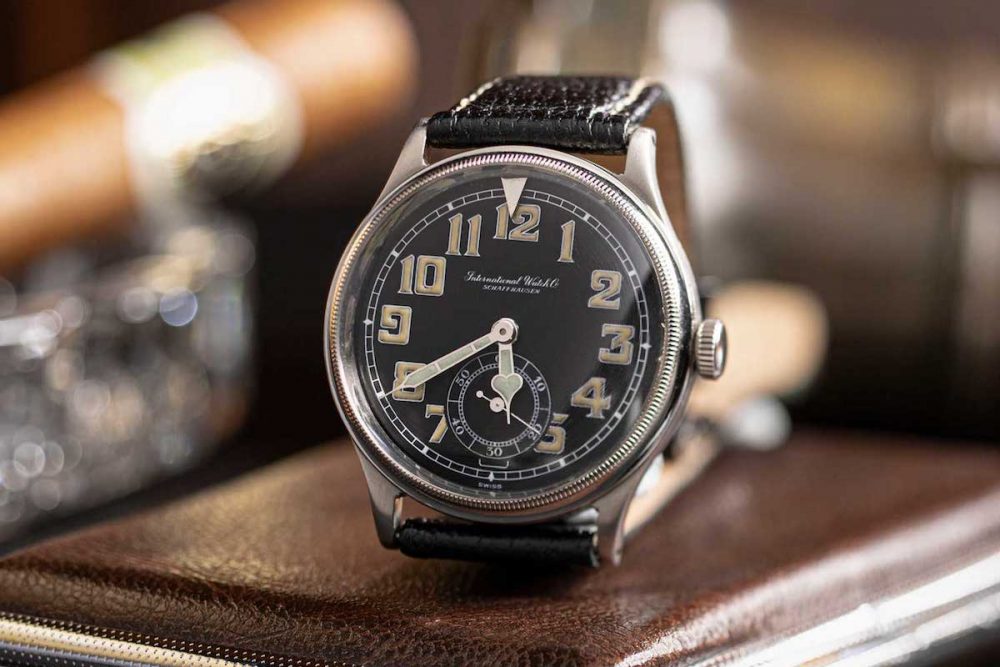 IWC produced 1000 examples of reference 431 in 1940, a military navigator's watch known as 'B-Uhr'. Today the watch has a different name. The Big Pilot. This massive 55mm watch, with its sword-shaped hands, inset Arabic numerals and clear minute track with that triangle at 12 and an oversize, onion-shaped crown for easy use while wearing flight gloves. This formula was followed on the legendary Mark XI, clocking in at a more wearable size than the reference 431. The 36mm Mark XI was initially commissioned by the Royal Air Force and met their exacting standards thanks in no small part to the mighty Calibre 89, designed by Albert Pellaton and protected by a screw-down caseback. So popular was the design that its use filtered out to other Air Forces, including the Australian RAAF, the New Zealand NZAF and the Royal Navy's Fleet Air Arm. 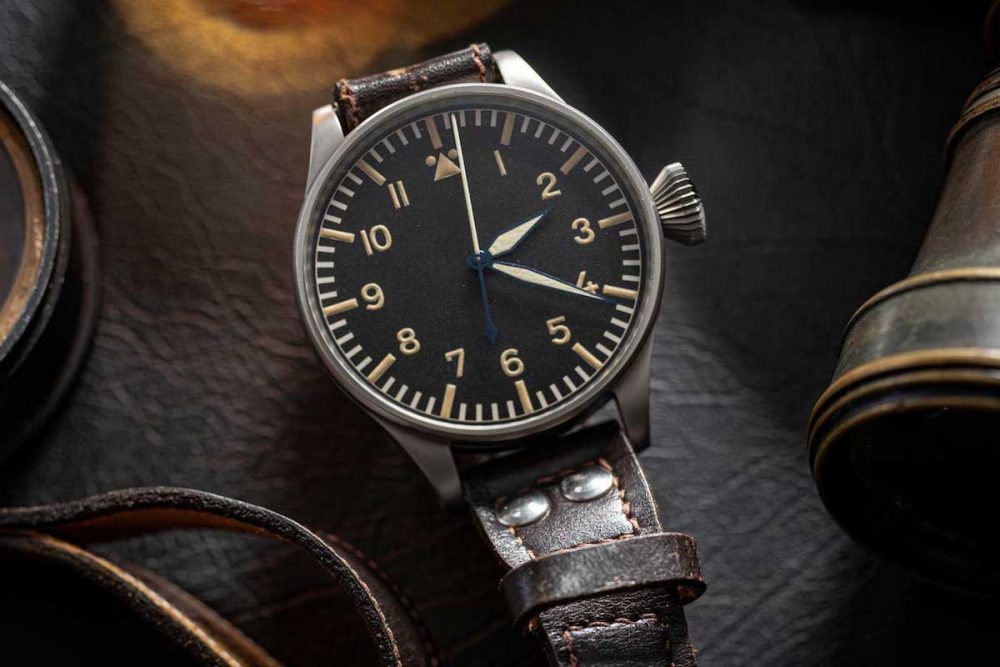 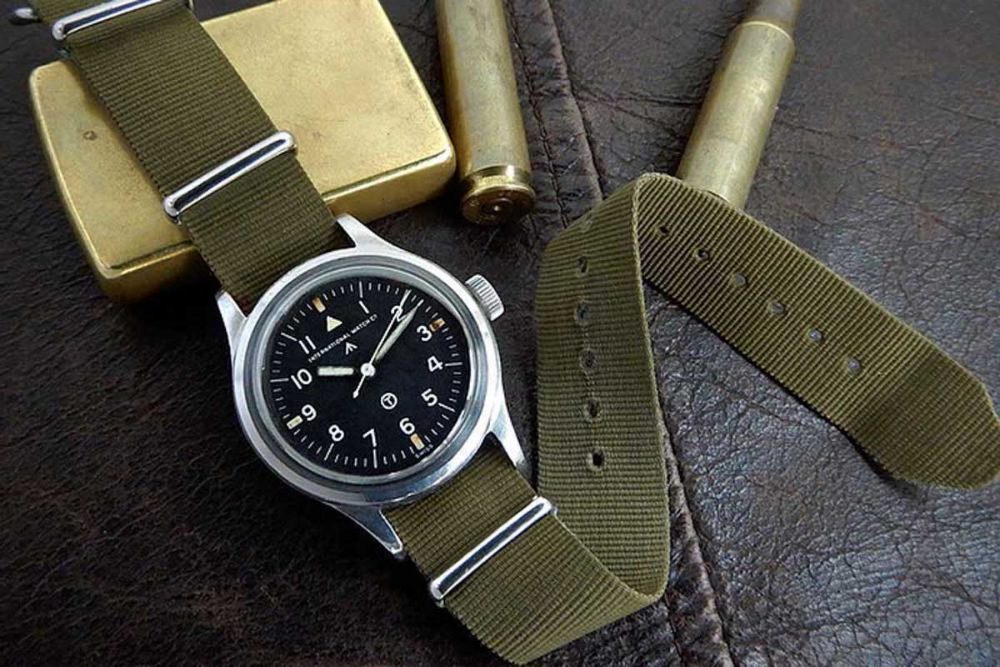 The IWC Mark XI powered by Calibre 89 was made for the Royal Air Force in 1951 (Image: fullywound.com)

Reborn on the wrist

It would be some decades until we saw new iterations of the Pilot's Watch, but the design was back with a vengeance in the 1990s when the brand was riding high the wave of the mechanical watch renaissance. In 1994 the Mark XI was succeeded by the Mark XII, which saw the addition of straight hands, an automatic movement and a sapphire crystal, amongst other improvements.

IWC's time-only Pilot's Watches have evolved since then — we're now up to Mark XVIII — but the IWC Pilot's Watch Automatic 36 still carries much of the spirit of those original aviation watches. The smaller case size is in line with the vintage aesthetic, and while it's been dressed up a little on the brown alligator strap, put it on a grey NATO (which would perfectly match the anthracite dial), and you've got a perfectly on-point modern Pilot. 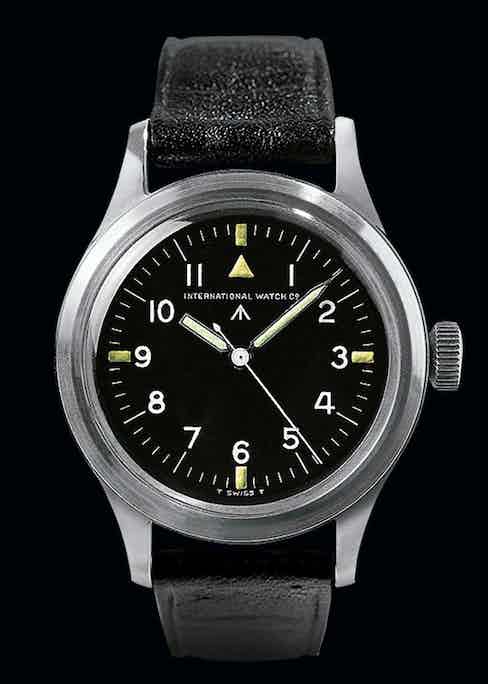 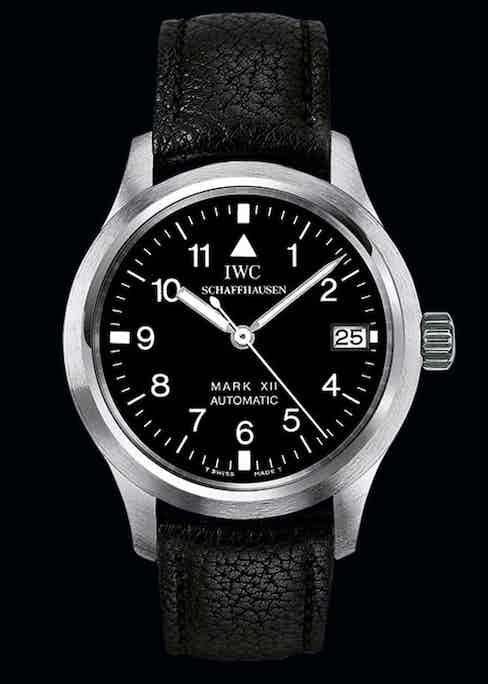 Introduced in 2016, the IWC Pilot's Watch Automatic 36 was "intended for watch lovers both male and female with a smaller wrist. Powered by caliber 35111, the watch features a rapid­-advance date display in addition to the hour, minute and seconds hands. It's still fully antimagnetic, with a soft iron inner case and dial, and water resistant to 6 bar, with a screw-down crown.

One of the most attractive features of this watch is the sleek slate-coloured dial that lends it a dressy look and feel. The Pilot’s Watch Automatic 36 comes with a dark brown alligator leather strap from Santoni. The present example at our shop is from 2020 and the watch comes with a complete set of box and papers and Watchfinder’s two-year warranty. 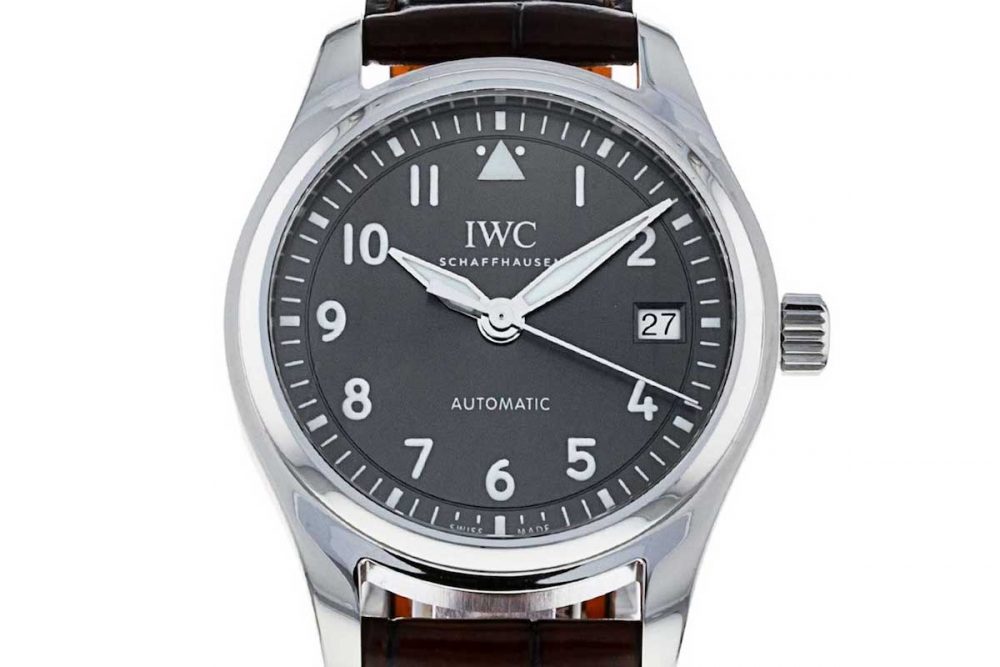 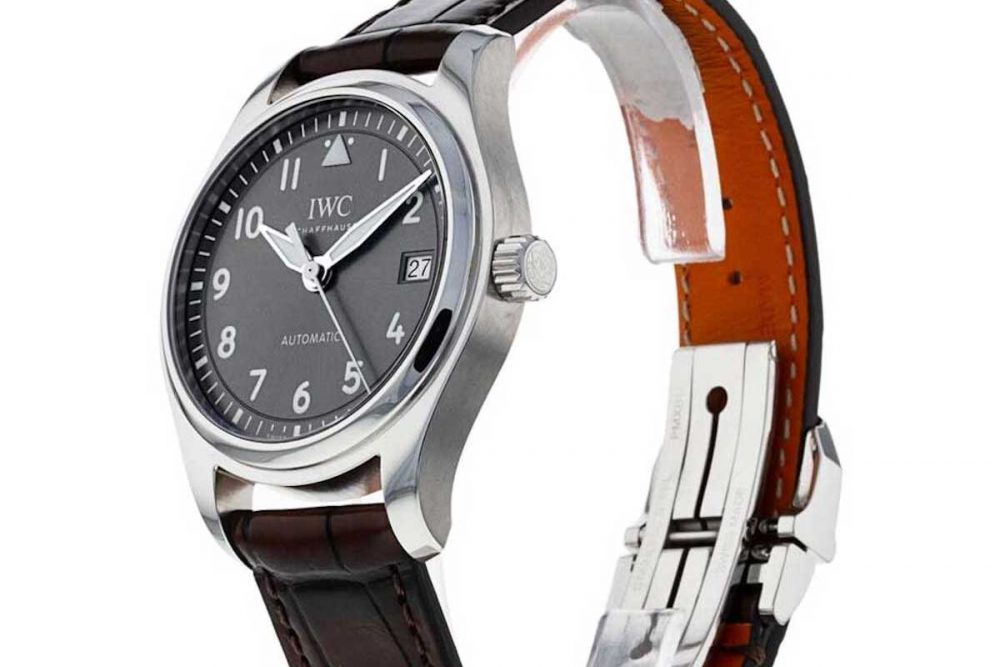 The present example at our shop is from 2020 and the watch comes with a complete set of box and papers and Watchfinder’s two-year warranty. 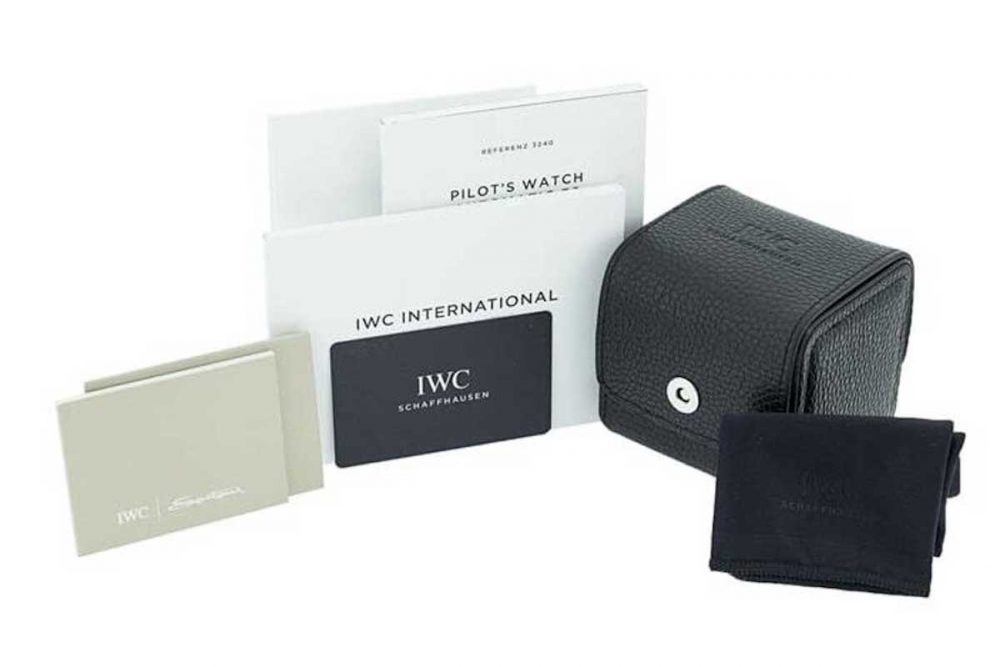 Another significant pilot released in 1994 was the 3705 — a Pilot's chronograph that pioneered the use of ceramic in watches and gave birth to an aesthetic that stood out for all its stealth appeal. This design was revisited recently with the critically acclaimed IWC Pilot's Chronograph Pilot's Chronograph "Tribute to 3705".

Throughout the 90s, IWC expanded its Pilot's offering, with numerous dials, complications and calibres joining the catalogue. But in 2002, the brand revisited a classic that became not only a defining watch for the brand but also shaped trends in the watch industry for a generation. That watch was the reference 5002, better known as the Big Pilot. This new watch, heavily inspired by the reference 431 B-Uhr, was a 46.2mm watch that honoured the codes of the original and boasted an impressive 7-day power reserve. Not only did the Big Pilot make an impression on the wrist, but also on the design of future watches, it was a forerunner of the 'Big Watch Trend' that dominated the 2000s. 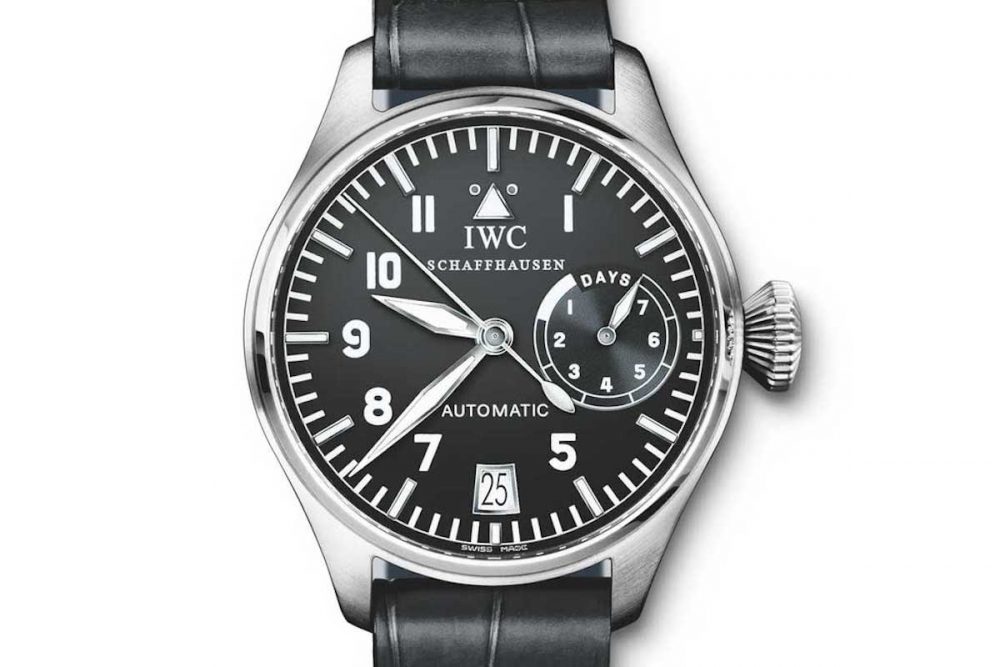 Introduced in 2002, the Big Pilot reference 5002 was heavily inspired by the reference 431 B-Uhr 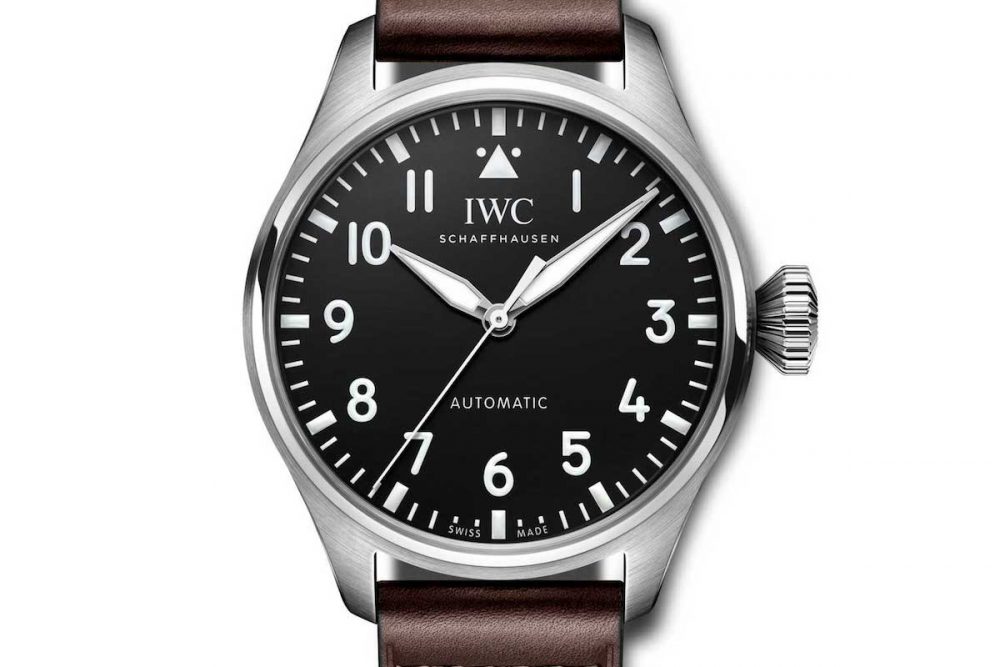 In 2013 IWC began a partnership that intertwined the history of aviation and literature in an intriguing way; a relationship with the Fondation Antoine de Saint Exupéry and the 'Le Petit Prince' dials. In addition to being the author of one of the best-loved works of literature — The Little Prince — Saint Exupéry was also a peerless and pioneering aviator. IWC's Le Petit Prince editions are characterised by their vivid blue starburst dials and charming casebacks with engravings featuring the eponymous royal figure. These dials can be found across the Pilot's collection and are well suited to simpler designs such as the Mark XVIII and more complicated offerings, including chronographs. 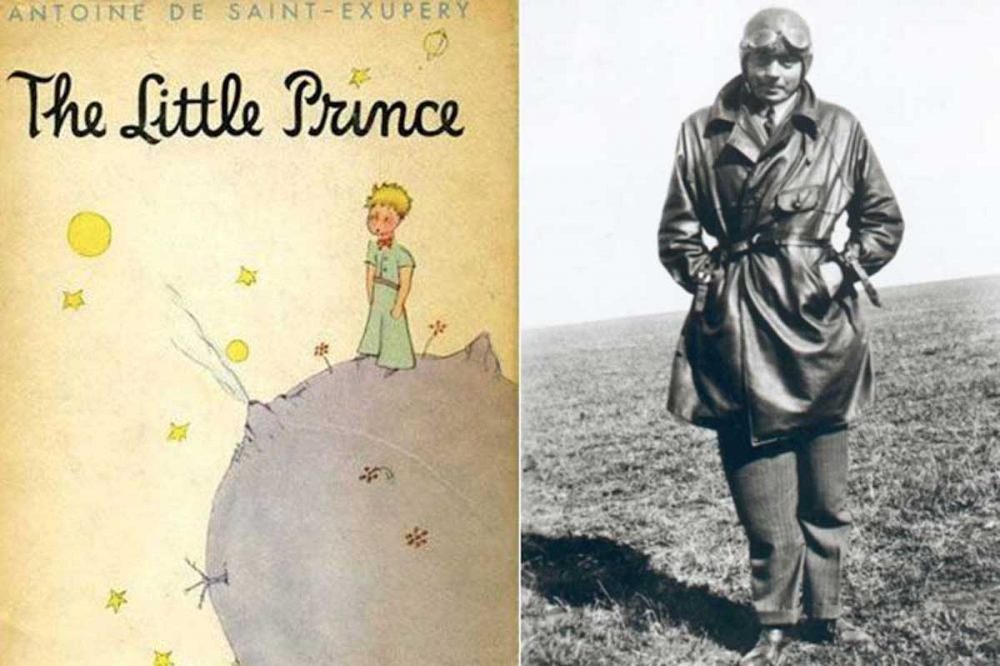 Saint Exupéry wrote the novella Le Petit Prince in 1942. Since then, it has sold more than 140 million copies and is available in more than 300 languages. 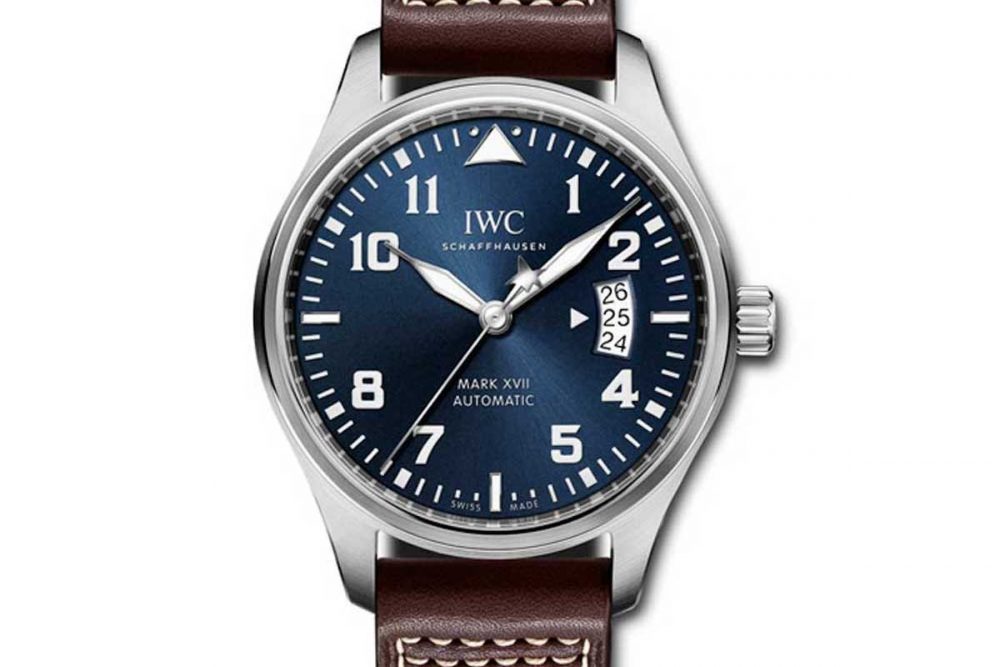 The Le Petit Prince models made their way into the Pilot’s collection in 2013. The very first model, reference IW326506, was based on the Mark XVII time-only Pilot’s watch.

While the first IWC watch dedicated to Saint-Exupéry was a pilot chronograph (Reference IW3717) released in 2006, the Le Petit Prince models made their way into the Pilot’s collection only in 2013. The very first model, reference IW326506, was based on the basic Mark XVII time-only pilot’s watch.

The reference 327004 at our shop is a particularly eye-catching timepiece powered by an automatic 35111-calibre movement that promises a 42-hour power reserve. With its soft-iron inner case, it is optimally shielded against the influence of magnetic fields. The midnight blue dial and the brown calfskin strap with its cream coloured quilted stitching is reminiscent of Saint-Exupéry’s flight suit. The present example from 2017 comes with a complete set of box and papers and a two-year warranty from Watchfinder. 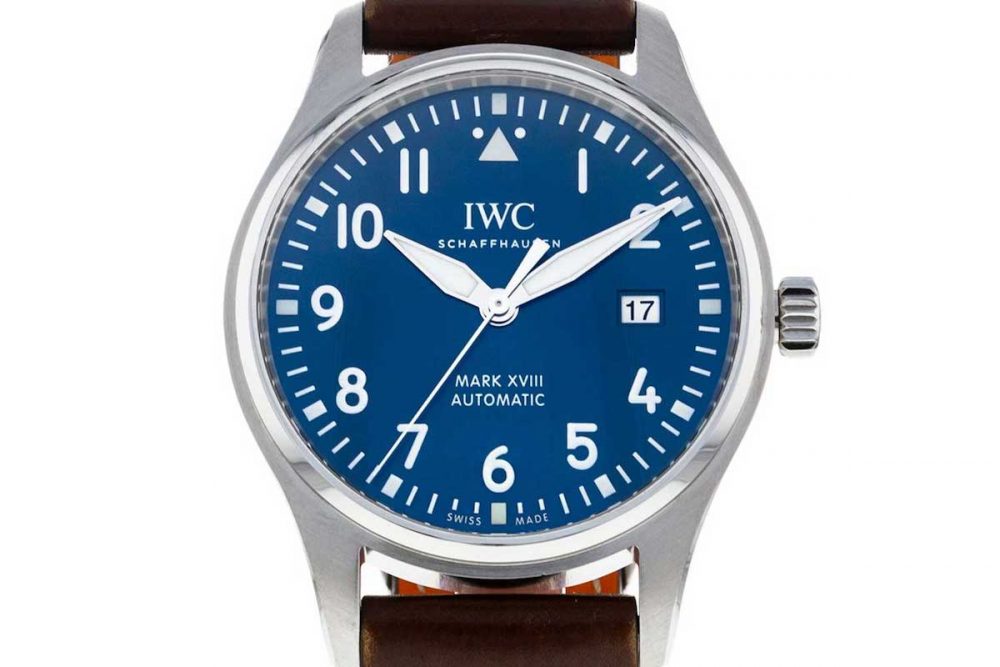 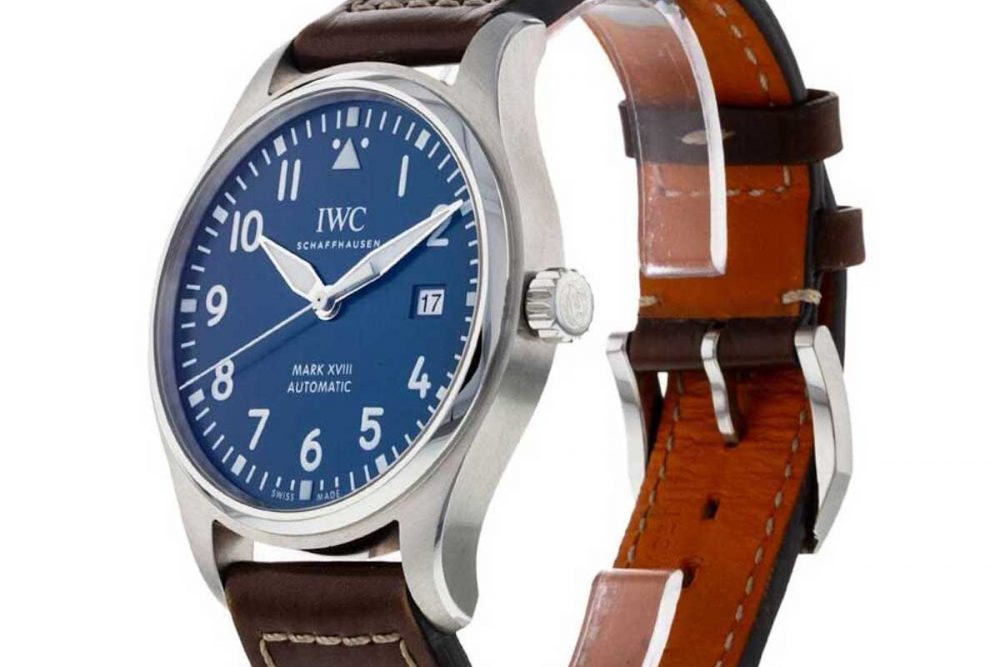 The present example from 2017 comes with a complete set of box and papers and a two-year warranty from Watchfinder.

The unmistakable blue dials and elaborate engravings on the casebacks have made the “Le Petit Prince” editions highly covetable in collectors’ circles. The Pilot’s Watch Le Petit Prince ref. IW377714 that we have in our shop this month is from 2016. It features a gorgeous midnight blue dial and has an engraving of the little prince with his cape and sword on the caseback. The watch is water-resistant to 6 bar and is offered on a calfskin strap from Santoni. We have got this particular piece covered under Watchfinder’s two-year warranty and the added bonus is the set of original box and papers that come with the watch.

Powered by the robust calibre 79320 chronograph movement, the Pilot’s Watch Chronograph Edition “Le Petit Prince” has all the trademarks of a high-performance watch: precision, functionality and reliability. 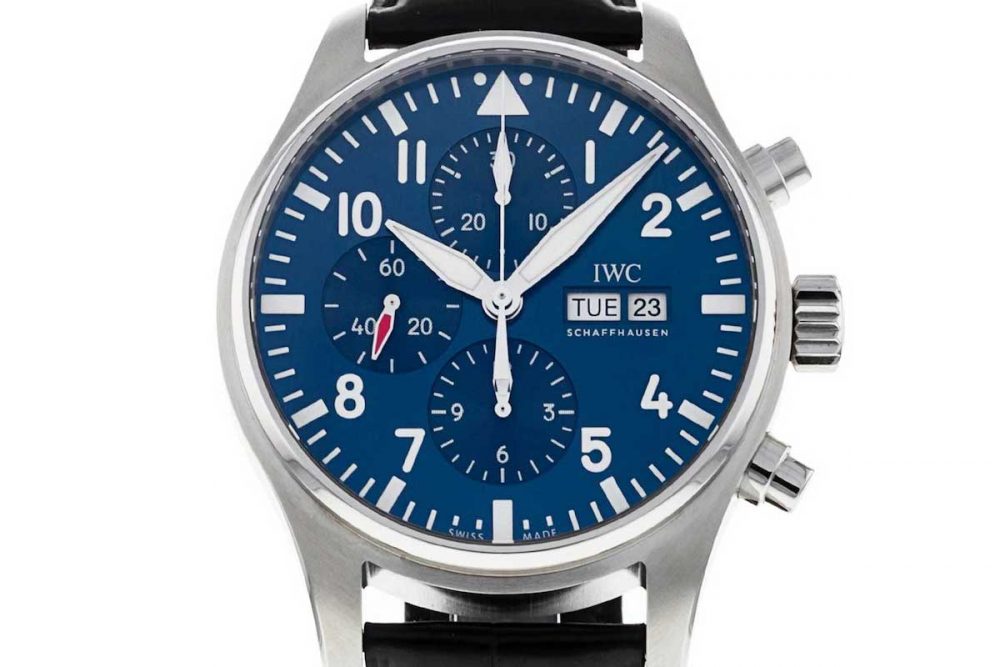 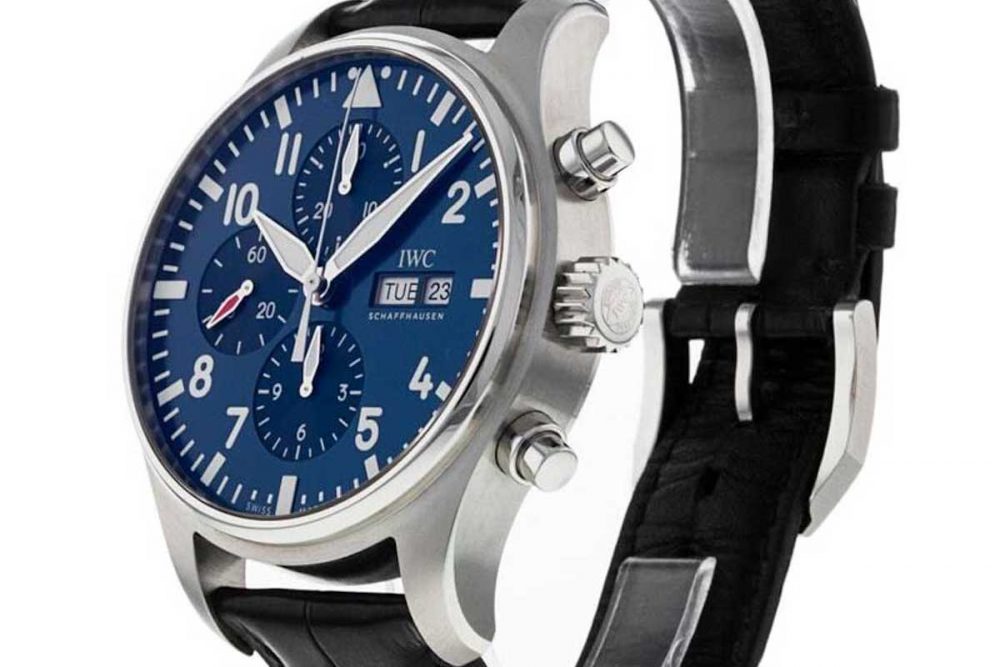 The watch features a gorgeous midnight blue dial and has an engraving of the little prince with his cape and sword on the caseback. 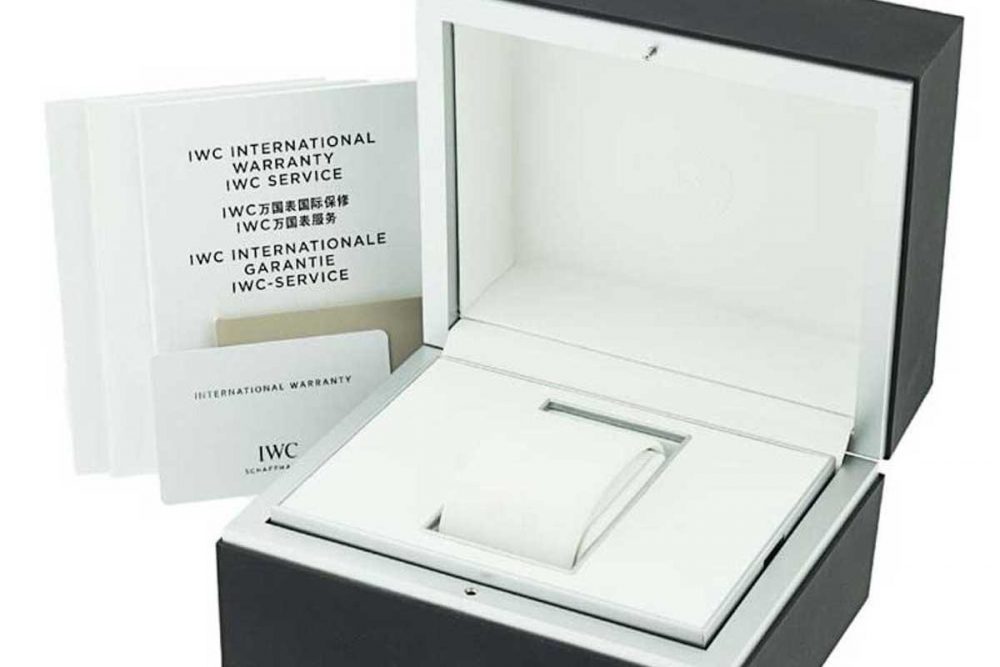 From purposeful beginnings in 1936, IWC's Pilot's Watches have grown to be the most recognised and respected examples of the type. The combination of utility and stylistic versatility make them perennial favourites.