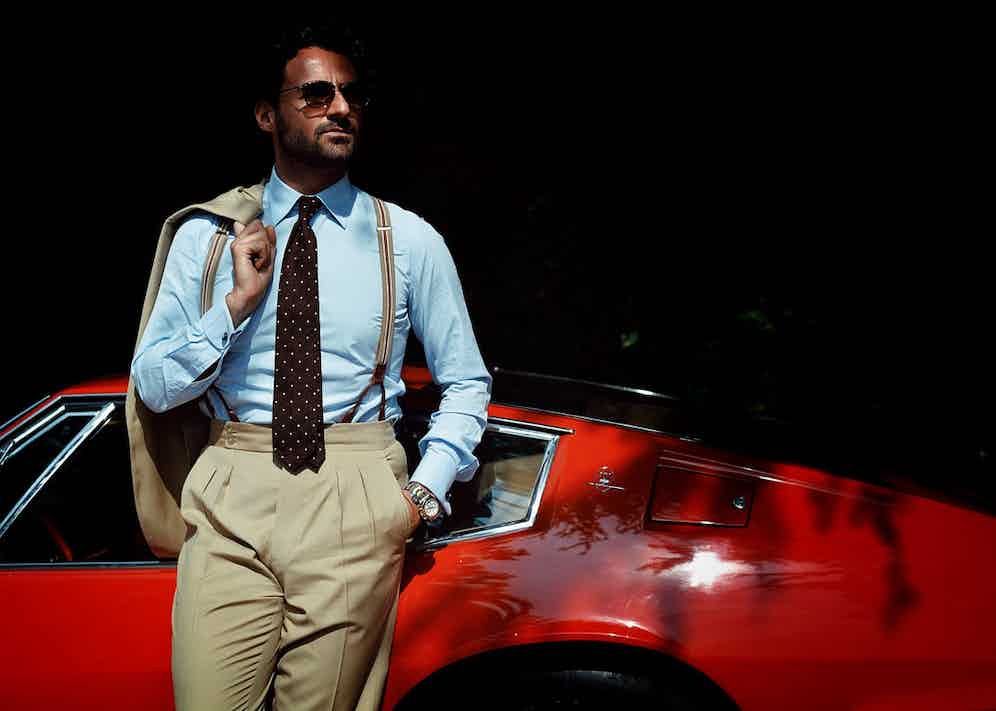 It is said that, upon learning about the outbreak of war in 1939, the first thing acclaimed 20th century actor Sir Ralph Richardson did was race to his Savile Row tailor and snap up half a dozen pairs of Albert Thurston braces, lest they come to be in short supply due to rationing.

He was certainly onto something. The iconic British accessories label has been beloved by legions of sartorial menswear devotees since Thurston opened his eponymous emporium in London’s Haymarket in 1820.Although versions of suspenders and braces have been worn for centuries, Thurstonwas the first to sell the modern iterations that we are familiar with today, designed to be attached by leather loops to support the high-waisted trousers in fashion at the time.

Amongst its clientele have been kings, princes, presidents, businessmen and Hollywood actors, all won over by the impeccable quality and timeless style the esteemed labelis so renowned for.Its braces have become cemented as astapleof the screen - sported by the likes of Daniel Craig in Casino Royale, Skyfall and No Time to Die; Leonardo DiCaprio in The Great Gatsby; Christian Bale in American Psycho and - perhaps most famously - Michael Douglas in the cult classic Wall Street, which enshrined themas a staple of power dressing and a status symbol in the corporate world.

Today, the styles of braces and suspenders sold by Albert Thurston maintain the label’s original timeless elegance and make for the ultimate addition to one’s accessories collection. Whilst the inundation of the market with more functional solutions like simple leather belts and form-fitting clothing have made the wearing of braces for practicality’s sake largely redundant, Thurston’s appeal endures, thanks to its storied and iconic history and its unfailing dedication to high quality craftsmanship. Each pair of braces is handcrafted in England according to traditional artisanal techniques, usingluxurious hardware and sturdy materials to guarantee countless wears.

Whilst it is now widely accepted to sport one’s braces with casual ensembles - some even daring to make a statement by wearing theirs with jeans and sneakers - it is the elegance of a bygone era that we most endeavour to channel. The traditional pairing of braces with formalwear or a suit and tie evokes a simple, timeless sophistication, of which we imagine Albert himself would be proud. Ultimately, the purchase of a pair of Albert Thurston braces is a celebration of a legacy that will continue to endure. Invest in a slice of history.