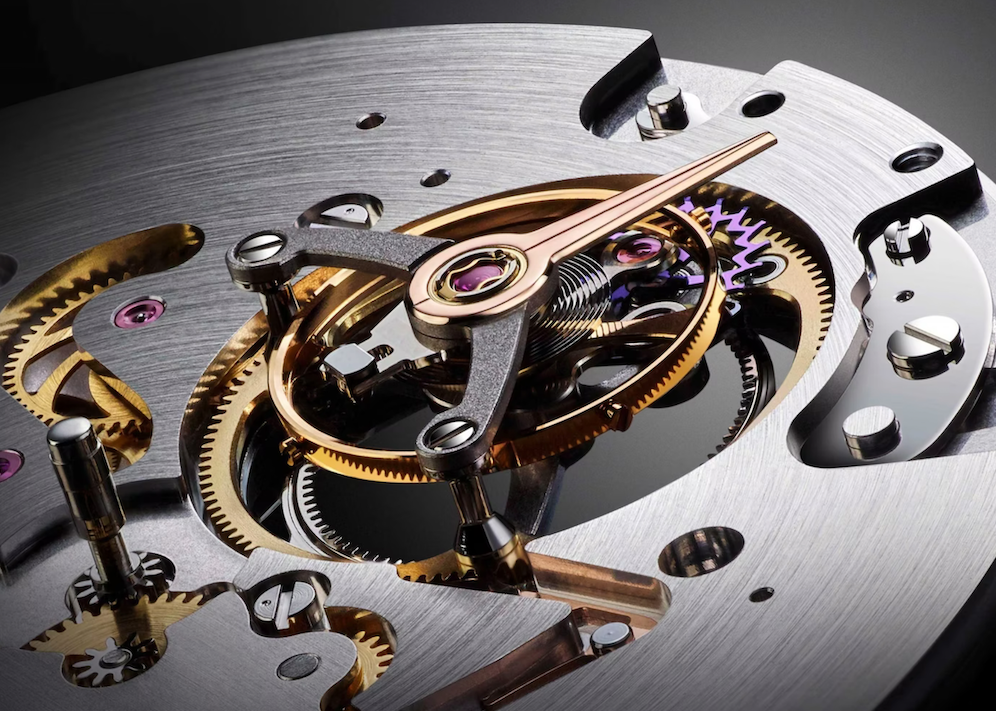 The sense of pride that Carl F. Bucherer expresses in its capacity as a leading manufacture is as much a part of its present-day identity as it is a part of its origin story. Founder Carl Friedrich Bucherer opened the doors to his first watch and jewellery boutique at Schwanenplatz in Lucerne, Switzerland in 1888. It didn’t take long from that point for him to recognize the untapped potential in the realm of wristwatches. In this regard, aside from simply shifting his focus towards retailing some of Swiss watchmaking’s respected brands, he was quick to invest in the production of his own watches that would bear his own name.

That’s not to say that he went out and bought a watchmaking brand, or simply acquired the necessary tools and hired artisans to help realise his vision. Serendipity would have it that, inspired by the passion he had for the work he did, Carl Friedrich’s sons, Ernst and Carl Eduard Bucherer were moved to become a watchmaker and a goldsmith, respectively. And it was his sons who, in 1919, helped realise his watchmaking vision with the first wristwatch to bear the family name. Thus, the mandate was established that the company must be responsible for and manufacture its own watches in a way that there is no compromise in the accuracy with which its watchmaking aspiration is realised. 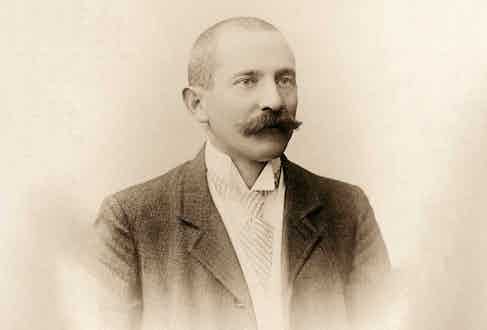 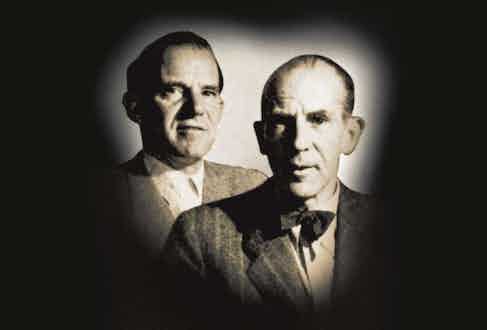 Contemporary Carl F. Bucherer’s manufacturing headquarters is located in Lengnau — a brisk drive from its home city of Lucerne. This facility is relativity new, having opened in 2016, with the goal of housing a majority of the company’s production under a single roof and progressively increasing its capabilities. The manufacture building is equipped to perform as a state-of-the-art facility. And while a part of the production is automated in terms of parts fabrication and the setting of jewels, much more has to done by skilled hands, not only as a means of preserving traditions and the soul of watchmaking but because it really is the best way to do so. This applies to certain aspects of watch assembly, movement decoration, quality control and more.

Carl F. Bucherer’s Chief Technology Officer, Samir Merdanovic, says, “You could describe our manufacturer as the heart of our brand. This is where specialists who have mastered the skills of their profession work their magic; concepts are defined, sketches are drawn and 3D models are the ultimate proof of concept, which confirm that we are on the right track, blending age old watchmaking skills and cutting-edge technology. We produce and assemble most of the parts in the watch movement, place it in the case and test the watch extensively to ensure it meets our exacting standards.” 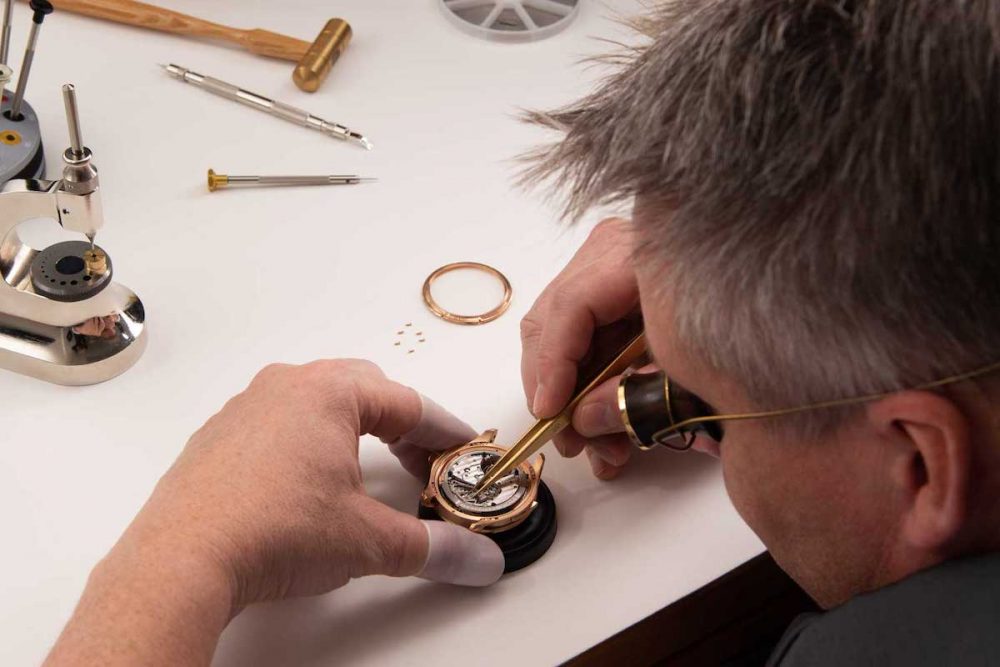 While Carl F. Bucherer’s manufacturing stands shoulder to shoulder with some of the best names in Swiss watchmaking, where it finds itself peerless is in its association with the city of its birth. Carl F. Bucherer is the only prominent watchmaking entity that lays claim to Lucerne as its home turf. The places people call home often greatly influence the way they create and operate. This is no different for Carl F. Bucherer. The company has completely embraced the history and riches of its home city, to inspire and drive its technical and aesthetic ambitions to the extent that the words “Made of Lucerne” form one of the company’s primary guiding principles. But just so that this doesn’t make the company appear completely inward looking, the next important principle the company abides by is defined by the words “Carl F. Bucherer — Rooted in the heart of Switzerland but at home everywhere in the world.”

There is yet another step that the company has taken to make sure that the world is able to understand and appreciate Carl F. Bucherer’s unique stance in watchmaking. It has managed this by subdividing its watchmaking into four distinct pillars. Explains Sascha Moeri, the CEO of Carl F. Bucherer, “We wanted to offer our customers a more accessible journey through our brand. These brand worlds allow us to review our 133-plus year history but also to look ahead. They are an ideal thread connecting all the things Carl F. Bucherer had done in the past and those we are aiming to do in the future. They have proven to be ideal ways to communicate with our audiences effectively and entertainingly.”

We start with Maison & Heritage, which reflects the company’s dedication to contemporary craftsmanship and the art of traditional watchmaking that has defined Carl F. Bucherer since its early days. The word Maison indicates that the timepiece is equipped with one of the brand’s in-house movements with the peripheral technology unique to the company. Thereafter, the word Heritage distinguishes the watches that are created to tangibly reflect and honour the history of Carl F. Bucherer and its over 130 years of watchmaking. In summary, the Maison & Heritage timepieces embody the brand’s “Made of Lucerne” mantra: each of these is an expression of the brand’s values and a loving tribute to its hometown. Maison & Heritage primarily accounts for the company’s Heritage collection of watches. 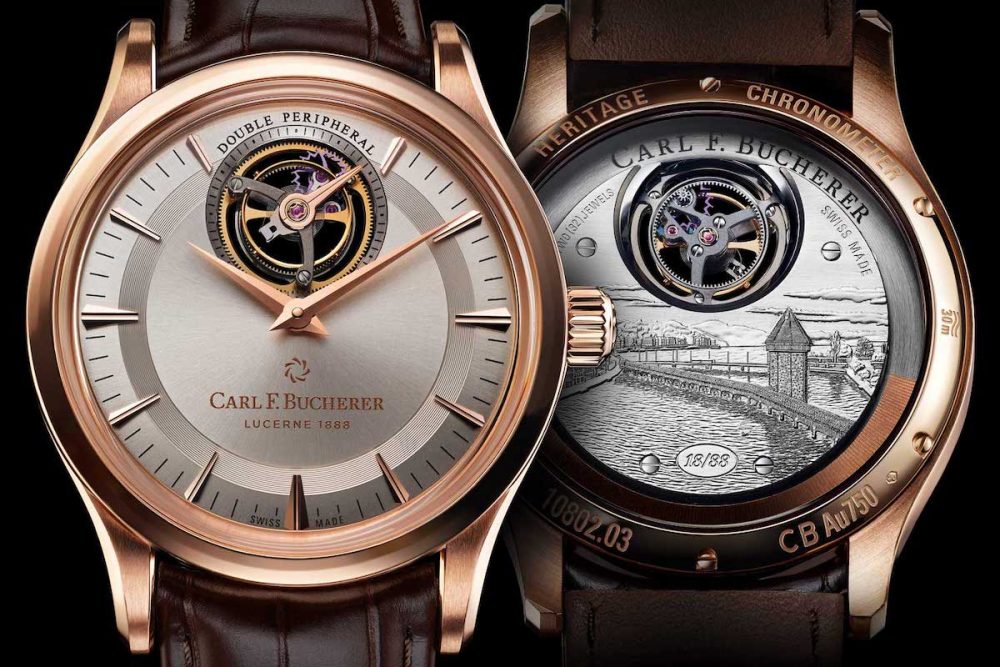 The 2018, Heritage Tourbillon Double Peripheral – Limited Edition equipped with the CFB T3000 movement is a perfect example of a timepiece that resides under the Maison & Heritage Brand World

Next, we have Entertainment & Style, where the company has made it a point to place Carl F. Bucherer’s watchmaking within the glitz and glamour of some of the world’s most renowned films. Some celebrated silver screen appearances of Carl F. Bucherer watches include acclaimed movies such as Atomic Blonde and on Keanu Reeves’ wrist in the John Wick series. Interestingly, in this franchise, massive LED billboards often line the streets through which the protagonist’s story plays out and in a playful twist, the film audience can see Carl F. Bucherer watch advertisements playing on these giant screens in the background.

This was a superbly forward-thinking way to embed the company in the John Wick universe, on top of simply appearing on his wrist. And it’s not just Hollywood and leading male characters that Carl F. Bucherer works with. The brilliant Chinese actress and singer and longstanding global Carl F. Bucherer Ambassador Li Bingbing wears her Pathos proudly. Shares Mr Moeri, “We are absolutely delighted to be working with Li Bingbing. She is an enormously talented actress but she is so much more. She’s a fascinating and strong personality, with a passion for the planet, who embodies the Entertainment & Style brand world and perfectly represents our values.” The Adamavi and Pathos collections highlight the Entertainment & Style brand world. 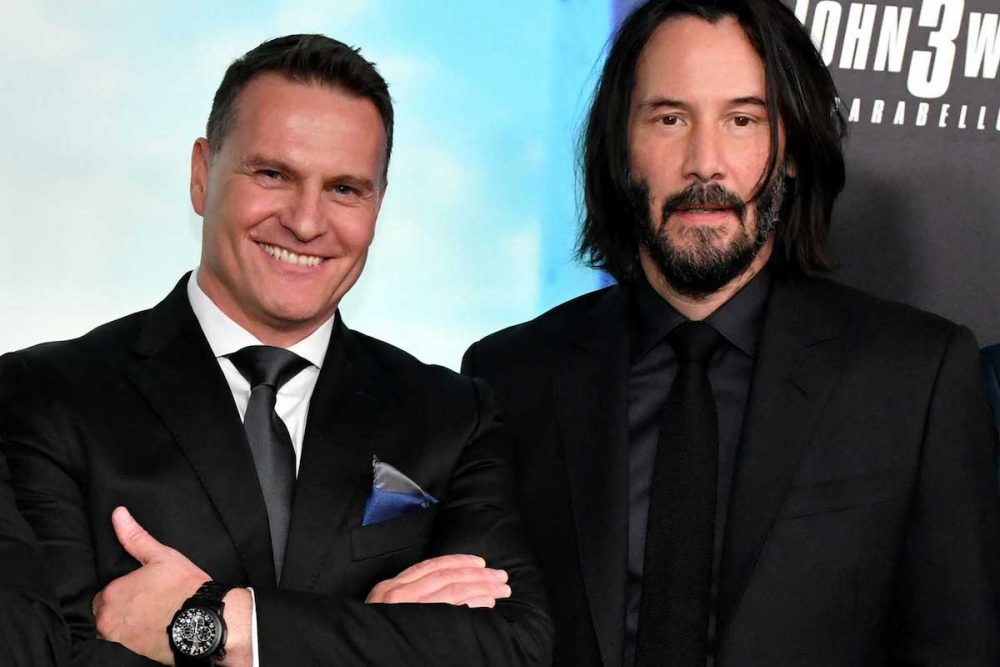 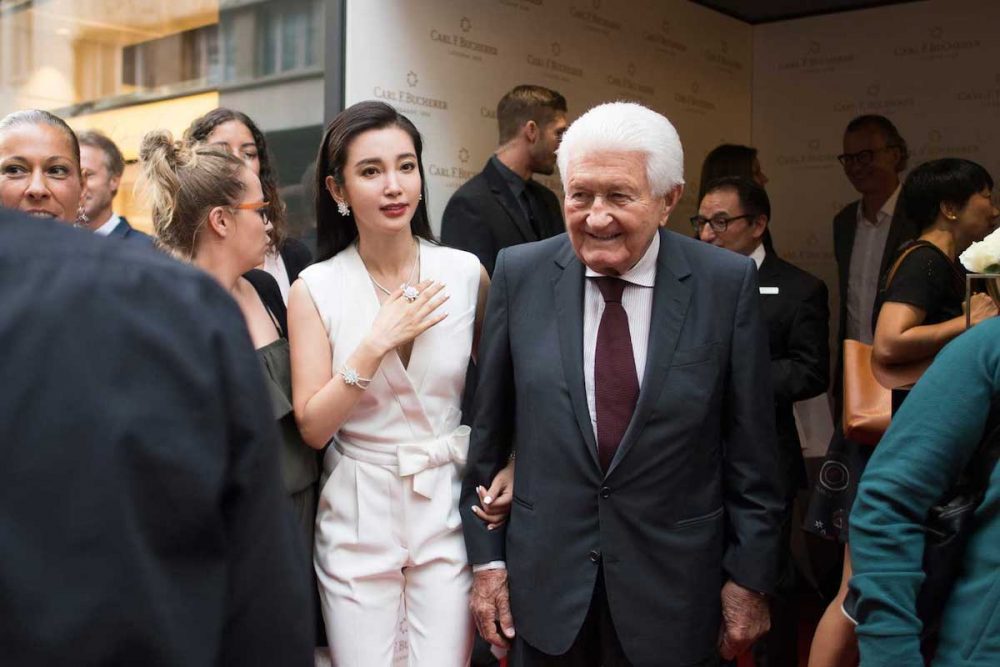 Thirdly, we have Travel & Exploration. As explained by Mr Moeri, “There’s no question that travel and exploration are part of the core DNA of our brand. Nearly a hundred years ago, members of our founding family started looking for ways to take their Swiss watchmaking values to distant lands across the sea. It seems almost inevitable that a century later, we still make some of the finest travel watches in the world.” Timepieces such as the Patravi TravelTec and the Manero Flyback define the Travel & Exploration brand world, reflecting the founding family’s spirt of travel and its desire to bring the company’s watchmaking to the world. 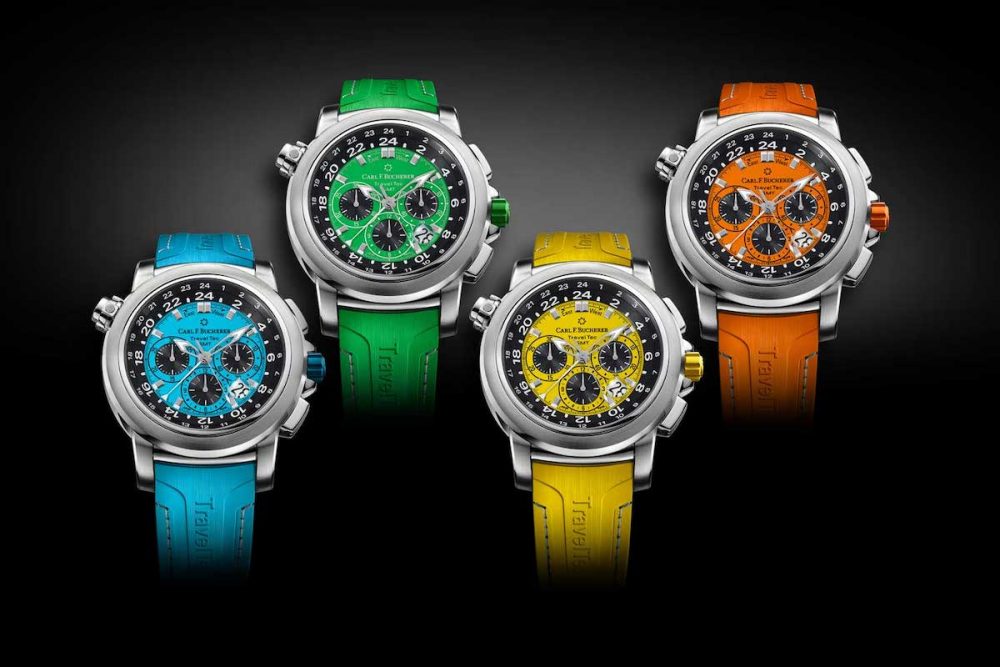 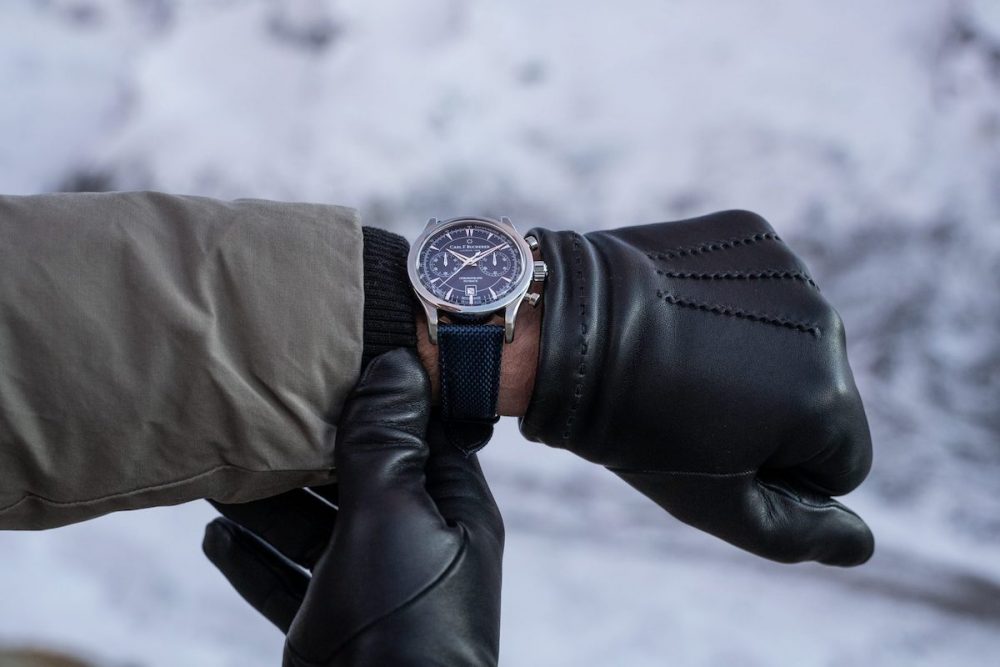 The Manero Flyback Blue in its elemental spirit of traveling (Carl F. Bucherer)

The last brand world on the list is Sport & Adventure. Here Carl F. Bucherer has created the means to associate itself and its watchmaking with the exciting world of sports and friendships with several top athletes across disciplines. It has also created a doorway for one of the company’s longest-standing and most meaningful associations, the Manta Trust. Through this effort, the company has committed itself to making long-term contributions to the conservation of the manta ray and the ecosystem that sustains these rare creatures. Says Mr Moeri, “This brand world has two separate but perfectly complementary components. On the sporting side, we have some great partnerships with some very talented men and women; on the adventure side, our partnership with the Manta Trust allows us to play an active role in something much bigger than we are. We’re particularly proud to have helped make the Floating Research Station in the Maldives possible.” 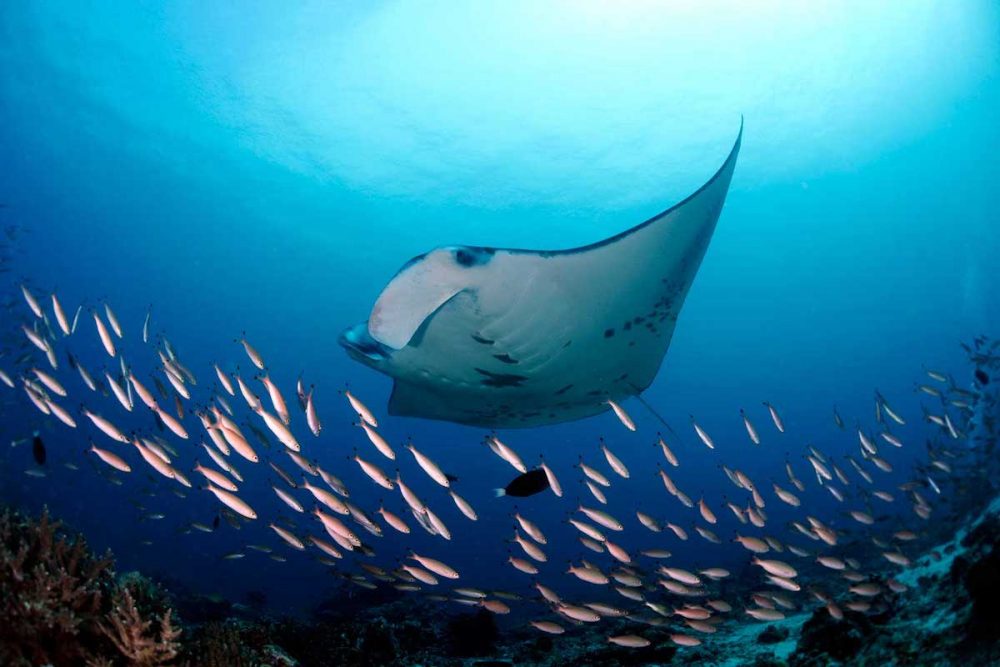 Carl F. Bucherer is a partner of the Manta Trust, a UK-based charity with the mission of conserving the oceans and the habitat of the rare manta rays. Manta Trust is active in over 20 countries, tirelessly leading research projects and awareness campaigns on behalf of this endangered species. 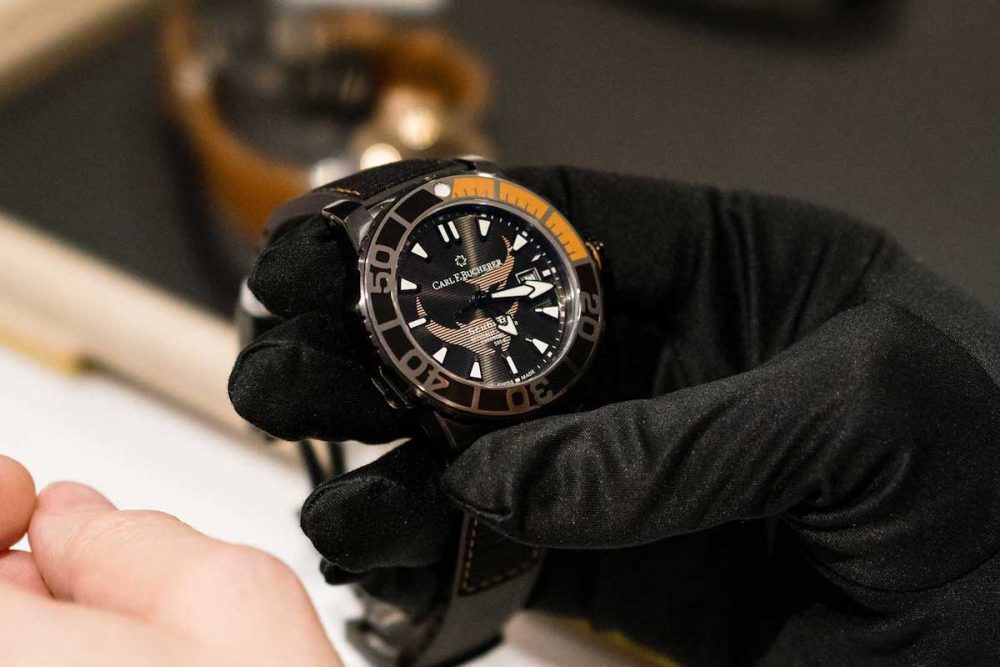 The breadth and depth of Carl F. Bucherer’s watchmaking heritage, paired with the intentional exploration of universes far removed from that of horology, have empowered the company to constantly seek new innovations beyond its earlier glories.

In 2008, with a clear understanding of the reality that people no longer wore their wristwatches for utility but rather out of a pure emotional desire, Carl F. Bucherer developed and manufactured the CFB A1000 movement, featuring the world’s first serially-produced peripheral rotor whose oscillating weight orbits the movement. This patented peripheral rotor combined the convenience of an automatic movement with an unencumbered view of that movement through a transparent sapphire caseback, which enhances any watch lover’s enjoyment.

The idea behind the CFB A1000 was fine-tuned with the launch of the COSC-certified CFB A2000. Mr Merdanovic says, “You may know that Carl F. Bucherer is admired around the world for its peripheral technology. In short, with this technology, parts are not fixed to the movement’s plates or bridges, but instead, rotate on a periphery type ball bearing. It allows for thinner watches and an unobstructed view of the movement.”

Since then, the movement’s lineage has given us the exemplary heights of watchmaking such as the Heritage Tourbillon Double Peripheral – Limited Edition in 2018, powered by the in-house developed and manufactured CFB T3000 calibre, which boasts Carl F. Bucherer’s peripheral rotor knowhow and is regulated by a stop seconds tourbillon movement with a carriage driven at its periphery. The movement’s accuracy and performance are confirmed by its status as a COSC-certified chronometer. 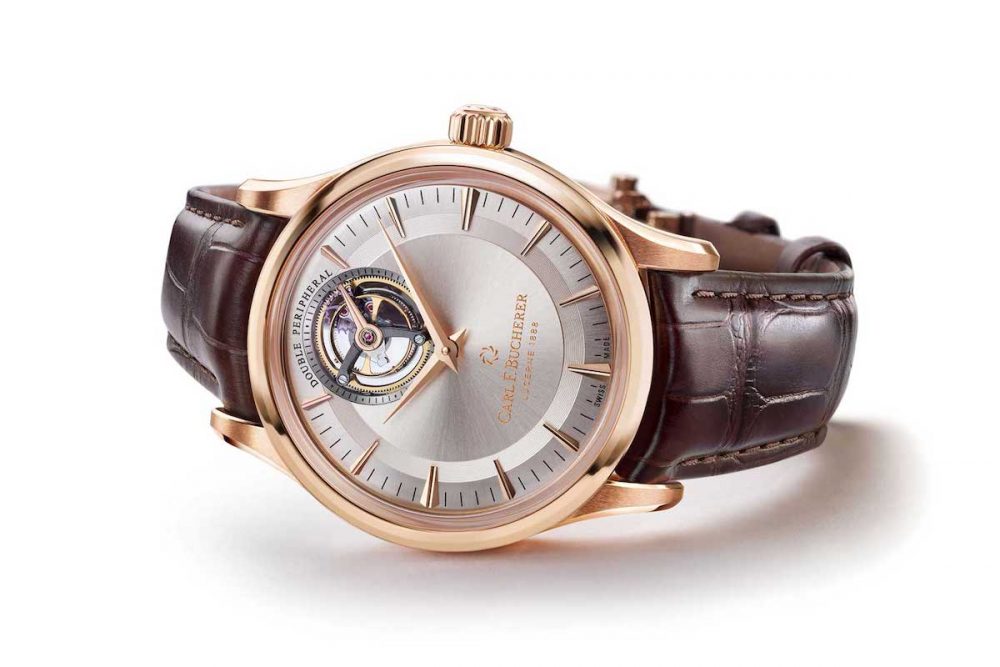 In 2018, the brand surpassed the peripheral technology with the introduction of the Heritage Tourbillon Double Peripheral – Limited Edition 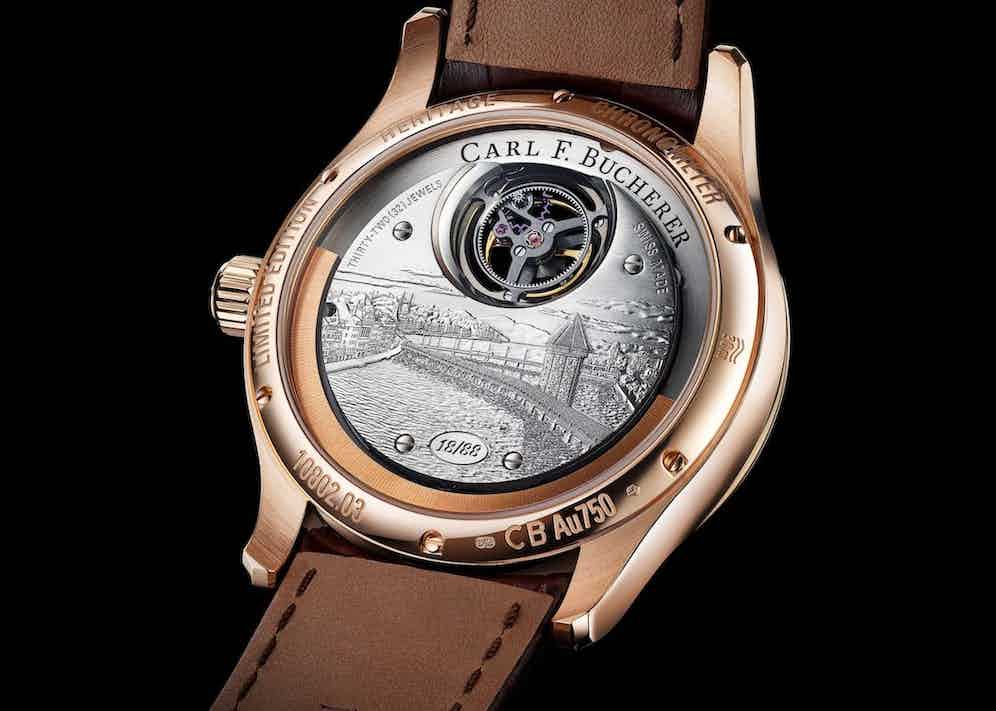 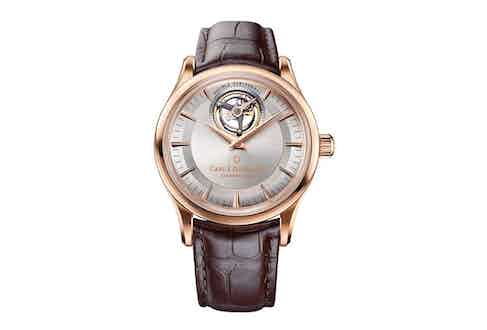 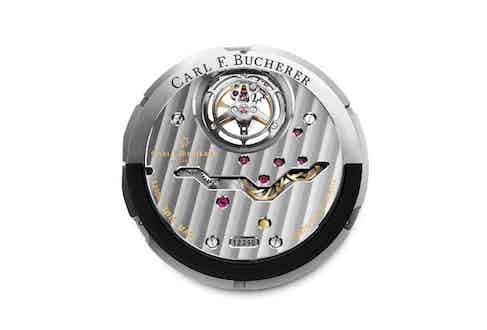 However, in 2021, the company pulled out all the stops and announced the Manero Minute Repeater Symphony at Watches & Wonders, Geneva. It is the ultimate expression of the Manufacture’s mastery of watchmaking because it boasts not only Carl F. Bucherer’s peripheral winding system and floating peripheral tourbillon but also incorporates a third peripheral mechanism: its chiming minute repeater complication. Here the repeater’s regulator is mounted peripherally — a first in the world of watchmaking, for which Carl F. Bucherer has applied for a patent. And in keeping to its high standards for precision, the Manufacture calibre CFB MR3000 is, of course, a COSC-certified chronometer.

It is worth noting that customers who acquire this ultimate expression of luxury watchmaking will have a number of individualization options. These include the colour of the gold or the choice of other precious metals used to craft the case and certain components, the possibility to select different jewels and, significantly, to have a unique engraving that will distinguish this timepiece from every other watch in the world. In summation, Mr Moeri says, “Clearly, our accomplishments in peripheral technology have become our flagship. When we secured our patent on the peripheral winding system back in 2008, it sparked the passion that ultimately led to the creation of this new masterpiece. We are proud of what we’ve achieved and excited about sharing it with the world.” 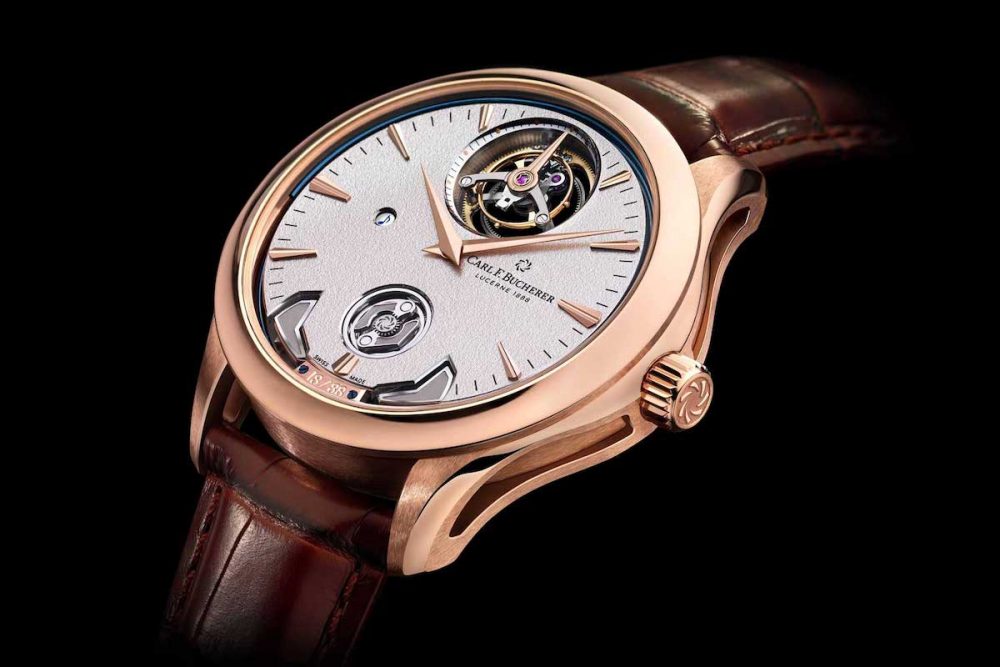 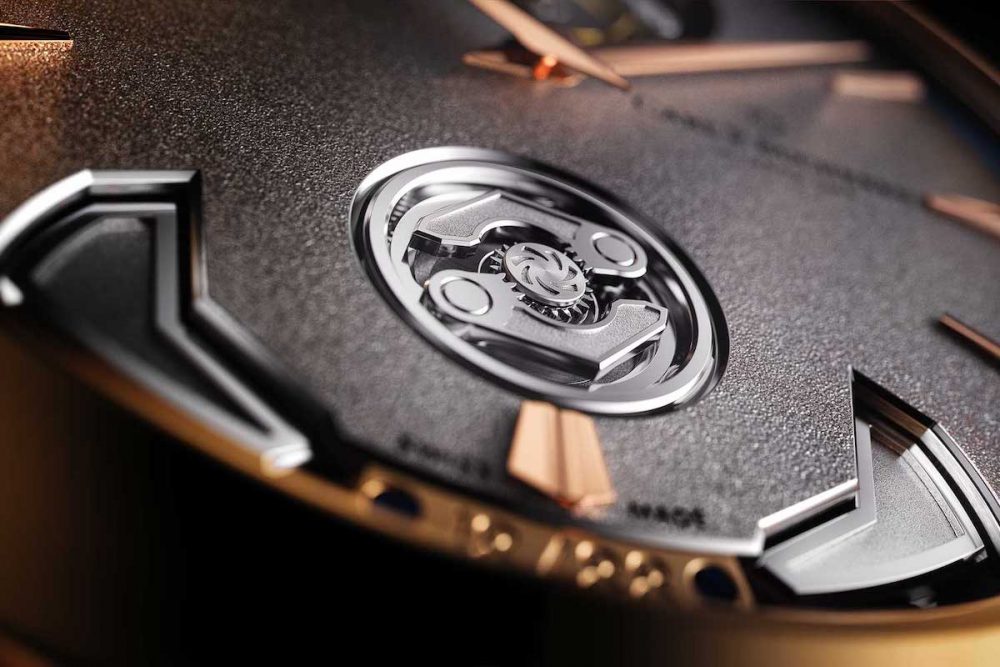 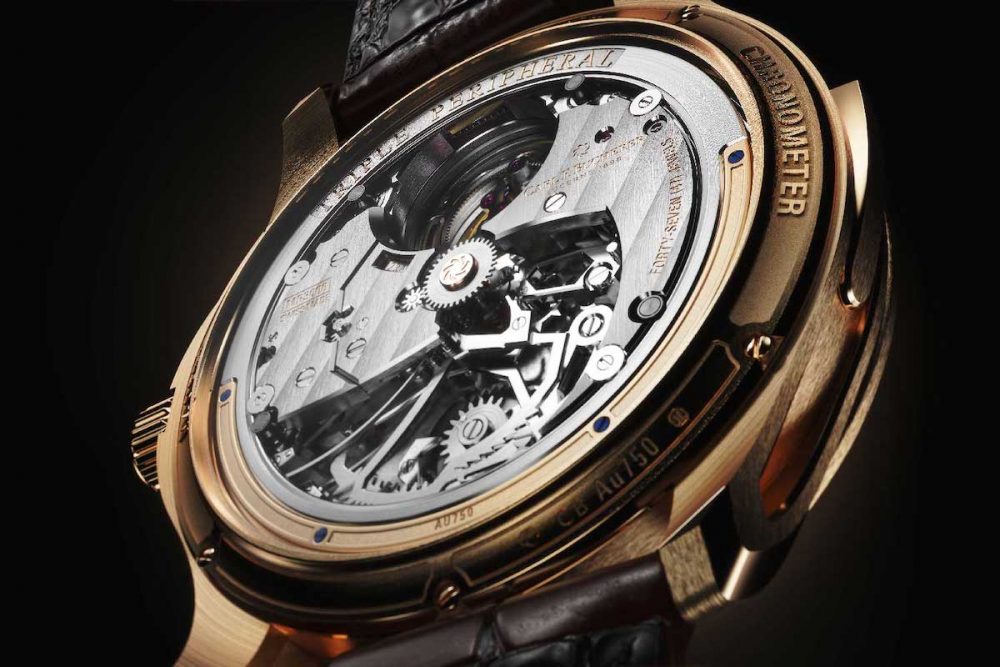 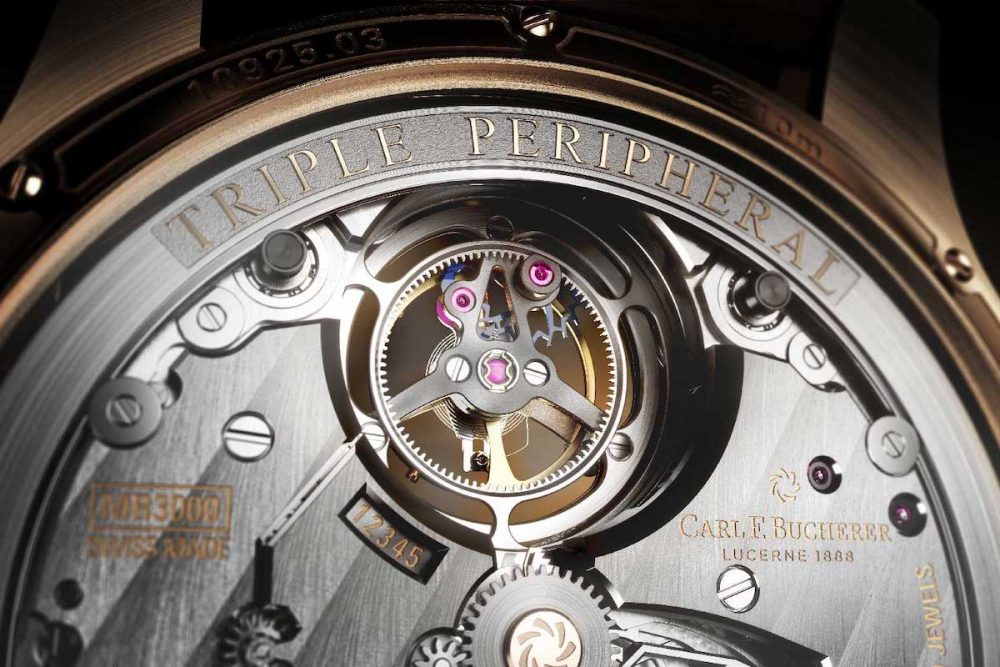