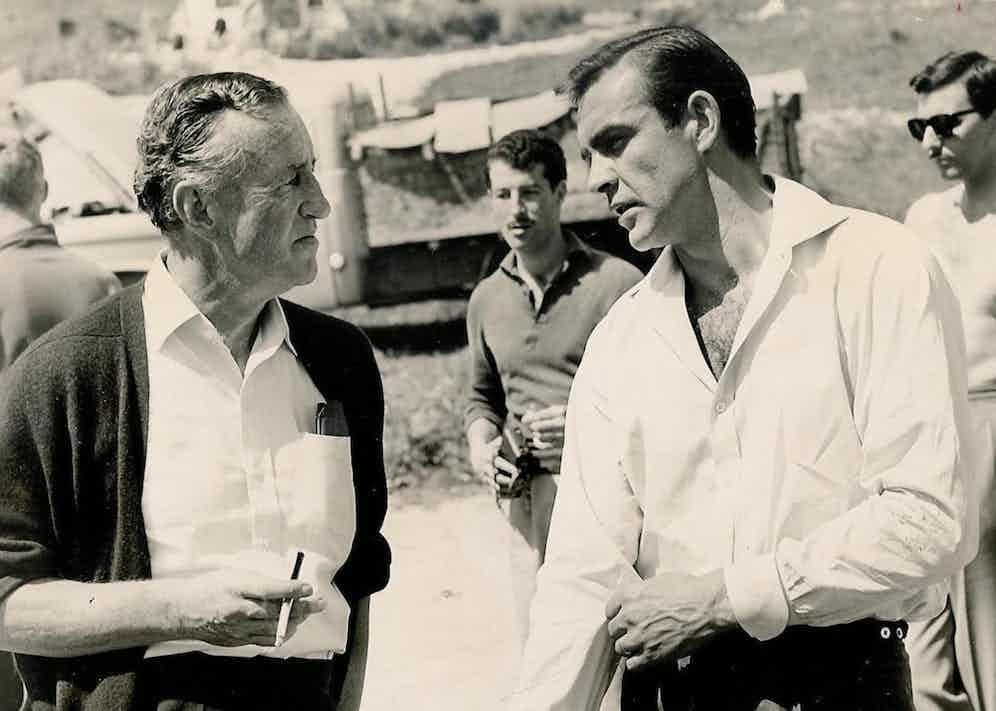 Ian Fleming and Sean Connery chat on the set of From Russia With Love, 1963.

As he tied his thin, double-ended, black satin tie, he paused for a moment and examined himself levelly in the mirror. His grey-blue eyes looked calmly back with a hint of ironical inquiry and the short lock of black hair which would never stay in place slowly subsided to form a thick comma above his right eyebrow. With the thin vertical scar down his right cheek the general effect was faintly piratical. Not much of Hoagy Carmichael there, thought Bond, as he filled a flat, light gunmetal box with fifty of the Morland cigarettes with the triple gold band. Mathis had told him of the girl’s comment… He looked carefully round the room to see if anything had been forgotten and slipped his single-breasted dinner-jacket coat over his heavy silk evening shirt. He felt cool and comfortable. He verified in the mirror that there was absolutely no sign of the flat gun under his left arm, gave a final pull at his narrow tie and walked out of the door and locked it.

Ian Fleming’s James Bond is often thought of as a ‘British hero’. Indeed, Bond’s ‘Britishness’ has a lot to do with his appeal. He’s smartly-dressed in a way typically associated with moneyed England, favouring ‘single-breasted suits in dark blue light-weight worsted’ wool, often pairing them with a ’white sea-island cotton shirt’, and ‘black silk knitted tie’ in the novels. Throughout his fictional life he drives a fleet of British automobiles, ranging from a Bentley 4 1/2 Litre in theCasino Royalebook to a specially created Aston Martin DB10 on screen inSpectre. He’s a man of tradition, lives in a Chelsea square and is incredibly charming, like a typical British gentleman should be.

Bond is a super-hero. He is unstoppable. He can’t be killed, and even when he’s on the brink of demise he smirks it off as though his old friend is jibing at him, using the same tired joke he has for years. Bond is a fighter. In hand-to-hand combat he’s unstoppable, and with a gun he never misses. He is an expert at everything; he can drive a tank, select a fine wine to pair with his fish, and speak multiple languages, he can blend into any environment, will talk his way out of anything, has a wardrobe to make you jealous, appreciates a good watch, saves the world on demand, has slept with more women than you can imagine. He is the alpha-male, but without the bravado and showy cockiness. Bond is charming, Bond is British.

But he’s notthatcharming. He’s a known womaniser, has expressed plenty of questionable views in Fleming’s novels, and causes destruction on his missions around the world; he’s the great saviour, jetting off to far-flung locales, integrating into a society that he doesn’t really know, and stopping the bad guy, often with little regard for the civilians MI6 is trying to protect. Bond’s very foundations are built on his flaws, but he’s loved anyway.

Great Britain is a geographically small island, yet it’s produced its fair share of heroes over the decades. According to the Oxford Dictionary – a British hero in itself – ‘hero’ can be defined as: ‘a person who is admired for their courage, outstanding achievements, or noble qualities’. Names that immediately spring to mind include: John Lennon, Alan Turing, David Bowie, Emily Davison, David Attenborough, Princess Diana and of course, Ian Fleming. There are those who fought valiantly in the military to protect Queen and country, such as Sir Adrian Paul Guislain Carton de Wiart, whom may possess the greatest Wikipedia entry of all time: ‘He served in the Boer War, First World War, and Second World War; was shot in the face, head, stomach, ankle, leg, hip, and ear; survived two plane crashes; tunnelled out of a prisoner-of-war camp; and tore off his own fingers when a doctor refused to amputate them. Describing his experiences in the First World War, he wrote, "Frankly I had enjoyed the war”.’ It is this admirable stoicism and dry wit that has become associated with Britain andThe Rakewill be celebrating such figures over the course of the next month. There will also be features on the finest British automobiles including Aston Martin and McLaren; the most innovative British tailors from Edward Sexton to Thom Sweeney; the best London restaurants including the recently renovated Simpsons on the Strand; and some of the most iconic female models to hail from Blighty. Bond would be proud. 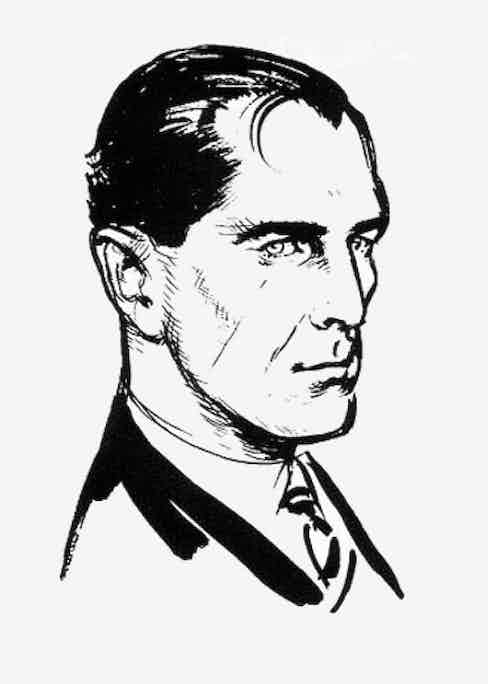 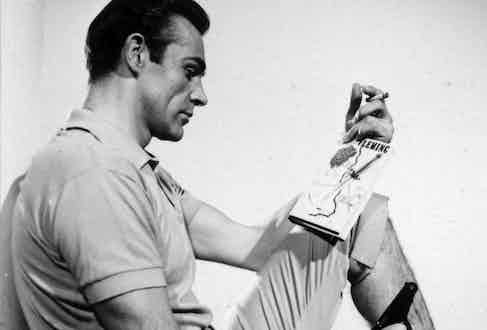 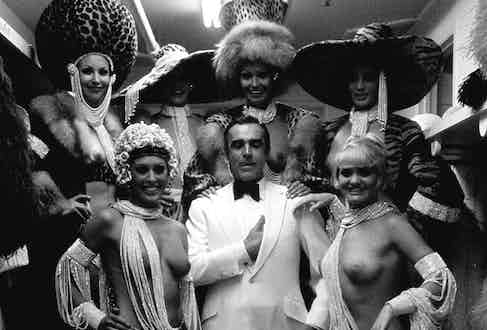 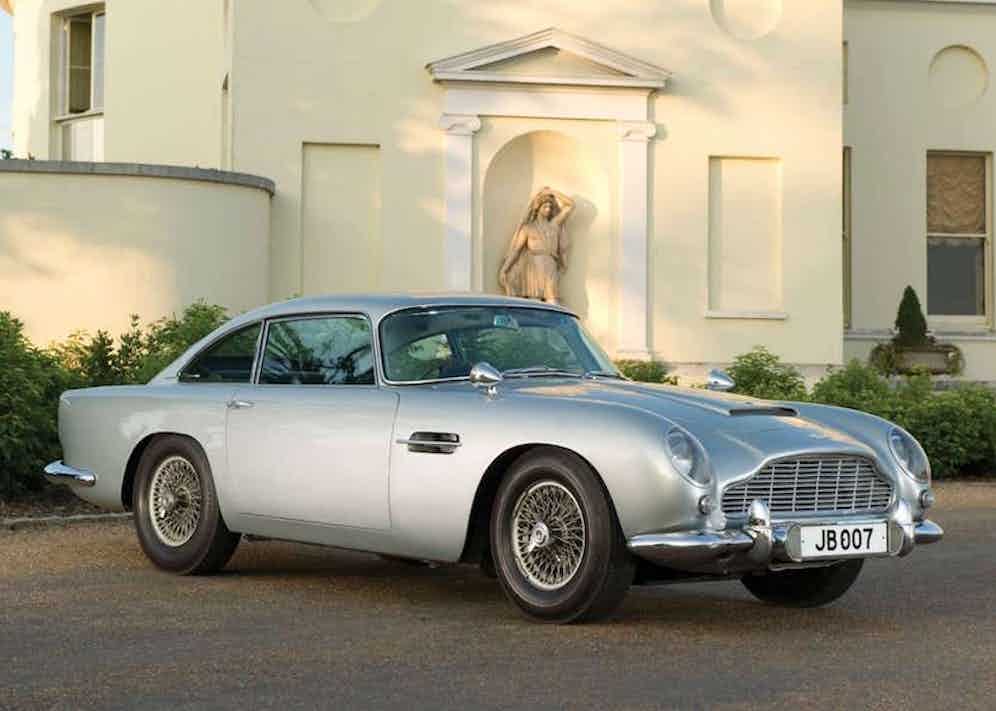