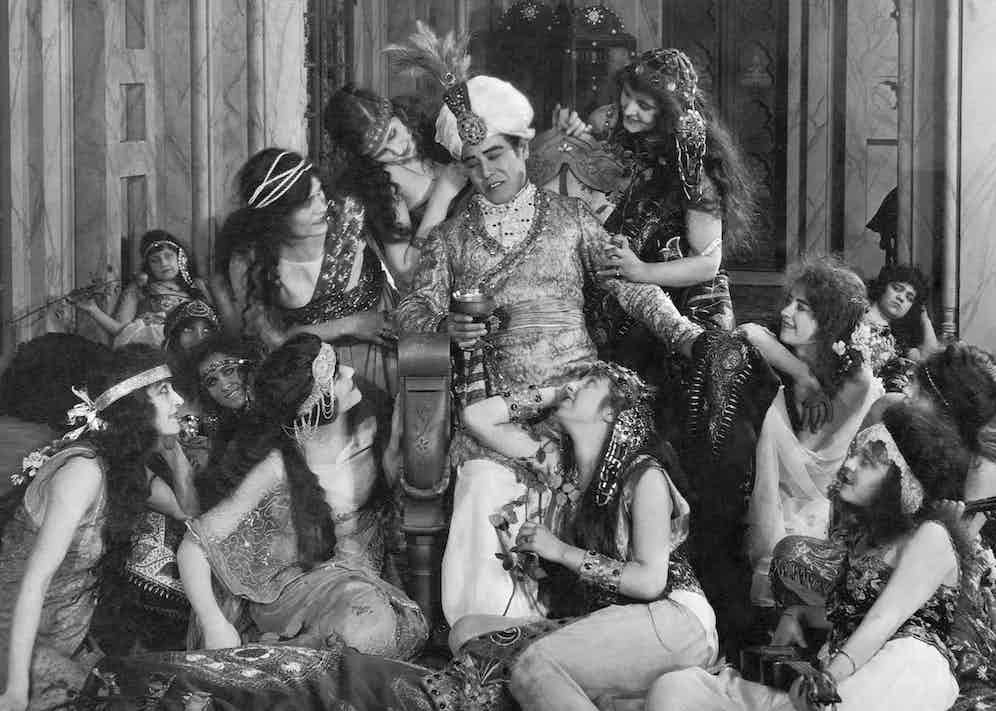 Sessue Hayakawa, surrounded by Group of Beautiful Women, on-set of the Silent Film, 'The Bottle Imp', 1917.

There’s an episode of Black Mirror – a UK TV series which predicts, with tongue firmly in its cheek, the grim realities to which contemporary trends could theoretically lead us – that takes on the subject of celebrity culture. Named Fifteen Million Merits, it posits a world in which all life is experienced via screens, and – so vociferous has the public appetite for celebrity become - the only way ordinary people can escape day-to-day toil is by winning an X-Factor style TV talent show. The show’s writer, Charlie Brooker, is a master of mischievous extrapolation. And yet, just six years after the show aired, it seems as if society has taken several steps towards this Huxley-esque dystopia.

The concept of fame is nothing new. Some academics consider Milo of Kroton, a five-time Olympic wrestling champion alive half a millennium before a Nazarene became the ultimate global superstar he remains today, to be the first ever celebrity. And, humans have always enjoyed gossiping (my favourite bit of trivia is the origin of the word “trivia” - “Trivium”, a three-road junction just outside Ancient Rome, where common folk would pass by and have trifling conversations about ongoings within the city walls).

Of course, I’m not making any fresh complaint here. I’ve heard some wistful pub pundit say something on the lines of, “Remember when people became famous for having talent?” more times than I’ve heard a Beatles classic being murdered by some teenaged, histrionic warbler. But what I am calling for, here, is affirmative, aggressive action.

It was in the early 2000s, some four decades after the word 'paparazzi' was derived from La Dolce Vita's photographer character Paparazzo, that media execs clocked onto the gluttonous psychological need people have to live outside their own lives. Gossip magazines and reality TV shows duly thrived symbiotically. For a while after this, fame remained a bi-product of functional roles – David Beckham was, for a while, primarily a footballer; Brad Pitt remained first and foremost an actor; Katie Price… well, OK, but you get my drift.

"But the modern cult of celebrity is no longer a cult: it’s a global religious junta. And it needs to be suppressed."

But things escalated. Magazine publishers and TV crews began training their cameras on anyone young, pretty and credulous enough to want to be on the cult’s pulpit rather than in its congregation. Such a behemoth did this international commercial machine gradually become, the tail began wagging the dog: the celebrity-ness became the selling point, and overtook any kind of valid raison d’etre outside circulation and viewing figures. Perhaps we’ve already seen the ultimate conclusion of this, with a reality TV star becoming the most powerful person on the planet (OK, the respite he offered voters from the tiresome dirge that is political complexity helped his cause, but fame from The Apprentice was surely a fierce wind in his campaign’s sails).

Usually the celebrity bug’s favoured hosts are youth and vacuity, which means that it’s transmitting narcissism and nihilism to those we need to be tomorrow’s functioning adults. It’s generating self-destructing dreams (at the last count, over half of 18- to 25-year-olds think they will be famous one day), and generating ambition of only the grizzliest kind (gunmen who want to surpass Columbine in infamy and body count, for example). “Fame, fame, fatal fame,” sang The Smiths in 1986; “it can play hideous tricks on the brain”, and Morrissey could never have known how prescient his lyrics were. It’s also been tied up, now, with shame culture, as that dentist that shot Cecil the lion – the ultimate Warhol-esque quarter-hour wonder – discovered.

Guile and substance are becoming increasingly unfashionable. Statesmen who should be doing their jobs are spending precious hours being briefed on pop culture (if just one politician, during an election campaign, would admit: “I’m afraid I’m too posh for Beyoncé – I’m more of a Brahams man myself”, you wouldn’t be able to get me to the polling booth fast enough). Perhaps worst of all, for the more zealous consumers of The Rake, it’s starting to see young pop pipsqueaks who haven’t yet discovered the difference between a notch and a peak lapel make it onto Best Dressed lists. No wonder achievers of precisely bugger-all are getting invited to Downing Street, when the most popular news outlets of the day, the tabloids – those masters of unwitting bathos - juxtapose front line war reports and rallying cries to racial hatred with the latest on some bubblegum pop starlet’s sex texts.

It’s sucking all that’s edifying from our cultural landscape, and filling the vacuum with antimatter. So here’s what I’m suggesting: all unscripted and semi-scripted television shows are to be shown on a single channel, for which subscribers pay a premium (the term “idiot tax” could be coined here). The resulting revenue will underwrite cultural programmes and competently, tastefully produced publications celebrating the achievements of people who make the artistic and intellectual landscapes more verdant. And finally, every copy of OK!, Heat, People, Us Weekly and Entertainment Weekly ever produced will be pulped, and the resulting sludge used to bury Simon Cowell’s West London mansion.