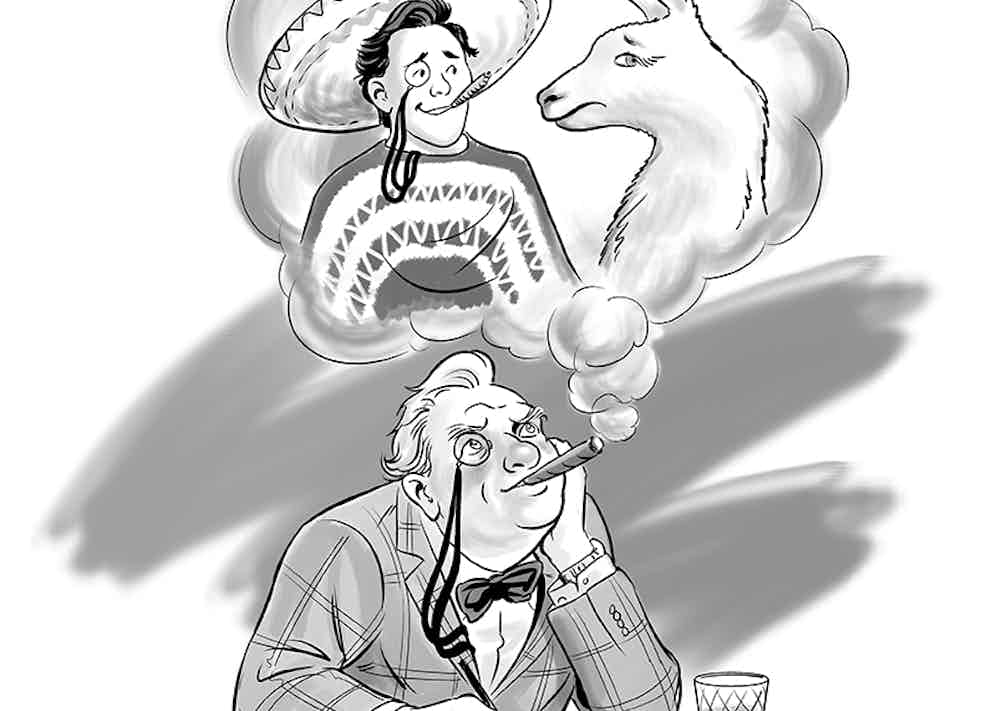 As anyone who doesn't live in an oilskin tent in the Arctic tundra will be aware that, in September earlier this year, the British Prime Minister, David Cameron, was the subject of an embarrassing allegation about his participation in a bizarre dinner-club initiation ritual during his university days. The notion that the man who would go on to become the 12th prime minister of Queen Elizabeth's reign may have placed his appendage inside a severed pig's head didn't quite, however, cause a national outpouring of rage.

The reaction was more of a collective howl of incredulous amusement. But, amid all the 'snoutrageous' barrage of tabloid frippery and social media innuendo, there were some quarters - notably the online message boards of mid-market national newspapers, where the most petty-minded of middle England get to air their mendacious bile anonymously and with impunity - in which armchair commentators were calling for Cameron's head on a platter. And not just to give him a taste of his own medicine.

It is truly astonishing, the vacuity with which a large number of people all over the developed world assess their leaders' decency and ethical fortitude. Priggish squeamishness and Pecksniffian whimsy seems to have filled a gap left by an utter lack of genuine moral perspective. We'll let our leaders get away with lies, backstabs and U-turns with relatively little complaint; we'll allow them to equip despots with sophisticated weaponry until the annihilation of mankind is heralded not by the majestic clang of a heavenly gong but by a faint arterial throb from the charred remains of the last human alive. But when it comes to a victimless act of silliness in decades long past, on come the angry mob, all fired up with righteous, retroactive fury.

If a leader did commit such an act in pursuit of gratification, it would raise questions about their sanity to govern - but the context of the anecdote is such that participants were performing a highly unpalatable dare. More importantly, though, no one is suggesting that this sort of thing is happening between debates at the Palace of Westminster today. We're talking about shenanigans in the past. At the time, the members of that club were youthful enough for their substantia nigras to be churning out dopamine - the neurotransmitter that pushes the human drive for reward via thrills, exhilaration or sheer novelty - at the same rate the waiters were pouring vintage Burgundy.

Young people are hardwired to do silly-arsed stuff, an evolutionary trait that broadens their experience and whets their independence.

That will never in a million years justify the misogyny and destruction that those infamous university sects carried out - truly obnoxious behaviour for which youthful playfulness will never be an excuse - but it raises a question for De Montague, one that ultimately trends with his beliefs long held about dissolute boy being the father to the man and thank God for it. The question is, does any nation really want a leader whose copybook is utterly unblemished? Whose squareness in their late teens and early twenties was powerful enough to overcome Darwinian imperative? After all, thanks to social media, we've all seen how mind-numbingly drab kids who are well behaved at school turn out in middle age.

It's not just future statesmen who should tread the path of excess, in order to one day reach a level of maturity requisite to doing their job. Would you consume music, literature or art created by people who, while their peers at university were dropping mindbenders and humping each other like jackrabbits, were sipping lemonade and strumming He Is Risen on rainbow- striped ukuleles? No. Their work would likely be naive, insipid and pack all the existential punch of a damp kitten. Oscar Wilde is just one cultural luminary who rejected long-standing conventions of morality and lauded debauchery - right up to the point at which he was imprisoned for 'gross indecency'.

Tom Hardy's spell being addicted to booze and crack - the period during which he was 'a shameful statistic', in Hardy's own words - was a personal trauma for him, and one cannot but celebrate and applaud his success in conquering his demons, but when it comes to that life phase's power as a vocational rite of passage, surely the Legend actor would be the first to admit that it worked wonders for his emotional range and his grasp on the outer reaches of the human condition. And, of course, the same goes for Angelina Jolie, who is open about her prolific dabbles with heroin and cocaine in decades past and yet currently spends a good chunk of her time as a United Nations special envoy.

Similarly, would David Bowie have anything like the back catalogue of mostly fascinating recorded material were it not for his period living on 'red peppers, cocaine and milk'? The man lived in a house full of ancient Egyptian artefacts, thought witches were stealing his semen in order to impregnate themselves during Walpurgis Night, and that Jimmy Page - who owned the English home of late black-magic philosopher Aleister Crowley - had evil designs on his soul. He eventually rejected behaviour that would have been catastrophic for his long-term development and came through the period a vastly superior creative force. Lord, even Pope Francis, as a young Jesuit scholar, had a girlfriend with whom he danced the tango in Buenos Aires night spots - in Vatican circles, an affront to decency as grave as any. Many might argue that a far fruitier youth would be infinitely more conducive to a life spent leading a flock of 1.25bn mortals, all facing the everyday struggles that come with human flesh and the human spirit.

Similar stories of notable folk coming through youthful uninhibited existences to achieve greatness are abundant. What of the sexual rambunctiousness of the youthful Pamela Harriman, whose numerous affairs with men of prominence and wealth did not prevent her from becoming the 58th United States ambassador to France? Or that of Tim Jeffries, the Green Shield Stamp heir who squired a seemingly inexhaustible supply of (mostly model) girlfriends before growing up, turning his back on the playboy lifestyle, and becoming a family man with a level of rounded maturity that would surely be absent but for his wilder earlier experiences?

Who could deny that those who, during their youth, engage in wayward self-expression and sybaritic indulgence at Burning Man and other such festivals are more likely to become compelling adults? What man with any scrap of imagination doesn't relish propping up a bar with a drinking partner who partook in peyote binges with Native Americans or soul-purging ayahuasca ceremonies with Amazonian shaman, while their childhood buddies were busily becoming Ned Flanders clones in insurance broker's school? Who doesn't fraternise with more gusto when one's company perhaps experimented with their sexual mores? (In the case of De Montague, forging a brief but perversely fulfilling relationship with an alpaca during a lonesome trek through the Andes. He rarely wears jumpers made from any thing else these days.)

No, youthful hedonistic indulgence doesn't just help people prepare for high achievement: it is an essential base metal for the alloy of excellence; an essential presence in the portfolio of experience for all who wish to become genuinely rounded. Or, as hyper-literary novelist Roman Payne put it in his novel The Wanderess: 'Intoxication, like sexual euphoria, is the privilege of the human animal. Sexual frenzy is our compensation for the tedious moments we must suffer in the passage of life. 'Nothing in excess', professed the ancient Greeks. Why, if I spend half the month in healthy scholarship and pleasant sleep, shouldn't I be allowed the other half to howl at the moon and pillage the groins of Europe's great beauties?'