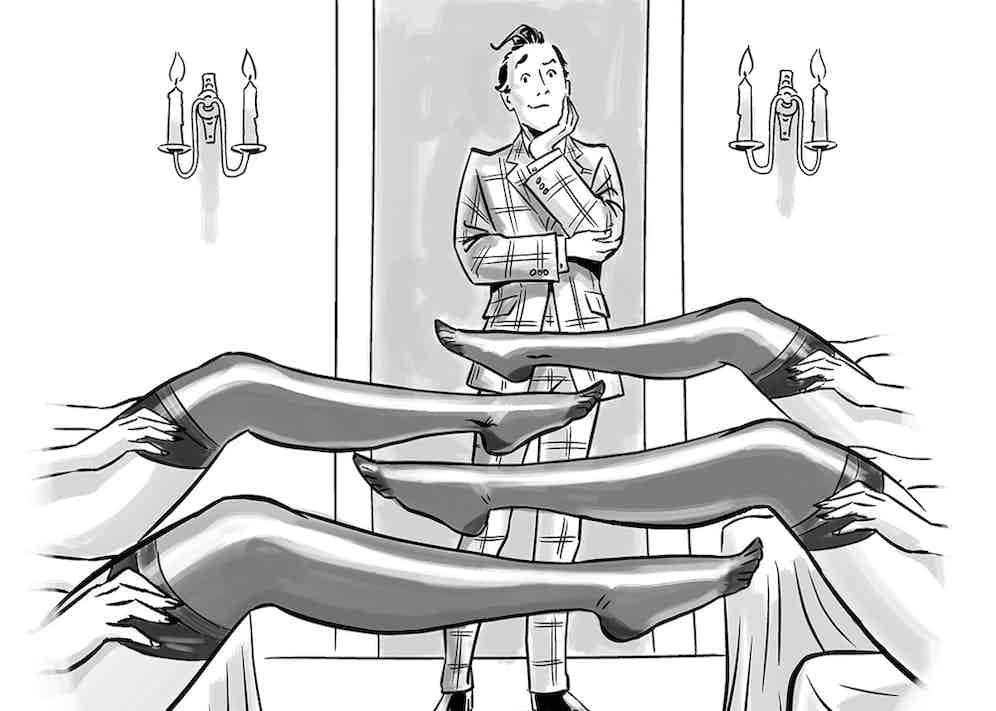 Modern life is complicated, which is why we contemporary homo sapiens simplify it at every opportunity. Rather than cooking, we dine out; most people these days watch, rather than read, the news. And yet, when it comes to coitus, most of us seem to prefer it complex. At least, that's what our collective lifestyle choices would imply. We devote a prodigious proportion of our time, money and effort to the pursuit of amorous encounters.

Call me contrary, but given the abject disappointment strewn along the labyrinth path that may, but probably won't, lead to 'Kind-of Happily Ever After', doesn't it make sense to instead sate one's innate need for companionship using high-class courtesans? Ladies who not only look stunning, but prefer opera to reality TV, Perrier-Jouët to Cristal, Proustian reflection to whimsical self-help? An exquisite concubine, who'll fulfil your every fantasy with such finesse that you'll finally realise you've been lusting after hamburgers for years when you could have been feasting on entrecète?

'Genuine' lovers can be brutally expensive. Cast your eyes over the section of your bank statement covering the period of your last relationship. How much did it set you back? What did you spend on drinks, flowers, fine dining, gifts and exotic holidays? A substantial amount more than you'd intended, I'd imagine, and, assuming you've split up, surely that money could have been invested more wisely. Employ an escort, and all expenditure is settled upon in advance.

And really, how many 'serious' relationships genuinely unfold in a spirit of utter honesty? I would argue that deceitful wiles nearly always play their inevitable Machiavellian role. Men, in particular, are prone to claiming diverse enthusiasms and talents, and feigning a far greater affiliation with curtains, wallpaper and monogamy than they in fact hold; our masquerade weaves the impression that the imminent frantic exchange of bodily fluids has nothing to do with biological imperative, and is always the start of something magical. With a call girl, there is no need for such tiresome duplicity. She gets her Christian Louboutins, and you get to fulfil your heart and loins' desires. It's the entire game of courtship distilled to its essence.

Some players will argue that if filthy lucre has changed hands, the thrill of the chase is lost. Really? Even the more successful participants in the amorous arts - let's be honest - don't always secure the girl they desire. With a tastefully selected lady of the night, you get exactly what you desire, both in terms of appearance and services rendered. There's no need for subtle hints or begging when broaching the more rarefied realms of sexual endeavour. Everything has a price.

Relationships are too tempestuous, too draining, for a man faced with modern life's myriad demands and challenges. If you're single, expending vast amounts of mental energy agonising over a girl is juvenile - a little adolescent. If you're loved up, consider all the hours squandered listening to your paramour babble on about her weight, her misogynist boss and whether you were thinking about her mother when you last made the beast with two backs. In what other realm of life would such emotional effluence not be tolerated? With a prostitute, you just plug, play, pay and go. That's the arrangement. There'd be no accusations that you were using her when you failed to call, and you certainly wouldn't be expected to meet her family. Even concerning yourself with her satisfaction is optional. And if that sounds callous, would you worry about how your broker feels when a transaction is complete?

The exemplary historical figures with a predilection for courtesans are too numerous to name.

Fornication and disease are synonymous, so we should discuss the gift that keeps on giving. Despite having myriad partners, with an escort the risks are actually reduced. The very nature of her career means that, if she doesn't take precautions, she won't survive in the industry for long. STIs are not good for business. If the pudendum resembles Passchendaele, clients will surely blench. At her insistence, customers will proceed with protection or not at all - which is not always the case with the delectably nubile ladies one meets in even the more salubrious nightspots.

Meanwhile, science - 'the poetry of reality,' according to Richard Dawkins - does not condemn fiscally motivated, licentious behaviour: in fact, it provides a precedent. In 2007, researchers at Singapore's Nanyang Technological University published a paper on long-tailed macaques trading grooming services for sexual access to females. In other words, we're genetically predisposed to prostitution. Refute this theory if you dare, and you'll encounter the aforementioned Dawkins - one of nature's most intractable phenomena. I once saw him rip the arms off a creationist (or was it an ape?).

The exemplary historical figures with a predilection for courtesans are too numerous to name, but bear in mind that Lady Emma Hamilton was a harlot, and Viscount Horatio Nelson found happiness in her arms. If it means being in the company of the naval commander who determined the character of modern Britain at the Battle of Trafalgar, why shouldn't you procure carnal gratification in a similar way?

Many will protest that prostitution exploits women - a view that promotes patronising attitudes and reinforces the ridiculous concept that sex is taboo. Yes, a prostitute chooses to sell her body, but writers sell their creativity: a cathartic and intensely more personal experience than a purely physical act, yet no one claims we've been violated. We have both commodified ourselves, so why is only one acceptable? As long as you are respectful and coercion is not involved, where is the harm?

The women involved are entrepreneurs. They're not sitting around waiting for handouts from states or husbands. They stimulate the economy, arguably lower the number of sexual assaults, eradicate deceit and free men from their iniquitous instincts, allowing us to focus on more important, virtuous pursuits (admittedly, I can't think of any at the moment, but I'm sure I will). We should be proud to associate with them.

Finally, and most persuasively of all, try suggesting to a prostitute that you get married and have children!