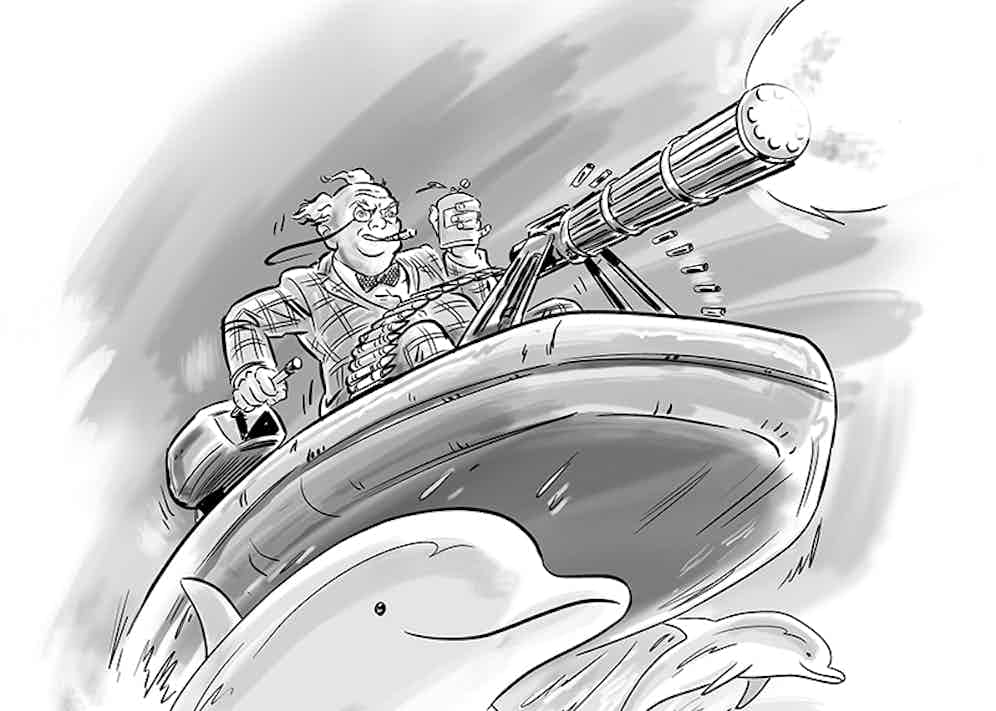 De Montague is incensed. He is literally apoplectic. He's just accidentally bent his sapphire-festooned, platinum swizzle stick in rage. He is going to go scorched- earth on the town of Taiji. He is going to go Old Testament... no, inflict State of Israel-type wrath on it. He is going to enact a karmic retribution on the fishermen who inhabit this axis of evil so profound that the de Montague countenance will occupy the nightmares of children for endless generations throughout the Wakayama Prefecture.

He is going to round up the fishermen in a circle until they are terrified and at their wits' ends. He is going to select the most trainable amongst these, and sell them off to S&M clubs to be prostate-milking gimps, or perhaps to Chinese sex-toy factories where an endless array of axle-greased, alternative-lifestyle implements can be tested on their ever-expanding orifices. Then he is going to drag the rest to the edge of the water so they can face the scene of their over-300-year-long shame and dispatch them to a place where they can perpetuate evil no more. Finally, he will mount their heads on stakes as a warning to all. As de Montague forgot to adequately arm himself with anything except a staghorn, mother-of-pearl-inlayed Laguiole corkscrew, it could take a while. But fear not - he and his army of Gurkha commandos will get the job done.

Don't be mistaken. De Montague is no Birkenstock-wearing, redwood-hugging, hippie-dippie nutball. You will not find de Montague cavorting with the smellies at the Burning Man festival. Quite the contrary. De Montague was once arrested for trying to poach a particularly attractive vicuÃ±a to make into an opera cape. The Servicio Forestal y de Caza still has a bench warrant out for him in Peru, for what they call a 'disturbing act against nature'. To be fair, de Montague was simply trying to sneak up on the beast from behind. Not wanting to sully his Rubinacci stalking suit, he had removed it and hung it on a low hanging branch. Is it de Montague's fault that he's made the dedicated lifestyle choice to 'go commando' at all times? Yes, while it's true that when taken out of context, the pictures are a little, ahem, incriminating, but he was just trying to wrestle that spry, lithesome, gorgeous beast to the ground. But I digress...

De Montague has just watched the Academy Award- winning documentary The Cove, and he's shocked, saddened and outraged. The film, which de Montague urges everyone to watch, chronicles the annual Taiji dolphin drive hunt. Each year, the fishermen of Taiji position their boats beside a well-known dolphin migratory route. They lower long steel pipes into the water and strike these poles with mallets. Because dolphins navigate with sonar, this creates a terrifying wall of sound that drives them towards the shore and into the fishermen's nets. They are left frightened, crowded together and trapped overnight.

The next day, dolphin trainers from around the world come to select the most trainable specimens - invariably full-grown females. These are then sent to aquatic theme parks around the world, with each dolphin bringing well over USD100,000 in revenue to the town of Taiji. What happens to the remaining dolphins - the babies, the males and the older animals? They're dragged roughly by motorboat into a secluded cove, where they are stabbed repeatedly with spears until the sea is thick with their blood and screams.

Each of these dolphins is killed for meat, and fetches only a few hundred dollars. Attempts by billionaire James H. Clark to negotiate the release of these dolphins by offering to pay higher- than-market rate for each animal freed were rejected by the fishermen of Taiji as an 'affront to their tradition'. Clearly, theirs is a tradition of profound douchebaggery. And this, despite the overwhelming scientific proof that due to high mercury levels in their meat (resulting from global pollution), dolphins are dangerously toxic to ingest. Furthermore, the town of the Taiji consistently campaigns to introduce dolphin meat into school children's diets. Any attempt to report on the annual slaughter has resulted in the journalist being harassed, attacked and intimidated by the local Taiji denizens with the full support of its local government.

As de Montague has said earlier, he is no Rainbow Warrior nor World Wildlife Fund diehard. So what makes a dolphin different to him than, say, a caiman alligator destined to be made into his loafers, or Strasbourgian goose having its liver enlarged for de Montague's amuse-bouche? Because you have to be a knuckle-dragging troglodyte not to realise that dolphins are among the most intelligent and sentient species on earth. In terms of creative behaviour, cognitive and communicative abilities and self-awareness, they are incredibly sophisticated.

There have been innumerable stories of dolphins rescuing distressed sailors, swimmers and surfers, and countless examples of dolphins repelling shark attacks and saving drowning humans. Good grief, a couple of years ago, dolphins even saved a dog that fell into the canals on Marco Island in Florida. The beleaguered hound in question couldn't climb back up the steep canal walls and, after several hours, was struggling to stay afloat. Incredibly, a group of dolphins arrived and let the dog climb onto their backs, where it stayed for 15 hours as they called out for help; finally, a group of the slightly less intelligent species known as humans plodded along and pulled it out of the water.

In Ancient Greece, it was forbidden to kill a dolphin because there were so many instances of them rescuing shipwrecked mariners. De Montague's point is, when was the last time an alligator, goose or vicuÃ±a saved a human being? Put it this way: if you're ever in danger of drowning and someone pulls you out of the water, your natural inclination would be to show him a little gratitude, right? De Montague does not consider a spear in the face - the preferred execution method of the Taiji fishermen - to be grateful behaviour. In simple terms:

if, on a moral scale of one to 10, human beings hover around a value of five - a theoretical midpoint between good and evil - then dolphins score 10 out of 10. They represent the absolute value for good.

When challenged about the morality of their profession, the fishermen invariably reply that this is their tradition, one that is more than 300 years old. But applying this same argument, you could legitimise another reprehensible ancient profession known as slave trading. De Montague respects the fishermen of Taiji enough to know that they will not change their deeply embedded mindset. He is also aware that the Japanese government persistently tries to cover up their actions. The only long-term solution, therefore, is a dead-of-night parachute drop with a platoon of Gurkhas to kill each and every one of the dolphin killers, so that they can no longer be a lasting affront to decency, and so that we can shift the moral value of humanity back a little bit in the right direction.