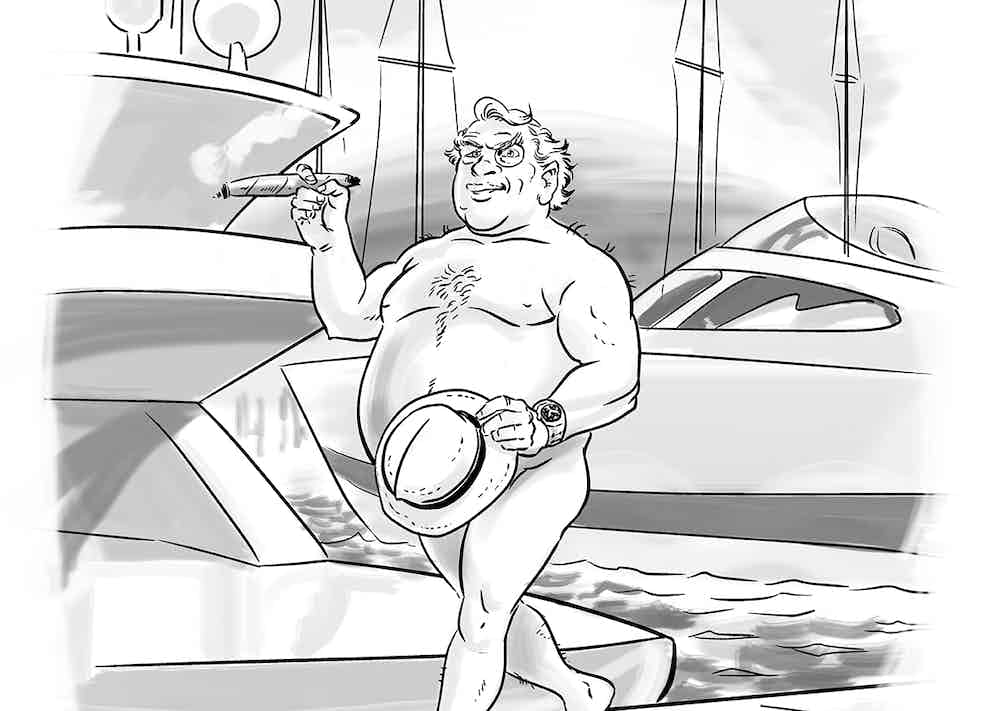 Naturism, naturalism or just plain nudism - call it what you will, but with summer here, de Montague feels an overwhelming sense of well-being as his unfeasibly handsome gaze lingers over the heroic silhouette of his favourite sculpture, the l'Éphèbe d'Agde or Youth of Agde. A bronze statue in the Hellenistic style dating to the second century BC, l'Éphèbe d'Agde was discovered in 1964, half-submerged in the muddy bed of the river Hérault, on the southeastern coast of France. Standing at just 1.33m, it depicts a young, clean-shaven nobleman at the height of his sensual beauty, and is believed to have been created by a disciple of the master sculptor Lysippos.

Once residing in the storage rooms of the Louvre, this paean to the splendour of male virility is now the crowning glory of the Agde Museum in Cap d'Agde, a tranquil Mediterranean resort town in the Languedoc-Roussillon region of France. Cap d'Agde is also famous for being a naturist paradise: during the summer months, it receives in excess of 40,000 visitors and is the site of de Montague's annual pilgrimage. The reason that de Montague feels so overcome by the sensory delight induced by the warm summer breeze caressing his bare, shaven loins is that he - like the youth depicted in that iconic bronze statue - is as naked as a jaybird.

That's right, de Montague is naked. Totally nude. Bare- assed naked in public - and proud of it. You see, if he'd been around at the turn of the 19th century, de Montague would have been an honourary member of the earliest naturist club known to have existed - the short-lived Fellowship of the Naked Trust, which was established during the British Raj by Charles Edward Gordon Crawford, a District and Sessions Judge for the Bombay Civil Service. Other, more famous fans of naturism include John Vernou 'Black Jack' Bouvier III, the father of Jacqueline Kennedy Onassis and Lee Radziwill, who achieved his signature copper-hued suntan by sunbathing nude on the rooftop of his Park Avenue apartment; and Dame Helen Mirren, who once said, 'I do believe in naturism and am my happiest on a nude beach with people of all ages and races.'

Today, numerous associations like British Naturism champion the glory of nudity, both private and public, and espouse a return to our pure, essential, primal selves by discarding our clothes - and with it, the oppressive concept of original sin. By being unencumbered by clothing, we reconnect with a state of pre-Judeo/Christian guilt, one of utter innocence and joyful embracement in the irrefutable beauty of the naked human form. The words of the poet and naturist Walt Whitman are more relevant than ever: 'Never before did I get so close to Nature; never before did she come so close to me... Nature was naked, and I was also... Sweet, sane, still Nakedness in Nature! - ah if poor, sick, prurient humanity in cities might really know you once more! Is not nakedness then indecent?

No, not inherently. It is your thought, your sophistication, your fear, your respectability, that is indecent. There come moods when these clothes of ours are not only too irksome to wear, but are themselves indecent.'

For many years, Cap d'Agde has been the critical epicentre of naturist expressionism. The tradition of social nudity started after World War II, when the Oltra brothers, who cultivated olives just beyond the sand dunes adjoining the 2km-long beach, noticed an increasing numbers of campers venturing to their lands to sunbathe in the nude. Rather than chasing them off, the brothers welcomed them, even creating the Oltra Club, a caravan and camping spot that quickly gained in popularity throughout the '50s and 'free love' '60s with young Dutch and German nudists. In the early '70s, President Georges Pompidou's redevelopment plans for the coastline of the Languedoc-Roussillon region excluded any plans for nude beaches. However, at the urging of René Oltra, he relented and eventually allowed the Oltras to not only keep their nude beaches, but to also lay the foundations of what would eventually become the world-famous 'Naked City'.

So, what exactly is the attraction of spending your day completely naked in the company of other naked people, and in the glory of nature? When you discard your clothing, you simultaneously shed your irrational worries; you jettison the unremitting stresses related to your daily occupation. In our modern world of over-urbanisation, swelling population densities and constant sensory overload - the worst of which is a relentless assault by beeping, shrilling electronic devices - we need a radical solution. We need to find peace, and the first step towards this is stripping down to our barest selves.

We need to get naked - right now.

But lest de Montague comes across as a sandal-wearing, quinoa-eating socialist nutball whacked out of his gourd on mescaline at the Burning Man festival, let him elaborate on the philosophy of the erstwhile Fellowship of the Naked Trust. The members are certainly not disciples of the oft-quoted naturist author Adolf Koch, who saw nudism as a way to free the proletariat from 'authority-fixated conditioning' and material trappings of bourgeois society. De Montague is all about the material trappings of elitism, which is why - even when he is strolling down the boulevards of Cap d'Agde, as the French say, magnificently à poil - he is wearing a £2,500 Bates Superfino panama hat, hand-woven in Ecuador from straw so fine it feels like Madame de Pompadour's silk underpants. On his wrist is a yellow-gold A-Series Royal Oak, double-signed by Audemars Piguet and Bulgari, that had once been gifted to Venezuelan President Carlos Andrés Pérez from the Shah of Iran (when Pérez was indicted for embezzlement and was desperate to pay his legal bills, de Montague got this off him for a song).

As always, clenched between his inhumanly white teeth is a pre-Revolution Cuban Davidoff, while his Prince Albert piercing has been fashioned from ruthenium and set with a robin's-egg-shaped diamond by Harvard-educated cult jeweller Joel Arthur Rosenthal, better known by the acronym 'JAR'. This way, the sweatier amongst the common folk can instantly recognise his superior social and economic standing and make way as he cuts a bold, naked swathe from one end of the large four-storey Heliopolis complex - the most prominent feature of the naturist village in Cap d'Agde - to the other.

Nor should our beliefs be confused with those of another deeply misguided naturist writer, Richard Ungewitter, the author of Die Nackthiet, or Nakedness, who'd envisioned a naked utopia, where everyone was strictly of Germanic origin and had blue eyes. As a further demonstration of Ungewitter's status as a bona fide crackpot beyond his Aryan-pride leanings, in his purported utopia, people only ate vegetables and abstained from alcohol and tobacco. What utter balderdash. De Montague is living proof that there is absolutely nothing better for you than all of these substances in immense quantities.

No, the simple and honest mission of the Fellowship of the Naked Trust was to defend nudity, in all its forms, as the greatest celebration of life. Each time we shed our clothing, we are defending our right to uphold the naked human body as something beautiful and moral.

As an example of why we must never stop taking our clothes off, or become disconnected from the beauty of the human form, let me remind you of the debate that raged for over 500 years regarding genital nudity in classic art. Since the time of the Ancient Greeks, the naked human form - genitals and all - has been worshiped as the chalice of the divine. All the greatest painters and sculptors, from da Vinci to Bernini to Canova, rendered their subjects in the nude. But in the 16th century, Pope Paul IV - a man who was known for strengthening the power of the Papal Inquisition in Italy and Spain, and who also famously exiled all Jews to a ghetto where, he declared, they were without merit to receive protection - issued a papal bull that ordered genital nudity depicted in art to be covered up with fig leaves. Apparently, he was determined that there should only be one enormous penis on show in Vatican City.

However, de Montague likes to think we've come a long way since then. In 1987, there was a debate surrounding the 15th-century frescoes by Masaccio, the first great painter of the Quattrocento period of the Italian Renaissance, in Florence's Brancacci Chapel. In 1984, restorers had started to remove layers of grime on the Cacciata dei progenitori dall'Eden (Expulsion from the Garden of Eden), only to discover that, around 1680, an anonymous censor had painted fig leaves over both Adam's and Eve's genitals. To the credit of the chief restorer, Dr. Ornella Casazza, she immediately stated, 'To respect Masaccio, we must restore them to their original state.' To their nude state.

Benjamin Franklin was a nudist, as was Theodore Roosevelt. Dr. Seuss wrote the book The Seven Lady Godivas: The True Facts Concerning History's Barest Family, in which Lady Godiva and her six sisters wore no clothes because 'they were simply themselves and chose not to hide it'. And, before resting the case for naturism, naturalism or just plain nudism and all the bodily, mental and cultural goodness it provides, de Montague would like to quote Henry David Thoreau, literature's leading transcendentalist, a man who wrote the entire book Walden while rocking out with his cock out: 'We cannot adequately appreciate this aspect of nature if we approach it with any taint of human pretence. It will elude us if we allow artefacts like clothing to intervene between ourselves and this Other. To apprehend it, we cannot be naked enough.'