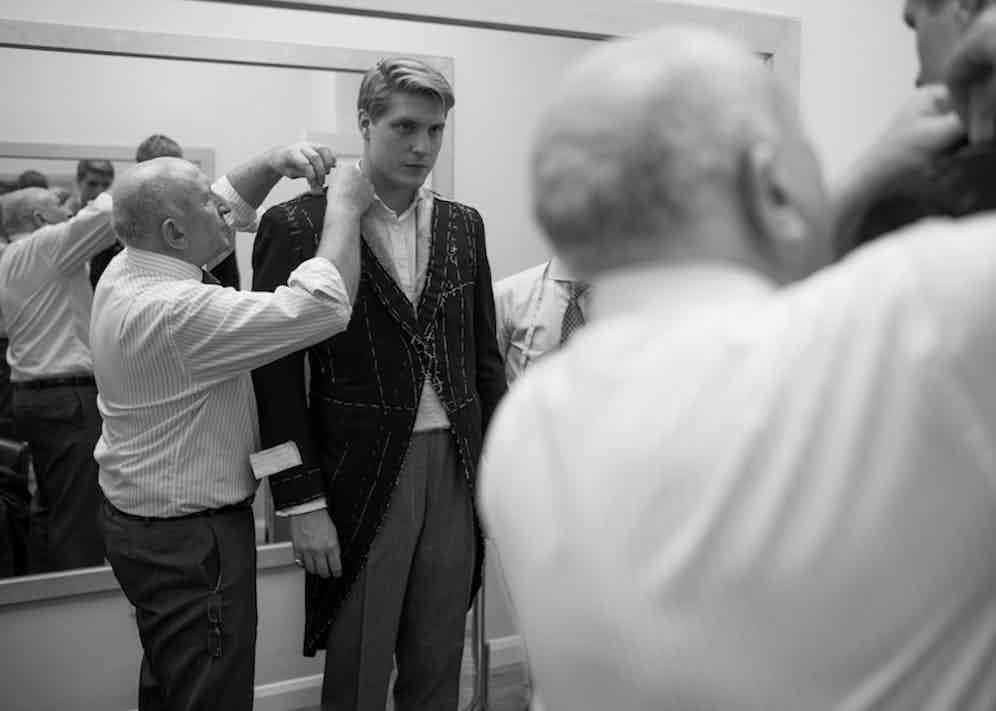 Dress for a wedding, in my humble opinion, is so much more fun for men than for women. Ladies can more or less rely on having to wear a dress in one form or another that isn’t white. And whilst I know that dresses come in many forms, for men, there are minimum three dress code possibilities to play with. These are traditional morning suit, suits or black tie.

I will start with the latter as it is not applicable in the case of my nuptials and shouldn’t be with yours. Don’t get me wrong, if you have already done it, then I am sure you looked marvellous, but I wouldn’t recommend it unless it is in the evening then at least it is performing its function. For now let’s stick with the first two. It just so happens that I will be doing both at my wedding.

The idea of making a change at the wedding might be regarded as a tad OTT; but don’t judge too soon, there are sound reasons. Well one really, and that is that if all goes to plan, it is going to be very hot and wearing a morning suit all day does not a comfortable groom make.

"The tails should graze your legs and the collar should sit flush against your neck.".

A morning suit is a tremendously hard garment to make. It is even harder to make a good ready-to wear version. The best tell of a ready-to-wear suit is the way in which the back of the collar sits way off the neck and shirt collar. The morning suit is no different here, but the extra tell is the way in which the tails stick 12 inches away from the back of your legs. The tails should graze your legs and the collar should sit flush against your neck. The coat itself has a complex array of panels that make this garment particularly difficult to make. So my best advice is to get this made by someone who has a good reputation for this specific piece of kit. In my case, when one of the most reputable house’s on Savile Row rang me to munificently offer their house to make the coat for me, on hearing who it was that I had already commissioned, such was their reverence and respect for him that they didn’t bother. The tailor is John Kent of Kent, Haste and Lachter. 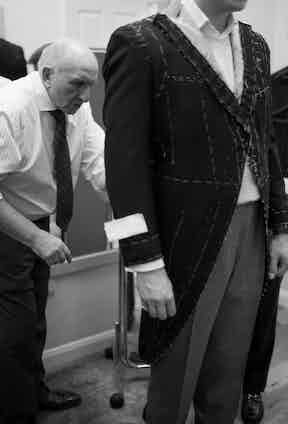 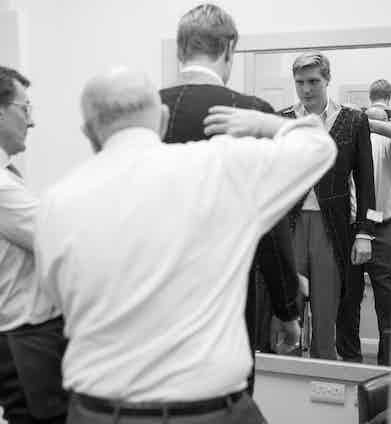 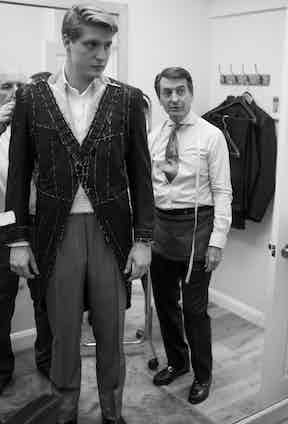 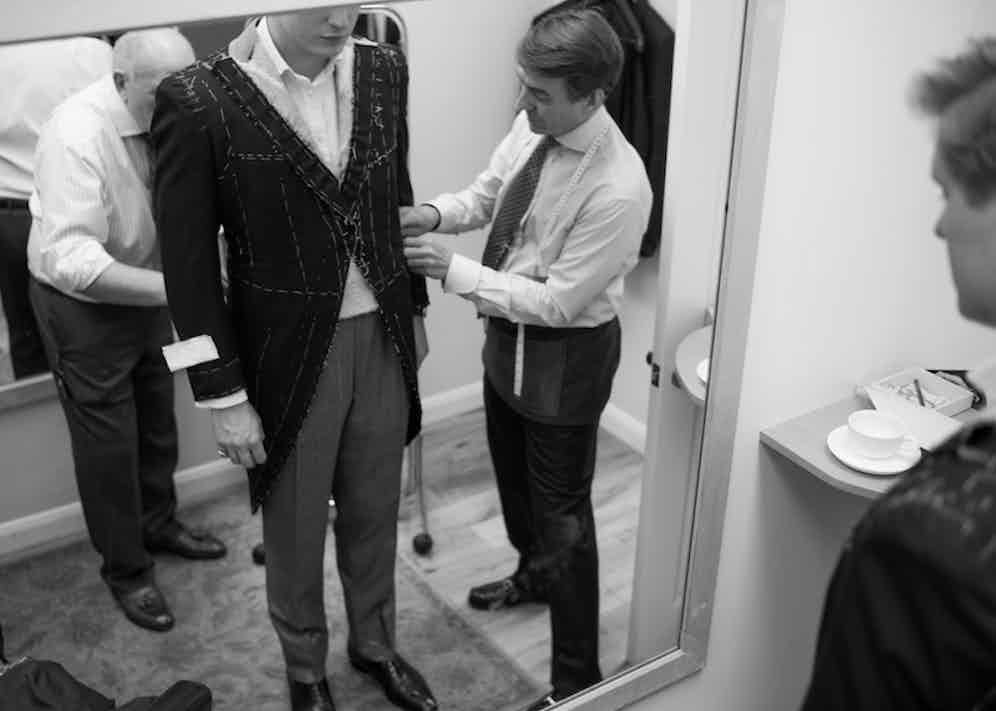 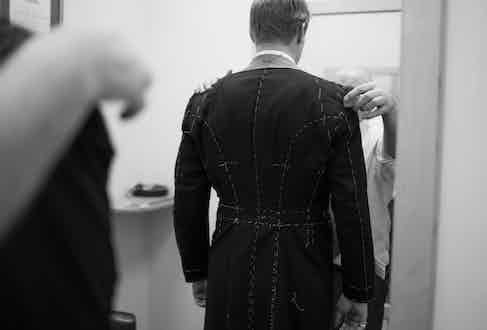 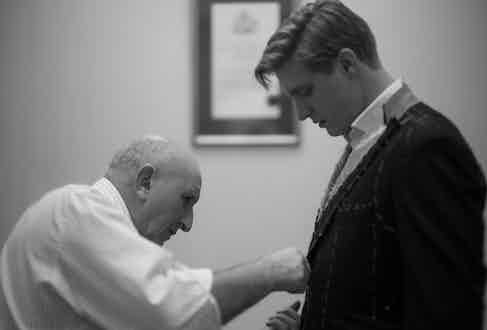 It is no secret that these three men are my tailors in any case. Usually I am seen to by Kent’s protege, the great Terry Haste. Terry can make anything, and was absolutely the man for the job. However out of deference, modesty and humility, he suggested that John should make the coat. So I decided to employ the whole triumvirate on Sackville Street, and ask John Kent to make the coat, Terry to make the waistcoat and trousers and Stephen Lachter to make the shirts.

The jacket is made from a black 10/11-ounce super 100 merino wool herringbone from Smith Woolens. Not the heaviest option but still strong and structured. The lapels sit at about 4 and a half inches and while there was the option to include a satin piping or turn back cuffs, during the process I backed off from those options as John’s lapels and fit were so striking that I decided that it is best to keep it clean and let his cutting do the talking.

The trousers were one part that I was worried about, as I am not overall fond of the slightly unflattering, unattractive assortment of striped patterns you get and houndstooth isn’t my favourite pattern. Thankfully I found a fantastic pattern material for the trousers, which isn’t offensive in anyway, a Scabal 12/13-ounce pure wool, ‘cashmere stripe’. They used to make it with cashmere hence the name but this is indeed a pure wool fabric.

The waistcoat is made from a blue nine ounce Irish linen from Lessers that will go with matching baby blue socks from London Sock Co.. They will be worn with braces so fish tails have been added to the back to fasten them in, high waisted to sit under the waistcoat and double pleated. The waistcoat will be a three button double-breasted piece. Ask to have a ‘V’ shape in the buttons of the waistcoat, this looks really sharp and accentuates the shape of your coat and lapels nicely. The shirt will be cream cotton with white-collar shirt. I have opted against a stiff collar despite the tradition simply because I see the poor buggers during Trooping the Colour fall flat on their faces because of the heat and I am not keen to repeat that particular performance when saying my “I’dos”. Stephen’s shirts have a great balance without being too tight. So while the shirt will not be sticking out over the waistcoat, it will not be clinging which helps to keep cool.

As for the coat, there is no getting away from it, it will be hot. But having had almost 8 fittings for this garment, it is fair to say that John has created a perfect morning coat. The balance is extraordinary, the shape is stunning, well fitted with a good amount of drape, a perfect back pleat (this is extremely hard to get right and a millimetre off can ruin the whole jacket), the lapels are a generous four and a half inches with a peaked lapel, lifting the strong shoulders and elongating the chest to make my posture seem proud, valiant and strong. Whereas the truth is that my back is arched at the top because of my terrible habit of slouching.

Four Weddings and a Funeral brilliantly satirised the morning suit as a garment that is thrown about and abused by late night dancing and illicit hook-ups. The pictures of Edwardian blades looking sharp, with the jacket almost wrapped blanket-like round their bodies, that had hitherto been the vision of what a morning suit was all about, was being destroyed by pop culture and film. Few bother with a proper morning suit these days. I guess the Duke of Edinburgh can always be relied upon to look fabulous in his morning suit, outshining the competition. And who His Royal Highnesses tailor? That would be John Kent.

After the service, it is time for a change. Next entry will be a close look at my Cifonelli suit for the reception… 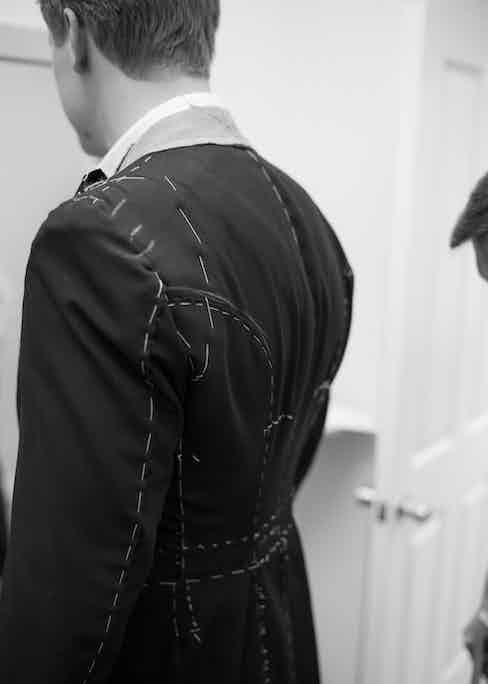 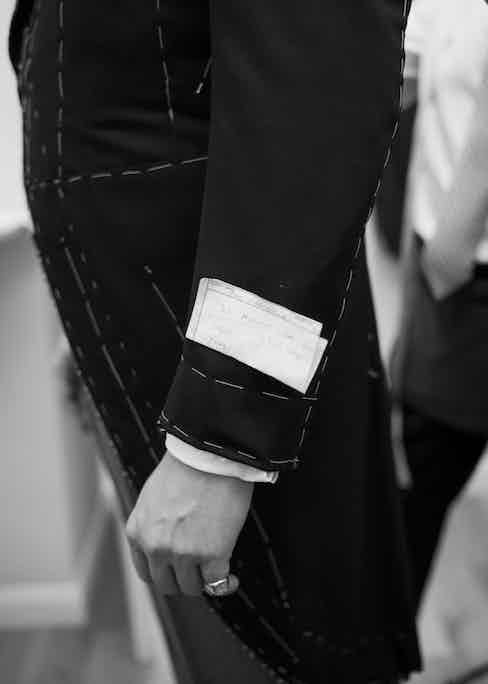 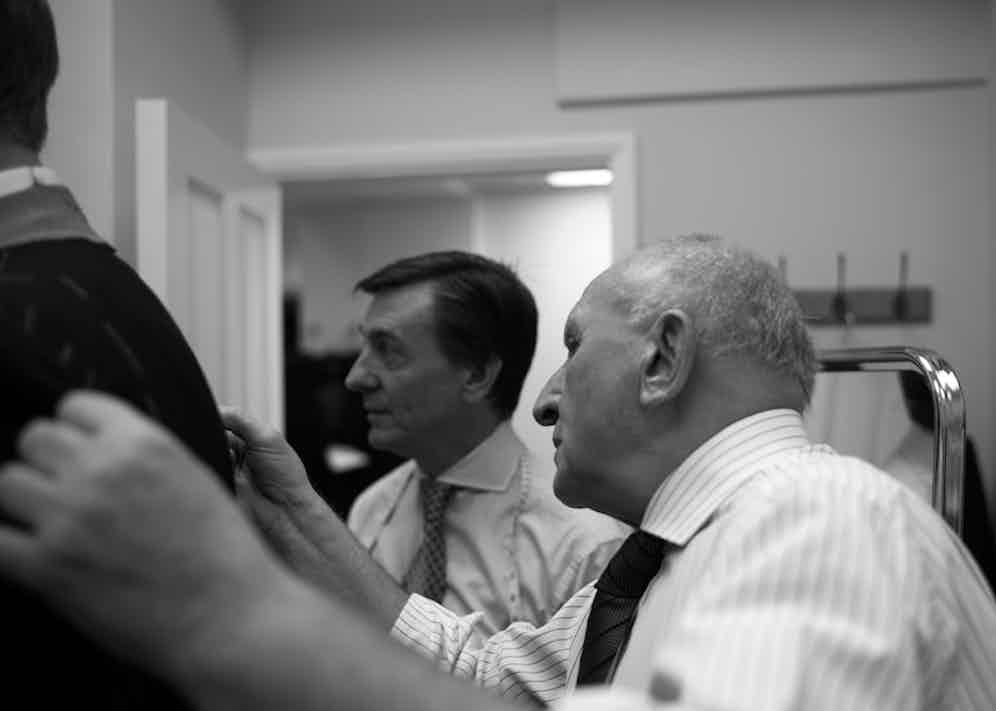