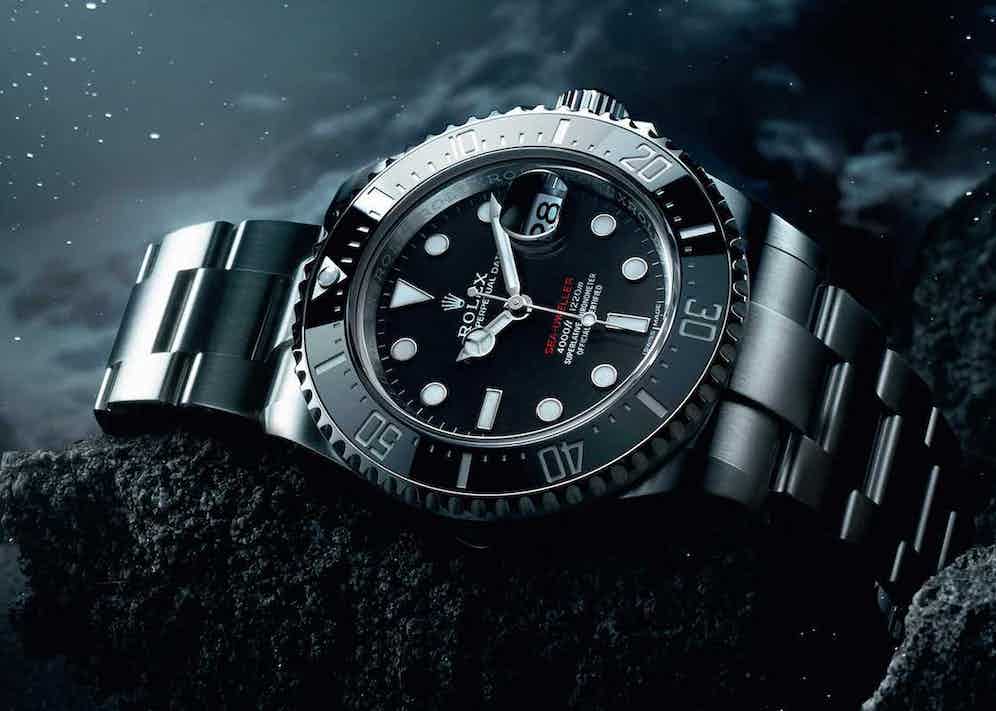 The ‘Single Red’ Sea-Dweller, reference 1665, was the watch that started the lineage of one Rolex’s most important professional tool watches. The very first ‘Dweller' was a prototype that was issued to professional divers to test in the field. The most interesting aspect of these watches was that they were not equipped with gas escape valves.

Rolex were experimenting with watches that could operate at much greater depths and so the prototype 1665 was depth rated to 500m/1650 ft. Recent research has suggested that there were ten of these watches made. Of the ten, seven were given to the underwater explorers who took part in the first Tektite project.

The first version of the Sea-Dweller from 1967 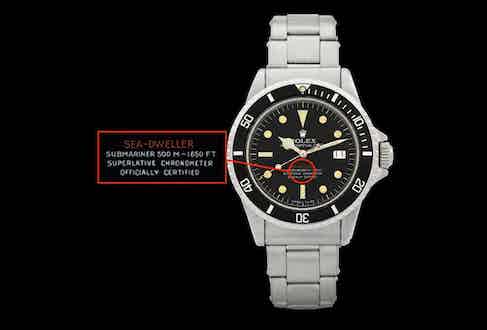 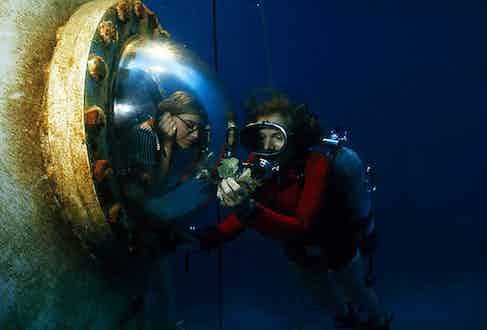 Tektite was an innovative experiment to build an underwater habitat in which the first aquanauts would live; which they did for 58 days — a record at the time and the perfect extreme test for the prototype Sea-Dweller.

Rolex worked with a number of organizations and agencies in the development of the Sea-Dweller. Divers had been using Rolex Submariners and the new prototype Single Red Sea-Dweller for professional diving work and specifically saturation diving, where the divers were able to work at significant depths as they were breathing Heliox: a mixture of helium and oxygen. 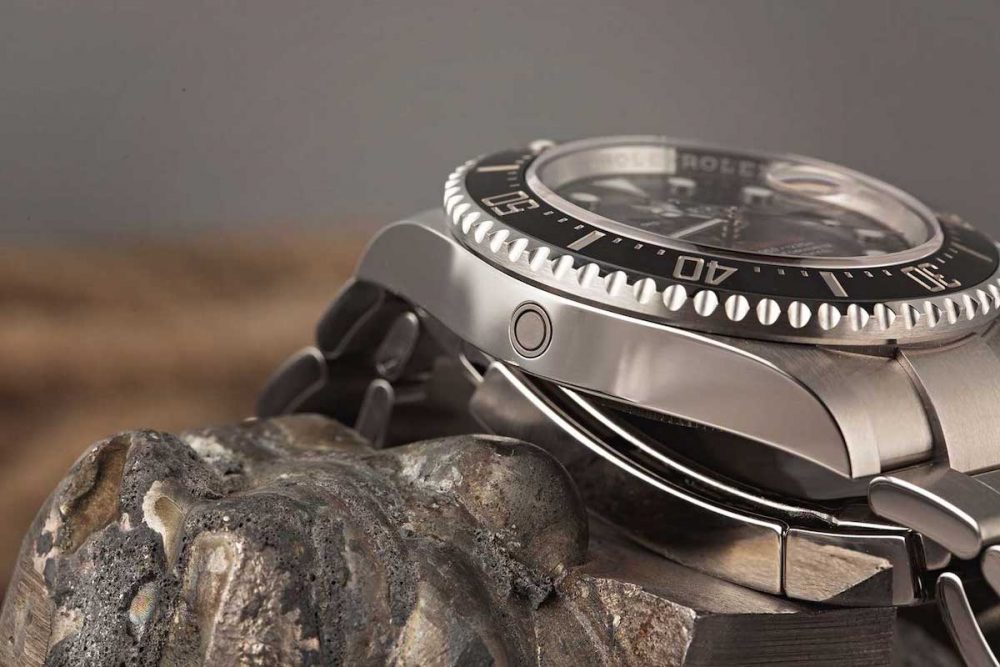 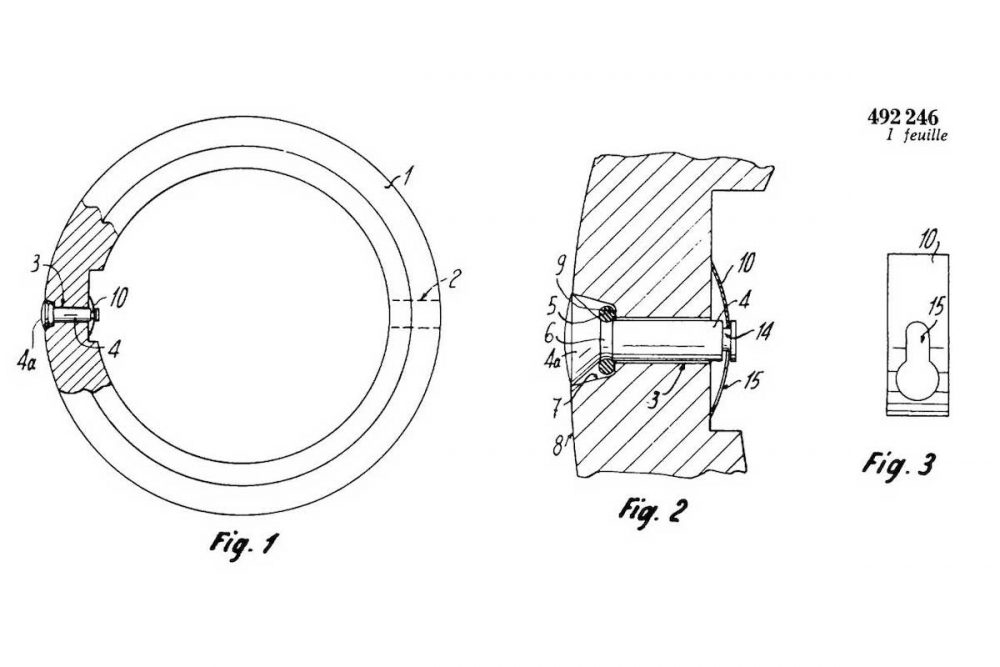 In 1970, Rolex received a patent for the gas escape valve from the Swiss Federal Institute of Intellectual Property 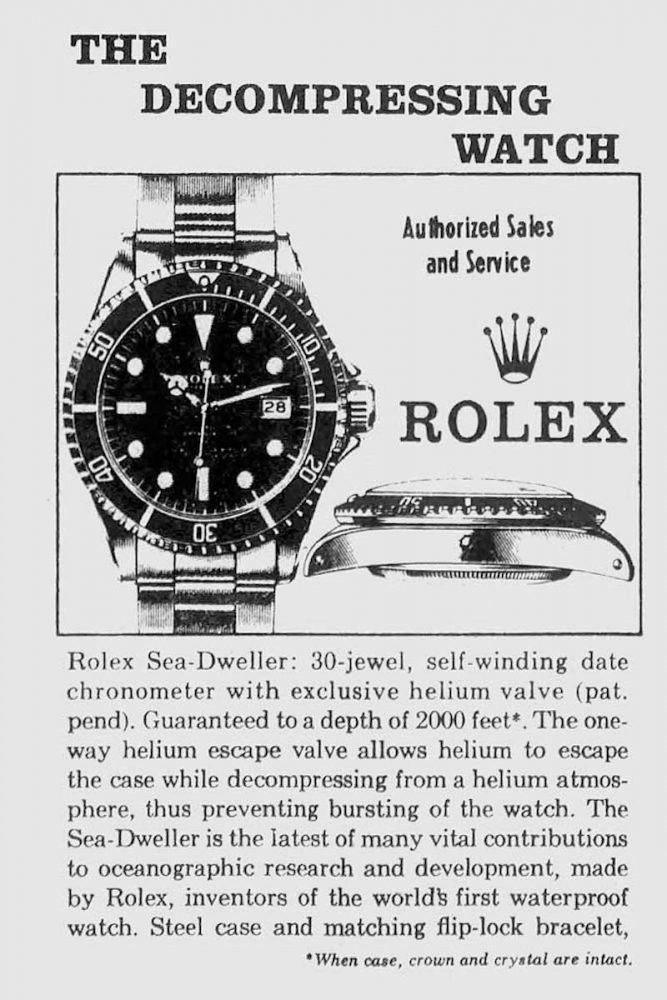 The problem was that the helium particles were small enough to seep into the seals of the watch and the watches were known to ‘pop’ their crystals as the divers decompressed and the gases tried to escape from their watches at a faster rate than they’d entered.

The helium escape valve was developed to combat this. It is essentially a one-way valve that allows the helium gases to escape safely from the watch. It worked and is still a key feature of Sea-Dwellers today.

Alternative to the Submariner 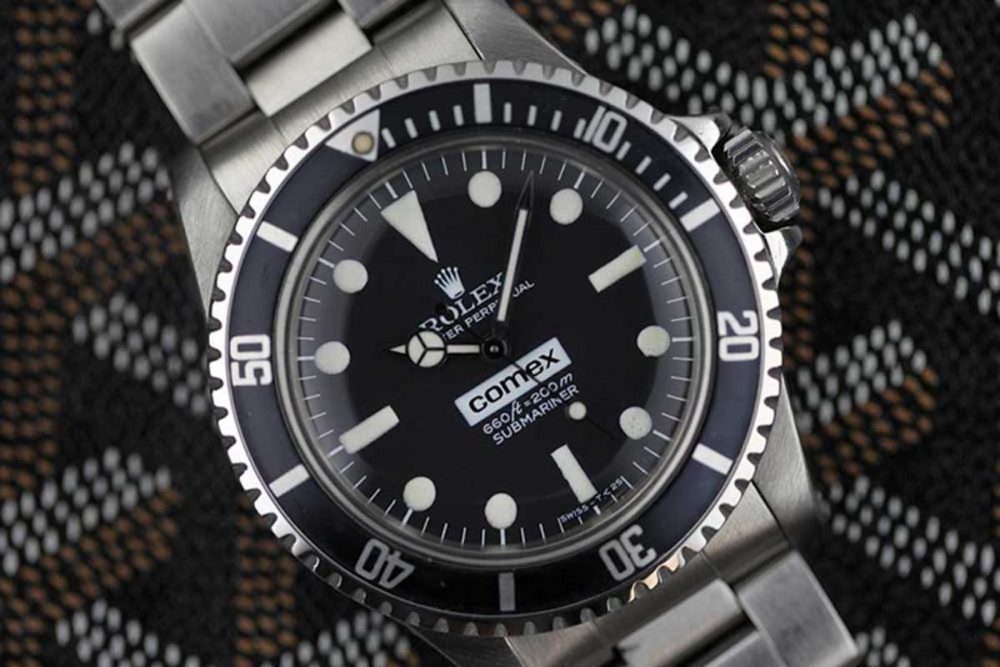 It’s a question that a lot of people wrestle with — to Sub or ‘Dweller. In reality, for all but the commercial divers, a Submariner is more than adequate for most needs. The modern sapphire Sub is depth rated to 300 meters or 1000 feet. It is, in fact, over engineered. So who, other than professional saturation divers, really needs a watch that can be used at depths of 1220 meters or 4000 feet? Well, nobody actually but it's very cool to know that it can! 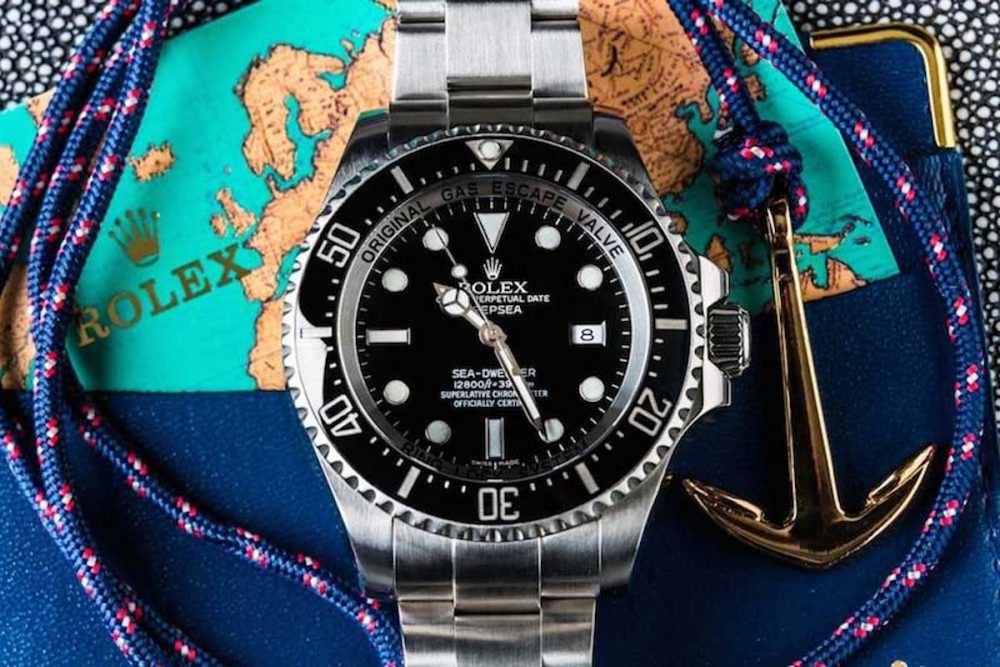 Introduced in 2008, the Deepsea took the Sea-Dweller to another level with an impressive water resistance up to 3,990 meters (Image: Bob’s watches)

Most people don’t even realize that the seas don’t even go that deep! To test the watches at this significant depth some ground breaking machinery had to be designed and built. Rolex turned to long term partners Comex for this, who developed the necessary testing equipment that can simulate the massive pressure that the watches would be subjected to at their limits. 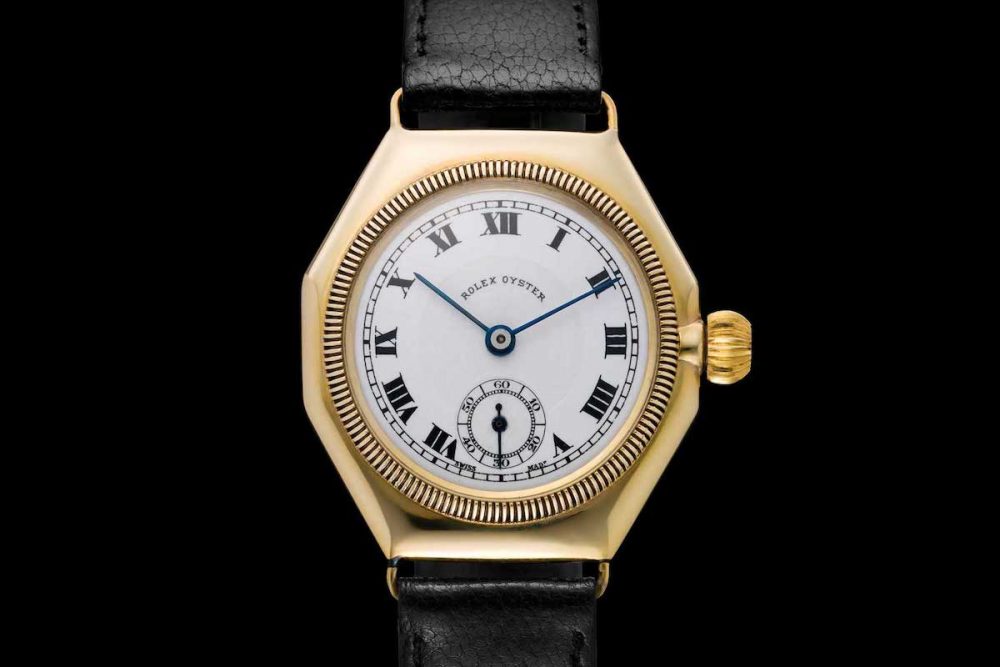 Introduced in 1926, the Oyster watch was the world’s first waterproof wristwatch

Rolex’s founder, Hans Wilsdorf launched the world’s first waterproof wristwatch in 1926: The Oyster watch. The Oyster case succeeded in water sealing the three traditionally ‘leaky’ areas of a watch — the winding crown, the crystal and the caseback.

The caseback of the Oyster case screws tightly against the mid-case of the watch, which is given extra protection by a rubber gasket seal. Similarly, the winding crown screws down tightly onto a tube attached to the mid-case.

Finally, the crystal is pressure fitted onto the case using a crystal retaining ring or bezel. It is this simple, yet perfectly engineered solution that has made all Rolex Oyster watches, and particularly the Sea-Dweller, the world-dominating force in water-resistant sports watches. 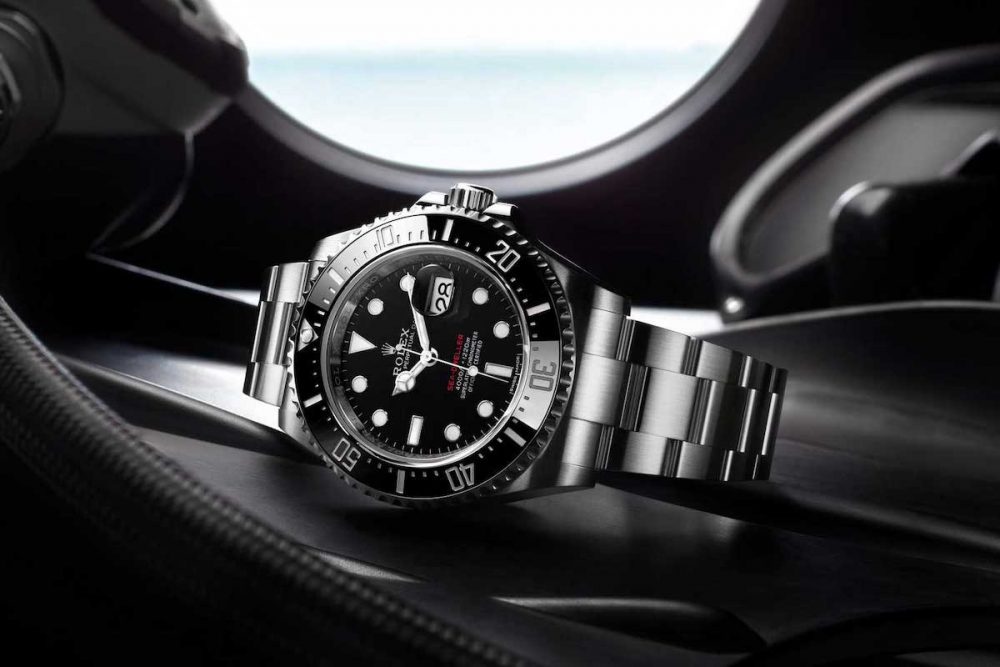 All Sea-Dwellers feature a date function, even on the prototype Single Red. Equally, no Sea-Dweller has ever featured a cyclops on the crystal. Rolex introduced the cyclops date magnifier in 1954 on the GMT Master, reference 6542 and on the Datejust line. It didn’t appear on a diving watch until around 1966 with the introduction of the Submariner date, reference 1680.

Of course, it would have been impossible for Rolex to have applied a date bubble onto the domed plexi crystal of the 1665 and not give the wearer a distorted view of the date aperture. With the introduction of a flat sapphire glass on the reference 16660, applying a date magnifier would have been possible but Rolex never did. Possibly because it could get knocked more easily when in use and therefore be a potential weakness or maybe they didn’t for purely aesthetic reasons. 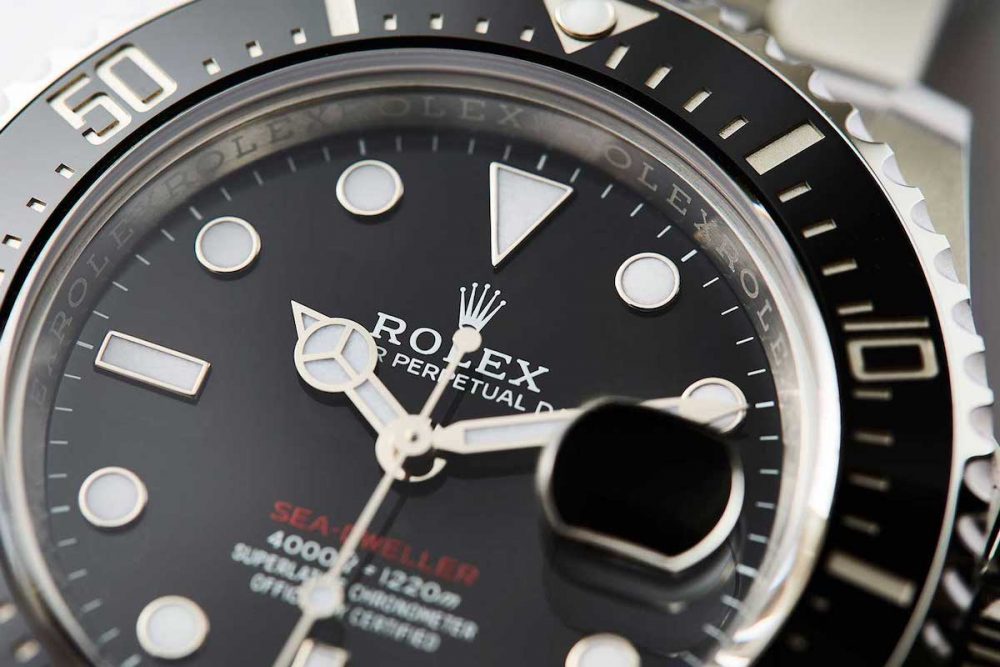 But now, on the occasion of the 50th anniversary of the Sea-Dweller, Rolex has finally put on the date bubble in this year’s Basel darling, the Sea-Dweller, reference 126600. This is now the result of both time and technology aligning to allow for the mounting of the cyclops and have it maintain its integrity all the way to its promised depth of 1200 meters (4000 feet). 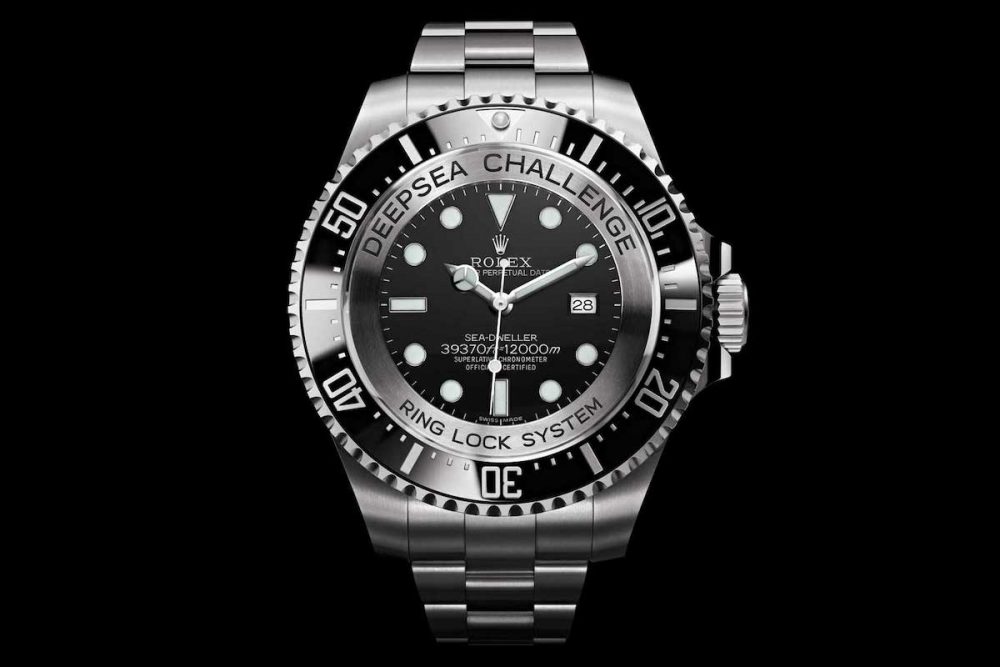 Rolex Deepsea Challenge from the 2012 expedition

In 2012 James Cameron, filmmaker and explorer, piloted the Deepsea Challenger submersible craft down to the deepest known part of the Earth’s ocean, the Mariana Trench. He became only the third person to ever visit its depths and the only person ever to accomplish it on a solo mission. 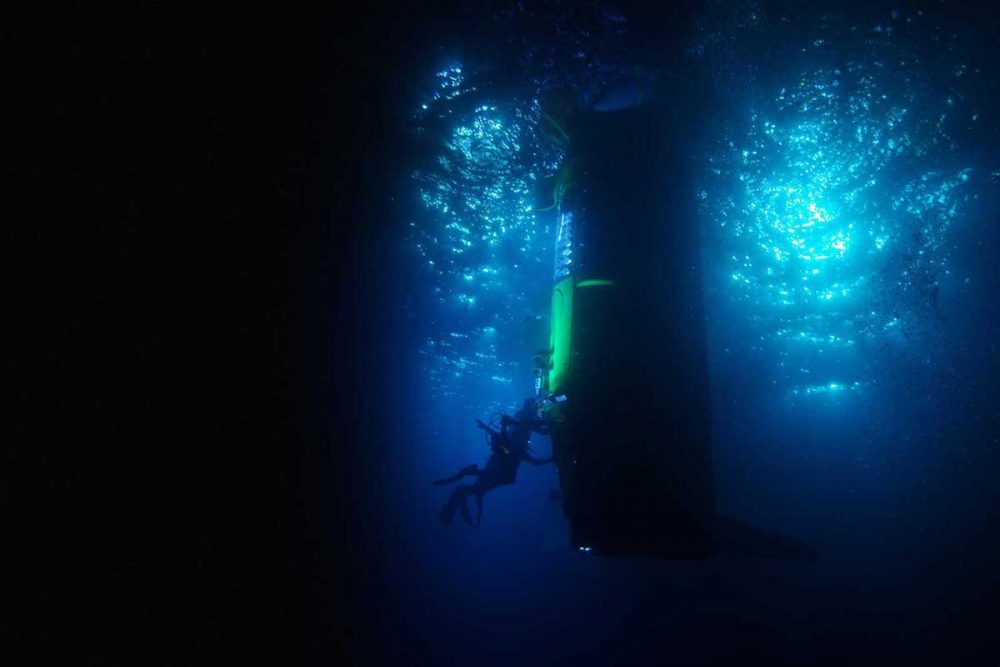 Rolex were partners in the mission and as a key part of their research and development they created another prototype Sea-Dweller – the Deepsea Challenge. Never commercially available, the behemoth watch measured a colossal 51.5mm across, 28.5mm deep and was depth rated to 12000 meters (39,370 feet)! The watch was attached to a manipulator arm, during the entirety of the dive mission, and functioned well at a mind-boggling depth of 10898 meters.

The Sea-Dweller is undoubtedly a very good looking divers watch. Similar, aesthetically, to the Submariner, the Sea-Dweller has a very passionate following amongst collectors who seek out rare variations. This has had a big impact on the market and now prices for Double Red Sea-Dweller are very high. 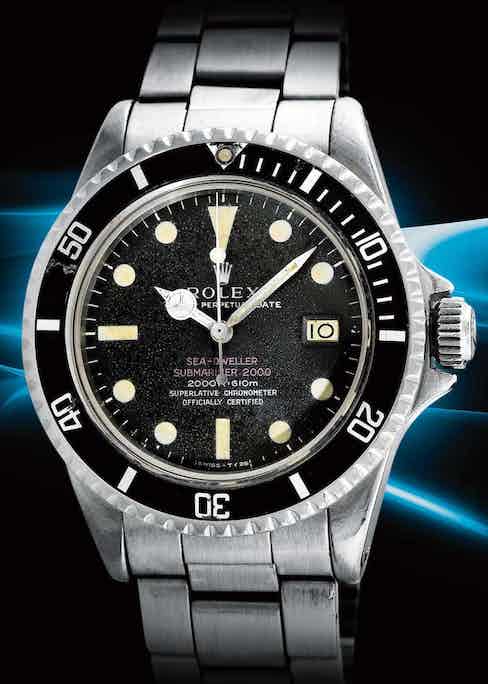 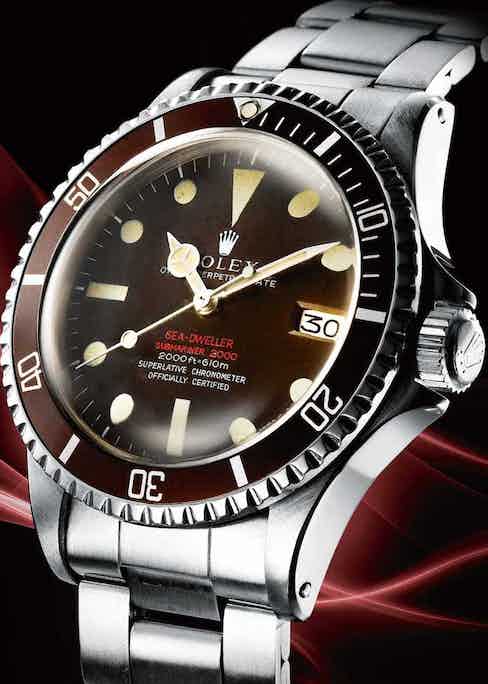 Comex issued Sea-Dwellers will always be sought after, especially when accompanied by the diver’s dive logs and other Comex associated paraphernalia. The two factory specification 1665s that are the main grails for ‘Dweller collectors are the Single Red and the Mk1 Patent Pending Double Red Sea-Dweller (Mk1PPDRSD).

The Patent Pending was the very earliest version that was sent out to retailers and had ‘Patent Pending’ as part of the caseback engraving text. Additionally, these watches are characterized by their two lines of red writing typically having faded to a very pale pink. 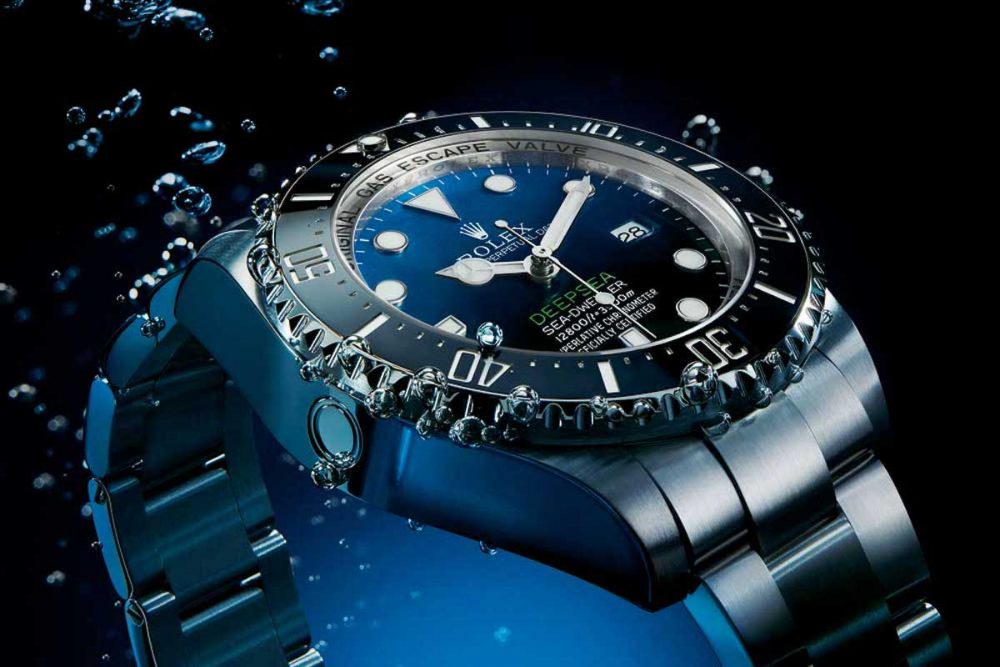 The Sea-Dweller has always had to be engineered to be as pressure resistant as possible. The pressure at the Deepsea’s limits of nearly 4km would be around 411 kg force per square centimetre. To enable the watch to withstand such tremendous force, Rolex developed a new case assembly that they named the Ringlock System.

Essentially, it is a high resistance ring that sits within the mid-case onto which an extra thick sapphire crystal sits on the top and a titanium caseback screws against at the back. Even back at the beginning of the family tree, the 1665 had an extra deep crystal, the Tropic 39, that allowed for the thick bezel assembly and the extra pressure that the watch would be subjected to at its limit. 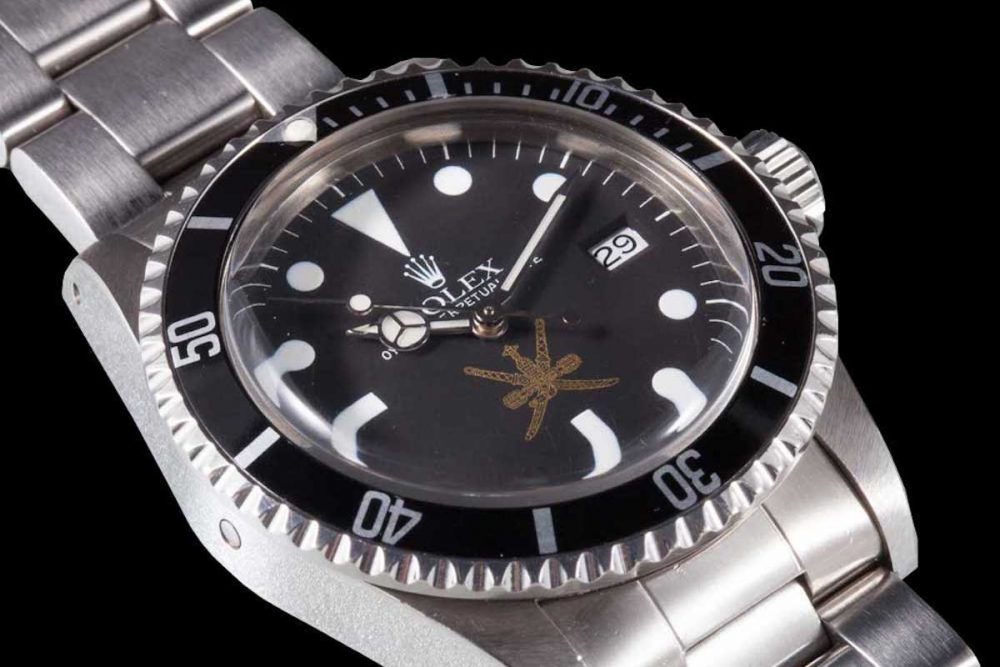 The Sea-Dweller Omani 1665 was made on commission from the Sultan of Oman, Qaboos bin Said

One of the most desirable special order Sea-Dwellers is the so-called Omani 1665. These watches were ordered by Asprey in London for presentation by Sultan Qaboos bin Sa’id. He presented these watches to members of the British SAS who had served to defend his regime during the rebellion between 1970-1976. The watches are identifiable by the presence of the red Omani Khanjar on the bottom half of the dial, replacing the four lines of text normally seen on the Sea-Dweller. It is estimated that approximately 90 examples were made. Additionally, there are four known examples with the Khanjar logo in gold…now find one if you can!