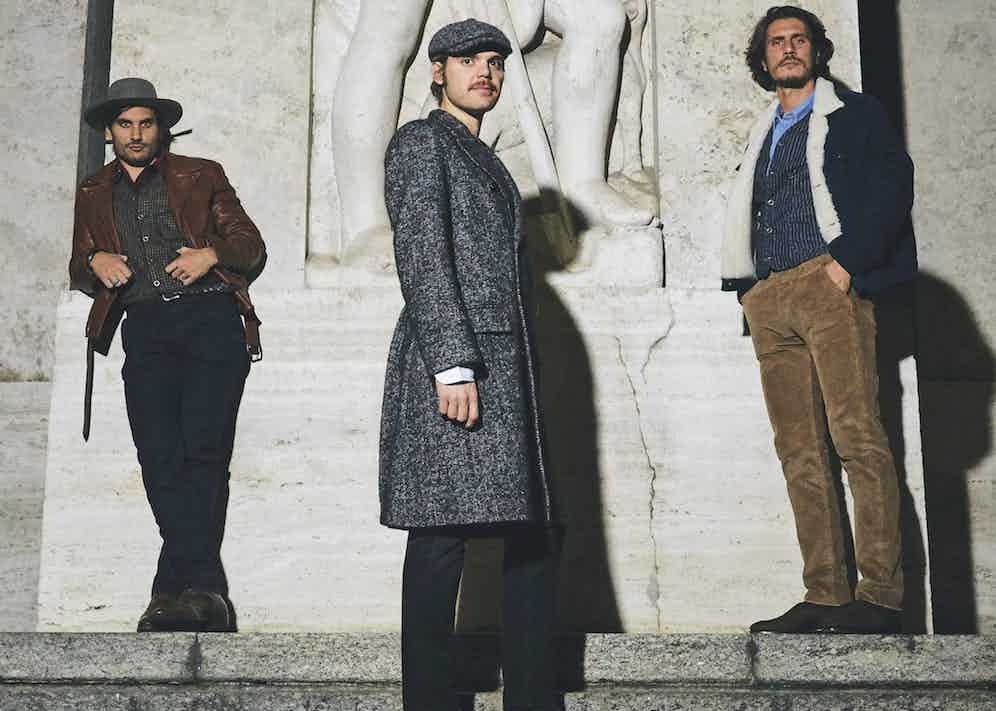 There is a time-honoured adage — indeed, one of the oldest in the English language, dating back to the mid-16th century — that insists you can’t teach an ageing canine neoteric methodologies. Try telling that, though, to the trio of young, dashing entrepreneurs — brothers Sergio and Sebastiano Guardì, plus Alessandro Pagliacci — who in 2011 founded Barbanera as a start-up (and upstart) shoemaker rooted in Italian artisanal tradition that is open to external influences and possesses a healthy soupçon of youthful ‘attitude’. Since then Barbanera have been plundering the cultural high seas for inspiration (‘Barbanera’ is Italian for ‘blackbeard’, aptly enough), and not always sartorial ones — the brothers’ father and his love of art and antiques is one; rock and psychedelic music is another (Sergio has trodden the rock ’n’ roll stage boards in the past).

Now, to the delight of sartorial connoisseurs who value the postmodern-slash-traditional dichotomy that has become the Barbanera USP, the brand has broadened its repertoire into ready-to-wear garments, as showcased by the triumvirate themselves on these pages. “We started with shoes, and they’re our first ‘crush’, but we’re not just shoemakers,” Sergio tells The Rake. “From the beginning the idea was to create a brand and express our idea of style, our unique concept and mood, with 360-degree vision and in a way that bypasses the usual distinction between classic menswear and fashion. Also, we realised our customers and others not only appreciated our shoes but our broader style, and we started to get requests, so this step was a natural progression. The same core philosophies — 100 per cent Made in Italy, high quality, no compromise, infused with our influences and inspirations — apply in the ready-to-wear clothing as in the shoes. Sometimes we joke about the fact that we are a mixture of classic and badass, or ‘badassic’!” 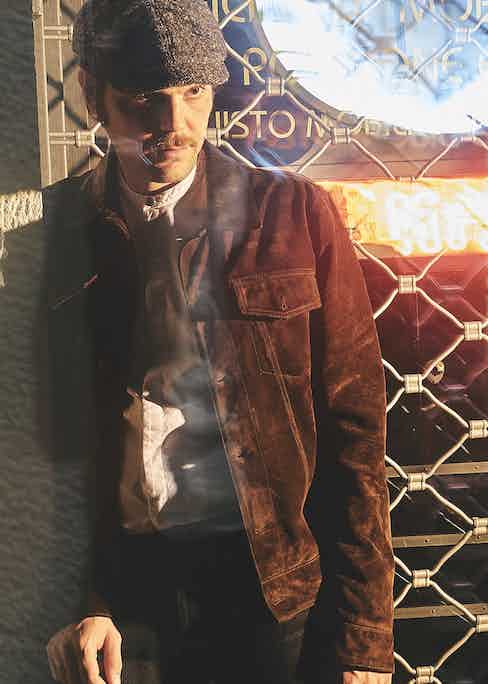 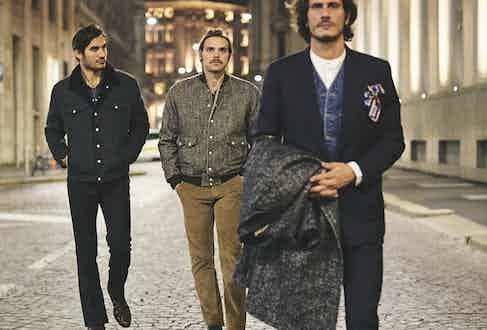 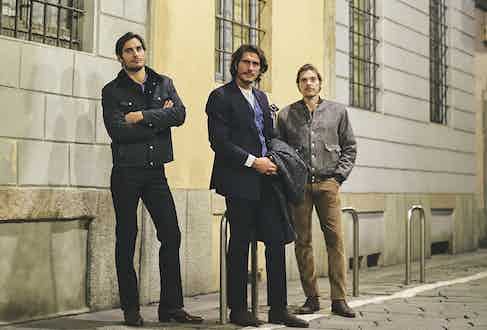 Indeed, as this new chapter begins, the brand’s diverse cultural inspirations remain, Sergio says, fundamental to the company’s ethos. “Our motto is ‘truth and culture’, and I will never get tired of saying that style is not what you own, it is what you know. You are not what you wear, you wear what you are. The same is true for designing, I think. I see so many people thinking some clothes alone can make them be what they are not. Style is just about being really confident in what you are wearing. I’m designing for the immaculate gentleman as well as the infamous bastard.”

As readers will deduce from the photographs here, much of the Barbanera apparel has an American flavour to it, though Italian authenticity is paramount. “I don’t want to design for or run an American workwear replica brand, because it wouldn’t be genuine,” Sergio says. “It’s not us. We want to offer our unique vision to the world — so, for example, our western-style shirts and trucker jackets are different: they have a western yoke and design, western pockets, pearl snaps, but the cut is more ‘sartorial’, modern. We mix an amazing Italian corduroy or Japanese fabrics with metal concho buttons hand-made in Texas. The trucker jacket has a precious, genuine shearling lining, as does the Muddy bomber jacket in Vitale Barberis Canonico herringbone wool. To make the Trinity trousers we picked up a precious Vitale Barberis Canonico pinstriped wool, then washed, felted and finished it as if it were denim, to get a proper ‘gypsy’ feel while retaining a sartorially minded attitude. These kind of things make us different.”

Among the other gems here are the brand’s Harlock double-breasted military coat (“Our take on the navy military coat — it has structure, but, being a softer wool, it’s easy to wear over jackets and blazers”) and the Jesse vest (“There are three versions — one in VBC wool, one in Japanese pinstriped denim, and one in a washed denim with a heavy cotton lining”). Describing the Barbanera Man, Sergio says: “He’s the kind of guy who likes being versatile and open, being able to play with the idea of style but always keeping in mind the importance of being authentic. He is someone who loves traditions and traditional garments but thinks, Why should I buy a vintage replica if I can buy a real vintage one?” Yet despite these DNA strands running through the increasing numbers of brand superfans, Barbanera have always aimed for an eclectic client base, conducive to which has been their identity as a relatively new venture. Sergio says: “We always ask ourselves, What do we have that a 100-year-old business doesn’t have? The answer is creative freedom. We are free, when it comes to shoes, to make the most classic elegant Oxford or the most badass rock ’n’ roll boot under the same brand, with the same high quality. Rock ’n’ roll is about attitude, not about studs or tying bandanas to boots.” 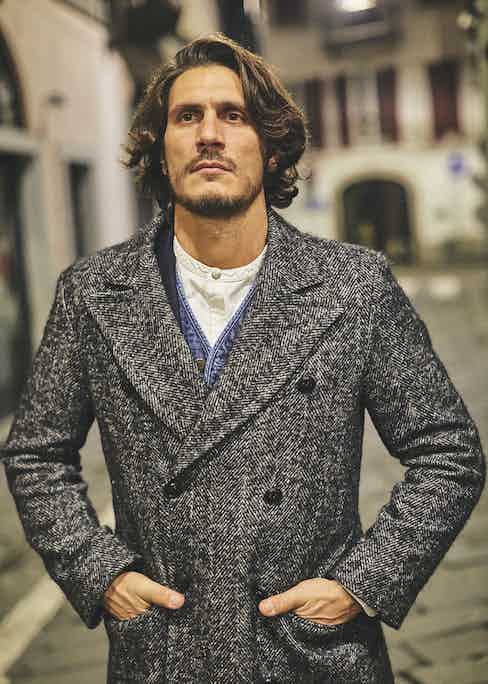 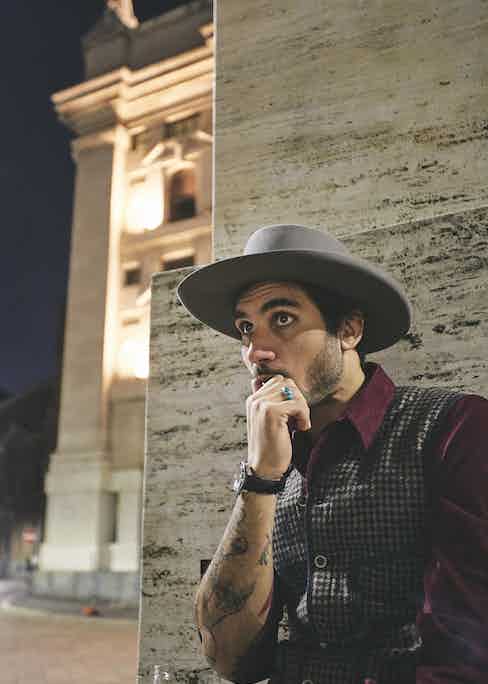 Their creative philosophy, then, might be described as ‘untraditionally traditional’. But make no mistake, the trio has profound and unerring respect for the older brands, and they emulate their approach to craftsmanship in their Tuscany workshop. If you want the best possible quality and durability, their ethos goes, who are they to question basic methods honed over millennia? Though of course, when you stand on the shoulders of giants, you get to survey the landscape. “Maybe we do more research about materials, leathers and the way we finish them,” says Sergio. “In this respect, American and English makers are very good — they have a great culture in terms of washing and finishing leather or fabrics.”

So what, for Sergio, is the number one cardinal sin when it comes to selecting the ingredients of a killer ensemble? It’s a perennial question, after all, even for sartorially inclined men. “Asking for, and following, suggestions from his wife or girlfriend!” Sergio says. His quip refers not to women’s tastes but external input in general. “We should be a bit braver,” he says. “Buying something that can fit your personality, in a metaphorical way, is more important than them fitting your body.”

Asked how he’d wish for Barbanera to be looked upon a century into the future, by which time we predict its ‘founded in 2011’ stamp will mark it down as a generations-old house, Sergio is emphatic: “We’d like to be thought of as a brand that was able to keep its DNA over time, without betraying its values, and found its own niche, and also spoke a language that is easy to understand for everyone, and is timeless. For me personally, what about being the first creative director who retired to live in his own ranch in the countryside?”