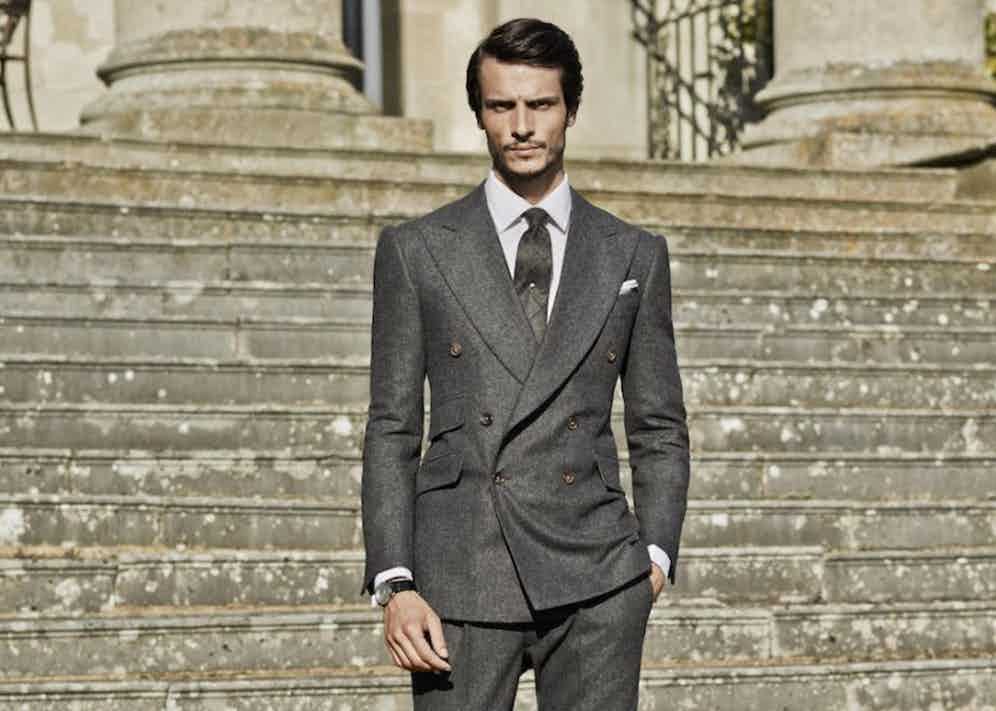 The shorter coat length, high lapel gorge and higher-than-normal breast and hip pockets on this Cifonelli suit all work together to create an impressive sense of length and proportion.

“It is quite simply, the deadliest blow in all of martial arts. He hits you with his fingertips at five different pressure points on your body, and then lets you walk away. But once you've taken five steps your heart explodes inside your body and you fall to the floor, dead, says Bill in the macabrely hilarious Quentin Tarantino masterpiece, Kill Bill, of the mythical Five Point Palm Exploding Heart Technique."

Similarly, there is one garment that is irrefutably the most rarified, the sole preserve of true seventh-dan black belt practitioners that is the ultimate style weapon in the game of sartorial one-upmanship. That garment is the 6x1 double-breasted jacket (or button-one-show-three in some traditionalist circles). And the men who wielded it with ultimate confidence and bravado, such as the Duke of Windsor, Douglas Fairbanks Jr, Gianni Agnelli, Fred Astaire and Ralph Lauren occupy the most iconic roles in the enduring drama of classic elegance. Amusingly while the double-breasted jacket is today perceived to be highly traditionalist, a century ago it was the hallmark of the sartorial rebel. And the 6x1 iteration was the most wildly deviant, liberatingly comfortable and irrepressibly rakish of them all.

The double-breasted jacket, as explained by Christian Barker in our introduction on this style, was derived from the naval reefer jacket and worn over casual clothes like tennis wear. At the dawn of the 20thcentury as dress codes began to loosen, men began to wear double-breasted jackets as sports, business and even eveningwear as a more casual alternative to the three-piece suit. It was considered particularly audacious in eveningwear as it allowed the wearer to jettison the restrictive waistcoat for a libidinously comfortable style.

In the early part of the century two tailors emerged as the most conspicuous champions of the double-breasted jacket. They plied their craft in two different nations and yet demonstrated a profound spiritual kinship. The first was the brilliant Frederick Scholte, a Dutch tailor based on Savile Row and who became the chief progenitor with Edward VIII in the creation of the British drape. The second was Domenico Caraceni, a genius of the shears famously capable of perfectly sizing up a client with just his eyes. He famously dissected the Henry Poole suits owned by music teacher to the English Court, Francesco Tosti, and married their style with the softness and lightness of his native Abruzzo tailoring to create the very foundation of Roman and Milanese suiting. Caraceni’s tailoring was made distinct from the more rustic style of Neapolitan tailoring by heroic shoulders, a clean chest, a nipped waist, wide lapels, a flared skirt and somewhat short jackets. The larger-than-life silhouette of the Caraceni suit drew Italian nobility and Hollywood glitterati, notably Douglas Fairbanks Sr and Jr to his door. 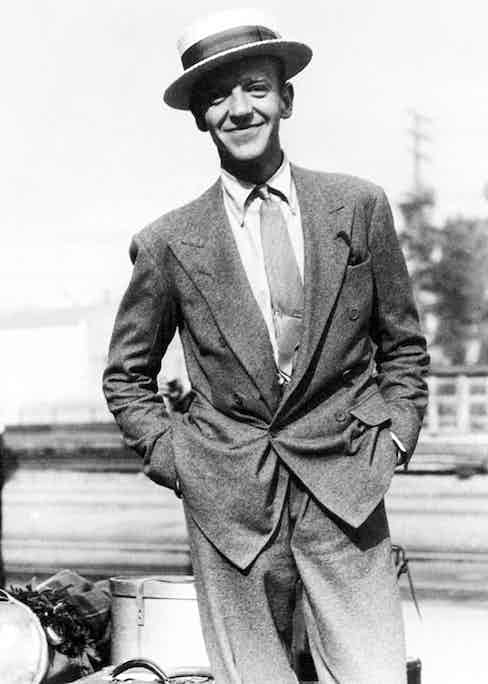 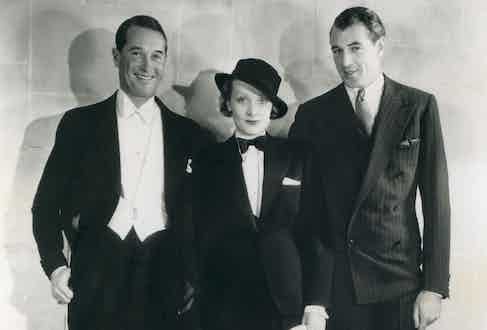 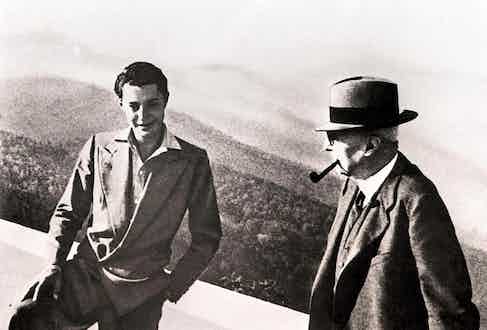 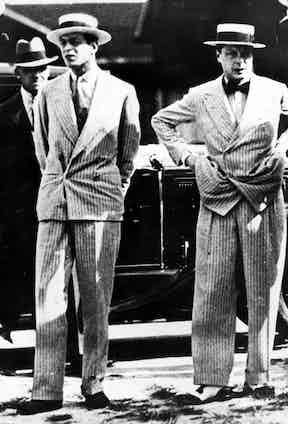 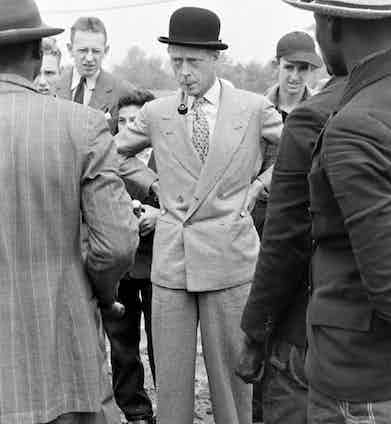 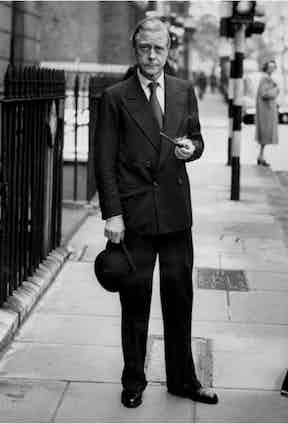 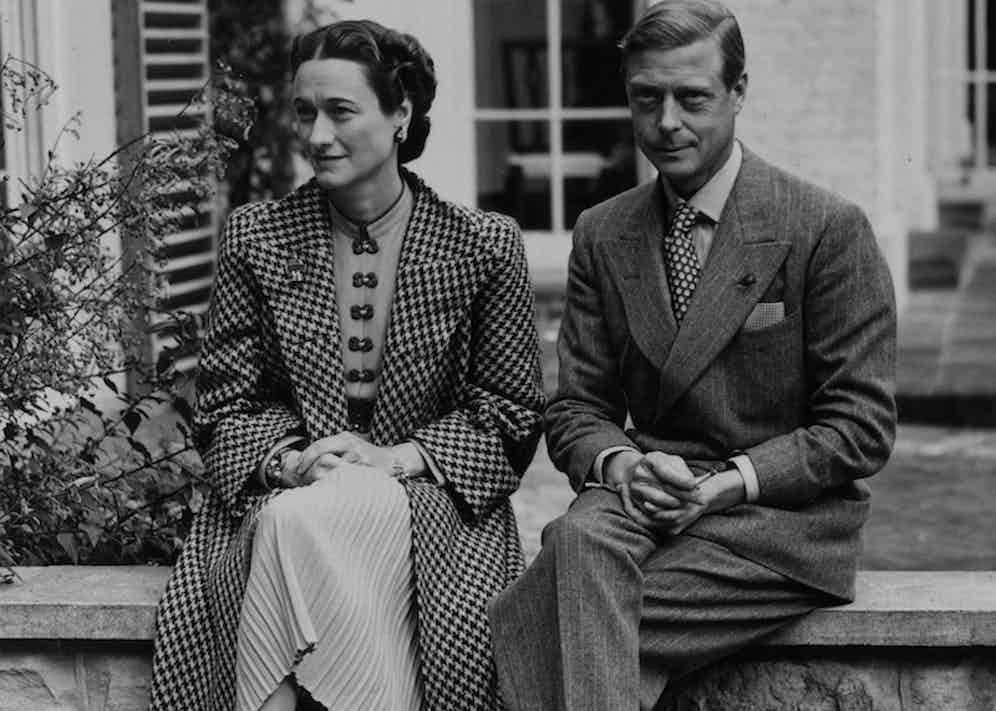 Initially, double-breasted jackets were all of the 6x2 variety, meaning that they displayed six buttons and were fastened with two buttons, one just above the natural waist and one below. To this day this still represents the vast majority of double-breasted jackets and is a more formal style worn with great aplomb, in particular by the likes of Prince Charles and Prince Michael of Kent.

However, between the two World Wars, during a period of renewed optimism, less restrictive social mores, sexual liberation and perennial celebration, two great dandies began to popularise a new way of wearing the double-breasted jacket. It is conceivable that Edward VIII was inspired by his brother the Duke of Kent and his penchant for wearing his 6x2 jackets fastened on the bottom button with a care-free, nonchalant attitude. Soon he began to wear as his signature style jackets in both 6x1 and 4x1 formats, fastened exclusively on the bottom button.

The result was a longer lapel line that served to elongate the somewhat diminutive monarch’s frame, while the far more open front quarters of the jacket allowed for greater freedom of movement. But this new style was underscored by his and Scholte’s complete rethinking of the balance of the double-breasted jacket. To begin with they moved the buttons up so that the lowest button was in horizontal alignment with the hip pockets, which were also placed slightly higher on the coat so that the balance of the coat wasn’t thrown off. Had the lapel simply rolled to the bottom button in a traditional 6x2 jacket, the result would have opened the front quarter, revealing too much unsightly shirt and tie while creating a sense that the skirt was truncated. By having a higher buttoning point he could also sit without his tie coming out. At the same time, the jacket was also cut slightly shorter and with the waist suppressed just above the natural waistline, which created an appealing V-shape before flaring into a well-balanced skirt. 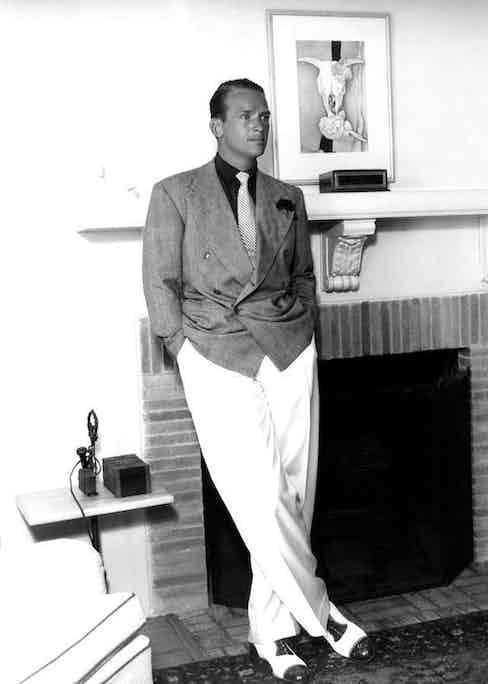 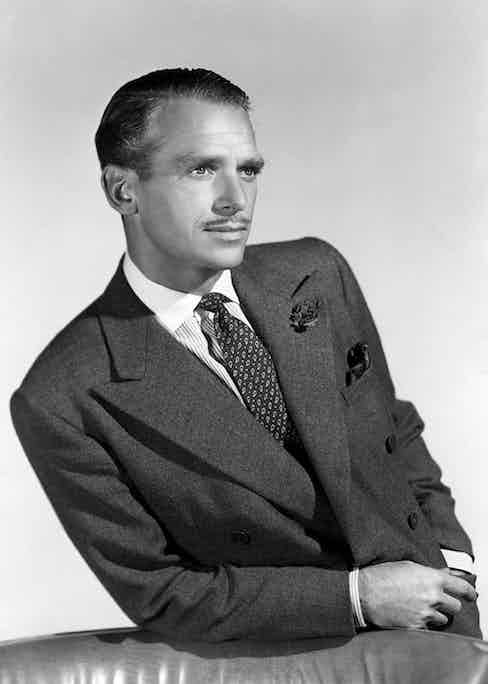 Caraceni’s 6x1 jacket was popularized by Douglas Fairbanks Jr. In comparison, his father was a devotee of the more traditional 6x2 style, which oozed a seductive, roguish charm. Though Caraceni’s 6x1 coats evince similar proportions as Scholte’s, such as the lower button aligning with the hip pocket, Fairbanks Jr’s coats had one highly appealing feature in that they could be buttoned to either the middle button or to the lower button in a style the Italian tailor called “doppiopetto transformible”, or transformable double-breast.

With this style, still popular by tailors such as Terry Haste in London or Rubinacci in Naples, the lapel of the jacket is super soft and is not pressed in a way that compels it to either button. Instead, it gently rolls to the bottom button and traditionally the middle buttonhole is finished on the reverse side so that it becomes decorative as with the top button on a 3x2 jacket. In order for the lapel to roll to either button it also needs to be relatively straight as opposed to heart shaped or featuring too much belly.

Ralph Lauren once met Fairbanks Jr outside of Brooks Brothers, looked at his double-breasted jacket and instantly knew that this would become his signature style. His jackets, made for many years by tailor Douglas Hayward and today by Lorenzo Cifonelli, are interesting in that they feature many of the details of a transformable double-breasted jacket - including the reverse finished buttonhole - but fasten only at the bottom button. This allows Lauren to use a more V-shaped button stance on his jacket as the middle button no longer needs to reach the purely decorative buttonhole. Lorenzo Cifonelli, co-owner of Paris’ halcyon tailors, similarly prefers a 6x1 that does not allow for buttoning except at the bottom button. Because the lapel doesn’t need to roll, he is able to design it with a beautiful heart-shape evincing a full belly and is one of the most beautiful 6x1 jackets around.

The end result of the 6x1 is the creation of jacket that is far less stiff and formal, exuding an irrepressible sense of playboy elan, a touch louche yet always charming. Indeed, the majority of men wearing this style opt to keep the back blade of their jacket unfastened from the jigger button allowing it to collapse in a cascade of soft, rippling cloth. Two men, Fred Astaire and Gianni Agnelli were able to pull off this look with particular sartorial eloquence, with Astaire sometimes going so far as to pull the back blade aside for optimum unrestricted mobility. It can be perceived as a somewhat defiant, even rebellious practice but at the same time the 6x1 worn in this way allowed men like Edward VIII, Fairbanks Jr, Astaire, Agnelli and Lauren to express their stylistic individualism. The 6x1 disappeared for most of the second half of the 20thcentury. The style was briefly popularized in the 1980s by designer Giorgio Armani and others. But after an initially elegant debut it soon lapsed into caricature with the addition of linebacker shoulder pads and Botero like oversized proportions. But today with that era long in the rear-view, we are able to once again rediscover the extraordinary merits of the most expert level double-breasted jacket configuration in Christendom. 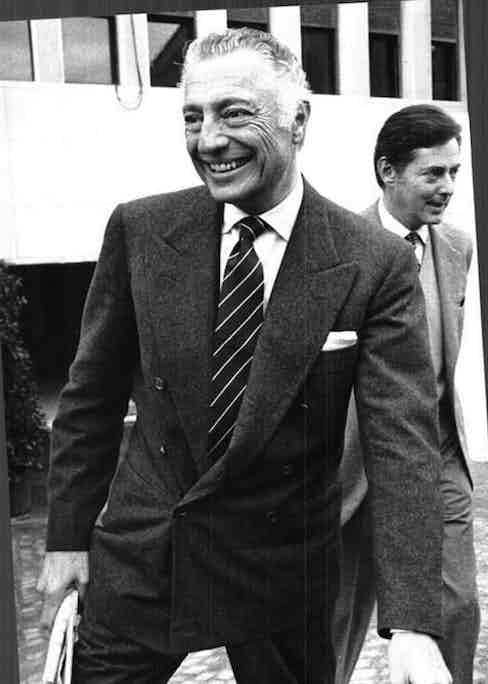 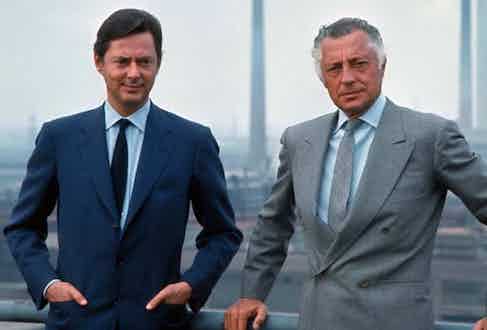 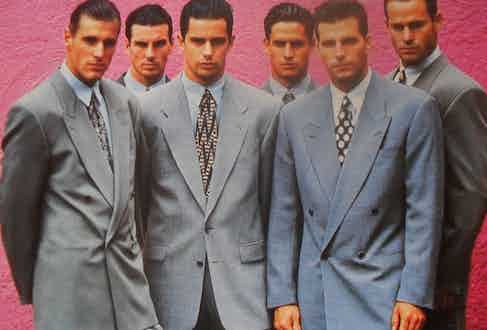 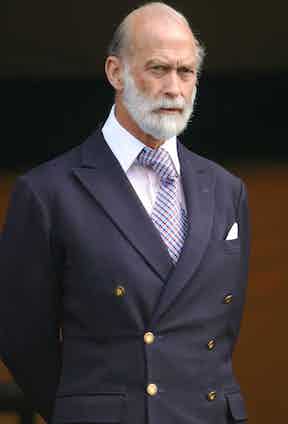 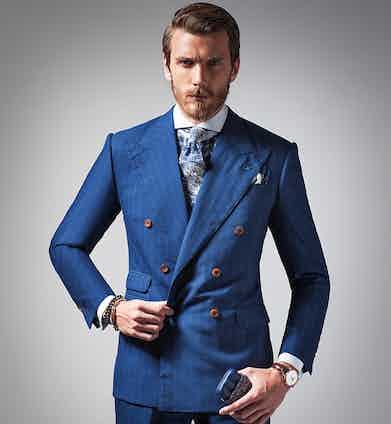 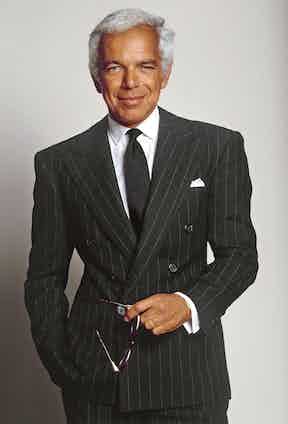 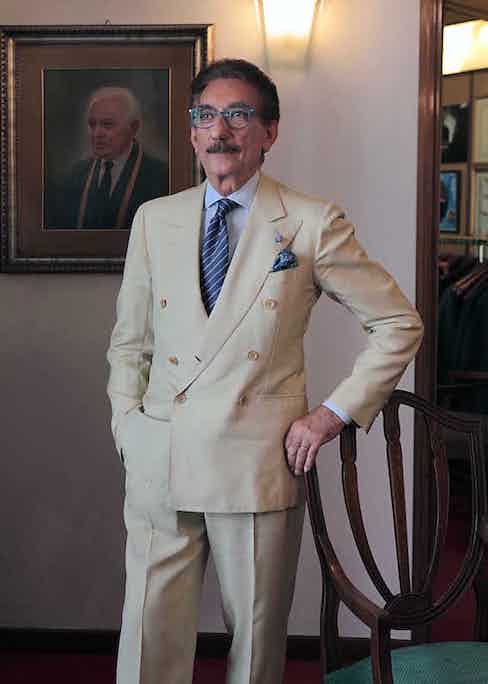 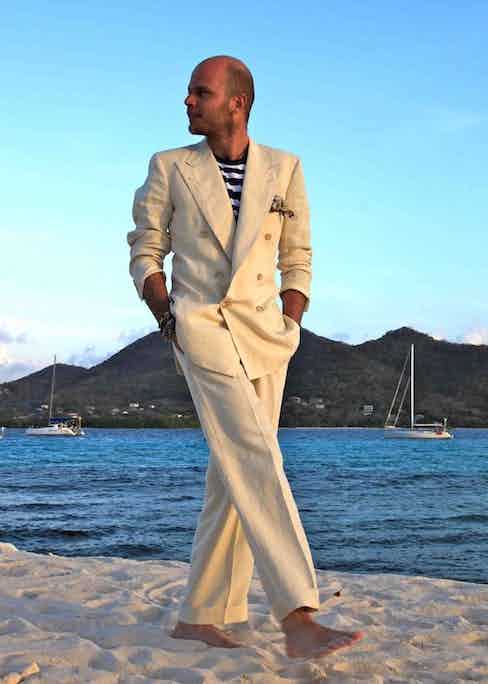