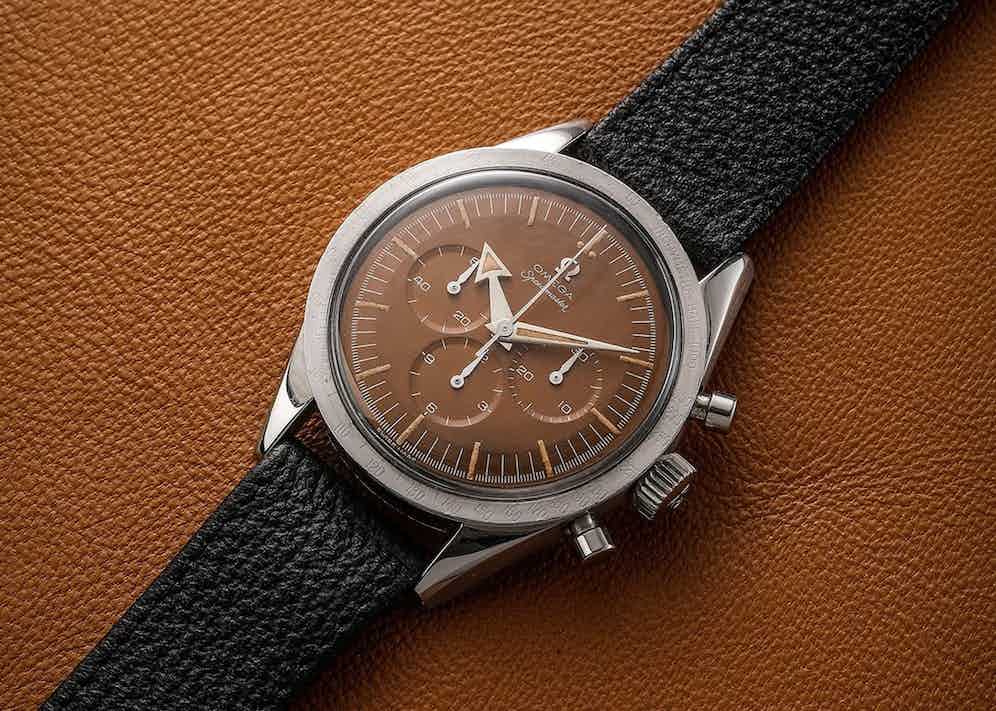 A few weeks ago something amazing happened in Geneva. A 1957 reference 2915-1 Omega Speedmaster was sold by Phillips for an incredible sum; a cool 3.1 million Swiss Francs, making it far and away the most expensive Speedmaster ever sold at auction. What makes this result even more remarkable is that it hadn’t been to space. After all, the story of manned space flight is the underlying beat behind the story of the Speedy, a tale which elevates this manually wound chronograph into the realm of ‘icon’. And while the history of the Speedmaster is long and varied, its fame rests on a single pivotal moment in time, when it was worn on the wrists of the Apollo 11 astronauts and became, according to that famous caseback inscription; the first watch worn on the moon, or, more popularly, The Moonwatch. 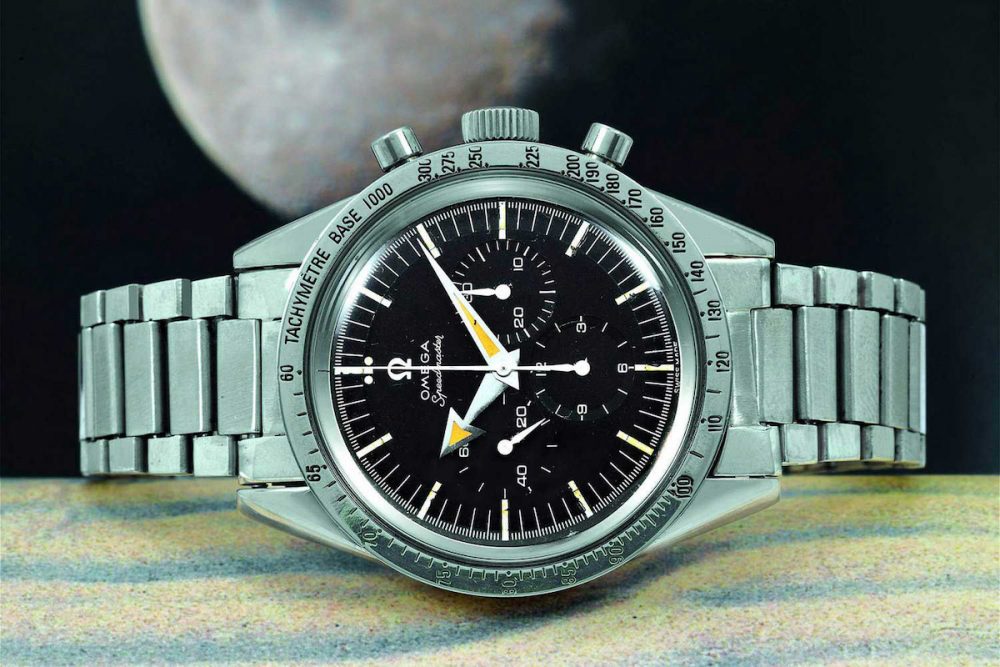 While it was the moon that made the watch famous, the Speedmaster story predates its journey into space by a good few years. Not that it was initially intended for such extra-atmosphere explorations. In fact, Omega released the first generation Speedmaster — reference CK2915 — in 1957, alongside the brand’s other two distinguished tool watches, the Seamaster 300 and the Railmaster. The earliest incarnations of the Speedy (as it’s affectionately referred to) was intended as a wrist-computer, where the stop-watch functionality combined with the tachymeter scale meant that the Speedmaster was designed as a purposeful tool, built with precision in mind, be that on the track, in the lab or the cockpit. 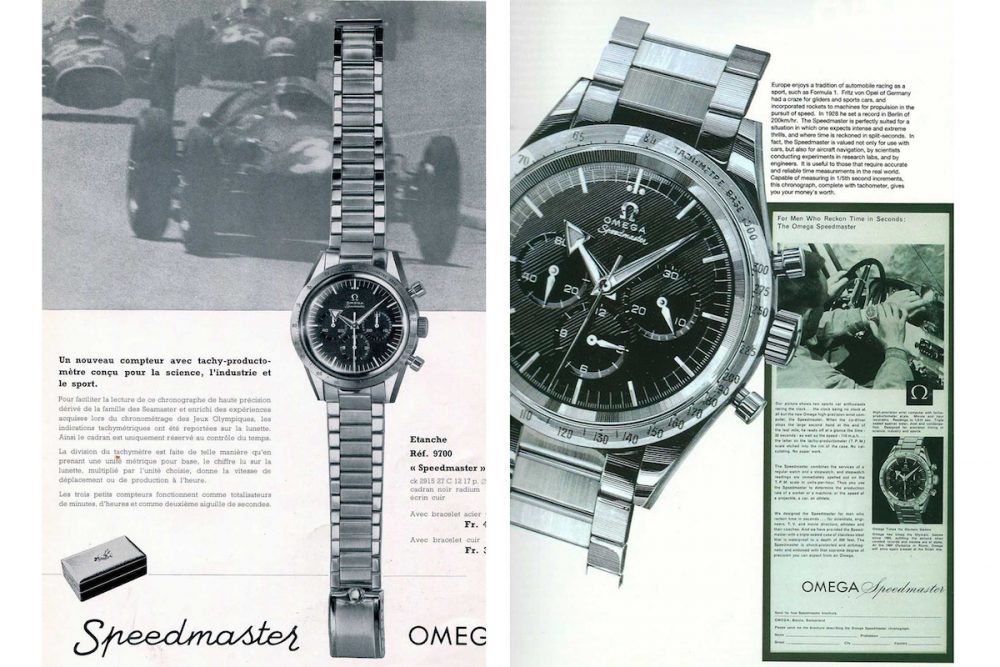 The Speedmaster in Space 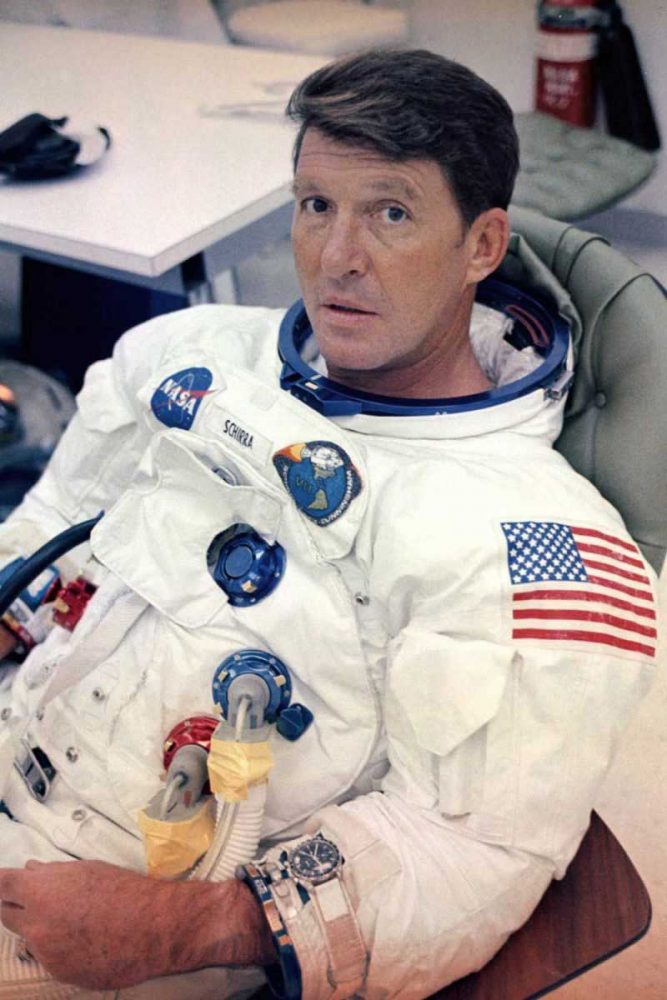 While the Speedmaster strapped onto Buzz Aldrin’s wrist on the 24th of July, 1969 is the watch that takes the prize as THE first watch on the moon (that watch, by the way is unaccounted for, as per protocol, Aldrin sent it to the Smithsonian Institution – but it never arrived), it’s not the first time the Omega Speedmaster has made it to space. That honour goes to a watch that astronaut Wally Schirra purchased with his own money, and wore during the Mercury-Atlas 8 mission which saw him orbit the earth six times in the Sigma 7 spacecraft. The reference Schirra wore was the CK2998, produced in eight variants from 1959 through to 1963, what is most important to note about this reference is the transition to a black aluminium bezel insert and narrower ‘Alpha’ handset. 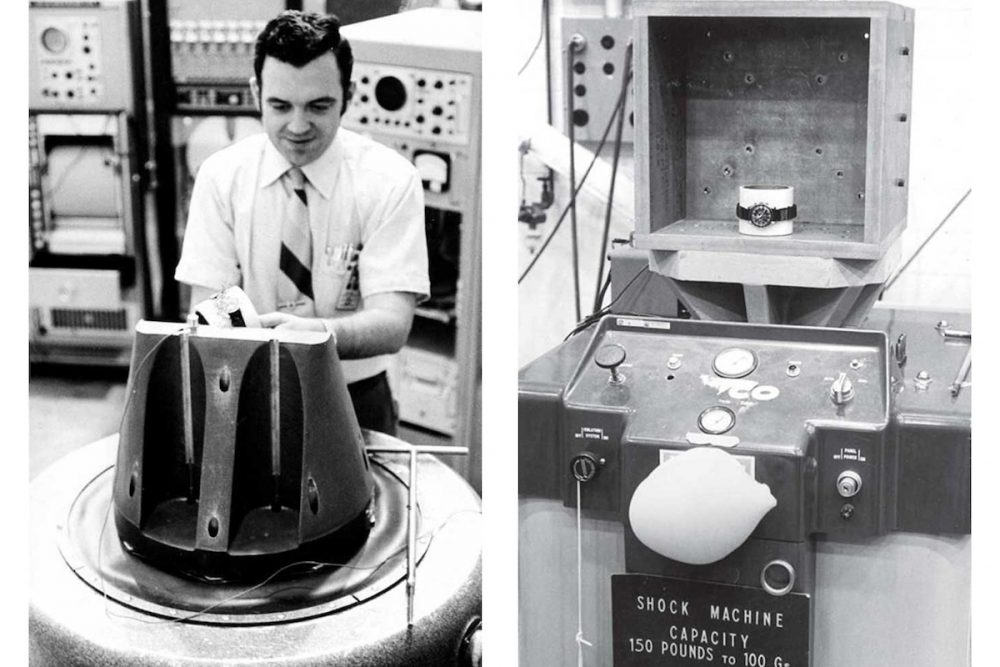 While privately purchased watches like Schirra’s were the first Speedmasters in space, it wasn’t until 1964 that NASA saw the need for a space-ready chronograph. And so, NASA sent out requests to around 10 brands to supply watches for testing. Only a few brands responded, and in the end received NASA chronographs from Omega, Longines and Rolex. These watches were submitted to 11 different tests, including tests at extreme temperatures, pressure, humidity, tests in pure oxygen environments, shock, acceleration, vibration and a range of others simulating the harsh conditions expected in space. The watch that passed all these tests, and was qualified by NASA was the Omega Speedmaster 105.003, a third generation watch with white baton hands. 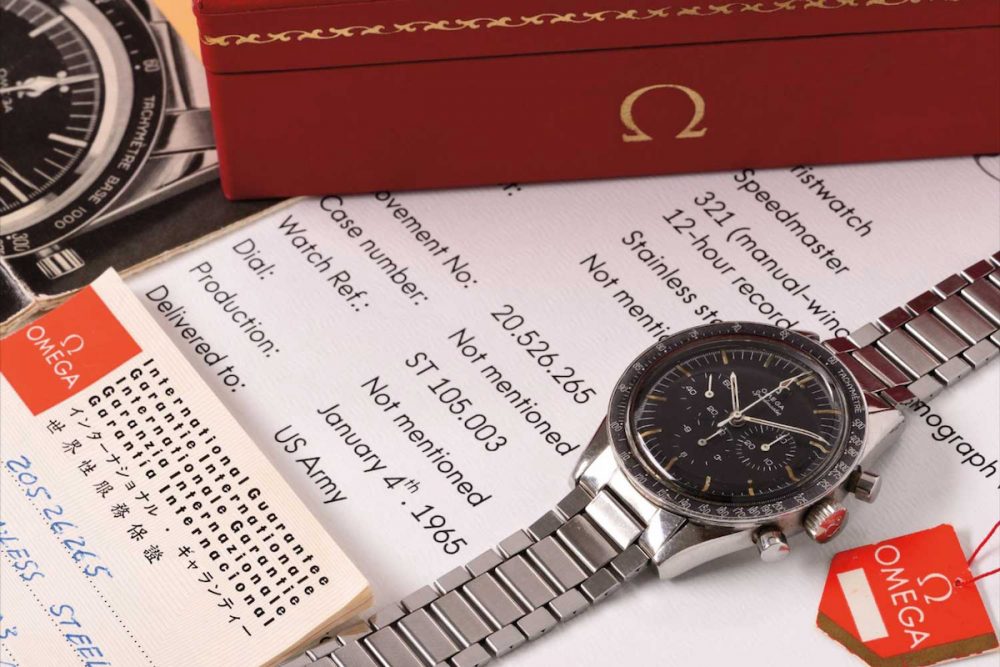 First Watch on the Moon 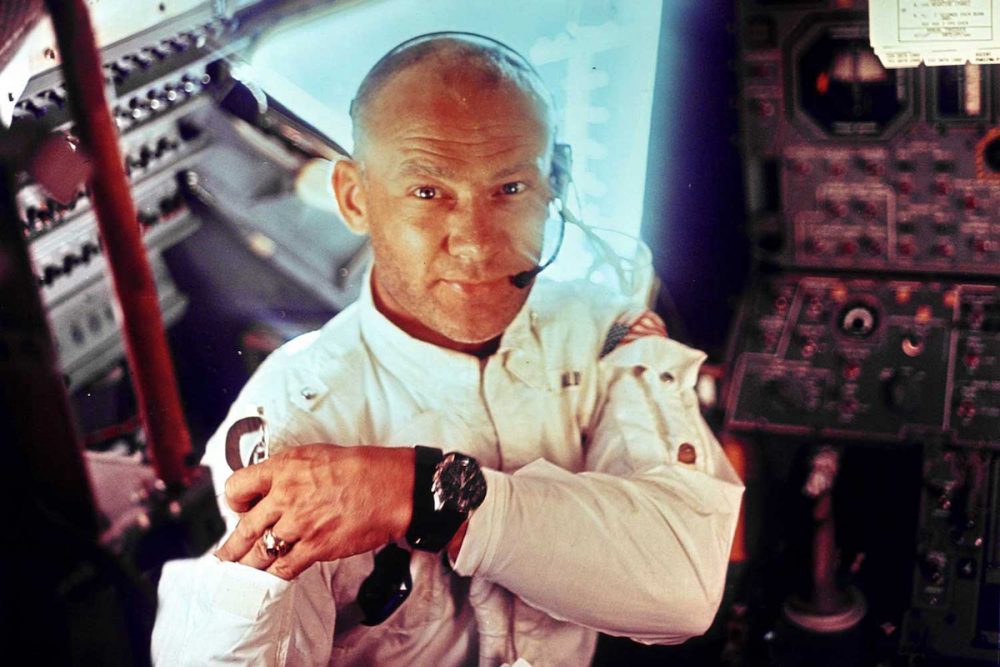 Finally, five years after this certification, Buzz Aldrin stepped out of the Apollo 11’s Lunar Module with a Speedmaster reference 105.012, and cemented the Speedmaster’s status as the First Watch on The Moon. Shortly after Apollo 11 landed back on terra firma Omega (along with the rest of the world) celebrated the achievement with the first limited edition Speedmaster, a solid gold model, reference BA145.022-69, of which the first 28 were presented to President Nixon, Vice-President Agnew and all currently serving Astronauts. Later Astronauts were also presented with this model, and a number were produced up until 1973 — in total 1014 were made. It is this model that Omega chose to re-create to celebrate the 50th anniversary of the moon landing with the 2019 Speedmaster Apollo XI 50th Anniversary edition, which saw the introduction of Moonshine Gold. 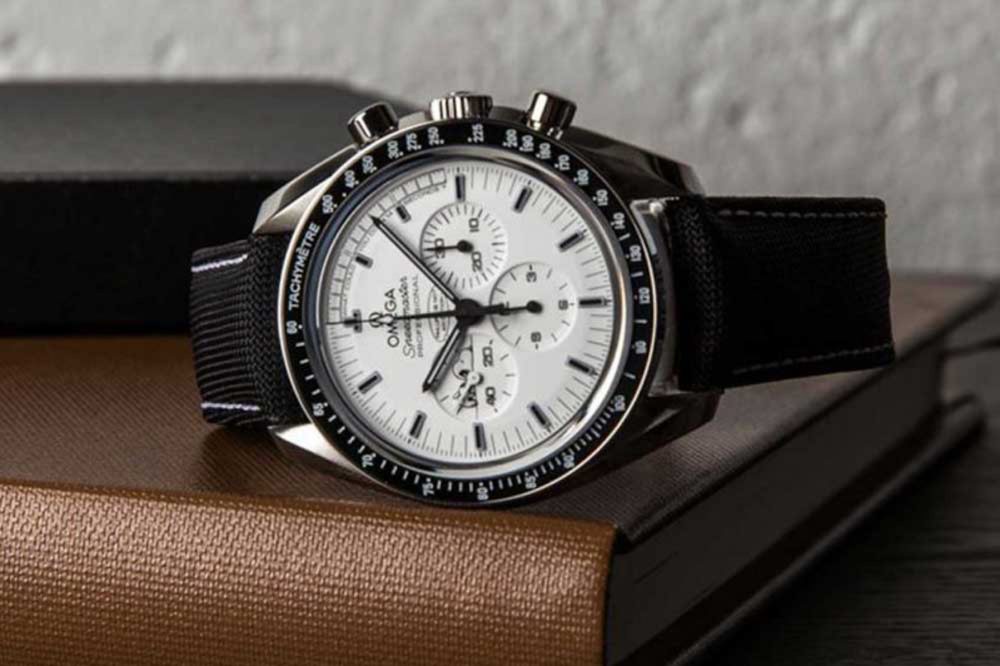 The story of the Speedmaster in Space doesn’t end with Apollo 11, as the watch is a functional piece of kit to this very day. But one famous incident deserves special mention: the role of the Speedmaster in the dramatic Apollo 13 mission. After an on-board explosion 200,000 miles from earth, Apollo 13 was stranded in space — and, after hasty jury-rigged repairs completed, a Speedmaster was used to time the crucial 14-second rocket burn that ensured safe re-entry into earth’s atmosphere. This achievement earned the Speedmaster a ‘Snoopy’ award (Charles Schulz’s cartoon dog being something of an unofficial mascot for the Apollo missions), given to outstanding contributions from personnel and contractors. It’s for this reason that Omega has produced two ‘Snoopy’ Speedmasters, one in 2003 and one more recently in 2015.

Between the years of 1957 and 1969, the case and face of the Speedmaster underwent some evolution — bezels and hands changed, cases and pushers became more robust. Throughout all that time, the famous beating heart of the Speedmaster was the calibre 321. First developed by Omega and movement-maker Lemania in 1946, the calibre 321 is a manually-wound column-wheel chronograph that beats at 18000 vph, with 17 jewels and some 44 hours of power reserve. It is a movement many regard as offering an epitome of both function and beauty, though certainly, the allure of the moon plays no small part in its legend. The 321 was replaced in 1969 by the less-expensive 861 movement, which utilised a cam controlled chronograph. The 861 remained the Speedmaster staple until 1996 saw the introduction of the 1861, and later, the more prettily finished 1863, both of which are still used by Omega today. 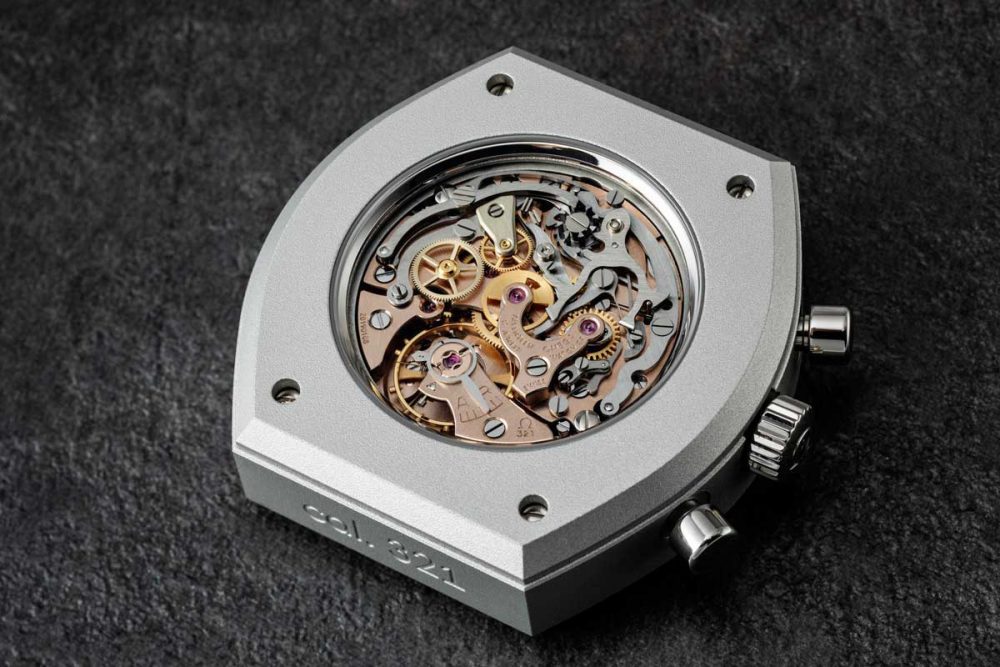 The 321 story isn’t quite over, as Omega announced that the classic chronograph was back — painstakingly re-engineered from the Last Watch on the Moon (Gene Cernan’s Speedmaster). This hand-assembled, modern-recreation of the famous calibre is currently available in a 42mm platinum model or the 39.7mm steel ‘Ed White’ model, both in regular, though limited, production.

Between 1970 and the introduction of Co-Axial movements into the collection in 2005, the Speedmaster saw numerous other interesting additions and oddities, from the electronic F300 powered Speedsonic, to a quartz digital Speedmaster, and eventually to the X-33 from 1998, Omega has never been afraid to implement new technology into its iconic chronograph. From seemingly humble origins back in 1957, the Omega Speedmaster has been on quite a journey, and it isn’t over yet.