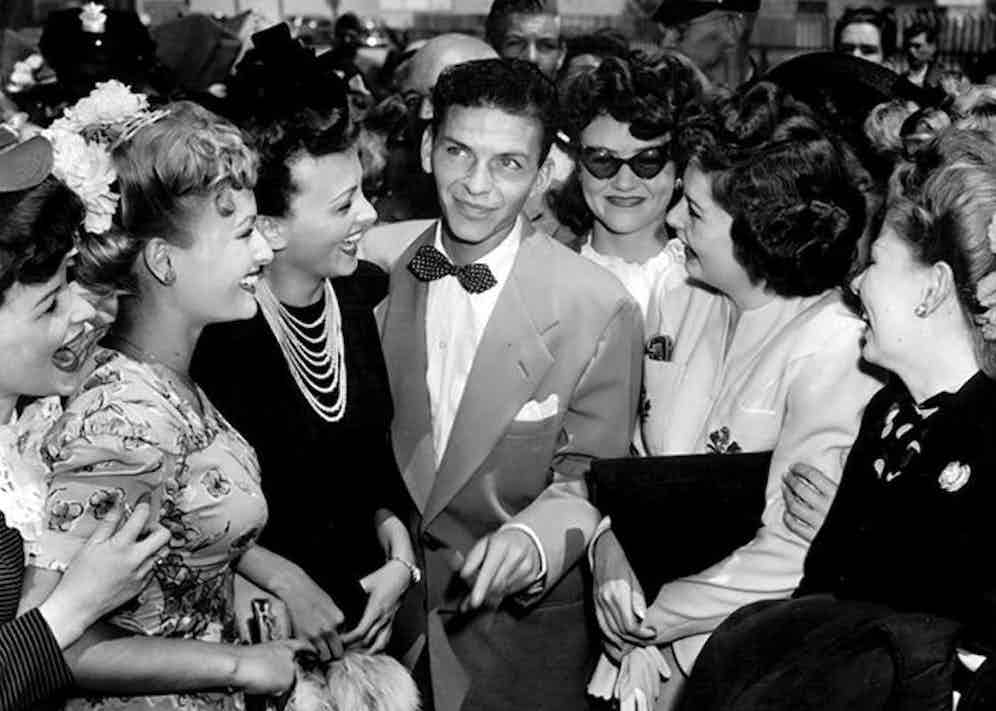 A young Frank Sinatra surrounded by female admirers at a party, circa 1942.

It’s been almost 20 years since he died, and a little over a century since he was born. In between, Frank Sinatra not only defined the singer’s art - his interpretation and phrasing remain the benchmark even today - and established the canon of American standards; he also moulded the idea of modern celebrity - his bewitched ‘bobby soxer’ fan-base made him the original teen idol - and shaped a visual style still resonant over half a century on. But that was Sinatra after success. Before anyone lauded him as The Voice, loved him as Ol’ Blue Eyes, or feared him as The Chairman, he was more a symbol of ethnic achievement, precisely because he had risen from prescriptive Italian-American roots - the son of a Sicilian boilermaker and fireman and a domineering woman who, according to one account of events, had the vision to let Francis Albert drop out of high school to pursue his dream of singing.

That was around 1932. Sinatra worked briefly as a newspaper boy, even for a solitary day as a sports reporter - after his mother insisted he step into the still warm shoes of the man, now deceased, who had until the day before filled that post. Then he started singing in clubs and taverns. By 1939 Sinatra had made his first recording. He’d come a long way quickly, given that his earliest experience of singing was for tips, sometimes playing the ukulele his uncle had given him. That was when he wasn’t dodging fights. A rowdy teenager, Sinatra was also an enthusiastic boxer, a necessary quality growing up in Hoboken, New York, in the inter-war years. He once claimed to carry a lead pipe with him, that he lived, as he put it, “in a plenty tough neighbourhood” - fuelling a childhood rage that would, egged on by alcohol, shape a notorious adult temper that often turned violent and bullying.

But the scar Sinatra bore from the corner of his mouth to his jawline - and which meant he preferred to be photographed from his right - he actually received not in a punch-up but during his birth (he was assumed to be stillborn until a friend of his mother ran his body under the cold tap and he spluttered into life). Other childhood scars were the product of a mastoid operation and severe teenage acne, both of which left his confidence in tatters and his mental state uneasy: Sinatra was a compulsive washer and used Max Factor Pan-Cake to hide what he considered disfigurements. 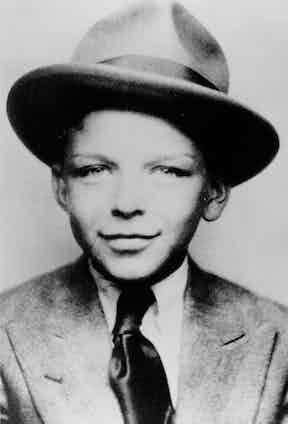 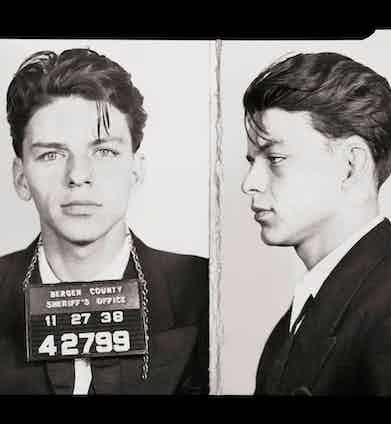 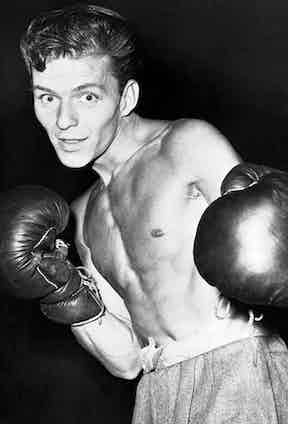 Yet Sinatra’s was not exactly the story of escape from abject poverty. There’s no rags to artfully-tilted trilby tale here. And contemporaries have claimed that many of the stories of some abject childhood are products more of myth-making. Relative to the other kids in Hoboken, Sinatra’s family was comfortable. His mother made sure her only child was always well-dressed - for which other kids mockingly changed his nickname from ‘Scarface’ to ‘Slacksey’. Sinatra had his own bedroom and, a luxury for the time, his own radio. He even had a car, a practical advantage that helped the wannabe singer get his first professional gig: it ensured that a local trio, the Three Flashes, became a quartet, re-named the Hoboken Four.

But Sinatra’s story was, perhaps, an escape from expectations: that he’d find manly, manual work; that, the child of immigrants, he’d keep in his place, psychologically and geographically; that he stay below the pretensions he exhibited as a teen e.g. smoking a pipe and wearing a yachting cap in homage to his hero Bing Crosby. When Sinatra rode a float on a parade through Hoboken in 1947, the locals pelted him with tomatoes for having forgotten his roots. Henceforth he would refer to the area as a sewer. It was, at least, a sewer he got himself out of in spectacular fashion.

Indeed, If Sinatra had his indomitable mother behind him, he also took on some of her single-mindedness. The Hoboken Four may have won ‘Major Bowes Original Amateur Hour’ - America’s ‘X Factor’ of the time - but after just a few months Sinatra left to go it alone. He was signed by bandleader Harry James to sing for $75 a week, then an excellent wage. But when Tommy Dorsey, a much bigger bandleader, came calling, Sinatra left again. And, in turn, he would leave Dorsey, even if that took being held to a contract that gave him 43.3% of the singer’s income for the next decade. He wanted to be the solitary star that badly. And he got it.

Three months later, in December 1942, Sinatra made history at the age of 27 with his solo performance at New York City’s Paramount Theatre. He was billed as an ‘extra added attraction’. Yet within weeks he had signed contracts with Columbia Records, RKO Pictures and with the country’s most popular music radio programme. Two years later, Sinatra returned to the Paramount - and there were 30,000 devotees waiting in Times Square for him... 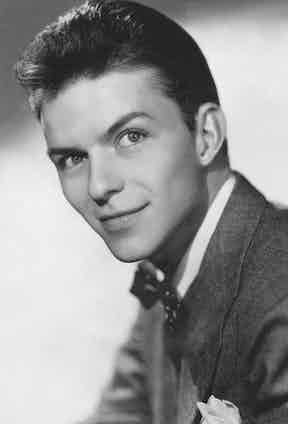 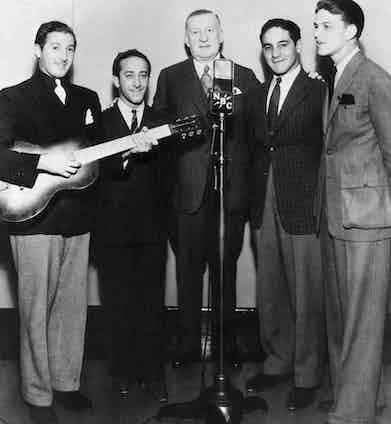 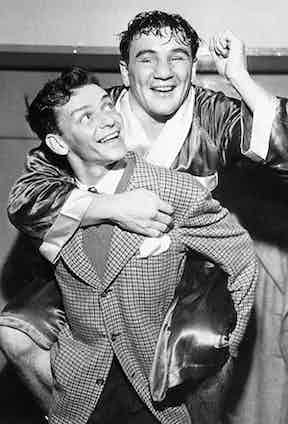 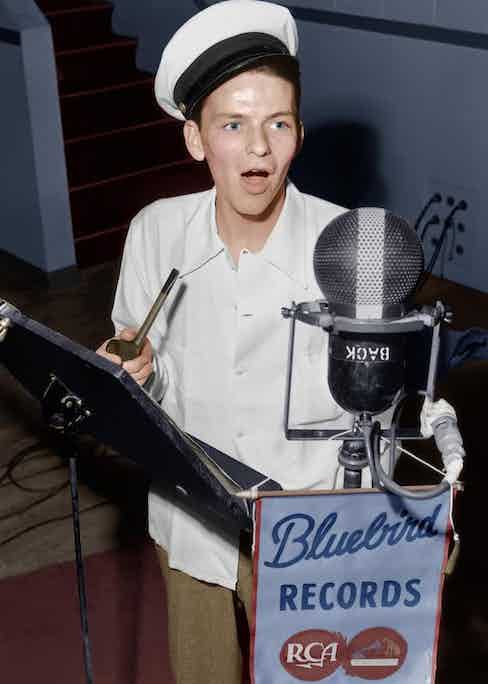 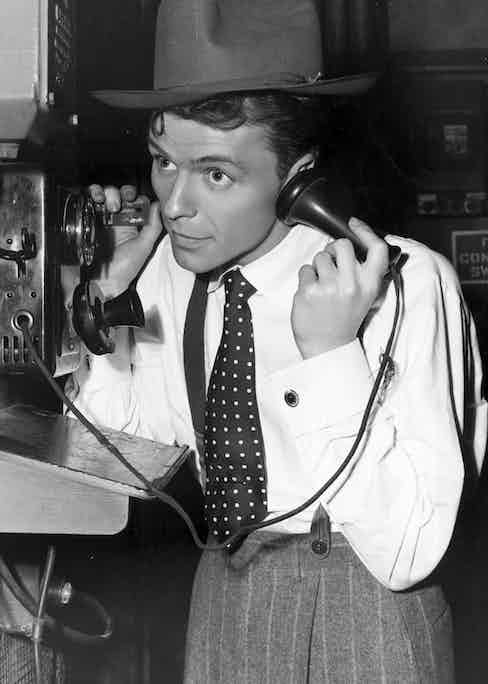 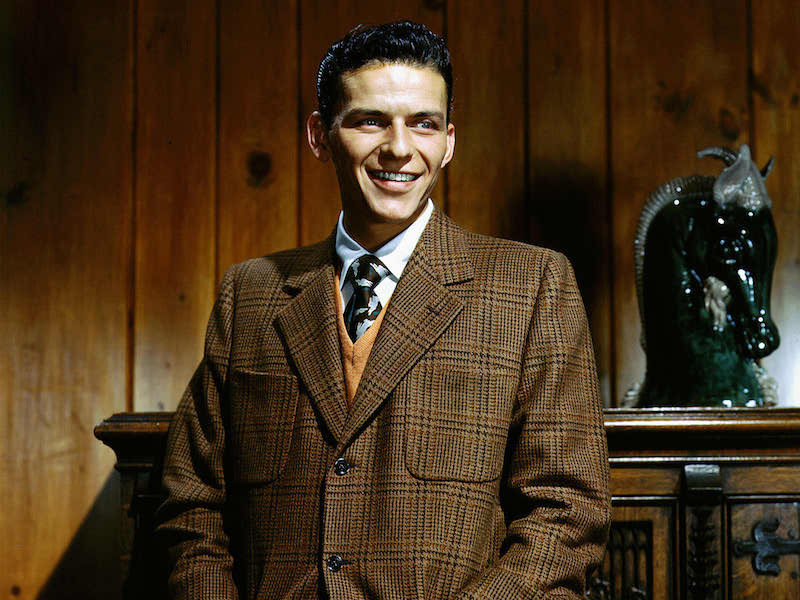