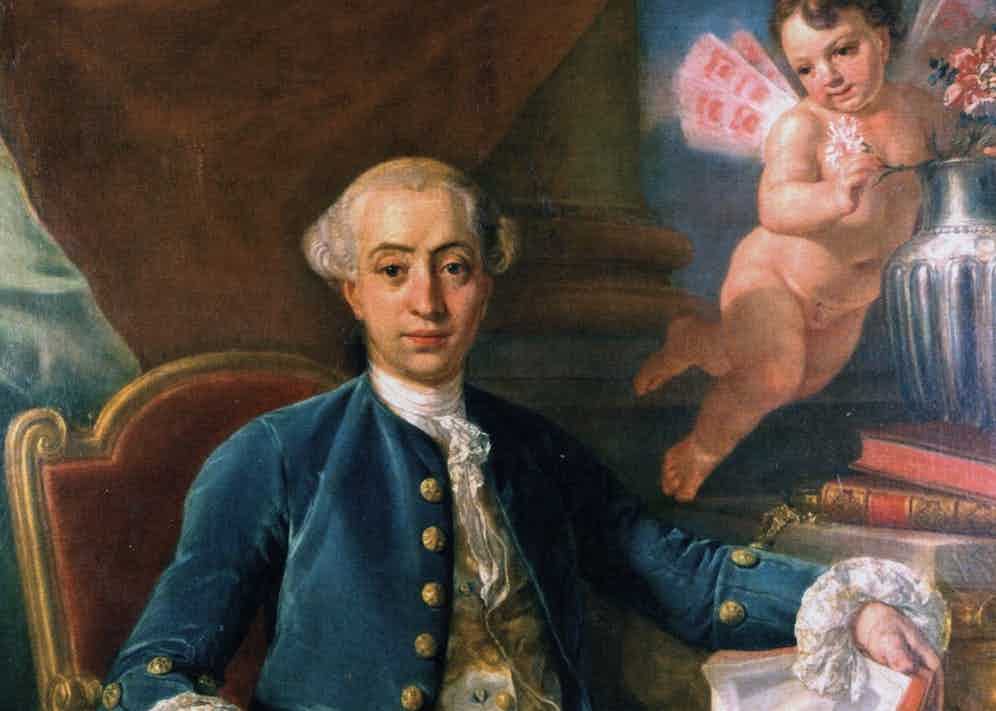 Giacomo Casanova’s powers of seduction may be legendary - his name, after all, was a byword for lovers not only in his lifetime, but for the more than two centuries since. But they are not easily attributed to good looks. It wasn’t due to his pocketbook either, which was typically empty, leading to a life often on the run from creditors. Rather Casanova charmed with stories. He carefully worked his words to get his way. This, after all, was the man who convinced the Pope to give him special dispensation to read pornographic books.

Of course, Casanova was also a man of his own invention, the ultimate “free agent”, as he called himself. For his alleged bedroom tally, said to number 136 but likely to count in the hundreds more, including aristocrats, servants, prostitutes, the impotent Duke Maddaloni and the Turkish foreign minister - not to mention his other antics and run-ins - we can only turn to his own posthumously-published memoirs.

But then this is, as modern parlance would have it, warts and all - including those of the syphilis that spun him into a whirl of depression and a suicide attempt. He doesn’t, for example, stint from recounting his sexual encounter with his daughter - one for which his wife gave consent, which resulted in the birth of his son and grandson. The other of the two children Casanova was known to have fathered was by a 14-year-old singer he met while she was pretending to be a castrated man.

"He had his first sexual encounter aged 11, and his first experience of intercourse at the surprisingly late age of 17 - but then this was with two sisters."

Indeed, to say that his private life was colourful would be understatement: he had his first sexual encounter aged 11, and his first experience of intercourse at the surprisingly late age of 17 - but then this was with two sisters. His first homosexual encounter occurred when a man seduced him while the pair were spying on the naked women of an Ottoman harem. “It would have been impolite to refuse,” as Casanova noted. Who knows, but the carefully orchestrated personal PR that is social media this doesn’t seem to be.

Unwholesome? Sure - the Venetian Inquisition eventually jailed Casanova for five years for behaviour deemed iniquitous to society. And certainly he was not above conducting a straight con - rustling up a warped spin on the Kabbalah, he persuaded a fantastically wealthy Marquess that the only cure for her old age was to give him a lot of money and watch him have sex with virgins. The law degree he claimed to have completed aged 16 - probably made up. A bit of occult mysticism, a touch of alchemy, even a few syllables of fake grandeur - he would occasionally add the aristocratic ‘de Seingalt’ to the end of his name - and Casanova seemed capable of persuading just about anyone of anything. He did, after all, come from a family of actors. Clearly, he was not a man to play cards with. Fools, he surmised, were there to be fooled.

But the bedroom stories are just one side to a multi-faceted personality, perhaps even one that exemplified a life lived in the moment. “I never had any fixed aim before my eyes,” as Casanova wrote in his memoirs. “My system, if it can be called a system, has been to glide away unconcernedly on the stream of life, trusting to the wind wherever it went.”

That imprisonment? Naturally Casanova proved the only man to ever escape the prison at the top of the Doge’s Palace. When he wasn’t busy in bed, he penned 42 books in his 73 years, not to mention an opera libretto, poetry and treaties philosophical, mathematical and geometrical. He was at the centre of things, mingling with the likes of Voltaire and Rousseau, Mozart and Benjamin Franklin, and often in the right place at the right time - having saved a Venetian senator from a fall down some stairs, he was granted a degree of protection for his dodgier activities. He established France’s first national lottery, which made him independently wealthy. Most of that he subsequently gambled away.

"When he wasn’t busy in bed, he penned 42 books in his 73 years, not to mention an opera libretto, poetry and treaties philosophical, mathematical and geometrical."

Certainly, throughout his lifetime, Casanova had many opportunities which he either could not stick with or declined in the mistaken belief that something better was just around the corner. Yes, he ended his days alone - as perhaps only someone who had fostered only the most fleeting of relationships might - but neither destitute or wracked by guilt. Rather, he was working quietly - for him, no doubt, tediously - as a librarian. It was during the quieter moments that he put down his life story, maybe embellishing here, adding a flourish there. It was, for example, 250 years ago this year when he fought his one and only duel - in Warsaw, with a colonel. It was, of course, over a women - an Italian actress, naturally. Wounded in the hand, doctors recommended it be amputated. But Casanova refused, cryptically implying that the loss would unduly affect his performance.

Was this a calculated, fictional nonchalance, or did it in some way embody a life philosophy? Casanova certainly had a straight forward doctrine when it came to matters of regret. It was not, he said, an emotion he felt, while the good times in contrast still had power to resonate in him. “By recollecting the pleasures I have had formerly, I renew them, I enjoy them a second time,” he noted, “while I laugh at the remembrance of troubles now past, and which I no longer feel.”