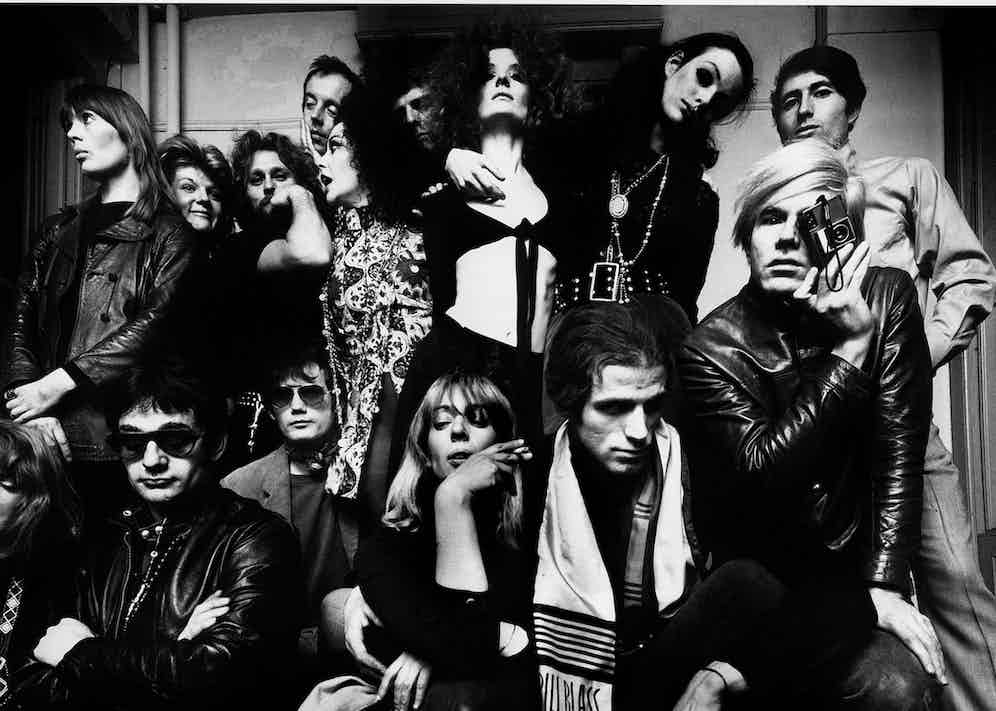 Andy Warhol and friends at The Factory, 1968.

1965 was a monumental year for Andy Warhol. He met Edie Sedgwick for the first time, made arthouse films Drink, Horse and Vinyland had one-man exhibitions in Paris, Milan, Buenos Aires and Stockholm (amongst other cities). Between 1964 and 1966, he also made his gargantuan Screen Tests, 472 short black-and-white portraits of artists including Lou Reed, Nico, Dennis Hopper, Susan Sontag and Marcel Duchamp, a 32 hour “yearbook of the mid-1960s avant-garde”, as Callie Angel put it in her catalogue for the collection. Some of these profiles, like the novels in Balzac’s Comédie Humaine, fell into separate mini-series, most notably The 13 Most Beautiful Boys and The 13 Most Beautiful Women.

Building on the theme of aesthetic lists, it was Warhol’s friend Lester Persky – a former World War II merchant seaman, New York Times newsman and ad executive who introduced Warhol to Edie Sedgwick in the first place – who hosted a party for ‘The Fifty Most Beautiful People’ at The Factory, Warhol’s fabled New York studio and den of amphetamine-dusted lithograph prints and silkscreens. Persky would later hail it “the best party of the sixties”, even if he said so himself.

Warhol’s memoir POPism gives a waspish, impressively detailed account of the night. Persky had had to pick up Wizard of Oz star Judy Garland himself, so was late to his own party. Onedine, an actor Warhol had met at an orgy in 1961, claimed that when Judy Garland finally arrived, carried in from the elevator by Persky and Tennessee Williams, “everyone refused to recognise her.” At one point, Rudolf Nureyev asked Garland to twist. They got up. Everyone turned away. “The whole party was very involved with drugs and the new kind of celebrity. Even Nureyev was considered very old hat”.

At the vanguard of that new kind of celebrity was Edie Sedgwick, Warhol’s muse and near-doppelganger. Photographer and longtime Warhol collaborator Gerard Malanga suggested it was at ‘The Fifty Most Beautiful People’ party that “the stars went out and the superstars came in... there were more people staring at Edie than at Judy.” But in retrospect the mix of old and new sounds more fluid and ambiguous: art collector David Whitney danced by in the arms of Rudolph Nureyev, while Tennessee Williams waltzed past in the arms of experimental painter Marie Menken.

"Every elite guest was a dot in the pointillism of the party."

Every elite guest was a dot in the pointillism of the party. Guest Brigid Berlin told Warhol about the summer she married a window dresser, came into a trust fund and spent the summer “renting helicopters to fly into the city to pick up her mail.” Sedgwick spent most of the night “laughing” with Rolling Stone Brian Jones, who died four years later. Also there were poet Allen Ginsberg, Naked Lunchiconoclast William Burroughs, actor Montgomery Clift and Juliet Prowse, fresh from her break-up with Frank Sinatra.

But POPism's most surreal passage is on Judy Garland, who had decided she wanted to be play the lead in Tennessee Williams’ new play The Milk Train Doesn’t Stop Here, soon to be produced for the screen by Persky himself. She gave renditions of all the different ways she could play the character of Flora when Persky quipped: “The funny thing is, Judy, that Tennessee thinks of you a great singerrather than a great actress.” Judy was shocked and wouldn’t let it go all night, until she confronted Williams, mid-conversation with Allen Ginsberg and William Burroughs. Persky was aghast: “My God! She’s transmogrified one remark into a complete visitation”. In the subsequent row, Garland admitted she lied to her analyst and Williams was appalled. “You lahhhhed to yo’ analyst? Oooo, that’s a crahhhhm, that’s a see-yin!” (Garland later found out that her analyst was on the MGM studio payroll and was paid to cajole her to do what her employers told her).

The party of the decade lasted until 5:00pm the following day. Photographer David McCabe said: “Fifteen minutes. Fifty most beautiful people. Andy was such a control freak and numbers man. Yes, there were a lot of beautiful people. But I must say, Tennessee Williams, with all of his southern charm, was belle of the ball.” Warhol noticed a common link between Garland and Sedgwick: “a way of getting everyone totally involved in their problems. When you were around them, you forgot you had problems of your own”.

In Mémoires de deux jeunes mariées, Balzac wrote that “society bristles with enigmas that look hard to solve. It is a perfect maze of intrigue.” All three of the parties in our series – The Surrealist Ball, YSL's Opium Launch and The Factory's celebration of high-society beauty – are individual labyrinths to get lost in, deceptively ordered constructs with a raging anything-goes id in the middle, caricatures of life at once pared-down, heightened and rigged with surprises. Feel free to draw inspiration from the masters for your own festivities.