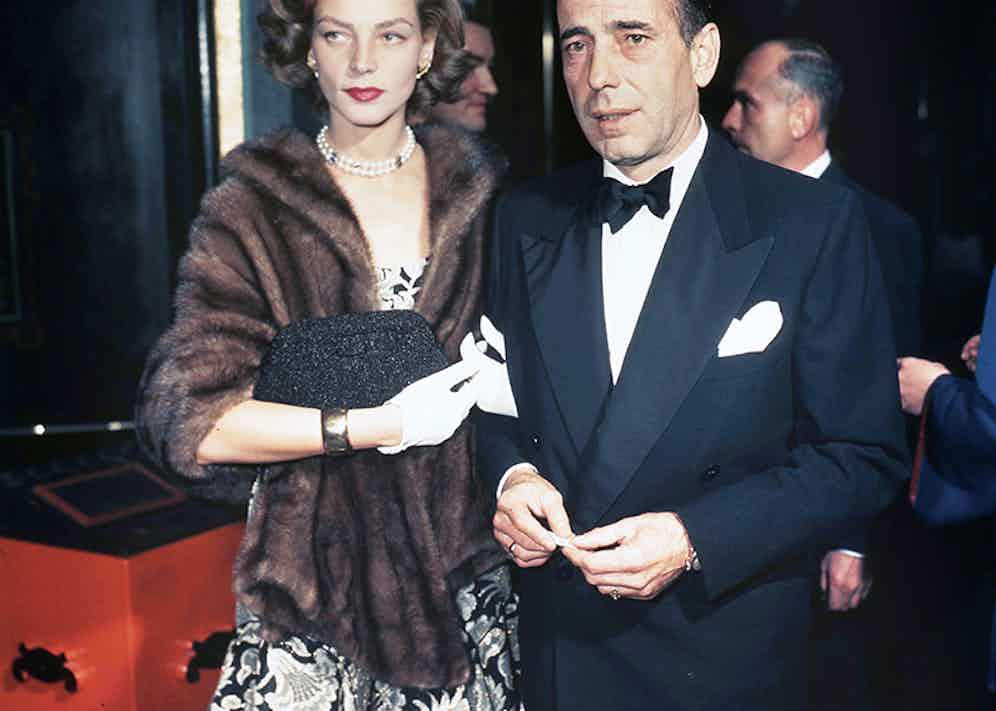 The lie goes that Humphrey Bogart’s last words were, “I should never have switched from scotch to martinis”. As much as noir fans might wish it were so, the truth is far less glib and, in fact, a perfectly weighted blend of prose and poetry. Suffering from advanced oesophageal cancer in 1957, Bogart’s final utterance was addressed to his wife, Lauren Bacall: “See you, kid. Hurry back.”

The reality was more mundane than its subsequent mythology — she was dashing away from the hospital to pick up their children — but, having acquired the patina of legend, it might as well have come from the rye-soaked pen of Hammett or Chandler.

Every detail of Bogart and Bacall’s relationship appeared leeched from one of the Hollywood films in which they starred, often together. They seemed powerless to put the brakes on their entwined destinies when they met on the set of To Have And Have Not in 1943. She was a 19-year-old Jewish girl who had just changed her name from Betty Perske, and still lived at home. He was 44, married to the actress Mayo Methot, and struggling his way through a relationship so volatile that they became known as the ‘Battling Bogarts’. (They even had a carpenter permanently on call to repair the damage they caused to their home during frequent drunken stoushes; she once stabbed him with a kitchen knife, and on another occasion she pulled a pistol on him during a dinner party.)

To put Bogart and Bacall’s age difference into contemporary terms, picture Ben Affleck hooking up with Lorde. Even in an era in which wily older males bedding supplicant younger starlets was as much a Hollywood cliché as some corn-fed kid from Oregon being killed storming a beach in Normandy, the Bogart-Bacall affair scandalised Tinseltown.

Better still, every moment of the burgeoning chemistry had been captured on film. At the beginning of To Have And Have Not, and in a voice huskier than the Iditarod, Bacall reaches for a cigarette and asks, “Anybody got a match?” Bogart obliges, seemingly aware of every incendiary connotation of the word. The film was turgid with barely concealed innuendo, the couple’s chemistry palpable. Its apotheosis came with six perfectly delivered lines from Bacall that may well have been a précis of the years to come: “You know you don’t have to act with me, Steve. You don’t have to say anything, and you don’t have to do anything. Not a thing. Oh, maybe just whistle. You know how to whistle, don’t you, Steve? You just put your lips together and ... blow.” The lines between fiction and the real world blurred even further when they retained their character names as terms of affection long after shooting had wrapped. She called him Steve; he called her Slim. 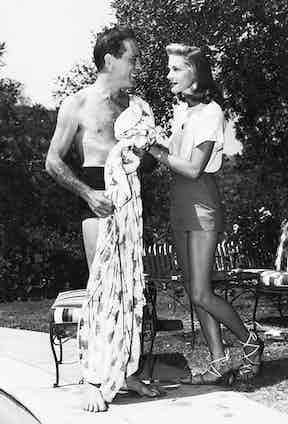 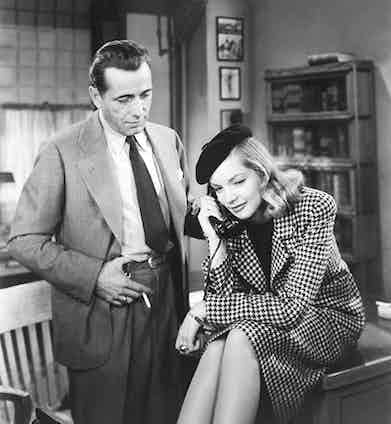 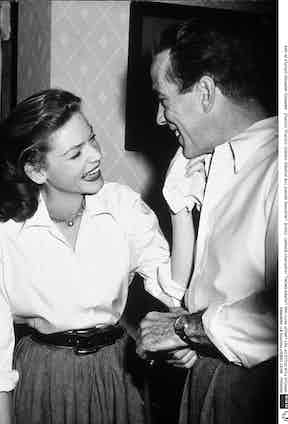 A year before, Bogart had cemented his place in the celluloid firmament as Rick Blaine in Casablanca. His hard-drinking, smoothly cynical, immaculately tailored on-screen persona became indistinguishable from his public perception. He may as well have spat bullets and pissed bourbon. But the teenage Bacall saw something different. Although she bristled when his shadow fell across interviews decades later — Bacall famously told Michael Parkinson that “being a widow is not a profession” when he dared to bring up her late husband — she described their initial coupling as “the headiest romance imaginable”.

In marked contrast to the leathery aloofness he radiated in films such as The African Queen and The Maltese Falcon, Bacall painted him as shy, gentle, vulnerable, emotional, and even insecure. Despite being married three times before, he sobbed during their vows, and his private letters to her included lines such as: “You came along and into my arms and into my heart and all the real true love I have is yours — and now I’m afraid you won’t understand and that you’ll become impatient and that I’ll lose you – but even if that happened, I wouldn’t stop loving you, for you are my last love and all the rest of my life I shall love you and watch you and be ready to help you should you ever need help.”

When not with Slim, it seems Bogart felt as incomplete as a PI feature without a femme fatale. He even took a turn for the treacly when alone: “All the nice things I do each day would be so much sweeter and so much gayer if you were with me. I find myself saying a hundred times a day, ‘If Slim could only see that’ or ‘I wish Slim could hear this’. I want to make a new life with you — I want all the friends I’ve lost to meet you and know you and love you as I do — and live again with you, for the past years have been terribly tough, damn near drove me crazy. You’ll soon be here, Baby, and when you come you’ll bring everything that’s important to me in this world with you.” Remember this is from the man who embodied the most hardboiled gumshoe of them all — Philip Marlowe — in The Big Sleep.

Bacall was no less effusive in her recollections. “What it felt like to be so wanted, so adored,” she would later say. “No one had ever felt like that about me. It was all so dramatic, too. Always in the wee small hours when it seemed to Bogie and me that the world was ours, that we were the world. At those times, we were.”

Marriage was inevitable, and if anyone was still in doubt as to Bogart’s swelling sentimental heart, the nuptials settled the question in a river of salted cheeks. Bacall recalled: “As I glanced at Bogie, I saw tears streaming down his face — his ‘I do’ was strong and clear, though. As Judge Shettler said ‘I now pronounce you man and wife’, Bogie and I turned toward each other. He leaned to kiss me and I shyly turned my cheek; all those eyes watching made me very self-conscious. He said, ‘Hello, Baby’. I hugged him and was reported to have said, ‘Oh, goody’. Hard to believe, but maybe I did. Everyone hugged and kissed everyone else and more tears were shed. Bogie said it was when he heard the beautiful words of the ceremony and realised what they meant — what they should mean — that he cried.” 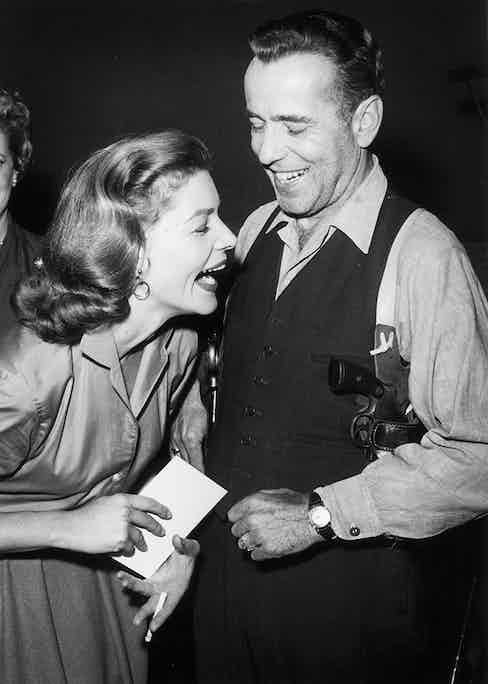 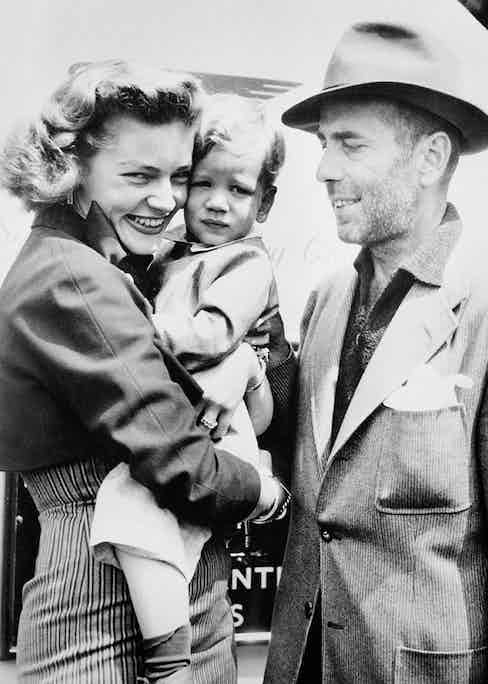 Cast opposite arguably the world’s biggest film star of the day, Bacall cited director Howard Hawks’s instruction “to approach a scene with a man as a man would”. She added: “He wanted insolence and he wanted a woman in control.” It was a directive that perfectly suited Bacall’s demeanour. For beneath the exquisite complexion and stellar cheekbones was a spine of steel, a barely repressed insouciance that manifested itself in the arch of an eyebrow and tongue that could be vicious under the right circumstances. In 2004, for example, she was asked what it was like performing with fellow “legend” Nicole Kidman. To which the then 79-year-old replied: “She can’t be a legend. You have to be older.” Half a century before the term “zero fucks given” became common parlance, Bogart and Bacall embodied the notion. What others thought of them, to paraphrase one of Bogart’s famous Casablanca lines, “didn’t amount to a hill of beans”.

Inviting even more scrutiny, in 1947 the Bogarts became founding members of the Committee for the First Amendment, Hollywood’s response to the activities of Senator Joe McCarthy’s House Un-American Activities Committee. By her own reckoning, Bacall was the driving force that got her husband on a plane to Washington to address the communist witch hunt decimating America’s creative community. This was no mere public appearance, though. Many actors, directors and writers saw their careers evaporate overnight with the whisper of ‘communist sympathiser’. To take a stand came with significant risks, but Bogart, who voted Republican until he met Bacall, and his spouse were not content to be witnesses to what they viewed as an abomination.

Bogart and Bacall drew comparisons with that other great, seemingly mismatched, couple of the day: Spencer Tracy and Katharine Hepburn. But one always got the feeling that with the former, it was more than a meeting of just minds. It smouldered like a California brush fire, even if the accompanying aesthetics were often more a matter of happenstance than design. Quizzed about her signature ‘look’, which tightened the tweeds of both her co-star and viewers around the globe, she said: “By the end of the fourth take [on To Have And Have Not], I realised that one way to hold my trembling head still was to keep it down, chin low, almost to my chest, and eyes up at Bogart. It worked, and turned out to be the beginning of ‘the look’.” They went on to star in three more films together: The Big Sleep, Dark Passage and Key Largo. 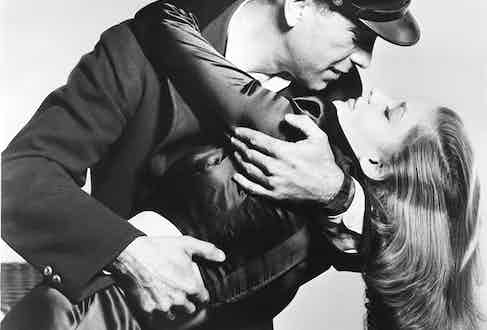 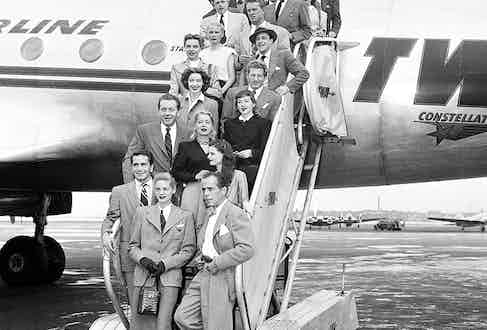 Off-screen, the relationship was by all accounts as loving as it was glamorous and raucous. Bogart and Bacall were integral in the creation of the Las Vegas Rat Pack. In fact, it was rumoured that she coined the phrase on encountering the severely hungover group. According to observers, Bacall loved a party, and it was one of the rare areas in which their age gap became apparent. “Sometimes Bogie would complain that he felt like my escort, not my husband,” she said.

With two such combustible characters, there were inevitable flare-ups. Bacall was never threatened by another woman but felt she couldn’t quite compete with Bogart’s racing yacht Santana. “He was in love with her sleek lines and the way she moved in the water. Sailing was his greatest joy,” she would say later.

If Santana was his baby, when Bacall announced her first pregnancy Bogart was all at sea. “The day I told him I was pregnant, we had the biggest shouting match of our lives,” she said. “It hadn’t occurred to me that, 48 years old and childless, he wasn’t ready to be a father. He kept yelling that he hadn’t married me just to lose me to a baby.” It took Bogart a day to get used to the idea, and the couple ended up with two children, Stephen (named after Bogart’s To Have And Have Not character) and Leslie.
They were to have a mere dozen years together beforeBacall became a widow at 33. “I didn’t know what the hell I was doing,” she later said. “If I didn’t have those two little children, I don’t know what I would have done.” What she did was become involved in a brief affair, and spectacularly fractious engagement, with Frank Sinatra. Although she continued to work steadily, Bacall only received her first Oscar nomination in 1996. She found marital happiness again, with fellow actor Jason Robards, but such was the glorious improbability of her first love that it remains a beacon of hope for seemingly mismatched lovers into the next millennium.

Thirty-four years after the release of the last film they made together, Bogart and Bacall’s on-screen chemistry retained enough mythic allure to inspire one of 1982’s biggest hit songs. It was by a one-hit wonder called Bertie Higgins and featured the immortal lines, “We had it all/Just like Bogie and Bacall/ Starring in our own late, late show/Sailing away to Key Largo.”

The cynics will say that their tale has endured because Bogart didn’t live long enough for his child bride to have to nurse him to decrepitude, and perhaps they have a point. Yet such voices will be drowned out by those of the view that Bogie and Bacall forever personify the triumph of love over cynicism and doubt, heartbreak and experience. Especially now — depending on your views of the afterlife — that they are together once more.

See you, kid. Hurry back.