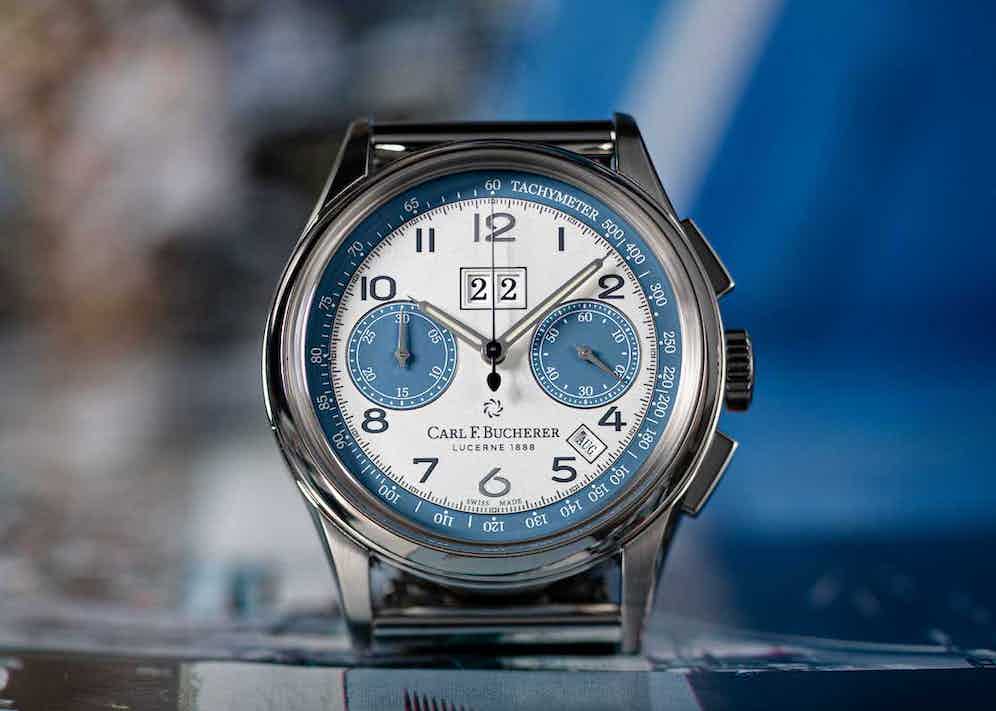 There is a common thread that runs through both wristwatches and cars. Both are fiercely collected by incredibly passionate aficionados, with a fervour that makes even the most die-hard football fan look a little half-hearted. There is also a lot of technical know-how involved in making both cars and watches, alongside which runs the competitive drive to innovate and create the latest interpretations or improvements on each component. And one family-run Maison, Carl F. Bucherer, has a long-lived relationship with a very special car in a story that is based close to its home in Lucerne, Switzerland.

In 1949, Carl Eduard Bucherer, son of founder Carl Friedrich, entered a blue Lincoln Cosmopolitan Town Car into the Concours d’Excellence International. More than a showpiece that sat in storage to be paraded at shows and rallies, the Lincoln was actually the Bucherer’s family car. That was in fact the first year of manufacture for the Lincoln Cosmopolitan, so the car would certainly have been a real head-turner for all attendees at the show. One can only imagine the excitement of Carl Eduard’s son Jörg, who at the impressionable age of 13 saw his family’s new car being shown at the prestigious car event and, in fact, claiming the Public Prize. Vintage cars, much like vintage watches, often change hands over the years, and so was the case with this Lincoln Continental. However, Jörg G. Bucherer managed to track down that original car and submitted it for full restoration to bring it back to its original glory. The body work was stripped down to bare metal and the engine painstakingly rebuilt to allow the automobile to look as good as it did on the day it was delivered to the family in Lucerne. The teal-blue paintwork, white wall tires and polished chrome work make the post-war car look new. 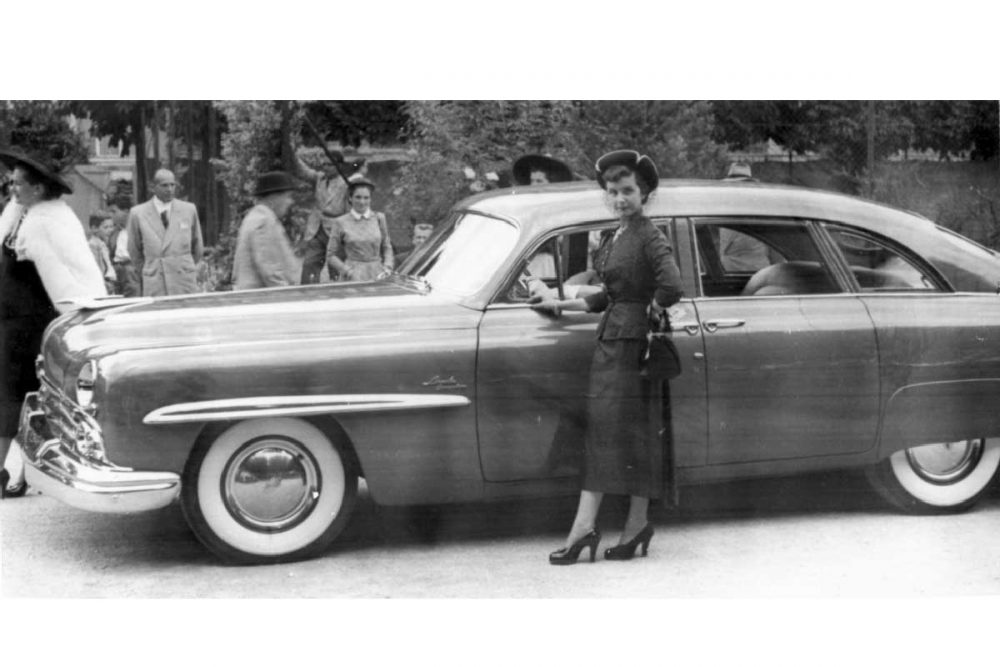 The Bucherer family’s Lincoln Cosmopolitan Town Car at the Concours d’Excellence International in 1949. 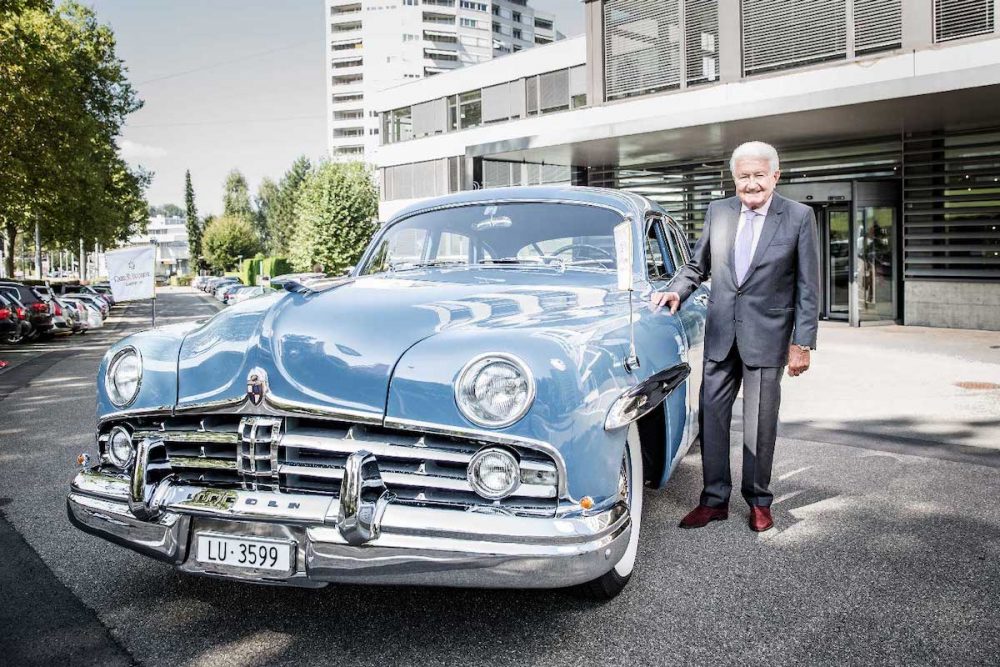 Jörg G. Bucherer, the Chairman of the Bucherer Group, tracked down the family’s original blue Lincoln Cosmopolitan Town Car and submitted it for full restoration to bring it back to its original glory.

Jörg G. Bucherer, now the Chairman of the Bucherer Group, has a very special connection to the classic car. He says, “It was always a very special experience to sit next to my father in this magnificent car and to go on excursions.” And the lovingly restored automobile remains a meaningful part of his life: “Now the car is running smoothly again, sometimes a bit bumpy, but I always feel transported back to my youth.”

Sascha Moeri, the CEO of Carl F. Bucherer, loves the story of the watch and the inspiration it took from the Bucherer family’s beloved car. He says, “This is such an incredible narrative. All of us who have been privileged to work closely with Jörg G. Bucherer over the years know how much this car means to him. Our designers and watchmakers took inspiration from the automobile and created a great timepiece that pays homage to the Chairman of the Bucherer Group, to his passion for the family car that returned to his life after so many years, and, of course, to our beloved hometown of Lucerne, the place where the car and the Bucherer family have shared such an extraordinary history.”

To celebrate this amazing moment for the family and the brand, Carl F. Bucherer is releasing a limited-edition watch, the Heritage BiCompax Annual Lucerne, in a run of 188 pieces. The 41mm steel watch comes on a Milanese-style bracelet with a quick release system that allows for a quick change to the calfskin leather strap that also accompanies the Heritage BiCompax Annual Lucerne. The watch pays homage to Swiss city that is the brand’s and family’s hometown, and tips its hat to the Lincoln Continental after which it was designed. 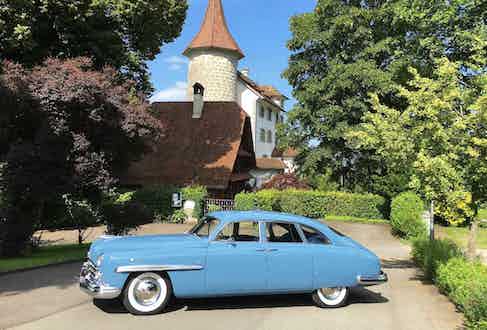 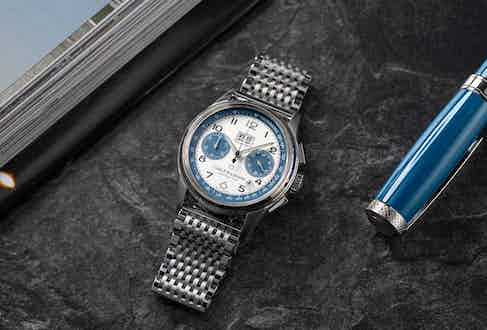 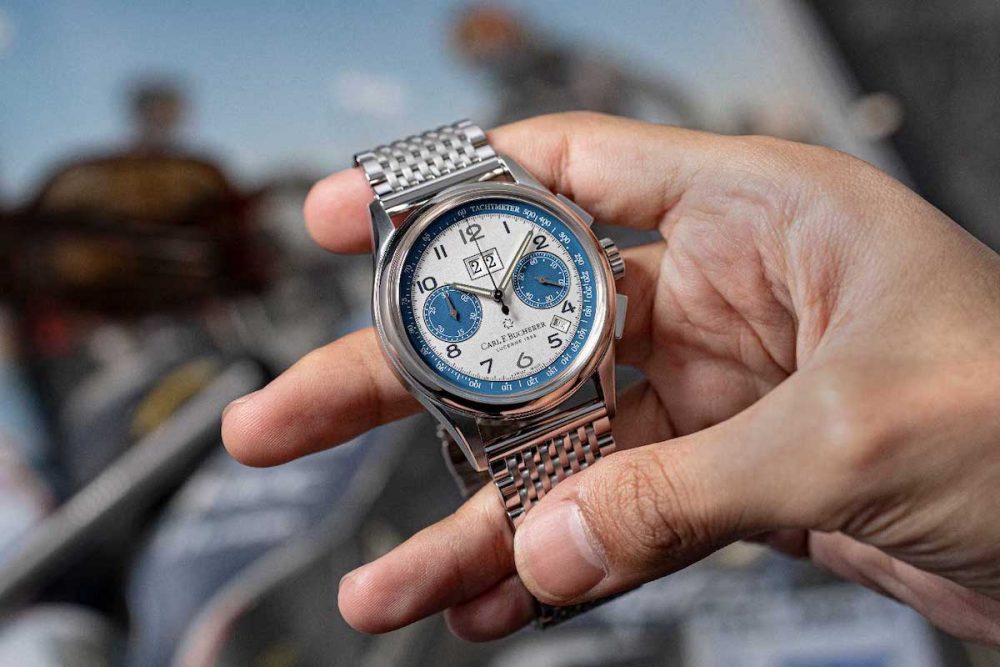 The dial shares a couple of elements with the Lincoln, including blue and chrome elements. The teal blue of the car is picked up on the subdials, running seconds, chronograph minutes and the tachymeter scale. (© Revolution) 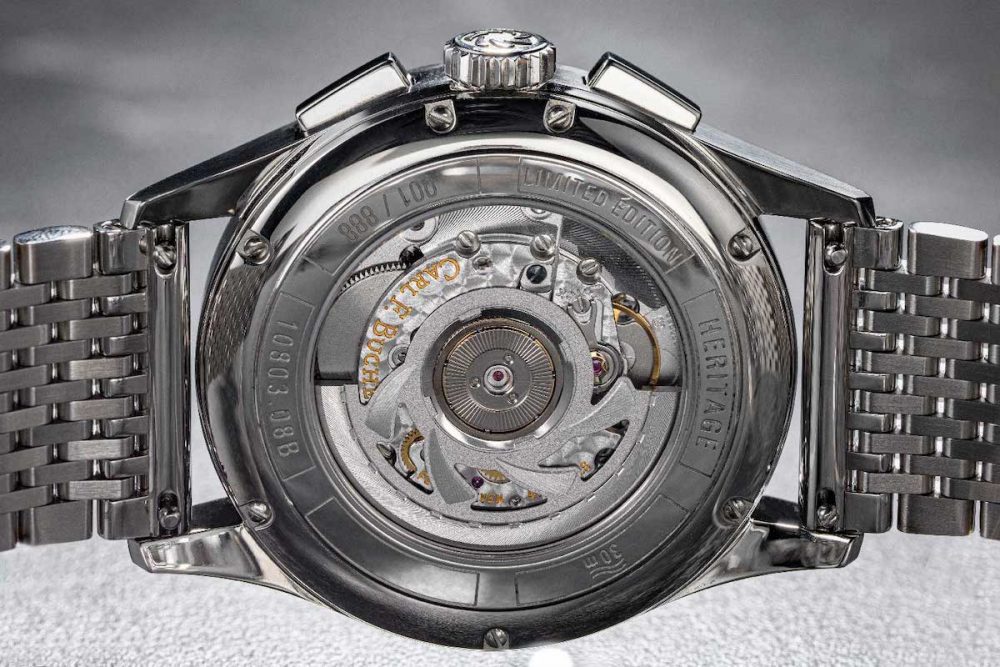 Powered by CFB caliber 1972, the watch comes on a Milanese-style bracelet with a quick release system that allows for a quick change to the calfskin leather strap that accompanies the Heritage BiCompax Annual Lucerne. (© Revolution)

The dial shares a couple of elements with the Lincoln, including blue and chrome elements. The teal blue of the car is picked up on the subdials, running seconds and chronograph minutes, as well as a chapter ring on the outer edge of the dial for the tachymeter scale. The silver dial has applied Arabic numerals with the 12 and 6 having a polished chrome finish — a nod to the polished chrome hardware on the Lincoln. The icing on the cake is a set of luminous filled syringe hands that are perfect for a watch celebrating a late 1940s car, as this style was very popular at that time.

As well as being a striking chronograph with classic vintage-esque styling, the watch fuses this traditional aesthetic with a thoroughly modern movement, the caliber CFB 1972, that is not only a chronograph but also an annual calendar. Annual calendars are clever complications that only require adjustment on the first day of March each year. The Heritage BiCompax Annual Lucerne neatly displays the month between four and five o’clock between the hour markers and has a double date indicator below 12 on the upper half of the dial. The movement also boasts a power reserve of 42 hours.

The Heritage BiCompax Annual Lucerne occupies a privileged place in Carl F. Bucherer’s Heritage Collection, a part of the Maison & Heritage brand world. The Collection perfectly translates the 133-year history of Carl F. Bucherer onto its clients’ wrists with exceptional timepieces that combine tradition, excellence and innovative spirit and it’s the perfect fit for the BiCompax Annual, whose first edition, launched in 2019, was inspired by one of the brand’s archival pieces dating from about 1950. 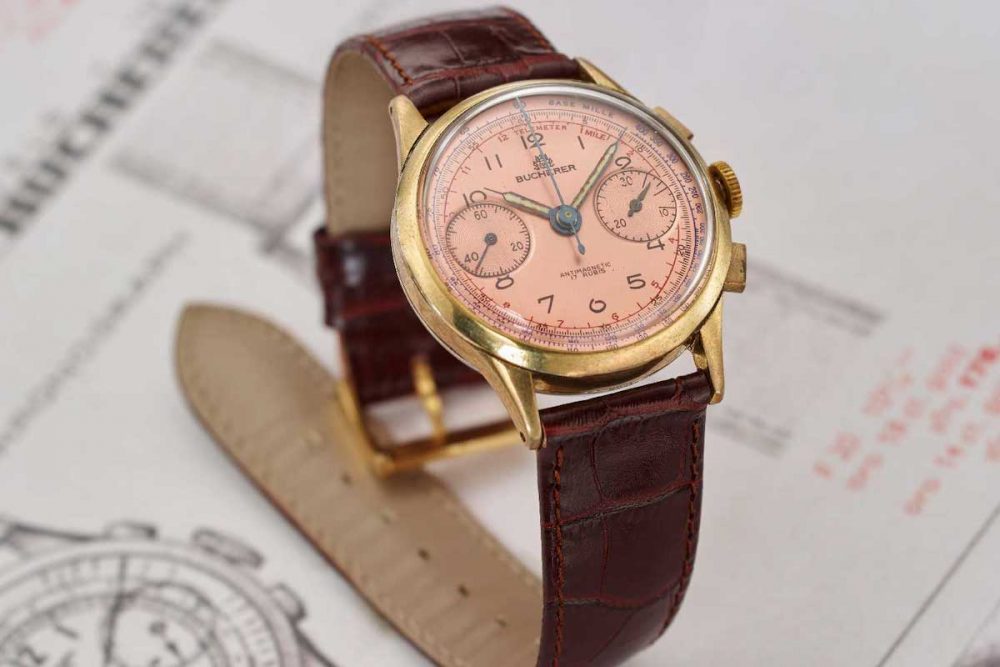 The BiCompax chronograph with its salmon coloured dial and gold case was developed at the end of the 1940s and was made available for sale around 1950. This Chronograph was the precursor to the modern wristwatch and an inspiration for the new Heritage BiCompax Annual. 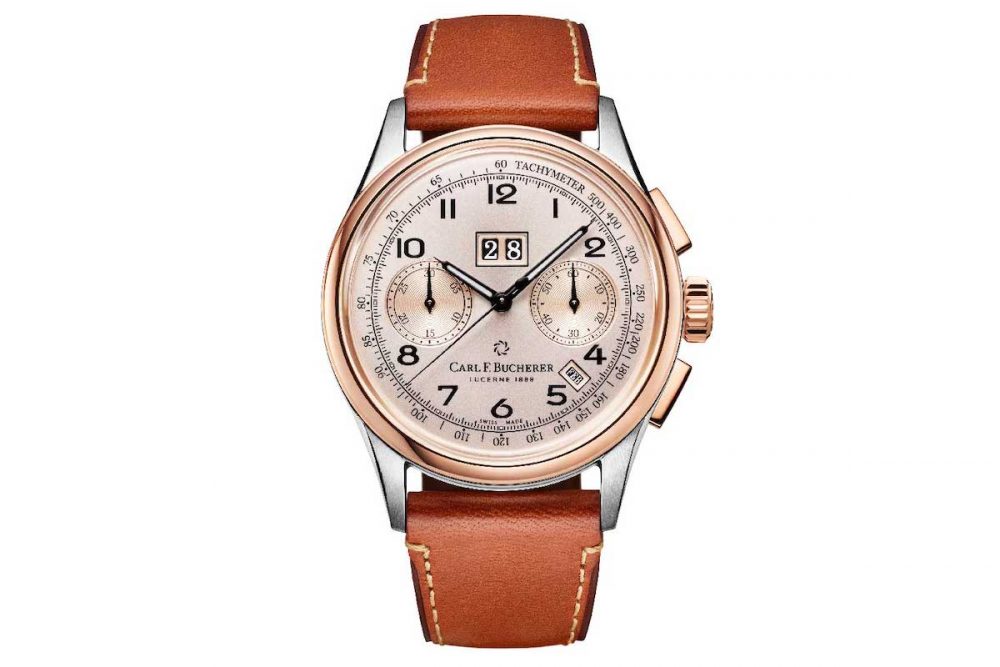 Introduced in 2019, this bi-colour Heritage BiCompax Annual features a rose-and-champagne-coloured dial, reminiscent of the 1956 timepiece that inspired the watch. 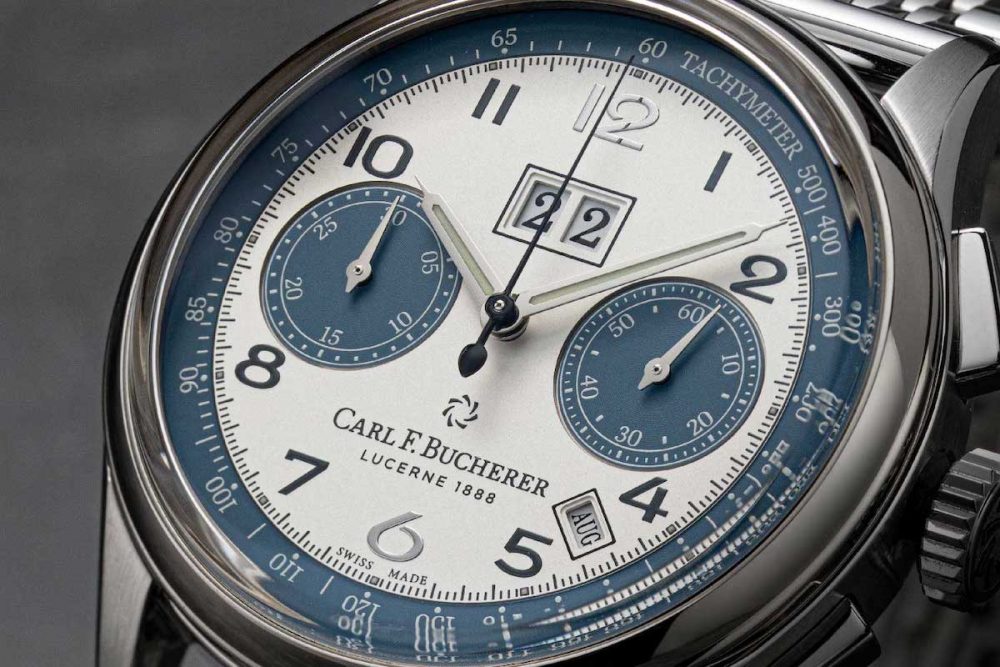 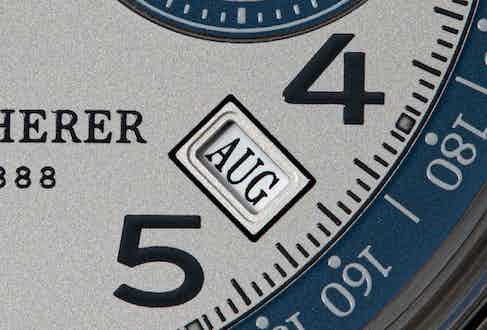 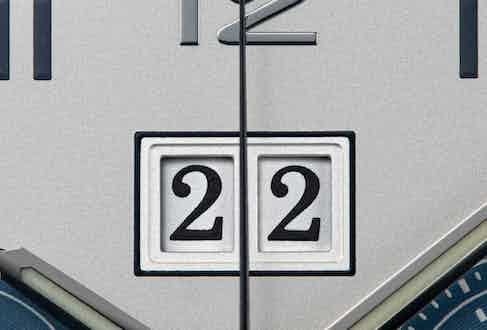 Carl F. Bucherer enjoys being one of a small number of Swiss watch manufacturers that are both independent and still family owned. Founded in 1888 by its namesake Carl Friedrich Bucherer, the company is now in the hands of the third generation and grandson of the founder, Jörg G. Bucherer. The brand manages to be both traditional in its approach, yet innovative in the way it executes its watches. For example, Carl F. Bucherer was the first brand to put the peripheral rotor into series production.

The peripheral rotor is an annular oscillating mass that sits around the edge of the movement, thus giving an uninterrupted view of the entire caliber. The issue was always that using a traditional winding crown and stem was difficult due to the rotor moving around the inside of the midcase. So, traditionally, the crown had to be placed at the back of the case. Carl F. Bucherer overcame this by developing a bi-directional rotor that allowed them to have the crown in the traditional place.

In the meantime, the brand has added two other patented peripheral technologies, including a peripherally-mounted floating tourbillon and, most recently, a minute repeater with a peripheral regulator.

Carl F. Bucherer is based in Lucerne, with its medieval buildings amongst the mountains on the shore of Lake Lucerne. So important is this location that the brand uses “Made of Lucerne” as its tag line. And that city is also honoured in the name of a beautiful watch that pays homage not only to a hometown but also to a truly unique family car’s return to its former glory and its original owners. What could be better? 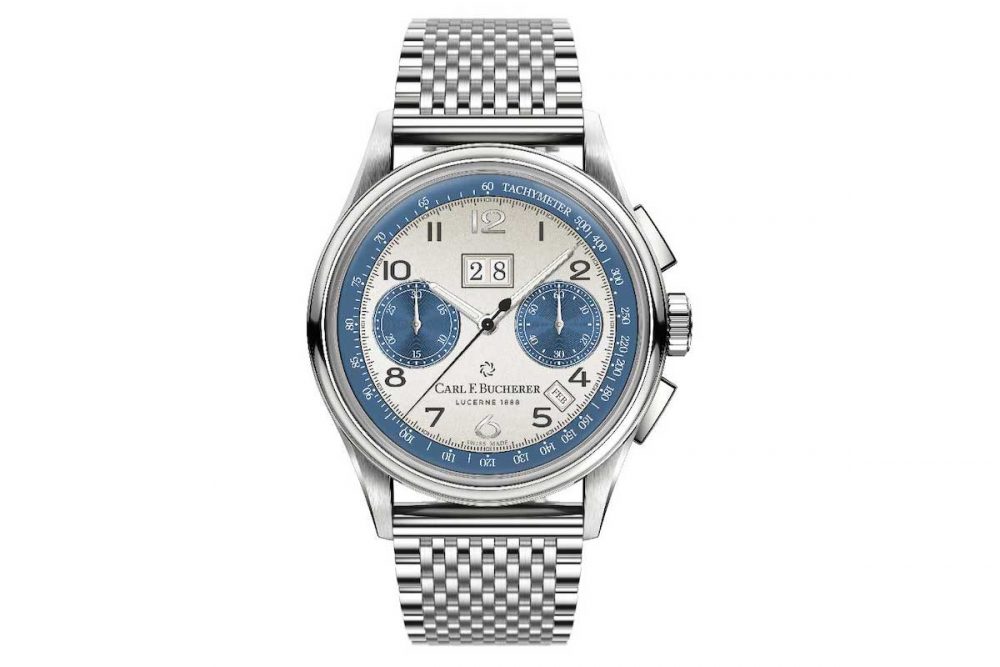 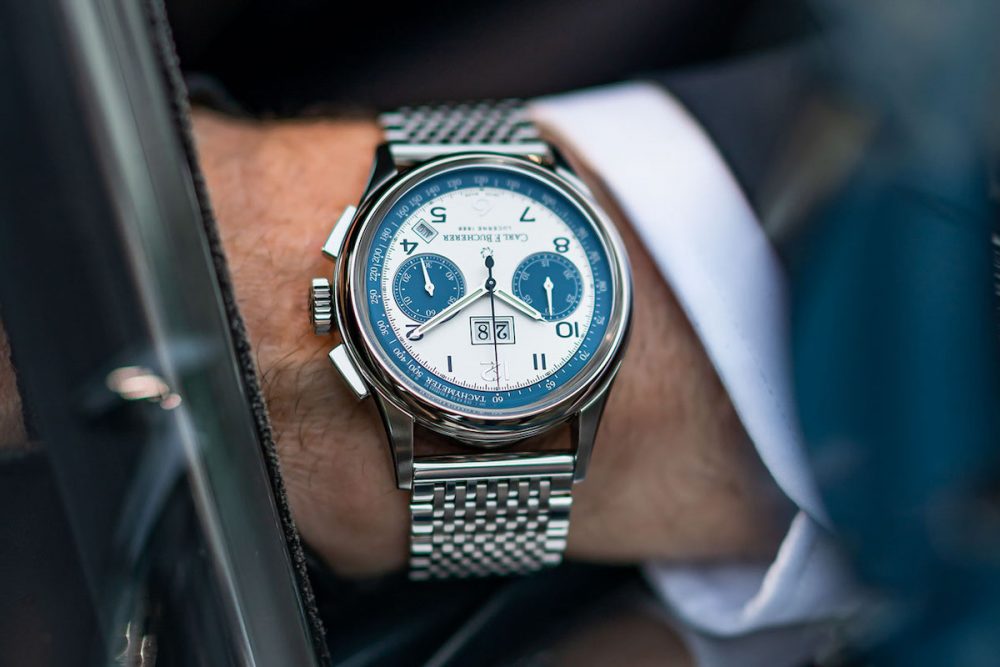 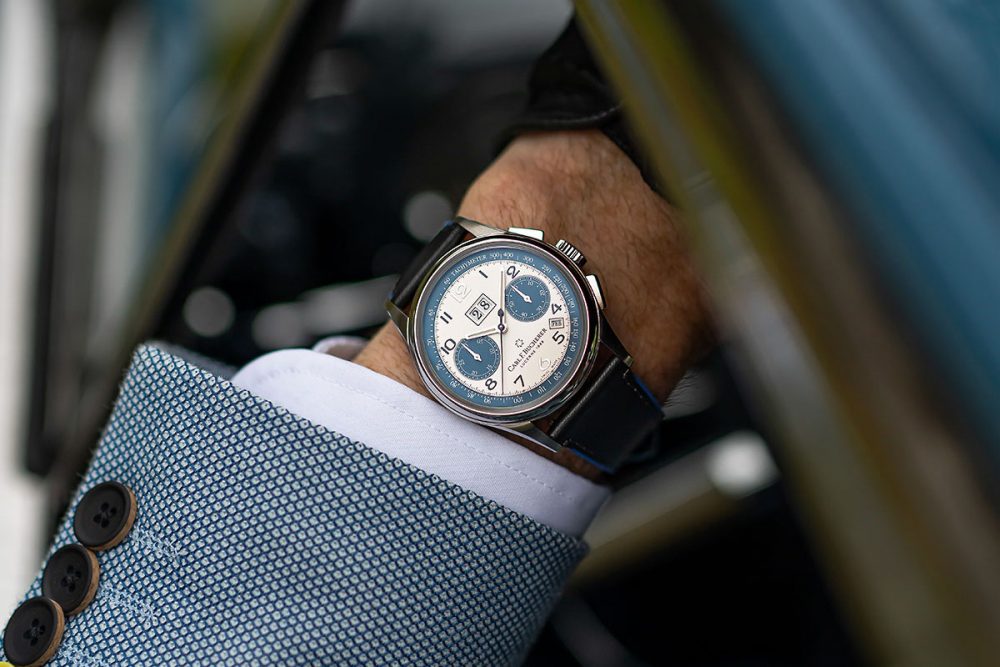 Stainless steel, double-domed sapphire crystal with anti-reflective coating on both sides, water-resistant to 30 m (3 bar), diameter 41 mm, height 14.15 mm; Silver-colored with light blue counters and tachymeter zone, 10 Arabic numerals (from which the 12 and 6 are chrome colored)