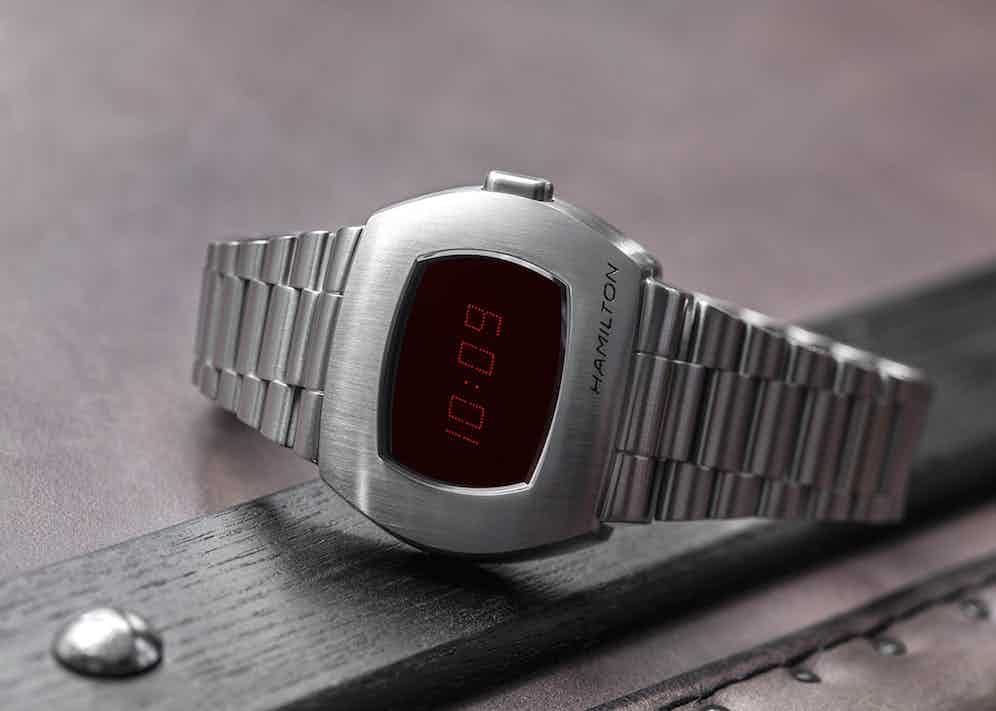 One watch recently caught the eyes of many enthusiasts when it took over news websites and social media platforms. I’m talking of course about the Hamilton PSR, the revival watch of the brand’s 50-year-old icon that was the Hamilton Pulsar.

Revolution covered the basics of the new timepiece in their introduction story which you can go back and read here, and now at The Rake we're proud to announce that the Hamilton PSR 2020 in Stainless Steel is available to pre-order. We're also taking registrations of interest for a very limited quantity of the Hamilton PSR 2020 with yellow gold PVD coating.

Scrolling through Instagram, while many were sharing pictures of the newly released Hamilton PSR, some were showing their original Pulsar from the 1970’s. One such enthusiast to do so was none other than famous watch collector Auro Montanari, better known to the internet as John Goldberger, who shared his own personal Hamilton Pulsar P3 seen below.

Now Mr Goldberger isn’t your typical watch collector, you could even refer to him as the godfather of watch collecting, so you bet that if he was showing a Pulsar to the world, it would have something special about it. Right on cue, Goldberger’s Pulsar P3 features none other than the famed Tiffany & Co. signature that is so sought after by collectors. As some might remember, in the 1970’s when the original Hamilton Pulsar launched, the innovative digital timepiece was sold at selected upscale retailers such as the famed jewellery retailer Tiffany & Co. 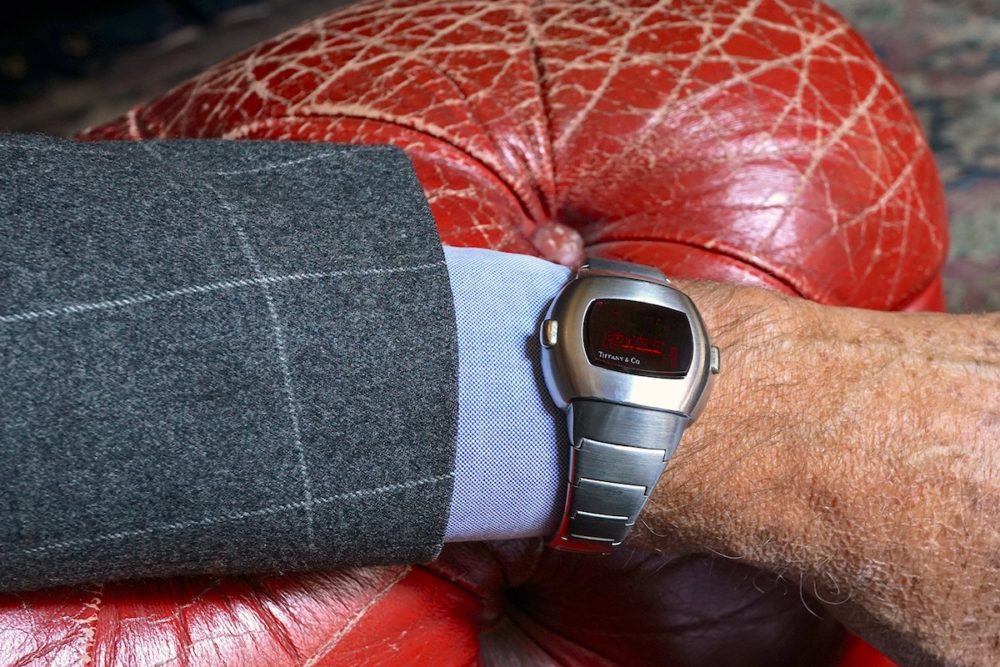 Mr Goldberger's Pulsar P3 on the wrist of the man himself (Image: John Goldberger)

Other than the signature, the watch holds sentimental value to Mr Goldberger as he explained to Revolution recently: “It was given by my father as a present for my 18th birthday in 1975. My father was an electronic engineer, he founded many high-tech companies in the ‘70s, and back from his business trip in the U.S.A., he presented to me the digital watch, purchased at Tiffany in New York. He was very proud of the present because for that time this watch was very advanced and innovative. Do not forget that the price in 1975 of a Pulsar was higher than that of a Rolex Submariner.”

The Pulsar P3 was the successor to the original P1 and P2 models and featured an added date function compared to time-only displays on the first two generations of the Pulsar. Setting the time was still done by applying an external magnet stored in the folding clasp of the bracelet, and the case design featured a more rounded shape compared to the P1 and P2.

Another thing to note is that the logo Pulsar — or Tiffany & Co. in this case — was stamped on the red mineral crystal as opposed to the case’s surface on previous generations. Mr Goldberger being such a cool gentleman, it comes as no surprise that he would also possess such a cool watch that marked quite an important milestone in watch history.

Entering the ’70s, it was clear that the United States had won the coveted “Space Race” with the success of the Apollo 11 mission which landed humans on the Moon in July of 1969. Only 10 months after that historical achievement, in May of 1970, another American company would make an announcement and reveal a ground-breaking product unlike anything that had been seen before: the Hamilton Pulsar, the very first digital wristwatch.

This “solid state wrist computer” seemed like an object straight out of science fiction and perfectly in sync in terms of design with the Space Age period that the world was experiencing. With no moving parts, no ticking sound, unmatched durability and accuracy, this was something no one had ever seen before. At the push of a button, red LED numerals would light up the dark screen displaying the time. Holding the button for longer revealed the passing seconds.

What followed was an undeniable Pulsar fever. In 1972, Hamilton released a consumer-ready version of the Pulsar, the Hamilton Pulsar P1 with an avant-garde cushion case and bracelet in 18ct yellow gold, but the product just flew off the shelves. It was the first true star of the emerging Quartz Era and a completely unheard of in a universe dominated by mechanical analog watches.

Celebrities couldn’t get enough of it and names like Elvis Presley, the Shah of Iran, Emperor Haile Selassie of Ethiopia, Sammy Davis Jr, and Yul Brynner are some of the famous owners of the Hamilton Pulsar.

In 1973, the Hamilton Pulsar P2 in stainless steel reached the market at a more affordable price, achieving colossal success. The P2 rapidly became the period’s must-have watch, with wearers including Keith Richards, Jack Nicholson, Peter Sellers, Elton John, Gianni Agnelli, and U.S. President Gerald Ford. Notably, Roger Moore’s James Bond wore one in Live and Let Die (1973) and the boxing great “Smokin” Joe Frazier was even pictured wearing his in the run-up to his 1973 fight with Joe Bugner.

The New Hamilton PSR, Available for Pre-Order on Revolution and The Rake

Nearly 50 years on today, Hamilton is announcing the return of the Pulsar in a modern day reincarnation with all of its 70s charm. The 2020 Pulsar will come in a stainless steel version and a second one in steel but coated with yellow gold PVD, which will be produced in a limited run of 1970 pieces.

The Hamilton PSR is an identical re-issue of the Hamilton Pulsar P2 and retains the beautiful avant-garde and Space Age design that made its success half a century ago. The watch has caught up with its time by using a hybrid display mixing reflective LCD (Liquid Crystal Display) and emissive OLED (Organic Light Emitting Diodes) technologies. This module was developed in-house by Hamilton together with Swatch Group’s R&D department to keep the essence of the original watch alive without compromising functionality.

You still get the cool effect of the light red OLED numerals showing up in their famous “digit dot” style when pressing the button on the side, but thanks to the reflective technology in the LCD display, the time is now permanently visible in daylight conditions. This hybrid display technology means that the watch has an extremely low energy consumption.

We are happy and proud to offer these watches to our readers and clients who will undoubtedly appreciate this reborn icon of the watch industry. You’re not only getting a well crafted watch with space-age style still relevant today, you’re also buying a reminder of pioneering changes in technology and society. The Hamilton Pulsar was the epitome of cool in the 1970s and certainly retains this cool factor 50 years on.