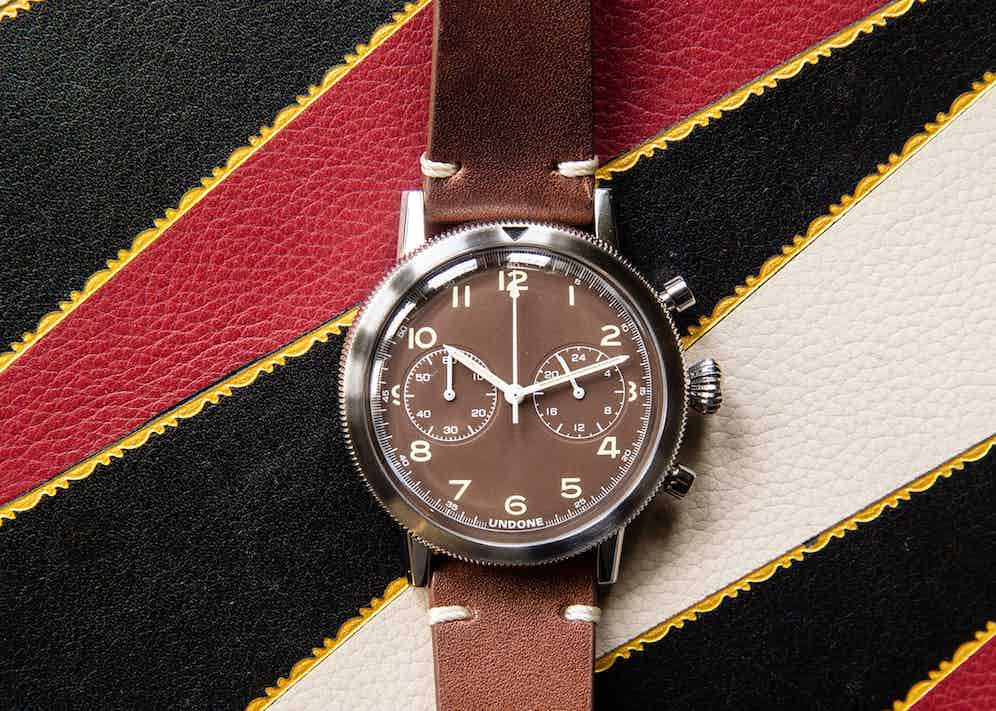 TL;DR: To say it in a few words, when the UNDONE Type 20 Classic Flyback Chronograph launched on our shop, we were so impressed by the quality that the USD298 watch presents, not to mention the positive remarks we received from you, our readers, and several noteworthy vintage Type 20 collectors, that we were moved to work with UNDONE on a limited edition project.

Therein the watch that we chose to create, is a recreation of one that takes on the spirit of a vintage Breguet Type XX Ref:5101/54 with a sterile degradébrown tropical dial or the brown dial pièce unique that Breguet created for the Only Watch 2019 auction that sold for CHF 210,000. Ladies and gentlemen, with that in mind, we give you the USD325, 300-piece limited edition, UNDONE Tropical Dial Type 20 for The Rake & Revolution.

It’s fair to ask here, why does our limited edition cost more than UNDONE’s regular Type 20? Here why: As part of our annual partnership with the Distinguished Gentleman’s Ride (DGR), we’re committing to donate USD50 from the sale of each of our Tropical Dial Type 20 to the DGR’s 2020 fund raising effort.

Among military watch enthusiasts, there are numerous hero pieces. Most famous are the 12 time-only-with-small-seconds W.W.W. watches commissioned by the British Ministry of Defence, and now known as the “Dirty Dozen”. 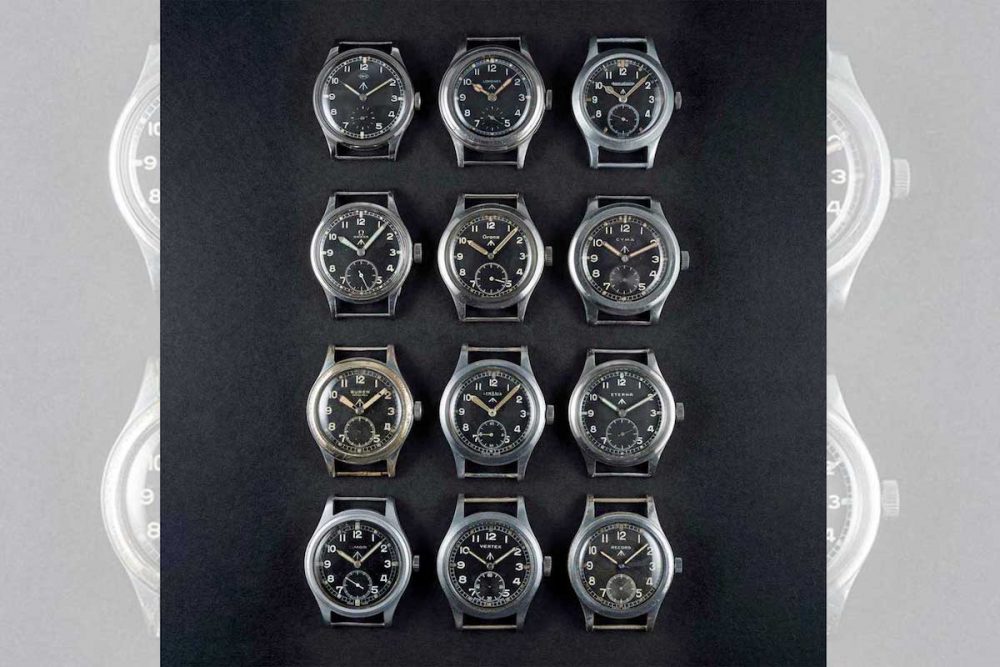 There are also the various military issued Submariners, from both sides of the Wilsdorf household, all of which are now commanding astronomical figures. Or Blancpain’s Tornek-Rayville watches that are now completely untouchable. That is if you can find one in half decent condition.

But among the most desirable, with hardly a dip in popularity or value since the watch industry’s revival began in the 1980s, are the French Aéronavale chronographs, best exemplified by the Breguet Type XX. 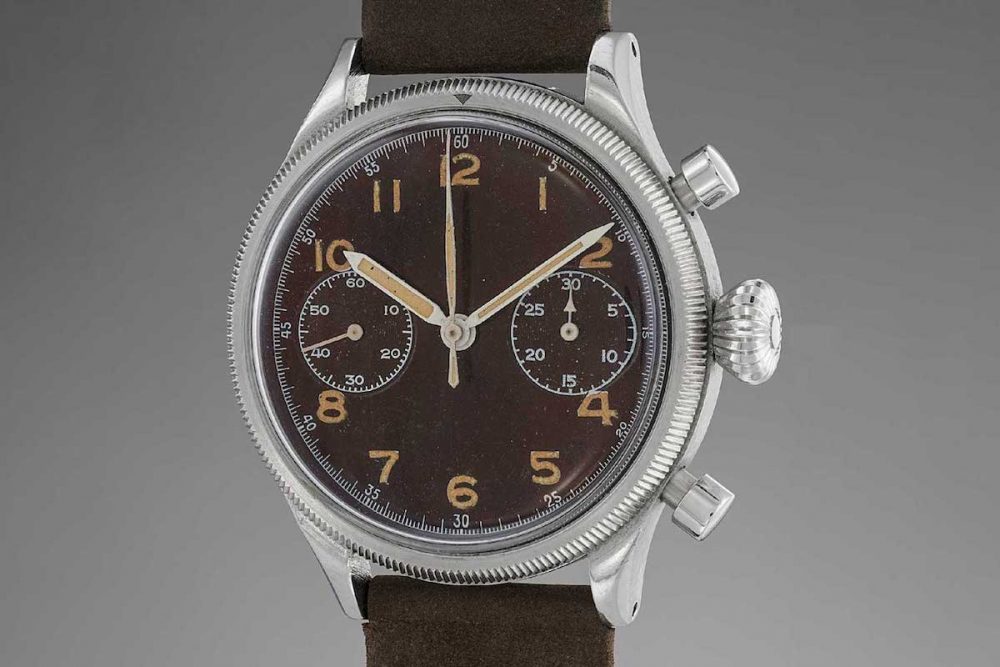 A Breguet Type XX Ref 5101/54 with sterile degrade brown tropical dial offered by Phillips Watches in 2019; sold for CHF 27,500, according to Breguet this instance was delivered the French Airforce in June 1955 (Image: phillipswatches.com)

A bit about nomenclature before proceeding: only Breguet uses Roman numerals to identify its versions, and yet the company never featured it on the dials. Everyone else used the Arabic “Type 20” (and later Dodane’s and Seliva’s “Type 21”), many makers printing this on the dial above the 6 and one or two placing it below the company name at 12.

Although a post-war design, visually the Type 20 owes much of its layout to Second World War chronographs made by Hanhart, Tutima, Glashütte and others for the Luftwaffe. Mainly with two registers and two pushers, these watches featured white numerals against black dials, a 60-second counter at 9 o’clock, a 30-minute counter at 3 and oversized hands on the latter sub dial. Most also featured fluted rotating bezels with a single marker to help indicate elapsed time.

In 1954, the Type 20 chronographs were commissioned by the French government for the French Air Force, the CEV (Centre d’Essai en Vol) — the country’s state-sanctioned flight testing centre — and most famously for the Aéronautique navale, a.k.a. “Aéronavale.” The air arm of the French Navy, it was created in 1912 at the birth of aviation and it is active to this day, with carrier squadrons and a naval patrol air force.

In fact, the term “type 20” wasn’t one that the watchmakers came up with, rather it was the standard by which the French military had commissioned the watch to the several watchmakers who took it on.

Given that the watches were, however, issued to three separate arms of the French military, engravings were made on the back of the watches to distinguish one from the other. But that’s a whole other — extensive — point of interest.

The earliest Type 20s delivered are known to have what is termed the sterile black dial. That is to say these were devoid of any branding from the watchmaker, with only functional markings on the dial. When authenticated, these unmarked dials make for some of the most sought after examples of the Type 20.

Specifications for a Type 20 included an instantaneous flyback function, reliable stop-start function for at least 300 operations, variation of no more than 8 seconds over 24 hours and a power reserve of 35 hours. From there onward, the variants were numerous.

Unlike the Dirty Dozen, which differed only in minor details but were otherwise functionally and visually interchangeable, Type 20s were issued with two or three sub-dials, assorted rotating bezels including engraved, painted and unmarked fluted or reeded types, differing hand shapes, a multitude of crown sizes or shapes and other distinguishing features. And that’s just the Breguets.

Along with Breguet, the other Type 20 manufacturers consisted of Airain, Auricoste, Dodane, Mathey Tissot, Seliva Chronofixe and Vixa. Allegedly, another company – Bouiller – was licensed as well, but this is unconfirmed.

Of the seven, Breguet, Auricoste, Dodane and Mathey Tissot still exist, and the first three of that quartet offer modern versions of the Type 20 or 21, with varying degrees of resemblance to the originals.

Read more about the history of the Type 20, here. 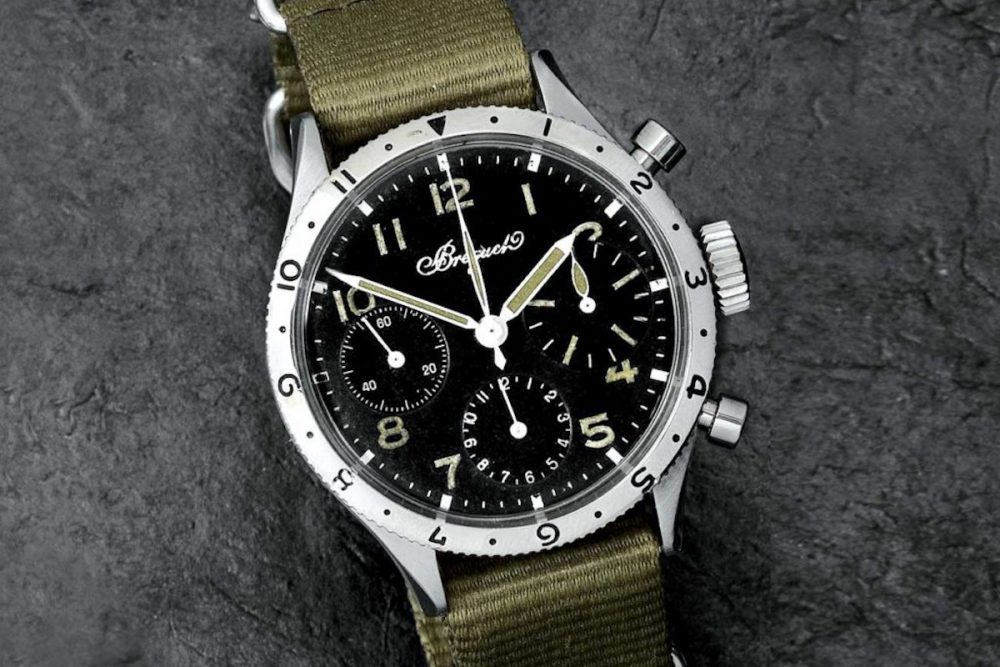 A fine example of the of the three sub-dial, CEV Breguet Type XX on an anachrostic strap.

Focusing in on what is accepted as the original look of the type 20 — branding of devoid, bi-compax flyback chronograph, onion crown, prominent round punishers and fluted bezel — they aren’t all that many options presently available to buy.

If you’re in the market for a vintage Type 20, or specifically a military issued Breguet Type XX, you are looking to play in the big kids’ sandbox. The last better known instance of one was sold with Phillips Watches, at their May 2019 Geneva Watch Auction: NINE. This example that had all of the desirables, with the added sex-appeal of a very attractively aged tropical dial, went for CHF27,500. The watch was also backed by Breguet’s archives for authenticity.

Those looking for the reliability of a more recently produced watch from Breguet that bears all of these early hallmarks, you’re out of luck. Because that would’ve been the watch that Breguet made for Only Watch in 2019. A universally lauded one-off piece, which secured CHF210,000 for the charity auction.

Now, with all of that said: We’d like to offer you the opportunity to get your hands on a modern day take on the Breguet Type XX Ref:5101/54 with a sterile degradé brown tropical, that is aesthetically true to the original and at a price point that’s unheard of in our domain. This is the UNDONE Tropical Dial Type 20 for The Rake & Revolution.

It has all of the necessary and desirable hallmarks. But where’s the catch? And who is UNDONE? UNDONE is a Hong Kong based watch company founded by Michael Young in 2014. Young initiated his first offering in 2016, via Kickstarter with his Urban Vintage collection. Starting at USD175, with a digital customisation tool in place from the get go, not to mention the quarter million US dollars raised (HKD1,960,430), Young clearly had something on hand that a brand could be built around.

Today, UNDONE stands as a watch company with four collections under its belt, a high level of approval from the tool watch collector community and several notable collaboration watches —including one with our friends from Fratello Watches. 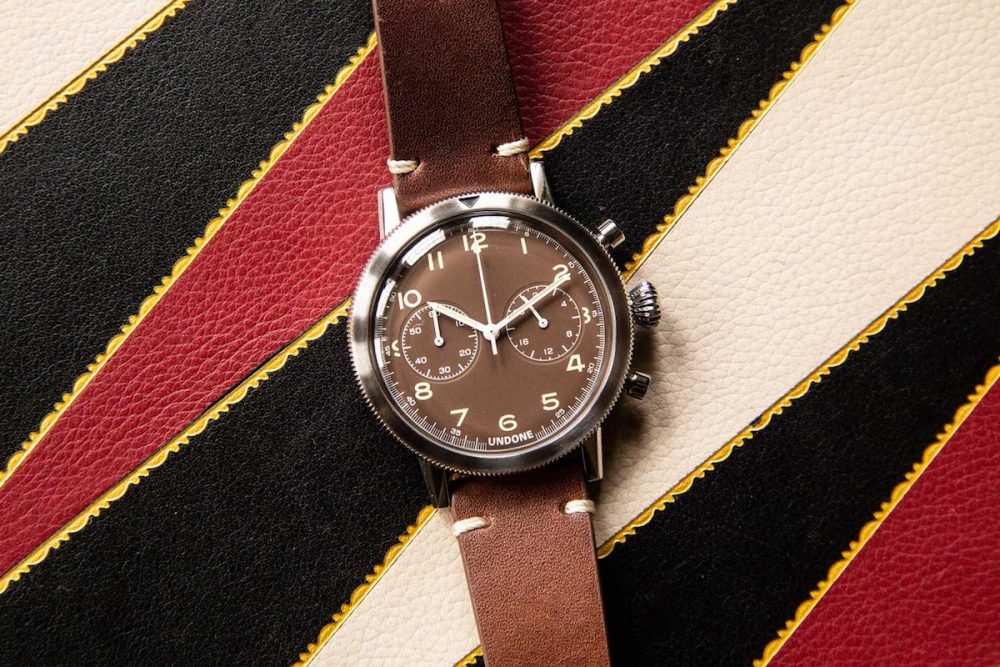 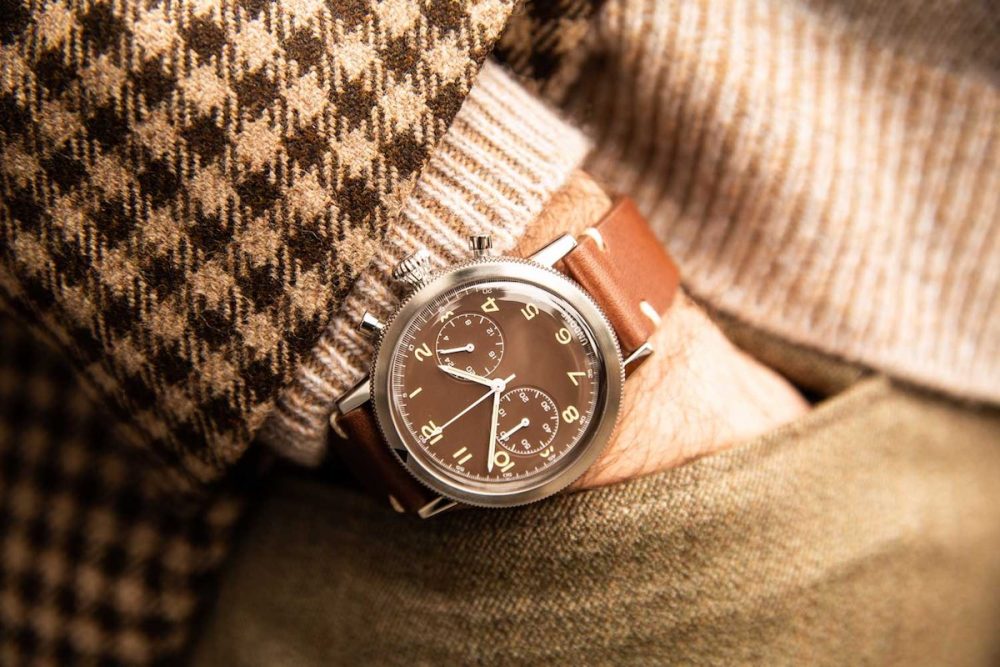 The catch for our Tropical Dial Type 20 and its USD325 price tag is simply this: that it’s powered by a mecha-quartz movement. Specifically the Seiko Instruments Inc. VK64 Mechanical-Quartz Hybrid Flyback Chronograph. If that bothers you, then that’s that. But for the rest of us, a great watch at an incredibly accessible price.

Says Wei Koh, founder of The Rake & Revolution, “I have to say, I’m blown away by how UNDONE is able to deliver such quality for a three hundred-something dollar watch. The case is made from 316L stainless steel like those made by the majority of the luxury watch industry. The crystal is a hardened Dome K1 variety. The movement is a Seiko VK64 mechanical quartz movement. UNDONE has configured the movement so you have a 24-hour indicator at 3 o’clock and a 60-minute chrono counter at 9 o’clock. Why? So that there is no quartz ticking seconds hand.”

We’d also like to remind you of the charitable aspect that we’ve purpose behind the watch. That for every watch sold, we will be donating USD50 towards the Distinguished Gentleman’s Ride 2020 fund raising effort. We’re sure this is a watch you will enjoy and do so while doing your part to help raise awareness towards men’s mental health, particularly in 2020 when the world as we know it, has surely changed forever. 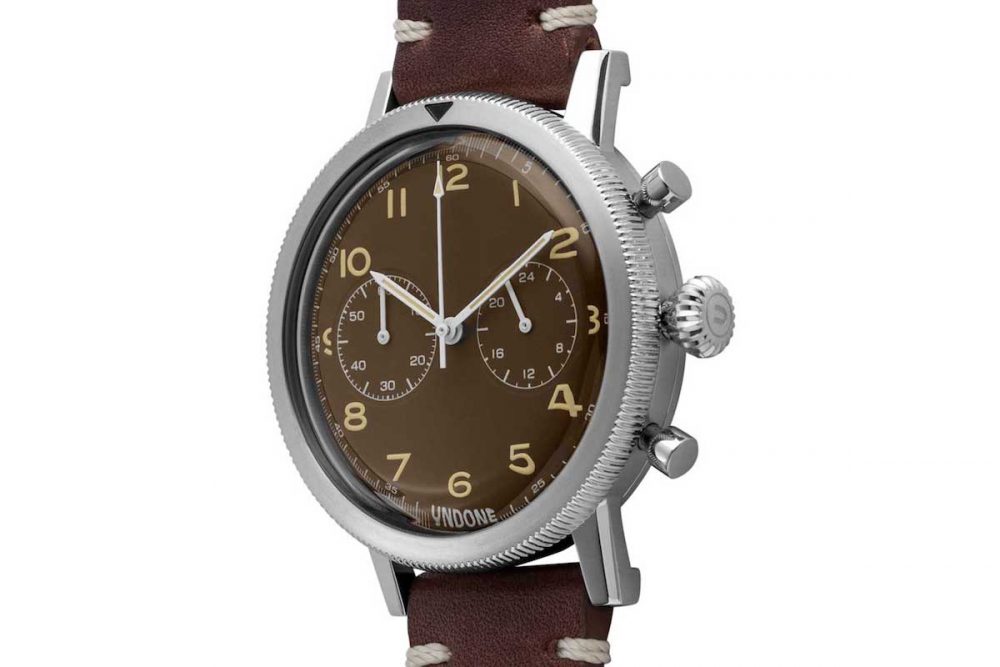