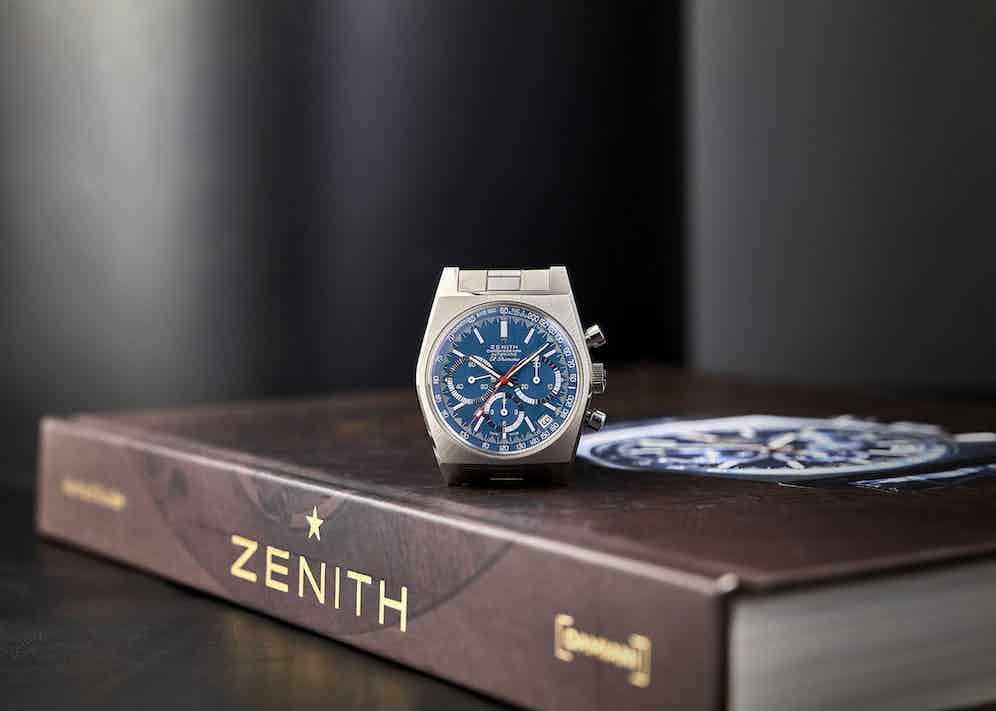 OK, so maybe at 78.2 grams as opposed to 2020’s steel watch at 110.6 grams, with a total weight savings of 32.4 grams, our latest collaboration is not the most featherweight timepiece in the world when compared, for example, to such horological exotica like the Richard Mille RM 027. But what I can say is that it is the lightest watch with a full metal bracelet that I’ve ever strapped on. And that is what is so cool about the Airweight Cover Girl. It looks like it would possess substantial heft on the wrist until you put it on, and you have a genuine “Oh shit, that’s light” moment, and that’s the very appealing dynamic contrast between how the watch looks and how it wears. This is probably aided considerably by the Gay Frères designed, ladder-style bracelet which, of course, omits every other traditional center link. This watch is also immediately distinguished from our 2020 Chronomaster Revival limited edition of 100 watches by the appearance of polished center links. 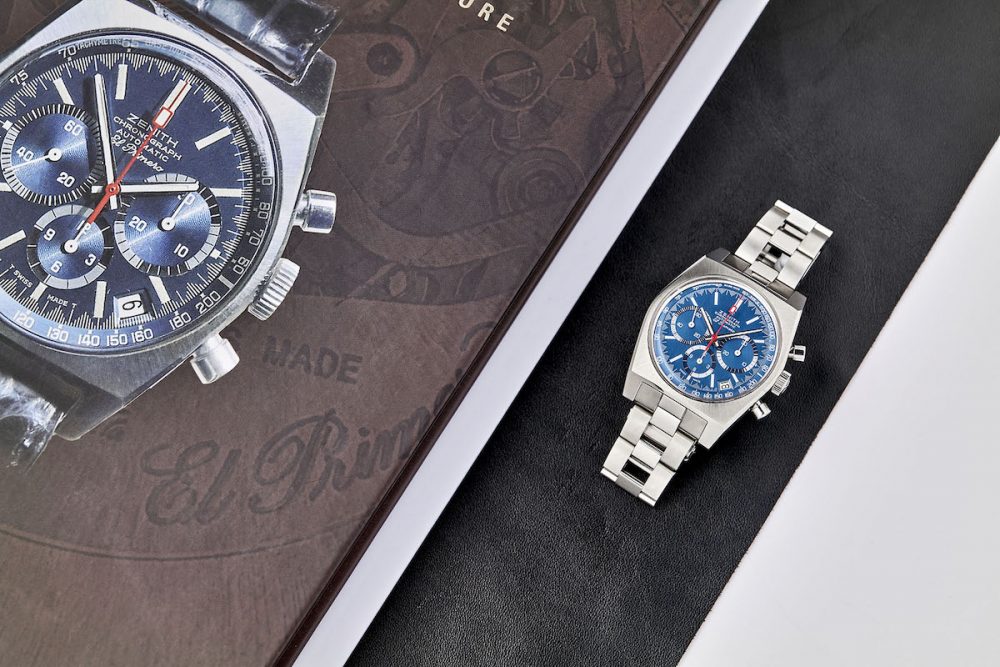 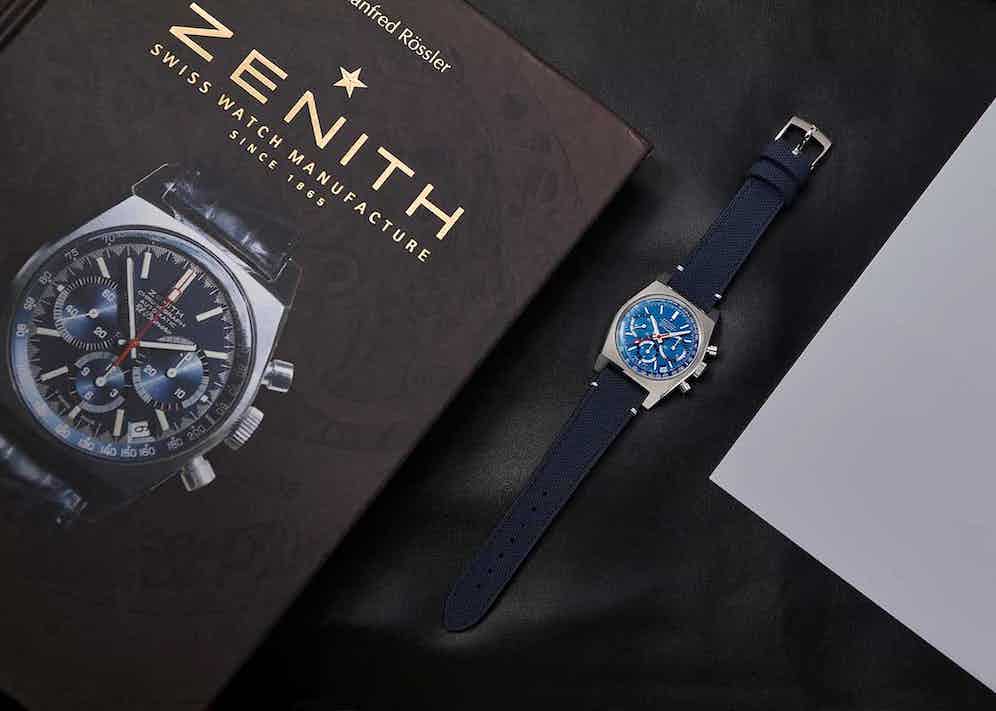 Why did we do this? Partially because we wanted to give the wearer a visual clue that we’ve used grade 5 titanium for both the case of the watch and the ladder bracelet. Grade 5 titanium is the only quality of titanium that can be mirror polished in this way, and it is the material selected for serious horological finery from brands such as De Bethune. Romain Marietta, Zenith’s dynamic director of product development and heritage, actually experimented with many different levels of polish for the ladder bracelet, but in the end we decided on just the center links. He explains, “I think this adds a beautiful sense of contrast with the brushed finishes and makes for a truly stunning watch. The polished center links perfectly complement elements like the polished bevels of the watch, and the play over the light of these surfaces is amazing. At the same time, we wanted to use a slightly more aggressive brushing, so if you look at the sunray brush strokes in the case of the watch, they really stand out in direct light. We took our time to develop the perfect evolution to 2020’s Revival.”

As a testament to both Marietta and Zenith CEO Julien Tornare’s commitment to innovation, neither balked at the idea of creating Zenith’s very first full grade 5 titanium ladder bracelet for our collaboration. Says Tornare, “At Zenith, our tradition has always been to push boundaries as we did all the way back in 1969 with the introduction of the world’s first integrated automatic chronograph movement. We had used titanium for some of our A386 style cases such as our Chronomaster ‘Shadow’ limited edition but, so far, not yet in a bracelet. But we thought this would be the perfect time to try it. We love to work on limited editions that are ambitious and bring something of real value to collectors. I have to say this watch is simply amazing and though we’ve made 250 pieces this time, I think it won’t be anywhere close to enough” 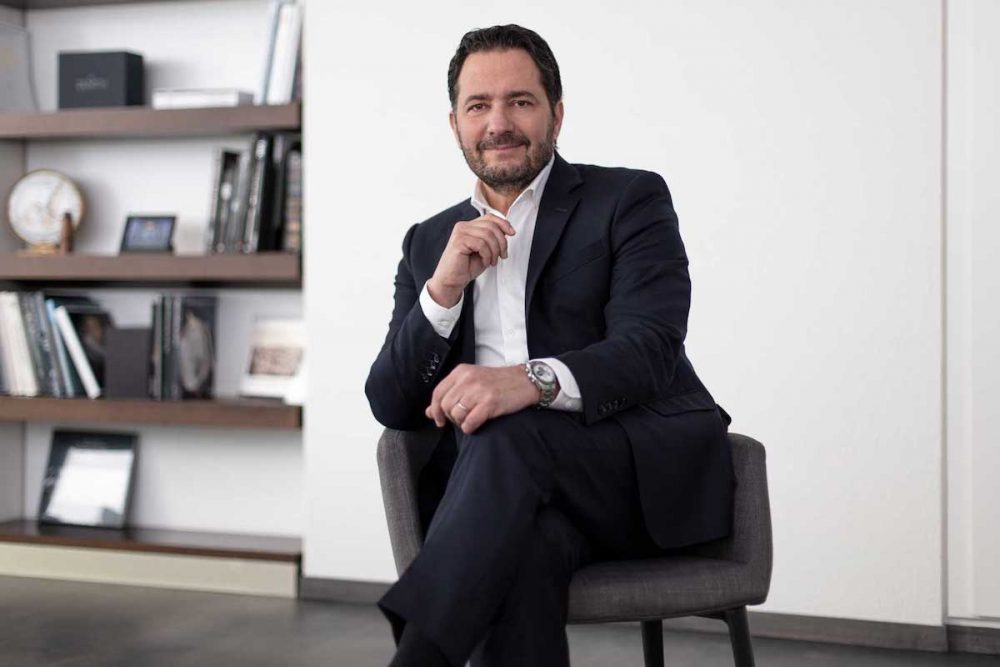 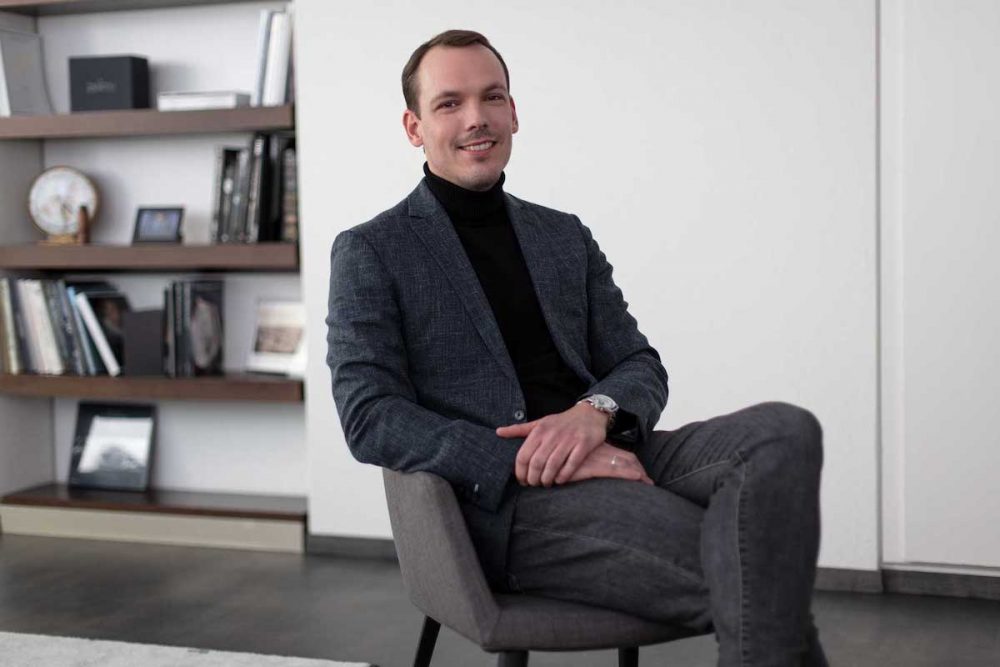 Speaking to Tornare reminds me of the launch of our Chronomaster Revival A3818 “Cover Girl” in 2020, which was the last watch event we attended before COVID changed our lives forever. We had all flown to Miami — Tornare from Le Locle, Switzerland, and myself from Singapore. We had reunited with hugs, slightly bleary eyed from the long trip. I asked Tornare, “Can I see the watch? I hear it’s amazing.”

To which he replied, “Wei, I thought you were bringing the watch.” Which resulted in us both realizing that the watch was, in fact, sitting on Romain Marietta’s desk in Le Locle. Amusingly, we had thought of everything for the event except actually bringing the prototype with us. To Tornare’s credit, and as a sign of his extraordinary resilience, he said, “It’s OK, we will explain the watch in detail, we will give everyone a lot to drink, and I am sure we will sell all 100 pieces by the end of the night.” 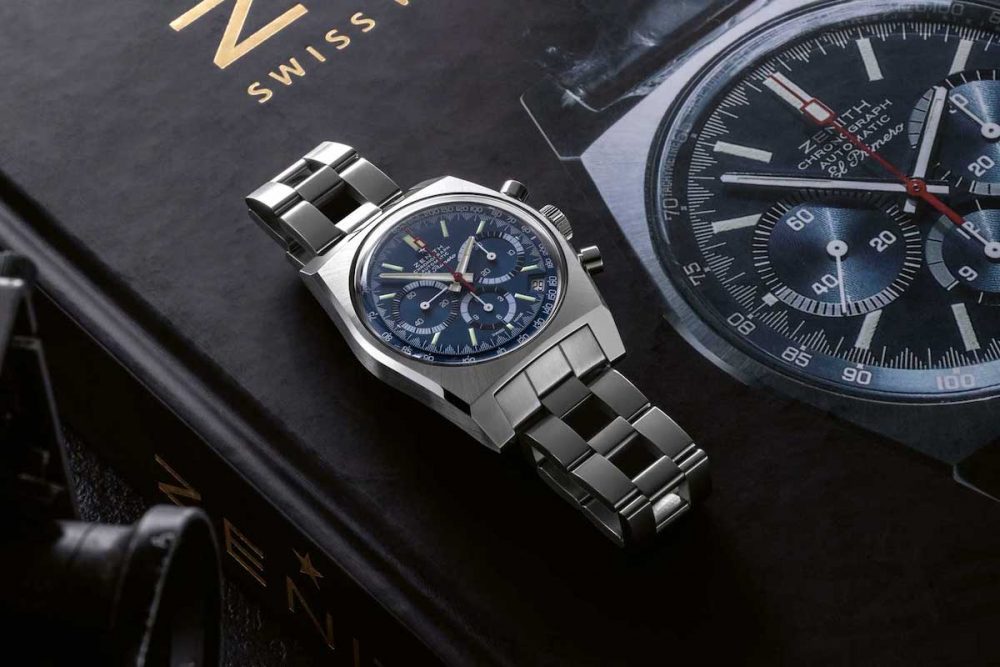 Available in a limited edition of 100 pieces, the 2020 Zenith × Revolution Chronomaster Revival ref. A3818 “Cover Girl” in stainless steel was the first of our limited editions created with Zenith, inspired by the original 1971 Zenith El Primero ref. A3818 (Image: Revolution©)

And the amazing thing was, he was right. So pent up was the desire from the collector community for a modern version of the A3818 aka the legendary “Cover Girl,” bestowed with this sobriquet from its appearance on the front of Manfred Rossler’s seminal book on Zenith, that once released, our watch sold very quickly online and at the event. So much so that an hour into the party, Tornare and I both toasted over the fact that every piece was spoken for. Each time someone asked to see the prototype of the watch, I would mumble something along the lines that it was probably with collectors on the other side of the room in Miami’s ultra cool Supercar Gallery. One funny thing that happened was, at the end of the night, my friend and vintage dealer extraordinaire Eric Wind showed up wearing a perfect vintage NOS (new old stock) A3818 on his wrist. He took it off to show it to me and, just then, two collectors walked by. Asking to see it, they mistook the watch for our new Revival and remarked, “Wow, it looks just like the original.” 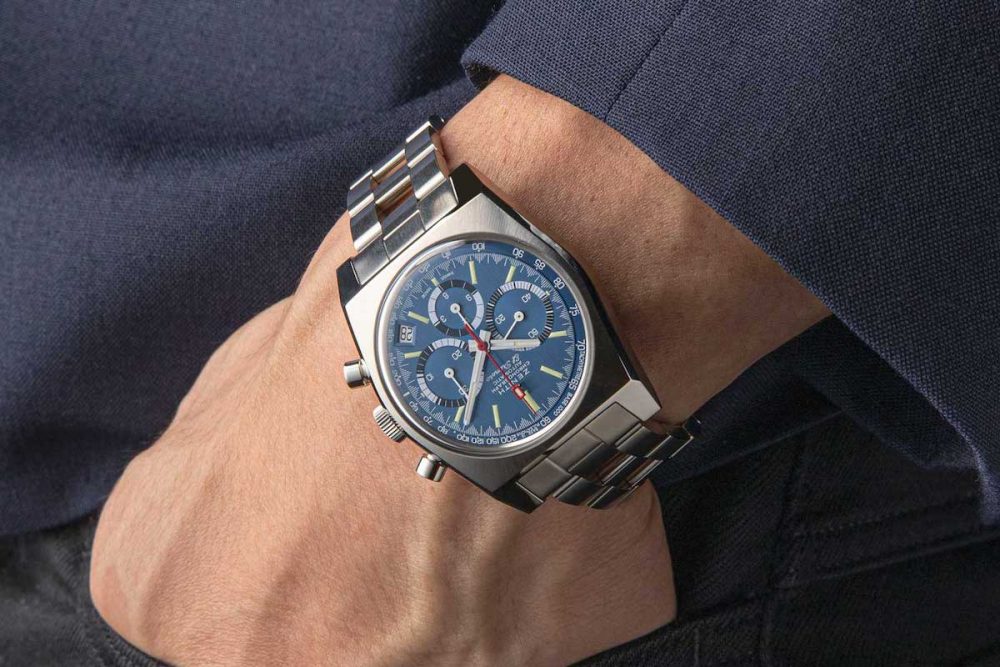 Our “Cover Girl” Revival does very well on the secondary market. The prototype of this watch was donated by Zenith to our COVID-19 Solidarity Auction and it achieved USD 20,000 (Image: Revolution©)

Which brings up a good point. Our Revival from 2020 was not exactly like the original. Says Tornare, “We agreed that even though we were making an homage to a legendary watch and the single most valuable vintage Zenith chronograph on the market, we would not just make a facsimile of it. So, even though we went through a lot of effort to get the Superman Blue right and even the color of the Super-LumiNova to echo that of aged vintage tritium found on the original watch, we wanted to add a cool element that would immediately distinguish the new watch from a vintage one.”

Says Marietta, “We decided to make every single indicator on the Superman Blue dial luminous. Yes, that means every one of the marks on the ‘shark tooth’ scale, every indication in the pulsometer and tachymeter, all the subdials and even the hands on the subdials. Because some of these indexes are so small, it took a lot of trial and error to get this exactly right, but we managed it. If you shine a UV light on the Cover Girl Revival, the effect is amazing as you see this incredible luminous light display.”

Says Tornare, “I liked that this was immediately visible in daylight and something that the 100 owners of that watch get to keep as a secret for themselves.” 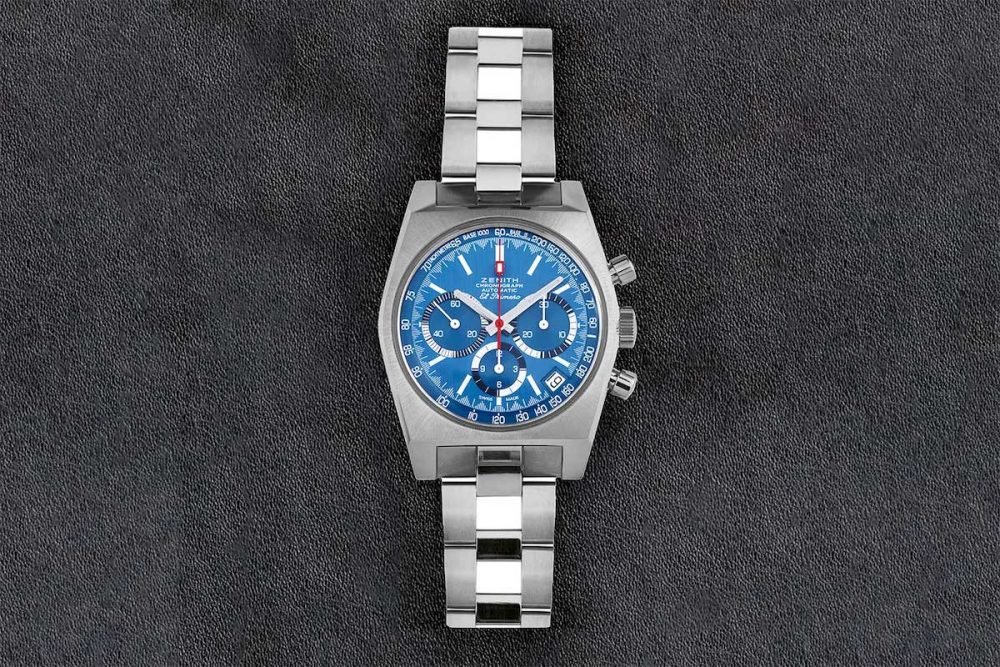 The Zenith × Revolution & The Rake Chronomaster Revival A3818 “The Airweight Cover Girl” is a limited edition of 250 pieces, with its case and bracelet in grade 5 titanium (Image: Revolution©)

What exactly is the Cover Girl? Well, in 1969, Zenith presented the El Primero movement, the Swiss industry’s first integrated automatic chronograph movement vibrating at a blistering 5Hz. The movement was housed in two different style cases: a round model designated the A386, and two barrel or tonneau shaped models dubbed the A384 and A385. In 1971, Zenith debuted an execution of the A385 that was destined to become a legend. That watch named the A3818 featured the barrel case and an integrated ladder style bracelet created for Zenith by the most famous bracelet maker of the era, Gay Frères. It was also characterized by a vibrant Superman Blue dial featuring vertical brushing, a “shark tooth” racing track that ran around the perimeter and a super cool pulsometer and tachymeter. The scale worked such that you could read your pulse in 15 beats, and thereafter it was transformed into a tachymeter. Having played around with this quite a bit, I can report that the scale performs flawlessly for both purposes. Finally, the chronograph seconds hand was stoplight red and featured a small luminous paddle on it. The overall effect was to create one of the most unique and stylish sports chronographs of all time. Over the last half century, the Cover Girl has become the single most coveted vintage Zenith chronograph and examples of this watch now trade just under 30 thousand US dollars. 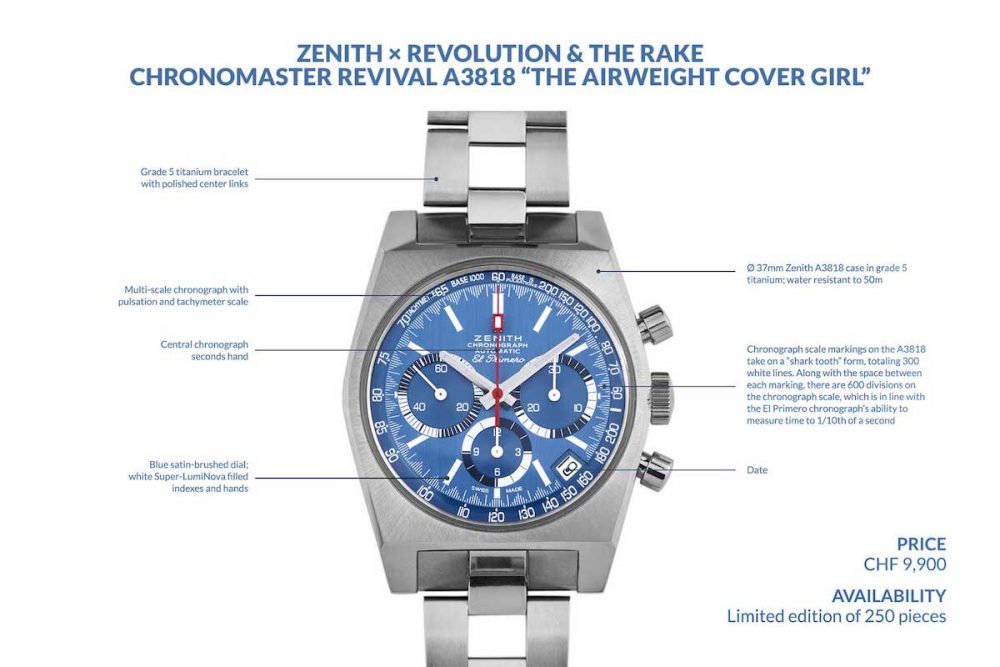 Zenith A3818 “The Airweight Cover Girl” for Revolution & The Rake 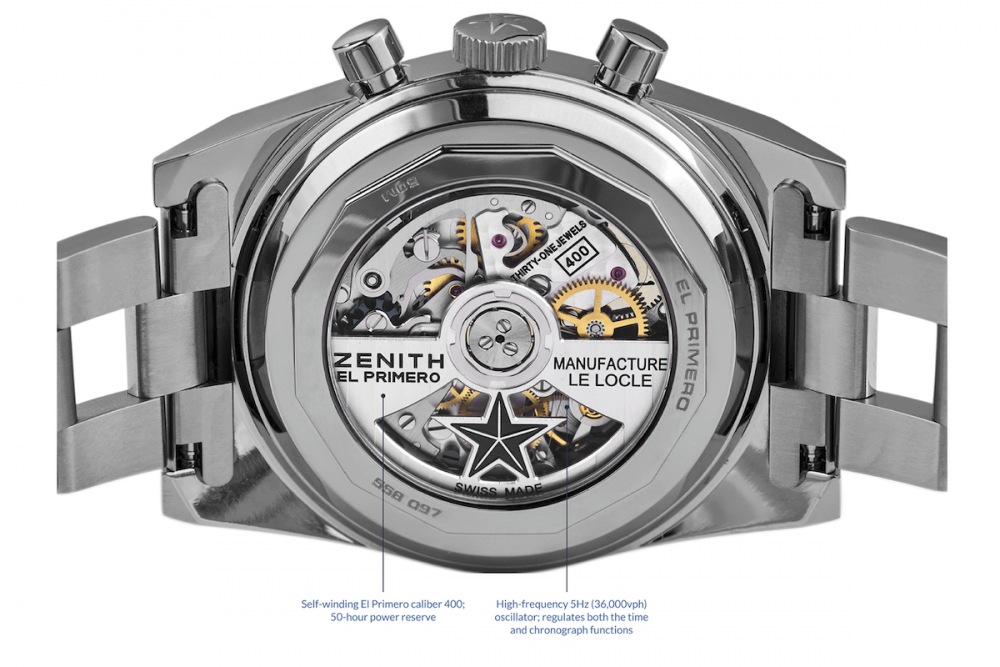 Although Tornare, Marietta and I had collaborated on a Cover Girl Revival in 2020, we all recognized that 2021, which marks the 50th anniversary of this iconic model, would have to be a year we pulled out all the stops. As a follow-up to the steel watch with a fully luminous dial, we decided to pursue the direction of material innovation to create an even more wearable watch. We actually experimented with stealth versions of the watch, which included a fully sandblasted version. But in the end, we wanted to stick to the look of the original watch for the 50th anniversary and — spoiler alert — keep the more extreme version for a future follow-up. 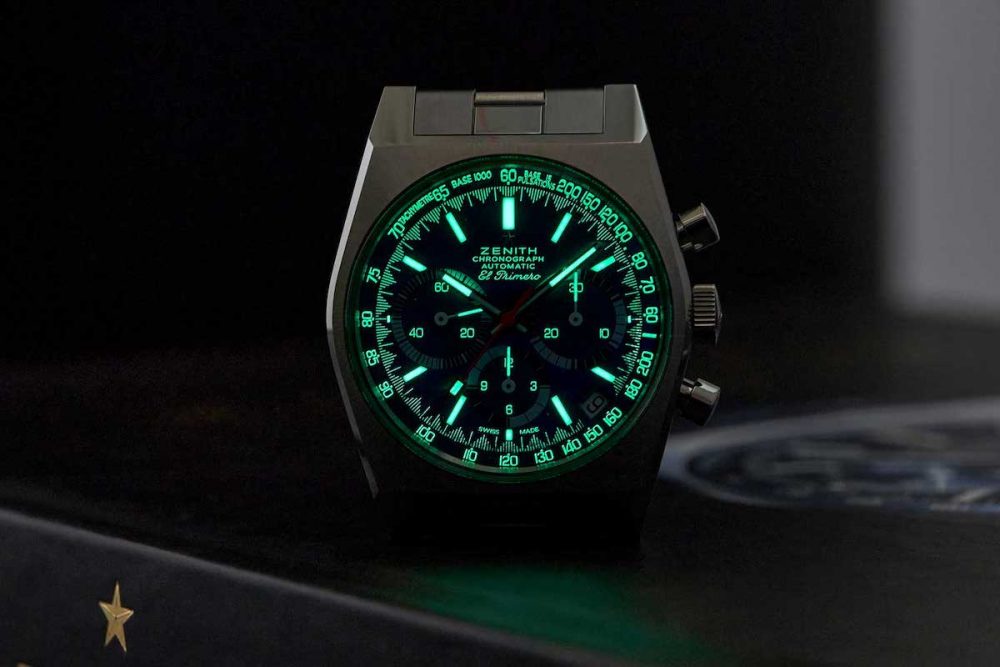 The Chronograph scale markings on the A3818 take on a “shark tooth” form, totaling 300 white lines. Along with the space between each marking, there are 600 divisions on the chronograph scale, which is in line with the El Primero chronograph’s ability to measure time to 1/10th of a second. The scale itself makes for an unusual combination of a pulsation and tachymeter scale, all of which are treated with lume for an incredible luminous light display (Image: Revolution©) 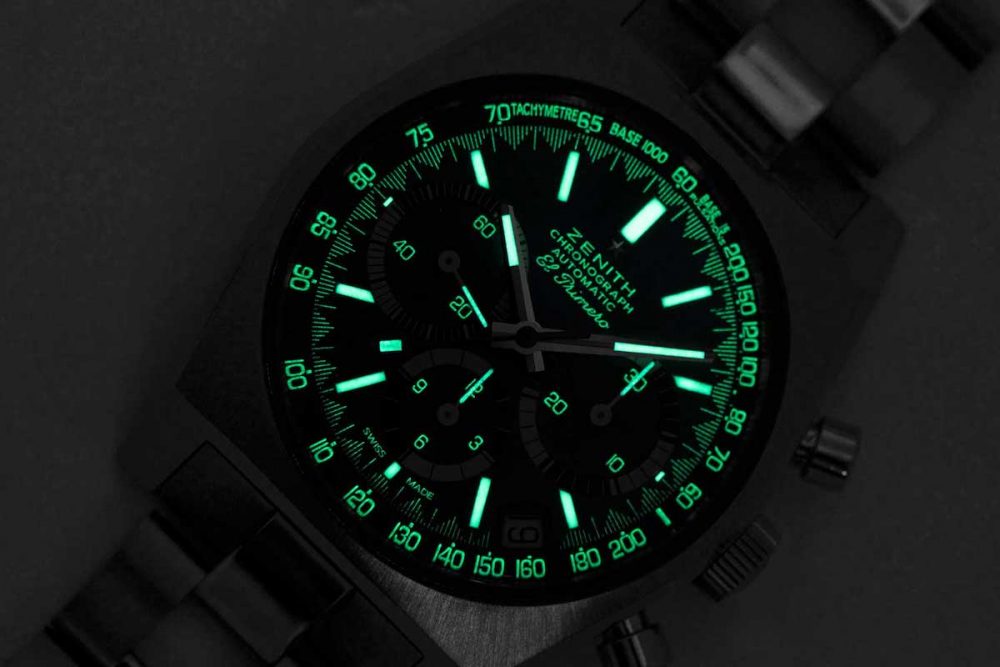 Says Marrieta, “Once we established the watch would be in grade 5 titanium, we had to ensure that the finish of the watch was at the same level as the original, and that took some experimentation. At the same time, as I mentioned, the desire was to subtly improve the decoration.” We decided to make a larger number of watches this time at 250 examples. Tornare explains, “We had something of a situation in 2020. There were a large number of unhappy customers that were frustrated that they couldn’t get the Cover Girl, and so this year we’ve made a larger allocation of the Airweight Cover Girl. But I fear we might have the same problem.” To further distinguish the new Airweight Cover Girl, we decided to also use pure white modern Super-LumiNova for the indexes as opposed to the vintage themed color from 2020. The result to me is wonderfully clean and elegant. Having worn the Airweight Cover Girl for the last couple of weeks, its lightness, the beauty of its finish and the faithfulness to Zenith’s iconic 50-year-old design have all combined to make it one of my all-time favorite watches. I hope those of you who get one of these will feel the same way. 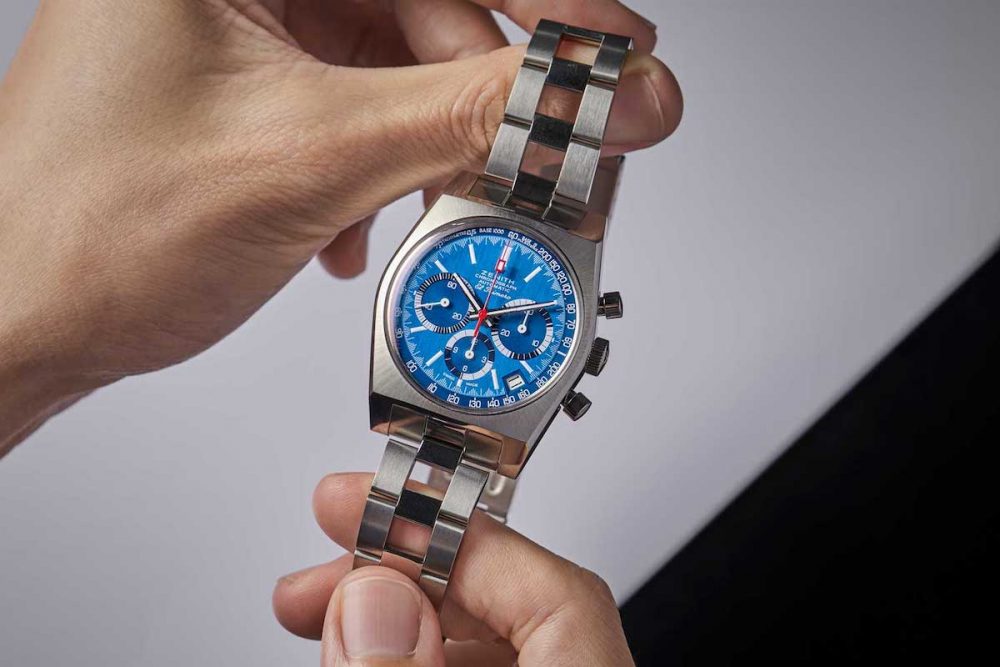 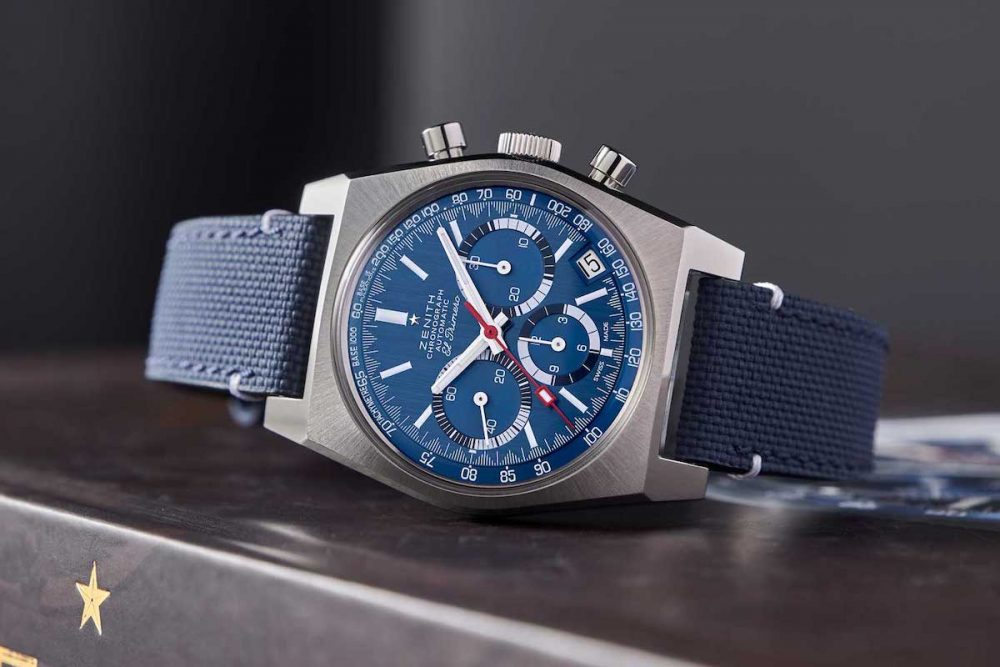 The Zenith × Revolution & The Rake Chronomaster Revival A3818 “The Airweight Cover Girl” in 250 examples will be offered at a price of CHF 9,900. 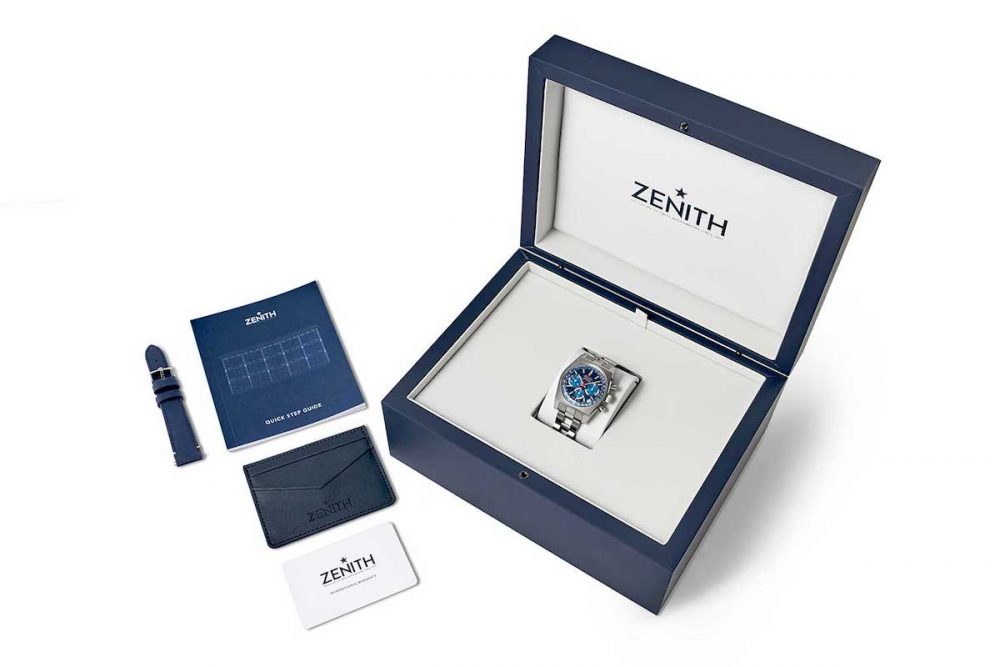 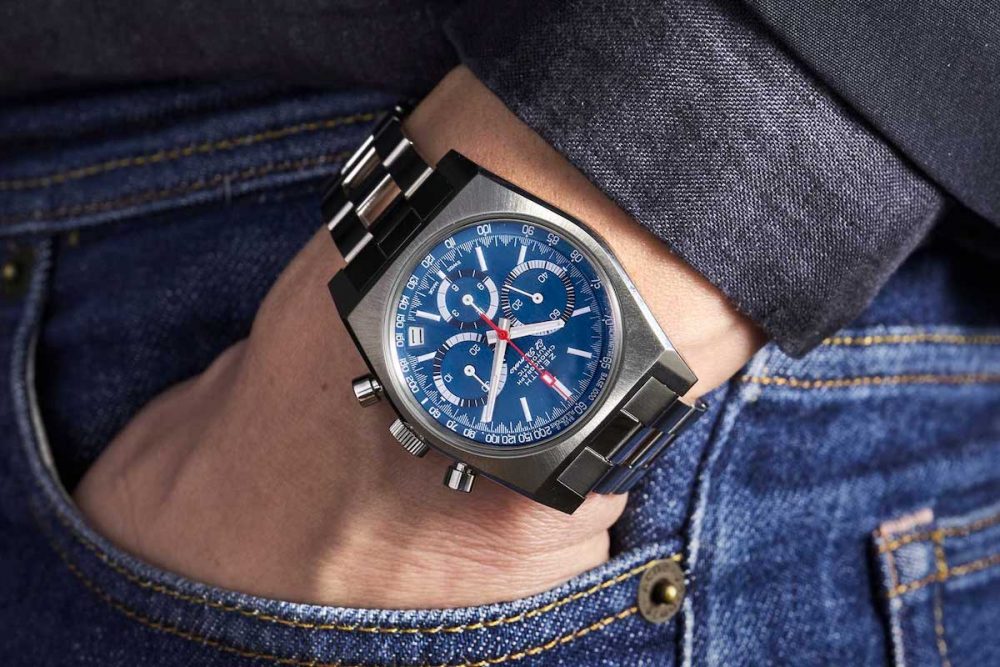 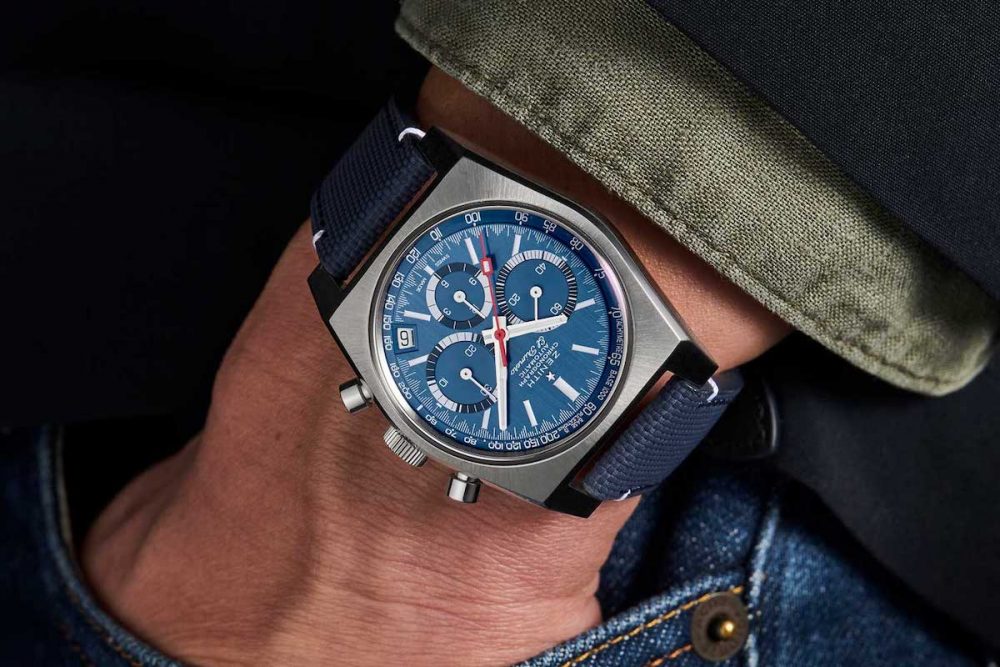