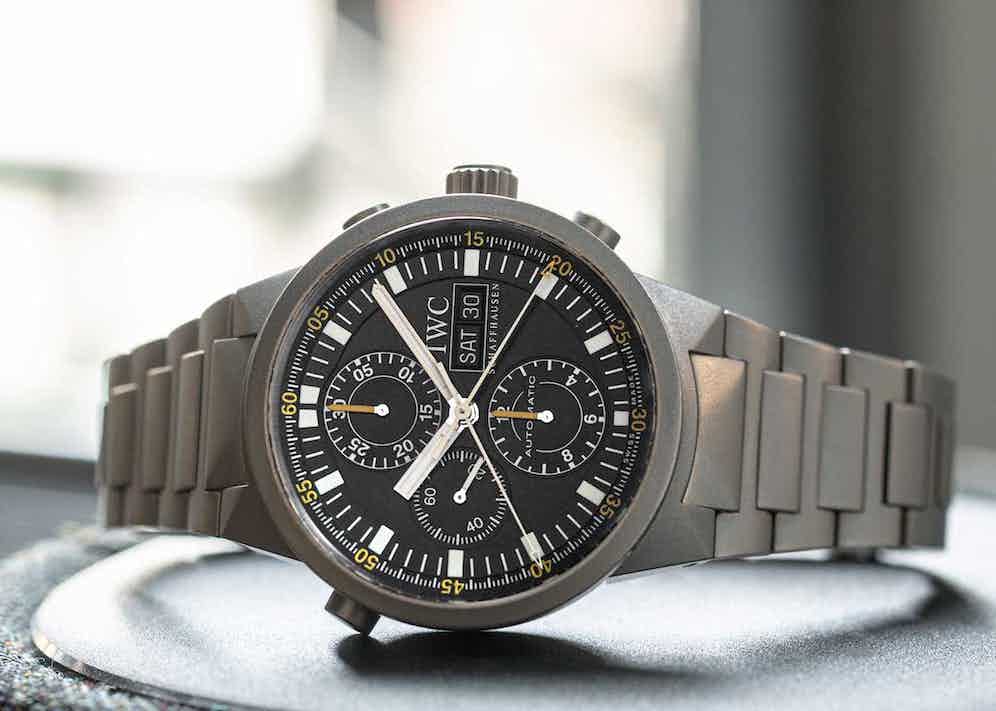 Close to super human in ability, in the watchmaking world there is one complication that gives mankind the greatest empowerment over time and that is the Split Seconds Chronograph. But hang on. A split seconds chronograph is not as name implies a timepiece that shatters the second down into fractions. Basically any chronograph beating from 2.5 Hertz good for 1/5th of a second to 5 Hertz, which divides down to 1/10th of a second will already achieve this for you. What a split second chronograph does it allows you to stop and record an intermediate time or lap time. And yes like a lot of the major accomplishments related to high watchmaking it came about from the aristocracy’s dissolute penchant for gambling. Specifically horse racing and the need to record lap times. 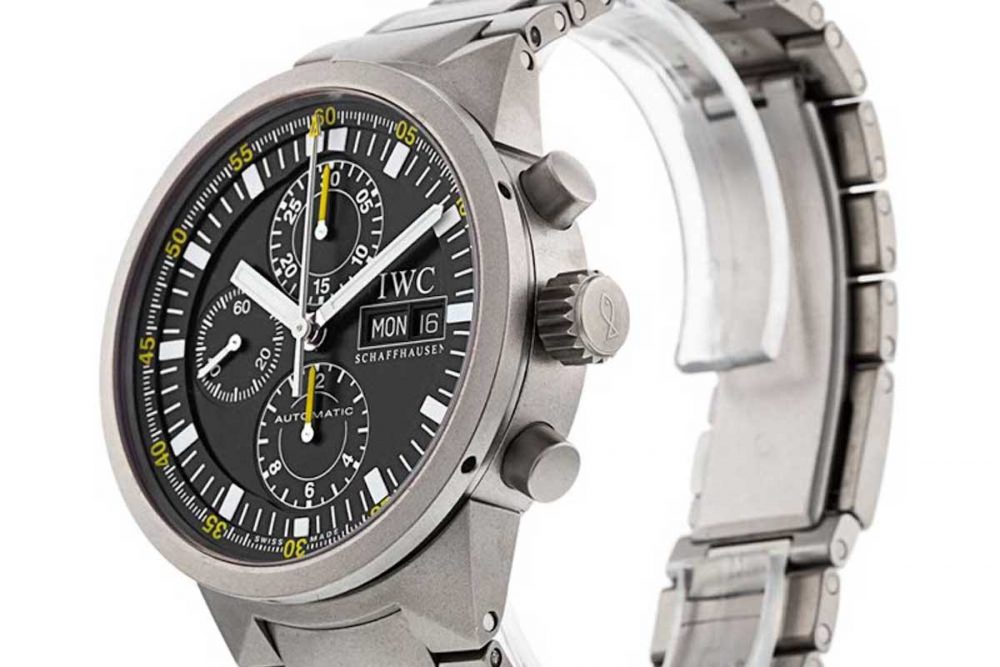 First Apart, Then Together Again

When the chronograph is activated the chronograph seconds hand starts to spin around the dial. In turn, it drives a minute counter, which in turn drives an hour counter (if one exists). So, on the dial side of a watch this means when you start the chronograph all this info gets set into action. When you stop it, checking the big seconds hand and where it sits relative to the small divisions on the dial will give you a reading of seconds and fractions of a second. The minute counter also called a totalizer will total the number of minutes that have elapsed. You get the picture. It’s a stopwatch function in your wristwatch.

But what if you’re a racecar driver or an aforementioned dissolute aristocratic gambler and you want to check the lap time of your car or horse without affecting the overall timing of the race. Well unless you had a separate stopwatch you’re shit out of luck. That was until the advent of the Split Seconds Chronograph, where there is a button either a pusher on the left side of the case or integrated into the crown. Want to record a lap time? Simply hit this button and you’ll see what you thought was a single chronograph seconds hand is actually two hands running together! Suddenly they’ll split apart like Jean Claude Van Damme’s legs between two semis. The split second hand stops so you can record the lap time while the chronograph seconds hand keeps on truckin’. Hit the button again and they jump back together without missing a beat. This action, one of the visually coolest in all watchmaking, is what provides this complication with its evocative Gallic sobriquet “Rattrapante'' or “to catch-up.”

It is commonly said that after the minute repeater, a watch that plays the time musically on demand, the split seconds chronograph is the single hardest complication to master. And that is why these watches are incredibly rare with only a handful of companies the most famous of which is Venus that created these movements. A vintage Rolex with a split seconds chronograph? It will cost you 3 million bucks. A Patek Philippe with this function they start at 300 grand. Basically they were crazy expensive. That was until sometime in the late ’80s when IWC started toying with the idea of creating the most reliable, bullet proof, user friendly and accessibly priced split seconds chronograph in the world.

The thing with IWC is that it has always striven to endow the highest traditional complications with a greater sense of functionalism while making the price of these complications far more accessible. It achieved this with the incredible fully synchronized perpetual calendar designed by Kurt Klaus, it did this with its modular minute repeater mechanism and with its mysterious tourbillon. Says Kurt Klaus, the brand’s former technical director, Revolution hall of famer and watchmaking demigod, “It has always been IWC’s way to pursue functional innovation. The split seconds chronograph is an incredible complication, but in the past it involved a great deal of repeated fine tuning to set up properly and they were also somewhat fragile and susceptible to damage.”

So how did IWC create the greatest revolution in the evolution of the Split Seconds chronograph? The idea came from a young engineer named Richard Habring (who would later create the Bourdon tube depth gauge equipped IWC Deep One). 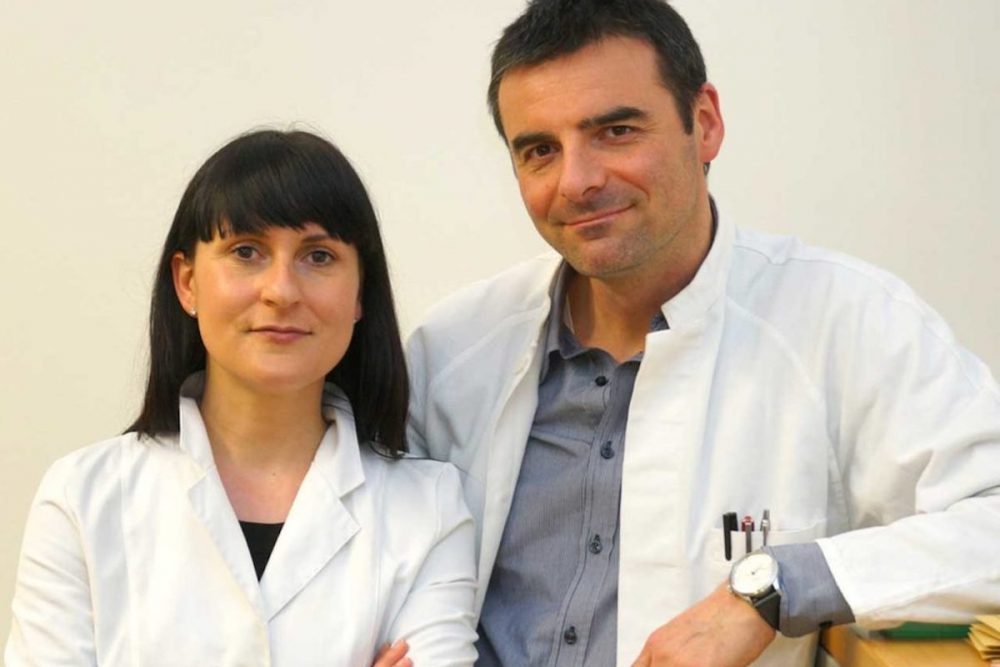 Richard Habring and his wife, Maria

How a Split Seconds Works

OK all that makes sense. But how do you get the split seconds hand to catch up with the running chronograph hand? That is where the magic happens. The split second hand is normally locked in place with the chronograph second hand. This happens because fixed to the split wheel is a return lever which is engaged with a heart shaped cam fixed to the chronograph wheel. Now when the split second wheel stops the lever continues to run around the edge of the heart cam because it is fitted with a jeweled roller. The return lever is under tension from a spring bar. So that when the split wheel is released the spring loaded return lever will immediately leap back to the lowest point of resistance against the heart cam which matches up with the hands running together. 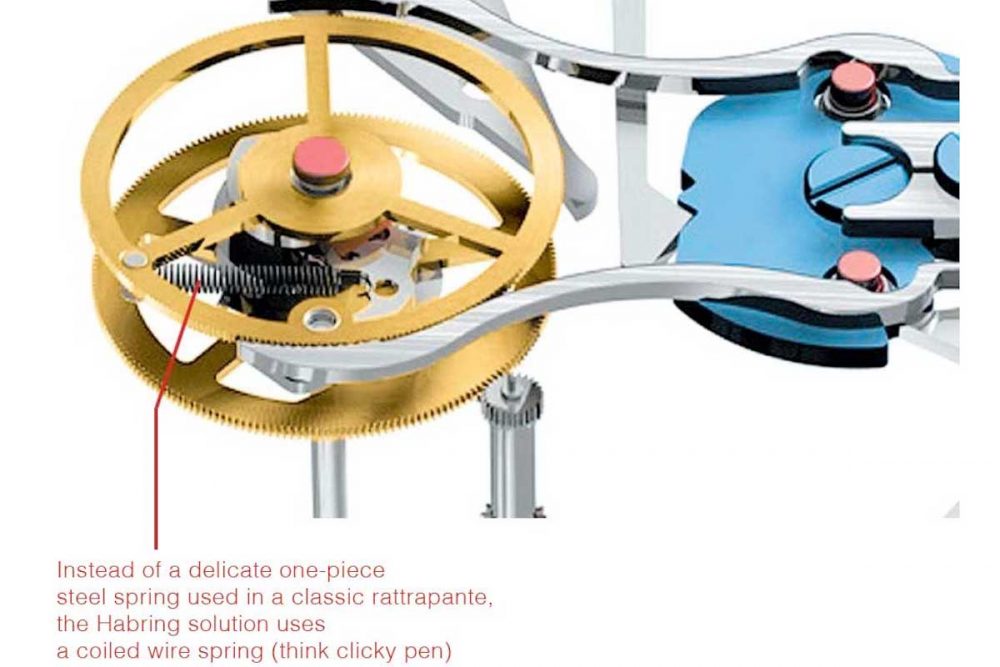 The problem is that it is incredibly hard to get the tension on the return lever just right. Too much tension and you get rattrapante drag or a drag on the entire movement which will cause it to lose time or even stop when the underlying torque from the barrel can’t overcome the resistance caused by the spring tension. But too little and the hands won’t snap back together.

Habring solved this with two key solutions. The first was that he changed out the solid spring bar, to a small, coiled spring like the type you find inside a pen. Just way smaller. This gave a much greater elasticity to the return lever. The second is that he built his split second mechanism on top of the baddest, most bulletproof tractor of a movement, the Valjoux 7750.

When the Doppelchronograph was launched in 1991, it was nothing less than a revelation and a profound statement of purpose. At the time only a handful of manufactures such as Patek Philippe using a modified manual wind Lemania CH27 and Blancpain using a Frederic Piguet automatic caliber 1186 even offered split seconds chronographs and all of these were stratospheric in price. IWC’s Doppel or “Double” emphatically declared, “There is no complication we are not capable of improving and offering at a better price.” It was an incredibly bold flinging down of the gauntlet that would reach its ultimate expression in their first grand complication, Il Destriero Scaffusia or “The Warhorse of Schaffhausen'' also amazingly built on a Valjoux 7750 base. 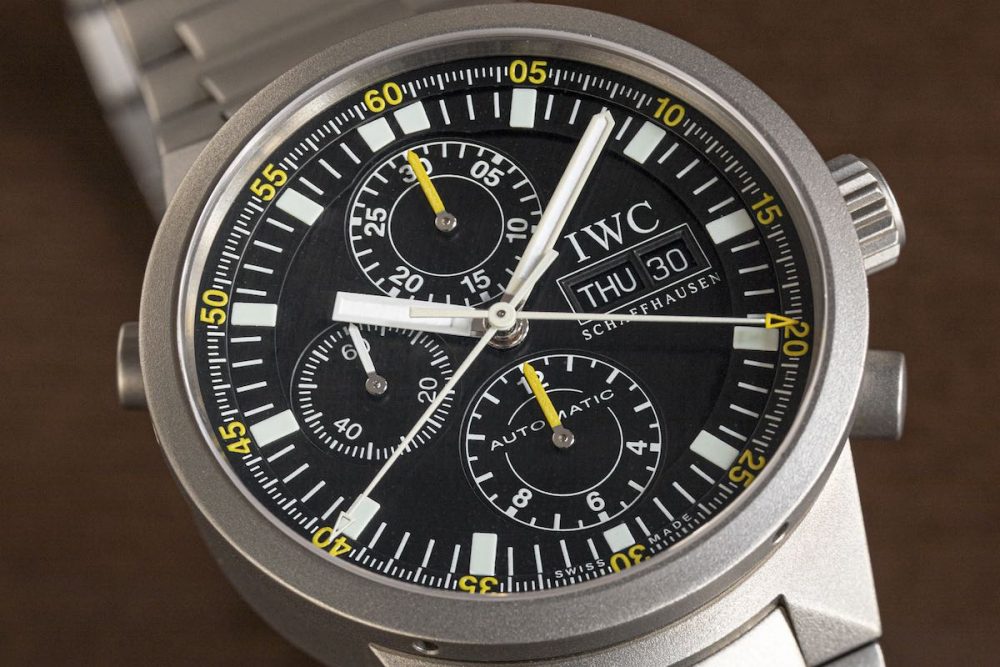 Today people forget that in addition to being the first industrially fabricated and totally robust – you could press the buttons all day long and even in the wrong sequence – split seconds chronograph the legendary Doppelchrono also defined the aesthetic blueprint of IWC’s entire Pilot line. It would not be until 1994 that IWC would introduce the “simple” Pilots chronograph or Fliegerchronograph in both steel and ceramic based on the Doppel’s design. 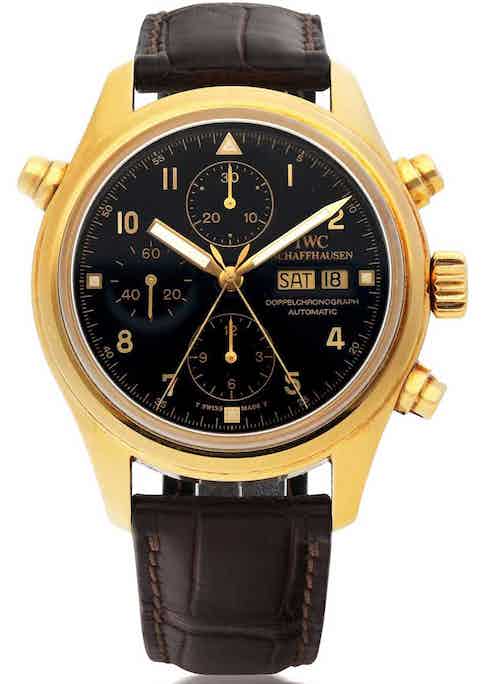 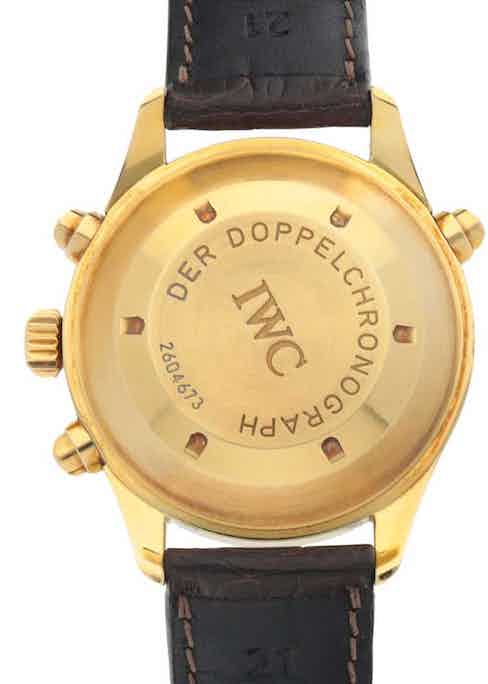 Doppel chronographs were sold on both leather straps or a unique and highly adjustable metal bracelet. They were also made in yellow gold with both black and white dials and today these precious metal Doppels represent some of the rarest and coolest watches in modern history. 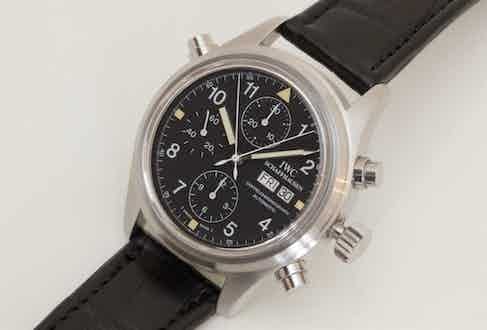 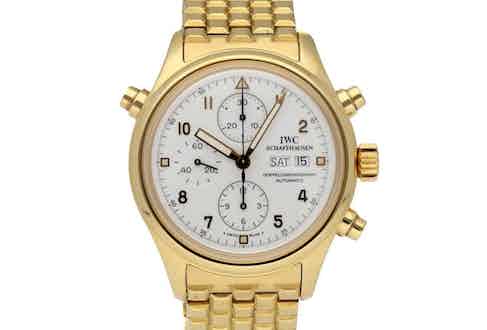 Made between 2001 and 2004, the IWC GST Rattrapante had a short production run but the present example at our shop is one of the most sought-after references within the family. The 43mm watch is quite sizeable but perfect for those looking for a casual sports watch with unique functions. It has a titanium case and bracelet, so that makes sure that the watch isn’t too hefty for its size. 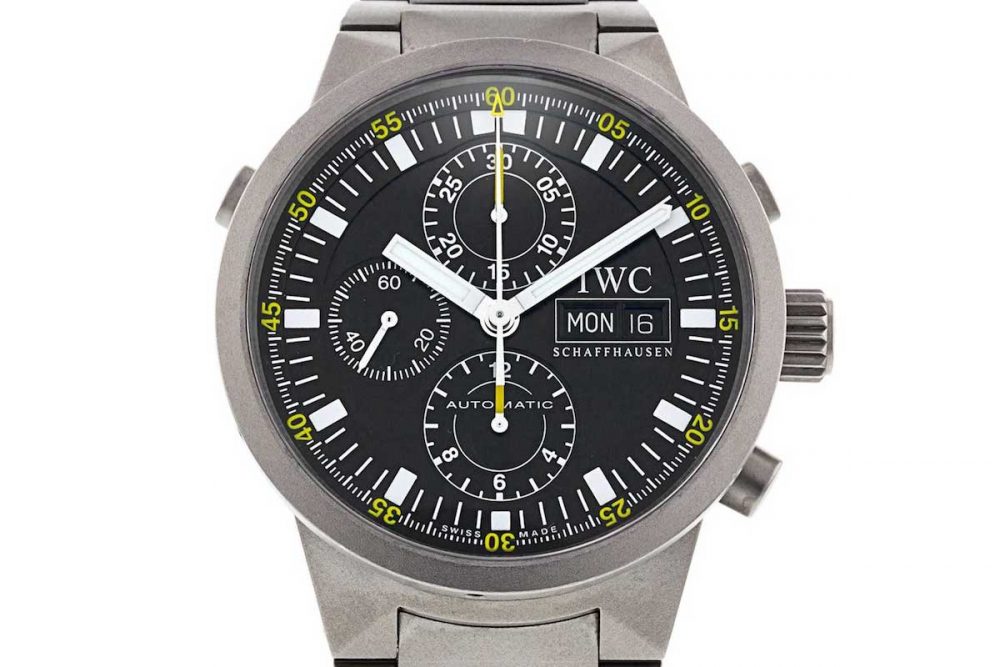 The present example of the IWC GST Chrono Rattrapante at the Revolution shop is from 2003. 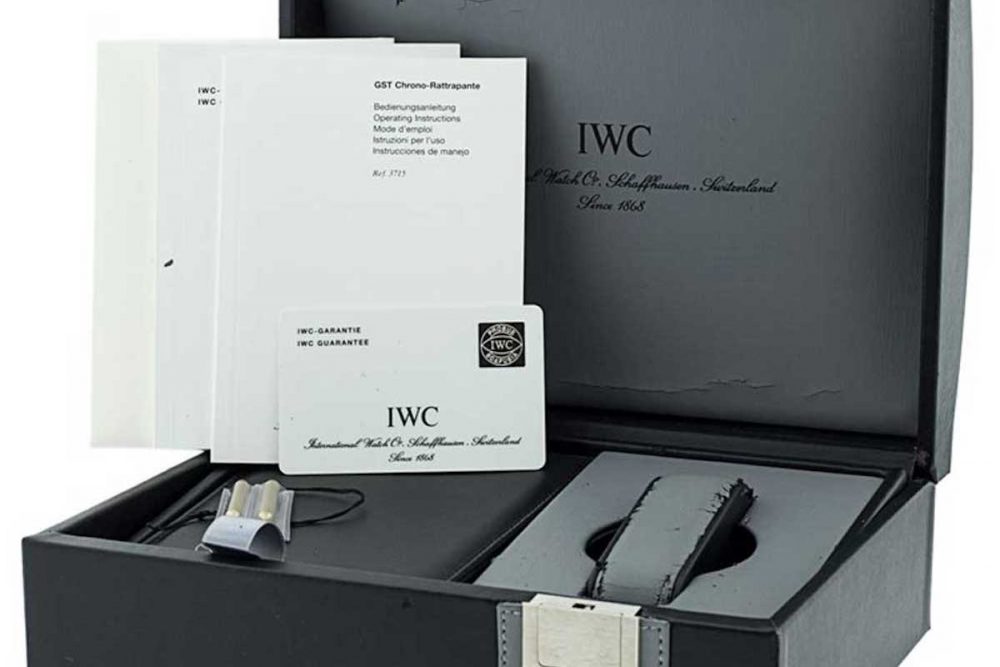 The watch comes with a complete set of original box and papers.