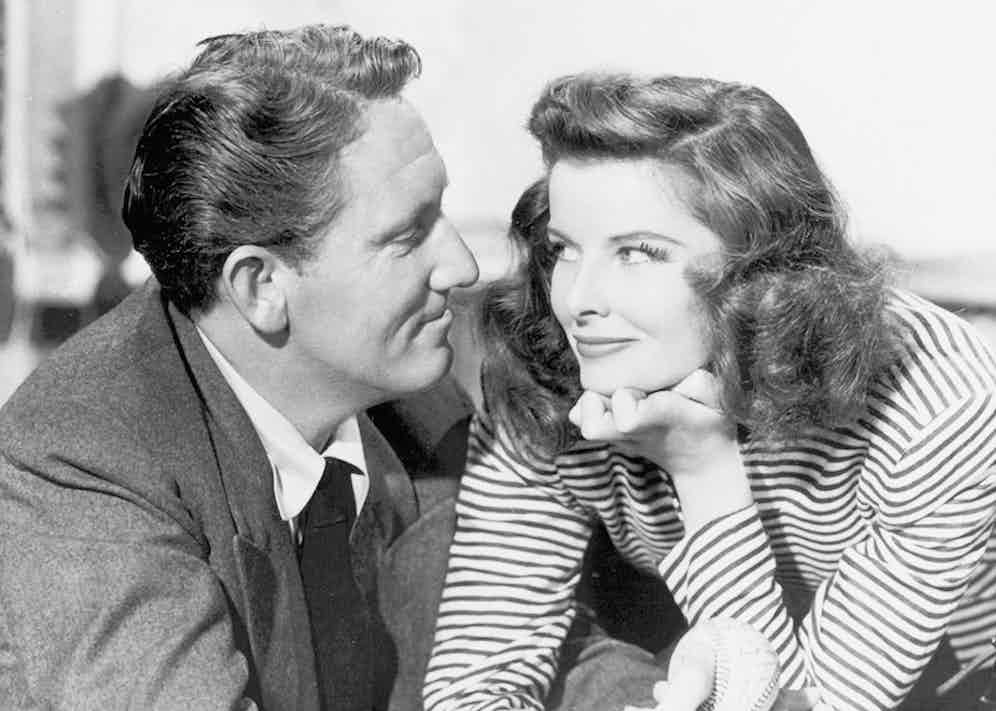 Of all the Hollywood love stories, Spencer Tracy and Katharine Hepburn’s is the most complicated. It’s a little crass to look for narrative patterns in the lives of others, or superimpose the tracing paper of a three-act structure. But if Richard Burton and Elizabeth Taylor’s romance was a Theatre of the Absurd, all modernist repetitions and life-art self-circlings, Tracy and Hepburn’s had the architecture of a 19th-century novel: grand, tormented, perversely moral, stuccoed with the Catholic guilt of Graham Greene and the high-society depression of late Scott Fitzgerald.

Born in Hartford, Connecticut, in 1907, Katharine Houghton Hepburn was the daughter of a surgeon and a suffragist whose enlightened opinions on venereal disease and birth control instilled a progressive lilt towards sexual politics. She challenged female stereotypes from a young age, one summer cutting her hair and insisting on being called ‘Jimmy’. Aged 14 she discovered the dead body of her beloved brother, Tom, hanging from the ceiling. Her parents always insisted it wasn’t suicide (one theory is that it was a magic trick gone wrong). He was 16.

After graduation from Bryn Mawr College and parts with stock theatre companies, she asserted control of her career with the help of her first husband, Ludlow Ogden Smith, a wealthy Pennsylvanian businessman, and of other lovers. Capitalising on the stage success of The Philadelphia Story (whose rights her on-off flame Howard Hughes had bought for her), Hepburn agreed to let M.G.M. film it on the condition she played the lead. She asked for Spencer Tracy and Clark Gable to play her suitors; she got Cary Grant and James Stewart. It was a monumental hit. Though they’d still not met, she requested Tracy again for her next film, Woman of the Year, to play the sports journalist opposite her political reporter. She got him, and so it began.

"She challenged female stereotypes from a young age, one summer cutting her hair and insisting on being called ‘Jimmy’."

Spencer Bonaventure Tracy was born in Milwaukee in 1900. His family were stout Catholics, his father a truck salesman. A charismatic, hyperactive child, he cheeked his way through a school run by Jesuits, briefly joined the Navy, then won a place at Ripon College, where he made his stage debut. Rising through the ranks of stock theatre, Broadway and television for Fox, he was signed by M.G.M., the most prestigious studio in Hollywood. While a member of the New York Wood Players, his first stock company after Ripon, he met the actress Louise Treadwell. They married in 1923 and had a son, John, the following year. When Tracy found out, shortly after John’s first birthday, that his son was deaf, he was distraught, certain that his own sins (such as adultery) had been vested on the child. He emotionally estranged himself and threw himself into his work. 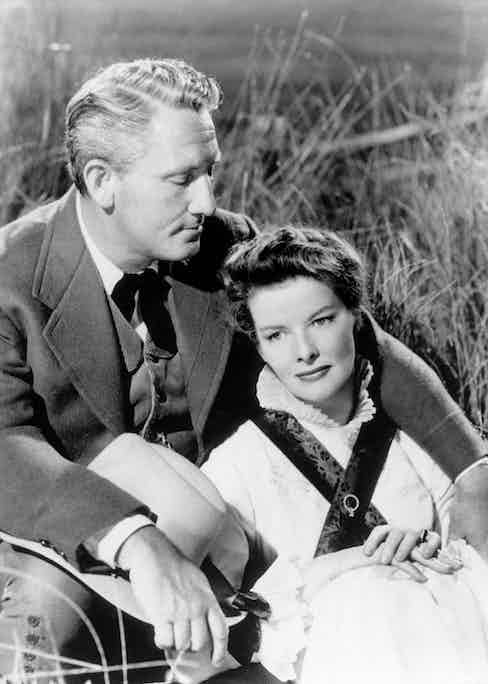 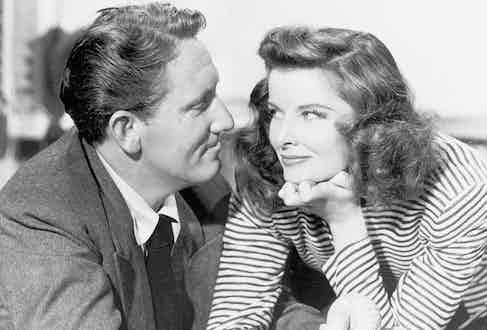 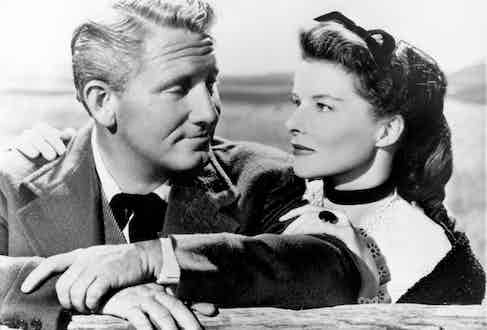 Hepburn was more open about the guilt she felt over her first marriage. She made her husband change his surname so she wouldn’t be known as Kate Smith, reaped his contacts, and divorced him as soon as she won her first Oscar (in 1934, for Morning Glory). She later admitted in an interview that she had been “an absolute pig with Luddy … he was an angel.” Tracy left his family home in 1933 and reached an amicable separation with Louise, though they never divorced. He had affairs with co-stars including Loretta Young, Joan Crawford and Ingrid Bergman before he met Hepburn on the set of Woman of the Year in 1942, when he was 41 and she was 34. Initial impressions were cagey, and their first exchange had the zip of a screwball comedy. Hepburn served with, “Mr. Tracy, you’re a little short for me”. “Don’t worry,” he shot back, “I’ll cut you down to size.” Hepburn “knew right away that I found him irresistible”.

The pair addressed each other at first as Miss Hepburn and Mr. Tracy, but within days they were on first-name terms; on testier days, he would also refer to her as “Shorty” or “that woman”. There was also a clash of technique — Hepburn the fervid rehearser versus the more spontaneous Tracy, who often gave his best performance on the first take. His philosophy was simple: “Come to work on time, know your lines, and don’t bump into the other actors.” (Tracy, for all his moods, had a knack for the trim one-liner: he once claimed there were “times when my pants were so thick, I could sit on a dime and know if it was heads or tails”.) But the blend worked. Such was the alchemy and popularity of their combined pedigree that they made a further eight films together.

In the cracks, though, are intriguing hints of their real life. The flash of stockinged leg the first time Tracy sees Hepburn on screen in Woman of the Year; Tracy’s appraisal in Pat and Mike that there’s “not much meat on her, but what’s there is ‘cherce’”; The State of the Union’s tagline that “she fought to keep her man from … the other woman” (one wonders how that went down with Louise); Tracy’s ultimatum to Hepburn in Adam’s Rib that “if you want to be a big He-Woman, go and be one, but not with me”. Asked why he always received top billing above Hepburn, Tracy said: “Because this is a movie, chowderhead, not a lifeboat.” 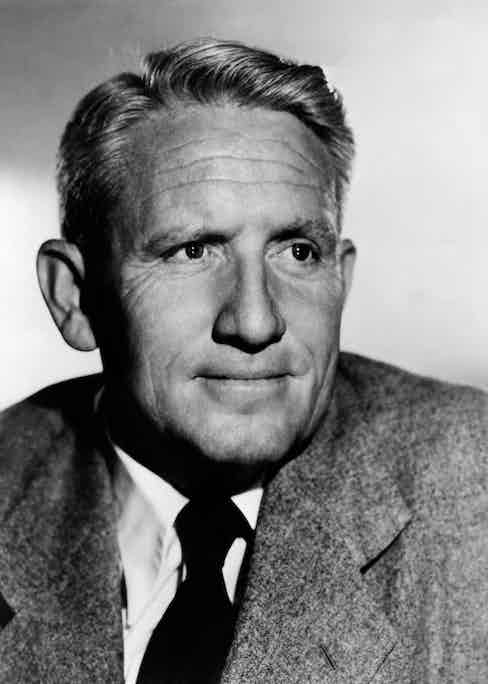 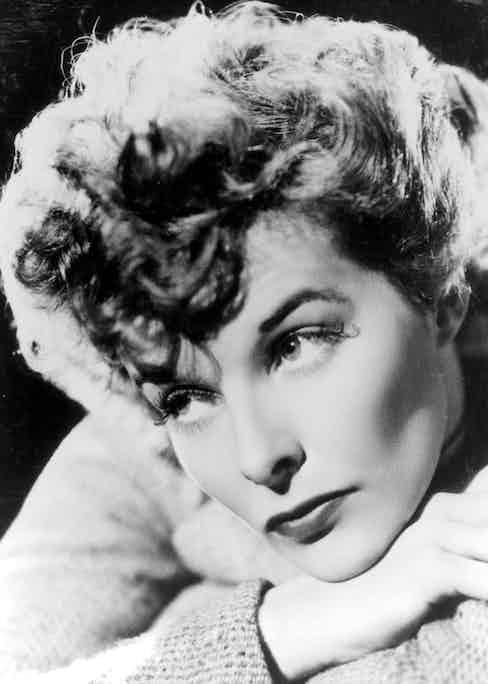 One can’t be absolutely sure how it all worked, given the black-belt expertise of the Hollywood studio hushing it up, Tracy’s refusal to articulate his feelings for Hepburn in public, and Hepburn’s late-life inebriation with her own mythology (not to mention the lack of psychological curiosity in herutobiography). But Tracy was so keen to keep the affair from his wife, just as M.G.M. were to avoid a controversy, that they kept it a ‘secret’ for 26 years (many in the ‘biz’ knew, of course). They tried not to be seen together in public, retained separate homes to avoid gossip, and Hepburn never pushed for marriage. Busy film schedules meant the time they spent together was scarce, especially in the fifties, when Hepburn was abroad shooting the likes of The African Queen. According to his friend Joan Fontaine, Tracy could “get a divorce whenever I want to, but my wife and Kate like things just as they are”.

But Tracy’s was a troubled soul. He grew on the side — as best he could, and to borrow from Saul Bellow — a little herb garden of good, generous feelings. But it fought a thunderhead of alcoholism, depression, anxiety and insomnia (he once ‘joked’ that he used to take “two-week lunch hours”). Hepburn called him “tortured”; his wife, Louise, said he had “the most volatile disposition I’ve ever seen … when he’s low, he’s very, very low.” Hepburn put his interests and demands first: “I wanted him to be happy, safe, comfortable. I liked to wait on him, listen to him, feed him, work for him. I tried not to disturb him… I was happy to do this.”

"Tracy once claimed there were “times when my pants were so thick, I could sit on a dime and know if it was heads or tails.”"

This is Hepburn at her most heroic — he sometimes used to bellow at her, pissed, until he passed out — and all the more moving behind closed doors. Less glamorous than the hypersexual rages of Burton and Taylor, or the noir-boiled cool of Bogart and Bacall, in some ways it’s deeper. When Tracy’s health deteriorated in the sixties, Hepburn took a professional hiatus to look after him. “I virtually quit work just to be there so that he wouldn’t worry or be lonely,” she said. She was by his side when he died (while making himself a cup of coffee) in June 1967; he thanked her merely as his “wonderful friend”. Hepburn didn’t attend Tracy’s funeral, mindful of his family. 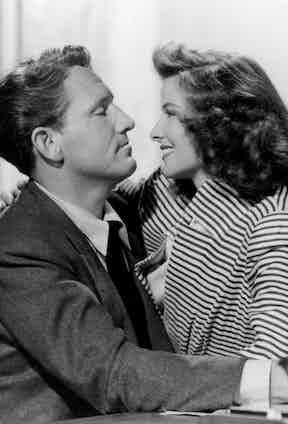 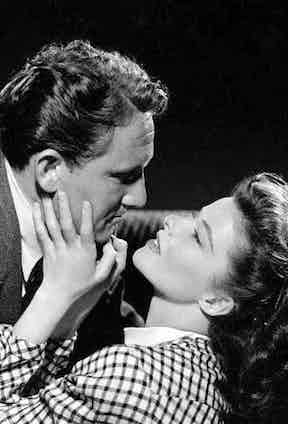 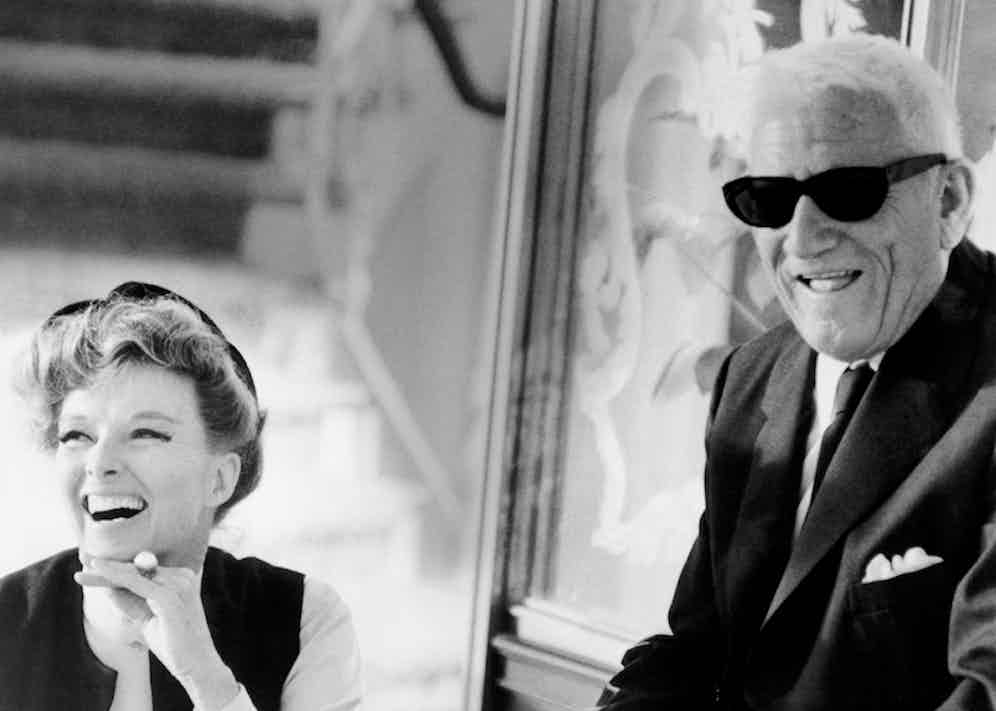 It wasn’t until the death of Louise herself, in 1983, that Hepburn broke her public silence on Tracy. She had befriended his daughter, Susie, and felt it wouldn’t do any harm. Asked in an interview why she stayed with Tracy for so long when their relationship could never be official, she replied: “I honestly don’t know. I can only say that I could never have left him. [We] just passed 27 years together in what was to me absolute bliss.”

In 1986, a year shy of 80, Hepburn read out loud on American television a letter she’d written to Spencer Tracy. Some described it as sentimental. If sentimentality is (as Joyce defined it) unearned emotion, it was the opposite of sentimental, because, God almighty, Hepburn had earned it by then. Her delivery had a doddery theatricality, excusably, but the most potent words were the most understated. She describes his “tossing and turning” in life: “Living wasn’t easy for you, was it?” She cites the priest who told Tracy he concentrated on “all the bad and none of the good”. Acting, alongside polo and fishing, was a rare escape: “What a relief you could be someone else for a while.” The letter’s final line, which distils to four drops the unfathomable ocean of their relationship, is an unanswerable worthy of Beckett: