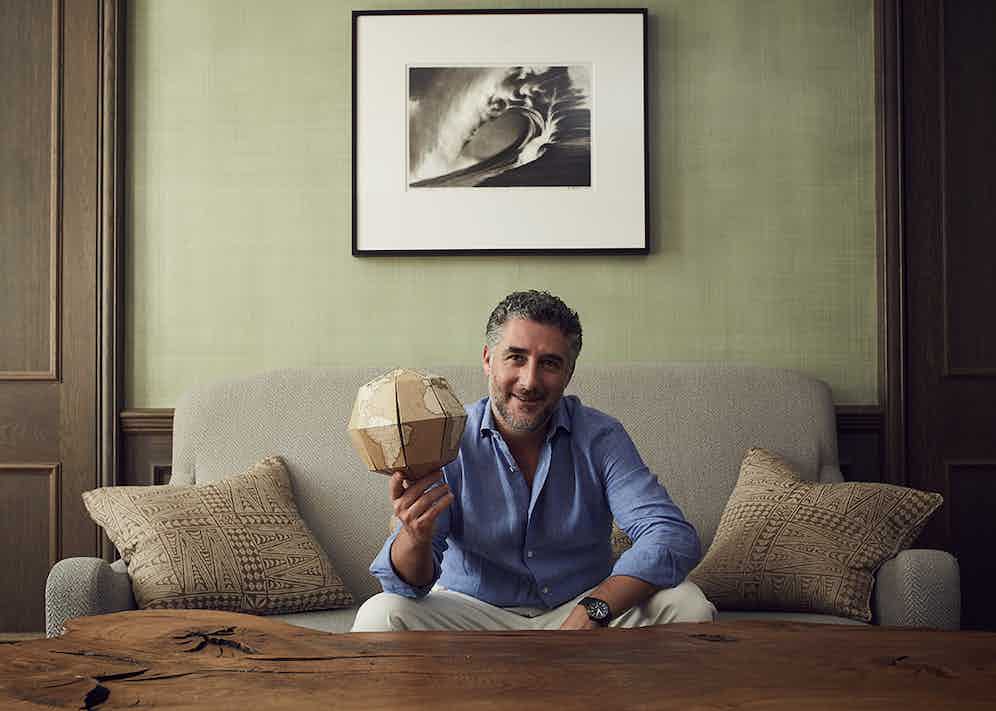 Luca del Bono has one of those faces that disarms you the very second he clocks you. Two warm brown iris peep out from almond-shaped eyes that narrow to appear almost completely shut when he smiles, which is to say virtually all of the time. He exudes the joviality of the southernmost Italians, combined with the confidence of somebody exceedingly well-travelled, which makes him feel strangely familiar, despite never having met him before. It quickly becomes apparent that we have good friends in common, but this should come as no surprise to anyone - Luca del Bono is in the business of making relationships, of making human interaction more interesting, more engaging, more relevant in a world where we are increasingly playing out our desires, needs and internal lives on a 4in x 2in piece of touch-sensitive glass.

I met the serial entrepreneur one recent sunlit morning at the South Kensington Club, in London, the members club that he founded in 2015, after previously co-founding the international luxury concierge service, Quintessentially. Throughout his career, Del Bono has, in short, been able to monetise the two things he enjoys doing the most - travelling and talking. On the latter, he is charmingly adept at holding court, whether he is pitching his most recent venture, ONDA, or leaning in to tell you a story that you 'probably shouldn't repeat'. But he's a listener too, refreshingly engaged and willing to take one's words and follow them down a tangent that may deviate from his original course. Given most of our daily interactions seem to play out on WhatsApp these days, it's invigorating to meet someone who you can see in front of you becoming visibly excitable as a conversation takes an uncharted course. It's this innate conviviality that has helped make del Bono's previous ventures so successful because in the business of building like-minded communities, there is no time for wallflowers. 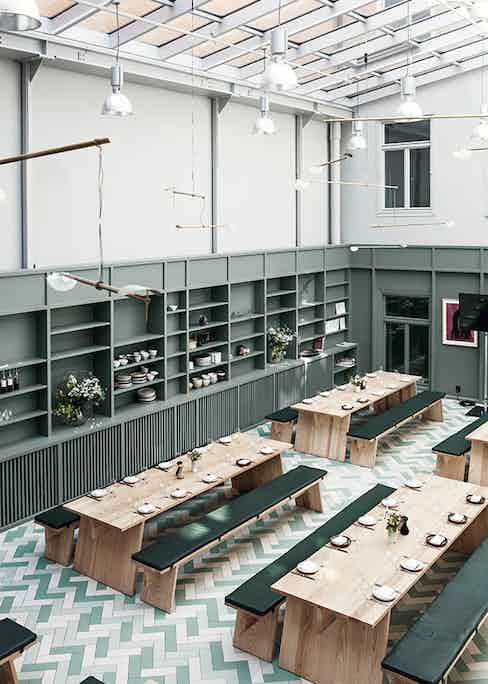 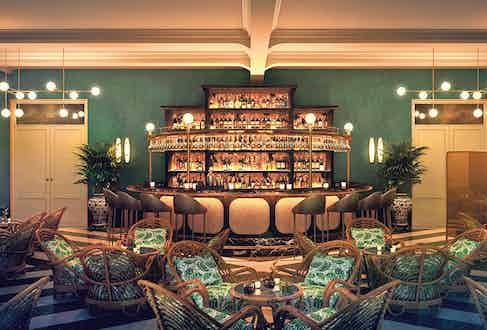 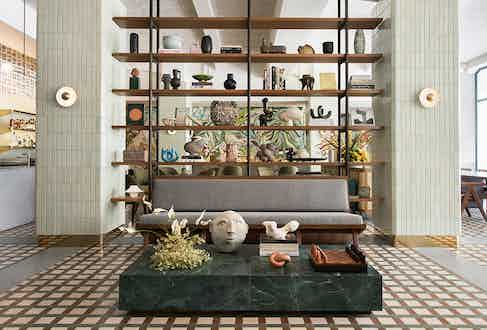 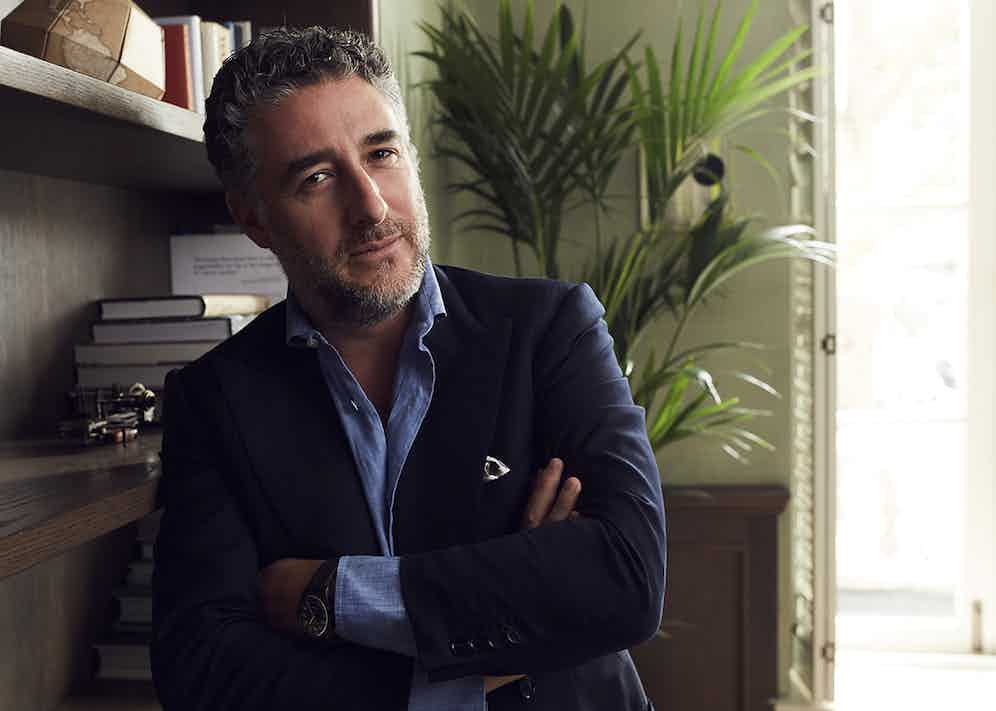 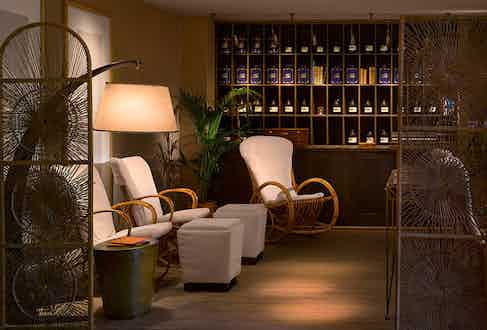 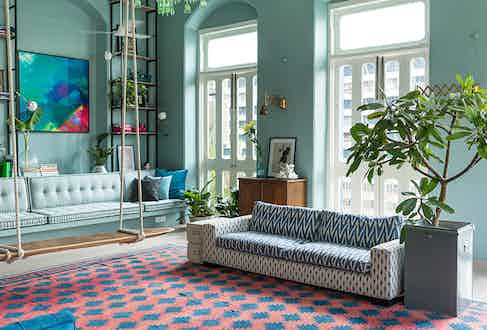 ONDA is del Bono's latest community, in many ways a natural extension from the premise behind the South Kensington Club's Voyager Club, which seeks to "nurture our instinct to explore in search of knowledge, experiences and basic human values; to encourage members to push boundaries, open their minds and do something different with their time." ONDA, then, takes this idea and runs with it, offering membership to a growing network of members' clubs, wellness retreats and shared working spaces all over the world, so that intrepid subscribers can build their own networks wherever they may find themselves. Where ONDA differs, however, is in its expectations of its members: it functions much like a potlatch, the indigenous American gift-giving ceremony, the only difference being that the act of giving doesn't bestow upon you superiority. Members are invited to 'gift' the community their expertise or interest, whatever that may be, in order to enhance the knowledge and experience of the group. Meet-ups, seminars, wellness classes, lectures, you name it. Del Bono, humbly claims that he just provides the platform for others to enrich one another, but it's a serious undertaking in a social world dominated by digital interaction. It was refreshing then to catch up with him in the flesh at the South Kensington Club...

Where we are now sitting used to be the home of the artist Francis Bacon, am I correct? What a coup to be able to purchase suchan historicbuilding.

That's almost correct! What is now the bathhouse of the South Kensington Club was actually Francis Bacon's old house. He moved here in the late 1920s from Ireland with his nanny. He was 27 years old. He was living on the first floor and had his studio on the ground floor. He had his first exhibitions here, as well. You know, because he didn't have a lot of money he decided to become a male escort. He was a male walker, I've seen the announcements in the Times, or wherever he was advertising. The nanny would actually go through the responses apparently, to see who would be eligible or not! I contacted the Francis Bacon Foundation, and the Mayor of London's office who gave us the plaque to commemorate his time here. But you can really think of SKC as the coming together of four buildings. Ronnie Wood also used to have his club here, the Harrington. His wife Jo used to cook in this room! The dining hall was in the back, it was awful, at least what we got to see of it. The club was so grim, so dark. Ronnie would be downstairs, I remember, always serving Guinness. He was obsessed with Guinness. I kept one thing from Ronnie's day here: he had his own private bathroom, which I removed and put into Francis Bacon's house. I kept it as it was and put a picture of Ronny in the bathroom. I had to give him credit for something. My great friend, the late Mark Shand had some fantastic stories from those days. He kindly offered to do a talk here for me before he passed suddenly. We met in November 2013, and he must have passed away a couple of months later. He had the most successful fundraising event at the Gramercy Hotel, walks out for a cigarette at one in the morning, slips on the icy pavement and just like that he was taken away from us. Life is such a lottery, only nobody won that day. We lost an incredible man.

I gather Mark was an influence in developing the explorer concept of the Voyager's Club at SKC.

He was actually telling me a lot of things that we should do. From the very outset, we wanted to do an explorer's club where we could have inspiring talks. In fact, our first summer talk was by a guy called Lewis Pugh. He swims in crazy places to raise awareness on ocean conservation. You should watch his TED Talk. Most famously, he swam in the Arctic. He had hardly any team with him and very little in the way of sponsorship. They managed to get a lift to the swimming spot with this Russian cargo ship. His challenge was to do a mile in his Speedos in order to make a point about global warming because 10 years ago he wouldn't have been able to swim in that same spot because it would have been completely frozen over. What nobody had warned him about was that actually, it's not like in those photographs you see, where everything is sort of crystal blue and beautiful. Actually, the water is pitch black, like jumping into a freezing in a pool of oil. You cannot even see your hands. Can you imagine?! He also went and swam in a lake in the Himalayas, which didn't exist 10 years ago. I love how these kinds of characters can come here and deliver talks to people who otherwise would be going to, you know, Cap du Roc, spending vast amounts of money to lie on a sun lounger, when in actual fact, they could have life-changing moments.

What do you think about the travel aspect of Instagram? Have influencers opened people's minds to exploration or is it all just artifice?

I think there are people nowadays who, if you look on social media, say "I've been to 56 countries, 60 countries," or whatever. But travel is not about ticking boxes. You're supposed to enrich yourself with travel, to have experiences in faraway places that change the course of your life or the way you view the world. That experience for me was on the border of Libya and Sudan, for a solar eclipse. I mean, who goes to Libya for a solar fucking eclipse? I didn't want to go. Stupid solar eclipse. It was an absolute circus, completely off the grid, but unforgettable. I felt shivers down my spine. It was so beautiful, just so special and got me thinking 'what if we could introduce this kind of thing to people?' So, that's what we did. 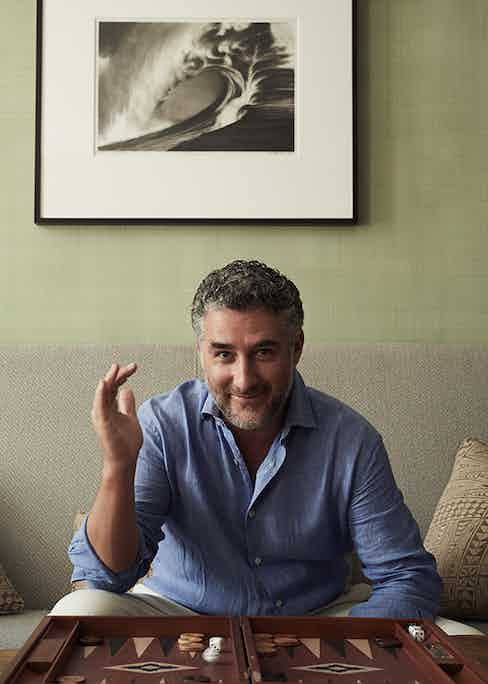 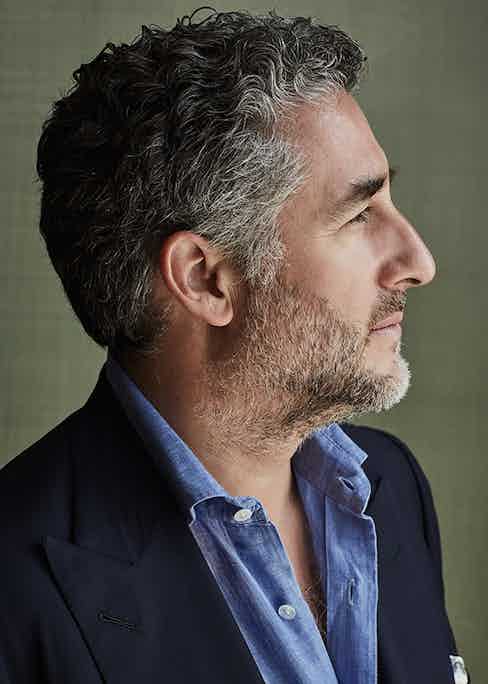 Was travelling as a child the catalyst for your intrepid entrepreneurial streak?

Not particularly, but certainly where I grew up was a huge factor in how I am and how I think. I was born in Lipari, one of the Aeolian Islands just South of Sicily. My mother's English... but I'm a proper Aeolian. I remember myself as a six, seven year old, just feeling like I was exploring all the time. Playing with lizards, fishing for crabs, diving for urchins, scrambling up the volcanic slopes of Stromboli. My back was black because I was bent over all day. My mother would have to come and get me when the sun went down. I loved being on the rocks, all day long. That connection you can have with nature is so so powerful. I launched an Aeolian preservation foundation in this room in 2015 and we've also just partnered with Captain Paul Watson who founded the Sea Shepherd Conservation Society.

How does a venture such as ONDA help people better engage with one another in the age of digital relationships?

I think there's a huge movement now of people who want to live more and more offline, which is, ironically, being catalysed by the ease of which one can store memories online. So platforms such as ONDA can serve as a conduit for travel experiences. It can be the means to go meet people, in the flesh, like humans are supposed to do. When our patrons join ONDA we ask them, "what can you contribute to our environment?" It's fascinating what comes out. We have people say they want to share their passion for astrology with fellow patrons. There's one patron who has developed an AI system that tracks down sex traffickers and wants to do a talk to explain his venture to other patrons. There's another guy, who's Swedish, a developer, based in London. He wants to do a seminar on tantric sex. What a lovely guy! Why do this? Because we all have dreams. We all want to be explorers and educators in our own way.

One aspect of modern living that online interaction hasn't yet solved is loneliness. Do you think a platform like ONDA, which encourages real interaction, is a solution?

Absolutely, especially for people in big cities. They've got it much better in California, where they are way ahead on understanding the importance of wellness and social interaction and balancing work life. I mean, I have friends who, every morning, they go surfing. Every day they go riding. Every day! In contrast, in New York, it's all centristic. We're setting up an operation in Brooklyn and had some events in the Hamptons earlier this year that will hopefully help people to better balance their lives. Our product is the connection between people and places, which in turn generate experiences. Entrepreneurship is more often than not about simplifying the model and never giving up. If you believe in something wholeheartedly, personal or business, you just make it happen."

For more information on ONDA, visitwww.ondalife.com. 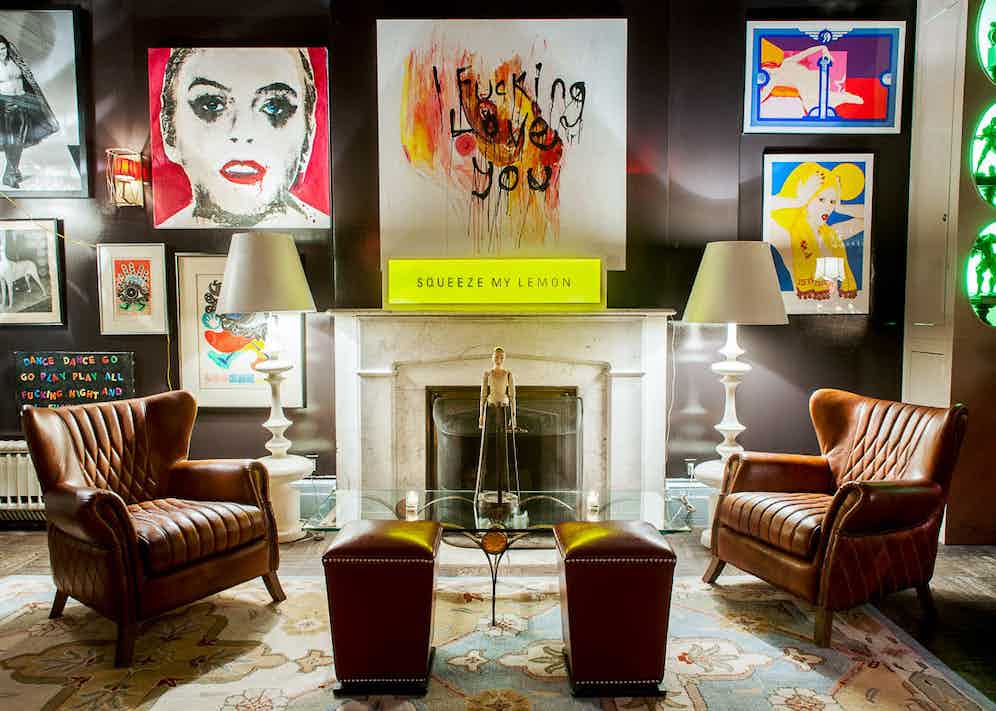