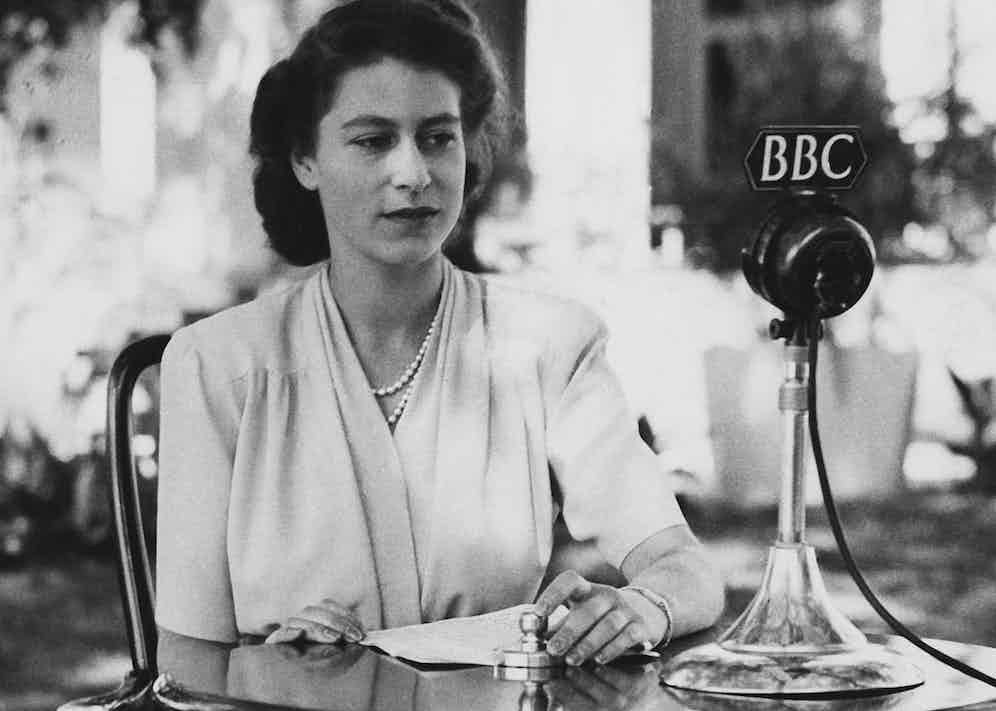 Princess Elizabeth makes a broadcast from the gardens of Government House in Cape Town, South Africa, on the occasion of her 21st birthday, 21st April 1947. (Photo by Topical Press Agency/Hulton Archive/Getty Images)

When Her Majesty the Queen addressed the nation about Covid-19 from Windsor Castle, it was a stark reminder of how we humans throw our heads up to the sky and hope that someone impressive offers a comforting word or a decisive action. Part of Monarchy is to provide divine presence on earth, something that manifestly proves we are part of something monumental, rather than the existentialist belief of, born, live, die.

In the (god-I-wish-it-were-sung-more) second verse of the national anthem, the lines may she defend our laws, and ever give us cause, to sing with heart and voice, God save the Queen, could not have been more rousingly invoked than with her speech tonight and even had well-documented muscular republicans like Alistair Campbell come gushing from the woodwork with the most humble duty towards their sovereign, and quite right too.

This speech had to matter, and only a few people on this planet could pull it off. To have that pressure placed on you requires more than an ability to write, it needs someone who projects an almost spiritual authority, something that inspires people to follow. We know that her father King George VI, inspired a nation to stare down Hitler despite having a stammer, and the effect is no different. Great speeches have pro- and preceded great feats of humanity, some long, some short, all memorable and if we were all still doing cave paintings, they would have been preserved in that kind of long-lasting manner. Let’s hope books and YouTube have similar longevity, time will tell. Here are some of the finest:

Queen Elizabeth: Two years after the end of world war two, and just five years until she would accede to the throne, Her Majesty is at it again, with a speech on her 21st Birthday that set the tone for her lifetime of service and duty to her country. This speech, delivered during a royal tour with her parents in South Africa, famously had the then Princess Elizabeth say, “I declare before you all, that my whole life, whether it be long or short, shall be devoted to your service.” Hard to say whether this speech is exceptional for its brilliant writing, it’s sentiment of duty and service to others, or the rare quality of being a powerful person delivering on a promise made in a speech. ‘All of the above’ is an option too.

Tom Hanks: When we think of Tom Hanks, we have an image of the wholesome screen luminary, untainted by celebrity, with a talent that far outreaches his everlasting career and list of awards. Not only does he comport himself with the dignity and kindness that we as mere mortals aspire to, but he also puts himself forward and stands up to be counted when the counting really does, well, count. Case-and-point is the speech he made at the Oscars when he won the best actor Oscar for Philadelphia in 1993. Believe it or not, being gay in 1993 was not easy, and being a vocal supporter of LGBT rights as the aids continued to vilify an entire community, was also pretty fraught. When you’re Tom Hanks, that doesn’t stop you, and accepting his award, he said those lines that anyone involved with the written word would feel they could retire on, “The streets of heaven are too crowded with angels.” It brought Hanks to tears and probably will you too. If the lines sound familiar, you will probably be a West Wing watcher; Aaron Sorkin used the lines for a Jed Bartlett speech.

Martin Luther King: ‘I had a dream’, right? Wrong. It is a wonderful speech, with unbeatable sentiment, but after a four-day march from Selma to Montgomery, Dr. King gave his “Our God is Marching on” speech. The repetition of “How long? Not long…” was almost certainly a precursor to Obama’s “Yes we can”. It was a rallying cry, a verbal banner from which people drew hope, inspiration and courage. The civil rights movement in the United States is a movement that arguably still has a long way to go, but it has exported itself to other countries, to minority communities who felt like their immutable characteristics were considered second class to everyone elses, and put themselves in harms way to march up, look the powerful in the eye and say just as MLK said in this speech “we aren’t going to let any one turn us around.”

Winston Churchill: Perhaps this is the obvious choice, and though I was trying to avoid that in this list, the inevitability of inclusion of “We shall fight them on the beaches” by Sir Winston Churchill, is similar to the inevitability of defeat at the hands of the Nazis had Churchill not rallied the nation to fight with this speech. Just as with Her Majesty last week, this was a speech that had to stick and boy did this do just that. In any poll carried out on greatest Brits of all time, Churchill always tops this list. Not because he was the perfect politician, or the perfect man – none of us are – but he remains the man Britain and the world needed, the antidote to what was coming from across the channel, a malevolent force, unconscionable to anyone in favour of liberty, justice and the sanctity of human life. This was his finest hour, and we have been reaping the benefits of it ever since.

Charlie Chaplin: So this could in theory be dismissed by you dear reader, after all it is a fictional speech, delivered by one of the world’s great comics. Well I say comic but Chaplin, as many forget, was an extraordinary actor. His Great Dictator speech is a masterpiece, with endless lines of pure inspiration, given even greater force of irony and ‘what if’ because of him clearly supposed to be Hitler. The messaging is like the best horoscope, where we can all find the meaning within it to feel like it’s personal. At this time, where fear and anger are going toe-to-toe with our well established democratic and tolerant societies, which I do believe we are, this speech is enough to wrench forth the kindness and the potential of all humanity. It should be listened to, studied, admired and also acted upon, fiction or not.