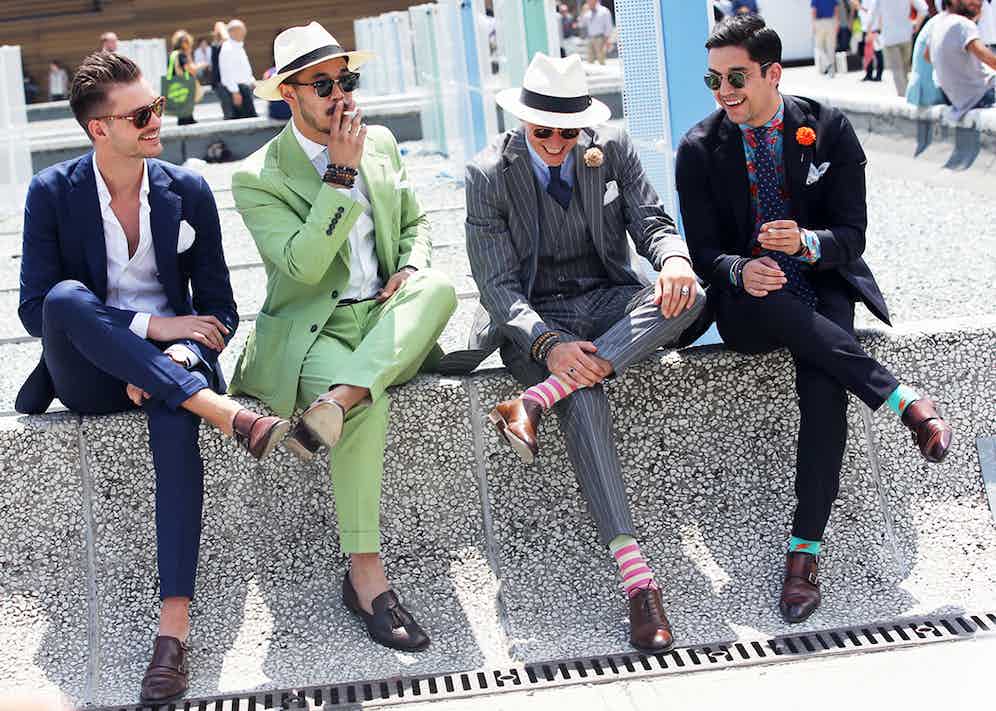 Pitti Uomo is always a surreal experience, bringing together as it does the professional aspects of a trade show intended exclusively for buyers and brands, with the uninhibited ridiculousness of a fashion show for the world-famous phenomenon of the ‘Pitti Peacock’. It’s a bizarre and rather forced combination to experience and this last Pitti just passed felt peculiar not just because the show seemed suspiciously quiet, but also because the prospect of wading through a shifting sea of feathered hats, jangling bracelets and monkstrap buckles was more tiresome than ever.

As this comment might suggest, our perspective at The Rake has changed somewhat over the last Pitti Uomo or two, because we no longer attend exclusively as journalists, but as buyers too – looking for curious and compelling new propositions to stock on our online atelier, shop.TheRake.com, and in this new context, the somewhat saddening reality of the sartorial chauvinism that continues to abound at Pitti has been rather hammered home.

Buying-wise, the opportunity to meet with those artisans that inspire us in order to gain an insight into what they’re working on is always enjoyable - see our Instagram page for edited highlights. Brunello Cucinelli for example is always impressive and SS17 promises to be particularly special, representing an ever more deft combination of sportswear and soft suiting, but also introducing new, particularly rich textures into knitwear and tailored outerwear - with treated tropical worsteds and superfine all-natural cotton jerseys at work. Highlights include the forthcoming 'Tailored Leisure' suiting, a range of formal jackets supplied with two pairs of trousers - one conventionally tailored, the other in a louche cut with pleats and a draw-string waist. Inspired by the colours of a dusky Italian summer’s evening, earthy shades of taupe, tan, forest green and burgundy make an appearance alongside the classic Cucinelli colour palette of navies, neutrals and soft shades of grey.

"The prospect of wading through a shifting sea of feathered hats and jangling bracelets was more tiresome than ever."

From Italian powerhouses to English artisans, Drake's continues to create ever more inventive, quirky collections which as always remain supremely tasteful; with a new quality of printed cotton-cashmere to be found in the pocket hankies of SS17, and an extraordinary range of classic blue and white hand-printed grenadines ties (think navy fine-gauge grenadine with hand painted white polka dots) to come next summer. Crockett & Jones has been experimenting too, with improvements to the finish of its already exquisite Handgrade Collection, and some new rather beguiling suede Chelsea and Balmoral boots to come this autumn. Equally intriguing were the latest designs of Austrian bottier Ludwig Reiter, which presented a compelling collection of contemporary sneakers in rich full-grain leather which are well worth a look.

Private White’s SS17 collection (as seen at London Collections Men) introduces a new wealth of superior double-breasted waistcoats, travel jackets and 'safari-esque' workwear into the mix for the rakish journeyman. On the sartorial side of things, Sciamat is presenting an ever more textural, confident aesthetic with their signature puffed-shoulders rendered in soft, drapey jacketing fabrics and Hardy Amies' super-cool monochromatic tailoring (again, see our LCM report for more) felt refreshing and ultra-modern. For leather goods the witty, exquisitely designed works of Mark/Giusti were a joy – inspired by the soft blues and greys of an afternoon at the English seaside.

The wares on display then, were as intriguing as ever. But this is only one side of the coin, and brings us back around to the issue of Pitti’s cult status as an unofficial fashion show. Readers may well have seen the short mockumentary film recently released on Vimeo (you can find it here), parodying the Pitti Peacock as a particular species to avoid at all costs. Sadly, it rather hits the nail on the head. Whilst we admire those extraordinary icons and denizens of style who come to represent something more than their own vanity, those individuals that arrive with hipster beards (and for those wondering about my own – mine is not a ‘hipster’ beard, I wear a beard because I look like a thirteen year old without one), dressed in short chinos, bright green and banana yellow skin-tight double-breasted jackets and unnecessary accessories are not genuinely stylish. Rather, they attend with the explicit purpose of affecting a certain look to appease the mob of photographers who come like moths to the flame, eschewing men who dress with sophistication and originality in favour of the generic, neon-coloured peacocks. It’s a sad state of affairs, and it's one which The Rake feels really ought to change.

"This magazine has always sought to recognise discreet and influential style - not to champion the generic and affected."

Please don’t mistake us, there is a great deal of difference between gentlemen like Mr Luca Rubinacci, who visits to represent his house and to purvey the extraordinary Rubinacci aesthetic (an aesthetic which in many senses gave birth to the global obsession with Neapolitan style) and those who mill about in the central square pretending to be talking to their hedge-fund manager on a mobile phone. Unlike these individuals, Luca comes with a purpose, to represent the work and style of his family’s tailoring house. One could neither accuse a gentleman like K. E. Guerre Esq., of affectation. He comes not to be the centre of attention, but to capture those gentlemen like Luca who are genuine style icons – those who do represent something original and significant in the world of classic menswear. Even so, there is it seems a saddening amount of pure posturing and posing going on, more so than ever before, for no purpose other than to satisfy one’s own rather shallow sense of self-satisfaction.

This magazine has always sought to recognise discreet and influential style – not to champion the generic and affected. Pitti Uomo is a marvellously stylish thing, but it is not populated with marvellously stylish people – not by gentlemen that dress with taste and discretion because they feel comfortable and secure in their clothes – but by gentlemen that seek only to find themselves in the paparazzi’s spotlight. That’s not rakish, and one hopes that the sartorial establishment attending Pitti will come to realise this in time.