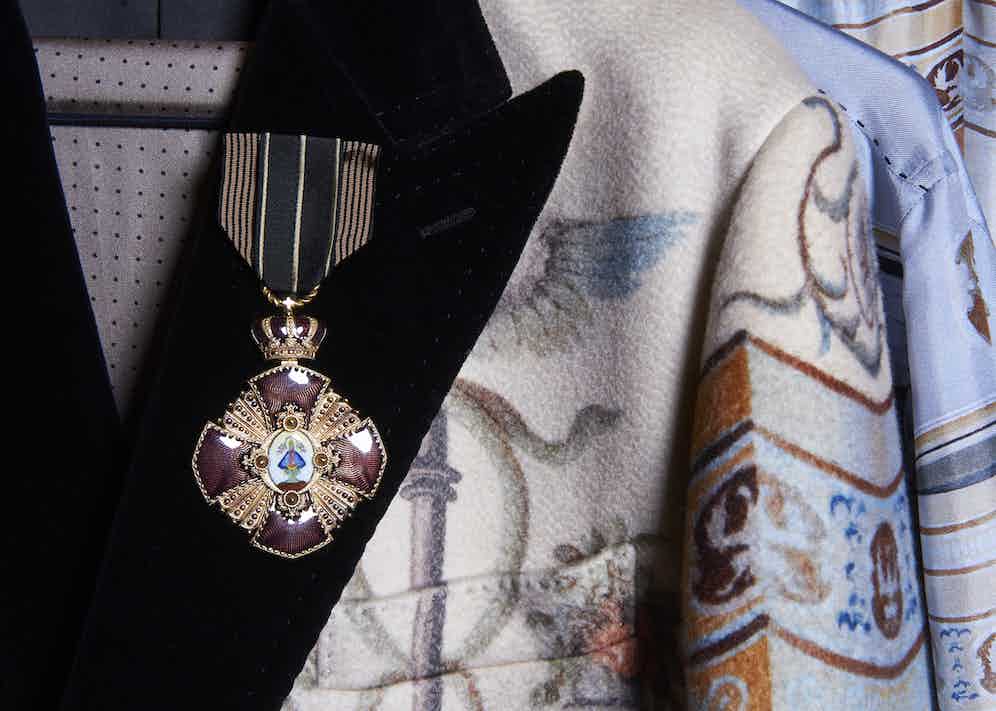 There was something otherworldly at Dolce & Gabbana's Alta Sartoria event in Milan last weekend. It goes without saying that the event was going to be the sartorial equivalent of hyperbole, a collection that utilises a colour palette worthy of the finest Italian frescoes. In fact it was indeed the Milanese frescoes of the Palazzo Labus - where the 25 tailors of Dolce and Gabbana Sartoria ply their trade - that inspired aspects of this year's collection.

Each look was as proud in its ambition as its detailing. From afar, everything from the fresco inspired topcoat in light blues, yellows and greys, to the heavily sequined and embroidered golfing inspired blazers shone with the playful joie de vivre that is expected from Dolce& Gabbana. But it is up close when you realise exactly that Alta Sartoria is much more about the sum of its parts.

It began with a surprisingly sober tone, with a stunning black pin-stripe double breasted three-piece, with robust roped shoulders finished with a polkadot bow tie and carnation button hole. A modern suit yet it set the scene for the Gatsbyesque collection that was to follow. Intricacies of a 3D blazer all stuck about with golden embroidered keys, birds of prey and snakes on top of the softer golden vegetation in the background might have meant that the cut and proportion of the suit was spectacular, but they complimented rather than conflicted.

Fur made both modest and bombastic statements, from fox bombers and mitten ensembles to vast overcoats that overshadowed not only the suiting underneath, but almost the model too. This collection had a very clear sporting theme, with tennis, dressage and golf all contextualised with white fur tennis shirts, burgundy crocodile skinned riding boots and, highly stylised golfing blazers. One of which emblazoned on the back a large Scottish thistle motif with a golf ball and tee in the middle.

As one highly respectable member of the British media said after the show, there was a touch of the 'Last Days of the Romanovs' about the looks. The Astrakhan hats and dressing gown looks and the extraordinary pyjamas that bore the similar fresco's to that of the aforementioned coats summon up that particular milieu but it is undeniable that this is couture for men at its finest, a triumph of eccentricity and creative nous. It is Dolce & Gabbana revealing themselves even now after 30 years, to be at the zenith of their powers, and being that Alta Sartoria is relatively new, we can only assume that they are just warming up. 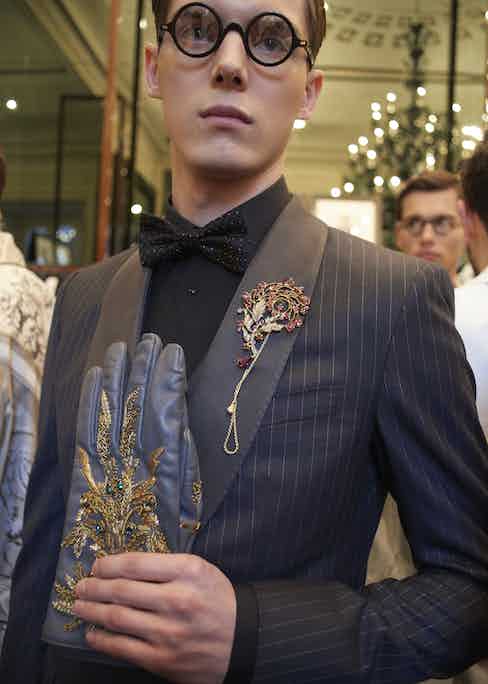 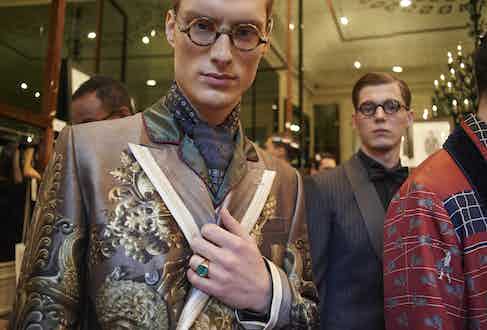 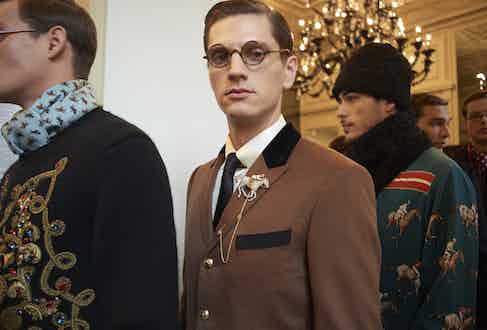 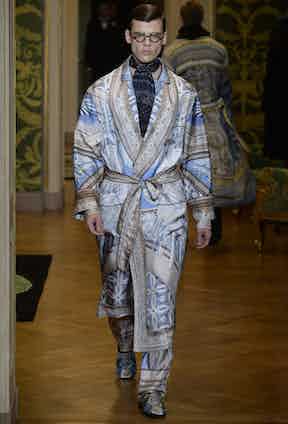 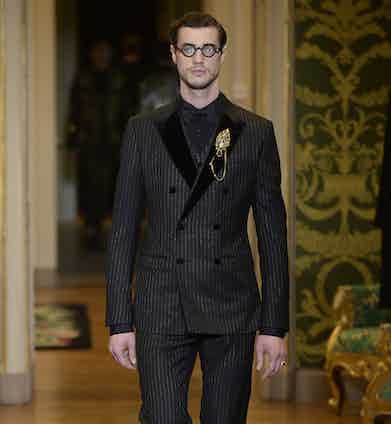 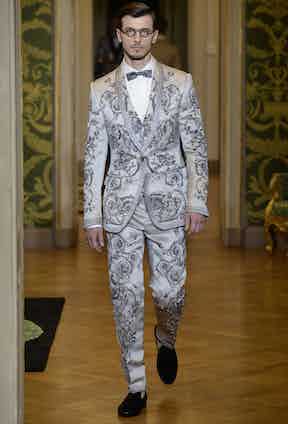 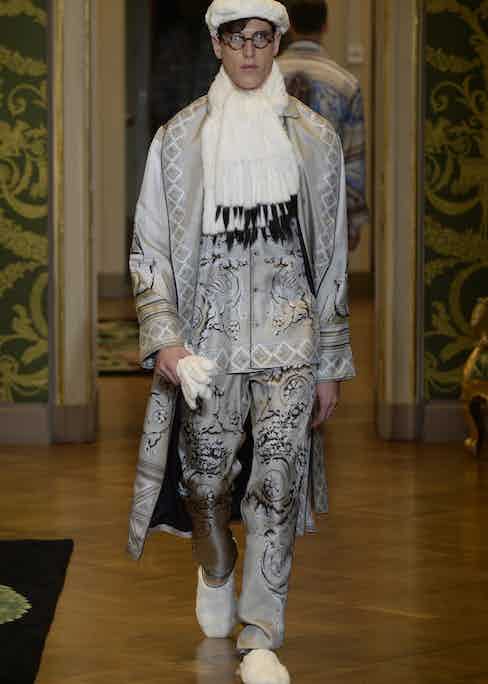 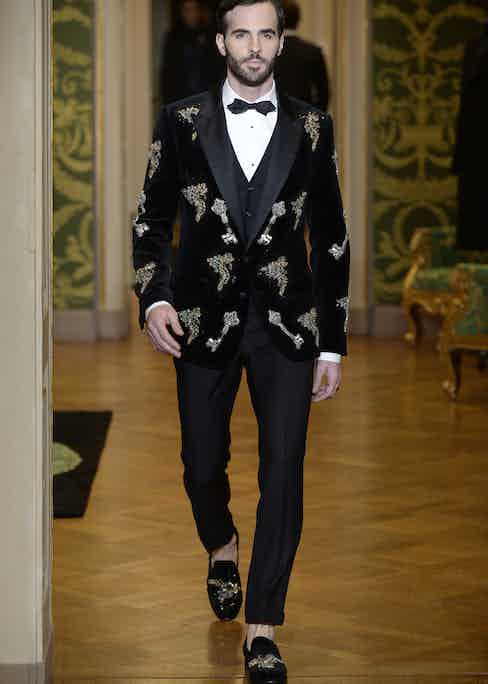