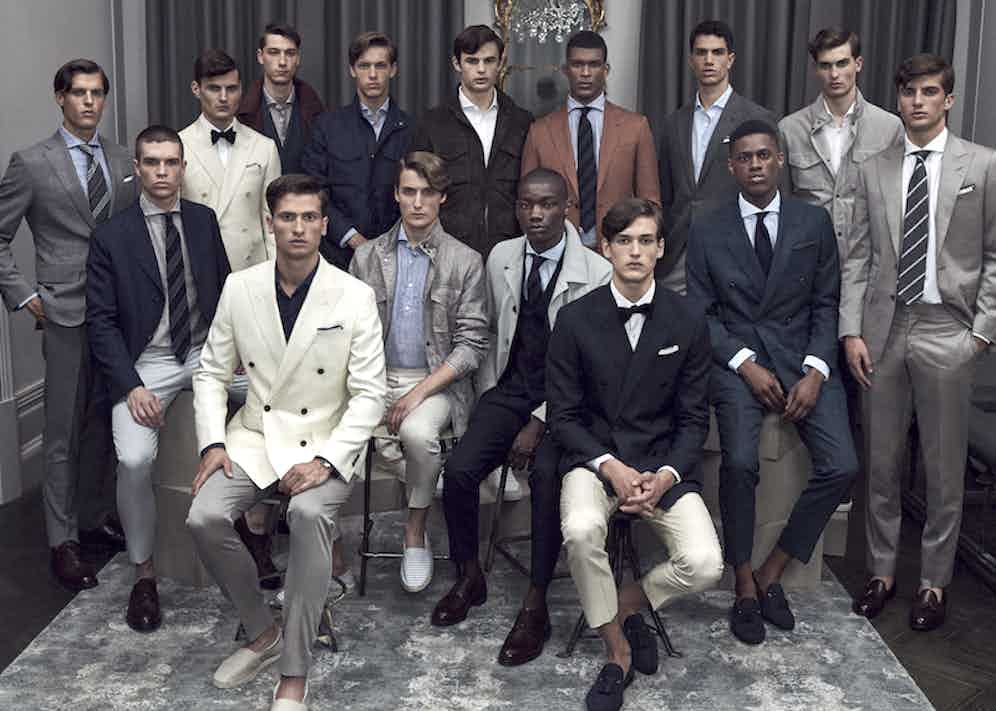 Make no mistake, Thom Sweeney SS17 has been something of a show-stealer this LCM. It’s a well-established fact in sartorial circles that the ever-talented Sweeney boys can do no wrong, but this particular collection really is rather delectable.

Inspired by the Talented Mr Ripley, a quiet confidence and sense of ease permeates the collection, and one senses a subtle shift in Thom and Luke’s approach to colour. The collection abounds with sophisticated textures, as always (with Italian wool-silk-linen blends the go-to fabric for jackets and trousers), but a new warmth of teal and terracotta complements the more classic palette of soft dove grey, beige and cool shades of blue. Stand out pieces include a blue-green super-lightweight melange lounge suit and striking terracotta herringbone two-piece with peaked lapels. Both simply crry out to paired with sneakers and simple navy T-shirt, for a distinguished, but distinctly versatile summer look.

Trim deconstructed double-breasted coats cut on the house’s unstructured model for summer is a strong signature; making appearances in navy, cream and tan. There are some apposite business-like touches in there too; with classic single-breasted shower proof macs and the staple grey two-piece in mid-grey fresco available for those in need of a professional wardrobe-lift.

What's more, there are also plenty of chic casual-formal evening looks; stand out pieces being a rather impressive double-breasted evening coat in a buff raw silk paired with simple black smoking trousers, or else a gorgeous matte navy cocktail coat with faced buttons paired with featherweight ivory silk trousers – it’s a proper day-to-evening cocktail look, equally at home in a top hotel bar, or at the evening reception of a South of France wedding.

On the more casual side, the pure linen safari jackets (a first for the house) are also rather dashing, again in eminently wearable shades of navy and beige. Sophisticated summery polo/shirting hybrids, with plackets that finish at the bottom of the breastbone likewise feel attractively breezy and slightly easier than a conventional long-sleeved shirt.

Essentially then, its yet another tour de force of contemporary British menswear – although its inspired by a distinctly American film and aesthetic – but that’s the joy of Thom Sweeney. It’s quintessentially British and yet feels thoroughly international at the same time. It’s clothing for the modern, effortlessly stylish man, and that’s enough for The Rake.