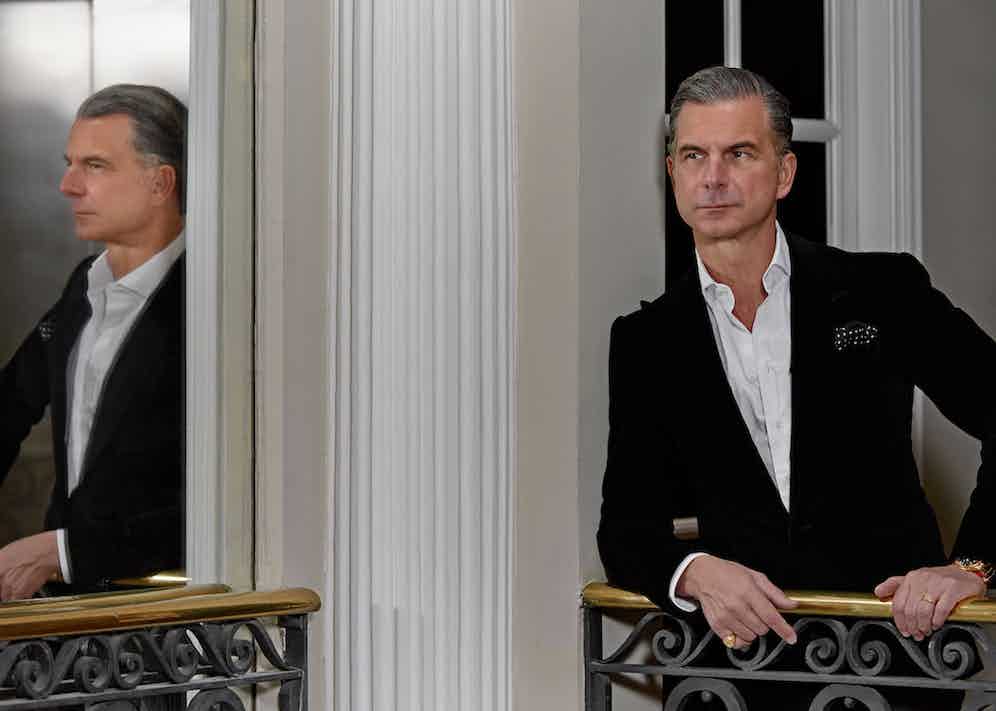 Cifonelli is a Parisian house of two halves, each of which empowers the other. Naturally, cousins Lorenzo and Massimo are the visionaries that oversee the house’s bespoke operations, and who have between them built the house’s bespoke atelier into one of the finest in the world. Of course, they also preside over the remarkable Cifonelli house style, with its iconic sculpted shoulders, trim chest, short skirt and refined silhouette. When it comes to translating the house’s bespoke masterpieces into ready-to-wear though, they call upon another menswear powerhouse, John Vizzone. The house’s Creative Director and ready-to-wear designer, Vizzone has over the past several seasons transformed Cifonelli into one of the most sophisticated ready-to-wear brands in Europe, offering extraordinary tailored designs and intelligent collections which bridge all the component parts of the successful, stylish man’s life.

The last two seasons in particular have offered a masterful richness of colour and pattern, complimentary textures and tone, presenting collections which envisage the Cifonelli man as a modern-day aristocrat with a confident yet refined understanding of men’s dress and an almost impossibly glamorous lifestyle. Vizzone has also refined the house’s ready-to-wear tailoring to the point where you’ll be hard pressed to tell a ready-to-wear Cifonelli shoulder from the bespoke – quite some feat. Even so, one can’t help but sense that Vizzone has just got started, and certainly if our exclusive interview with him is anything to go by, the Cifonelli presentation to come this morning is going to be something of a sartorial knock-out.

What can we expect to see in your AW’17 collection?

We're trying to move our vision of the Cifonelli man as a paragon of luxury forward again this season, so you'll see design that is rich and sartorial, yet tasteful. There are bold Prince-of-Wales plaids, there's plaid-on-plaid, luxurious mink fur collars on our overcoats, and we're experimenting with an ever so slightly elongated silhouette. The palette ranges across biscuit, camel and chocolate brown with touches of charcoal grey. We've also worked on a shooting cape and on some utilitarian outerwear pieces produced in super-lux fabrications.

What element of the collection are you most proud of and why?

Taking vintage elements of Edwardian dress and reinterpreting them for a modern gentlemen; the shooting clothes, strong three-piece suits, the dressy details are all inspired by the richness of the Edwardian tastemaker's wardrobe.

Have you incorporated any new fabrics, sourced from any new mills or merchants, etc.?

Interestingly, this season we have introduced some clever cloths from English mills (we have previously worked primarily with Italian mills) which are distinctly old-school but which channel that sense of traditional glamour I wanted to achieve.

How would you describe the collection’s aesthetic?

It's a modern interpretation of vintage prints and fashion plates.

What has been your main source of inspiration and why?

My main inspiration (quite apart from the collection's Edwardian quality) is the profusion of patterns on patterns, done in a way that stimulating and intriguing to wear. Experimenting with pattern is important, rather than wearing it in the same way from season to season.

Who is the Cifonelli man?

The Cifonelli man is a glamorous, sexy ,modern-day prince; a contemporary aristocrat with taste.