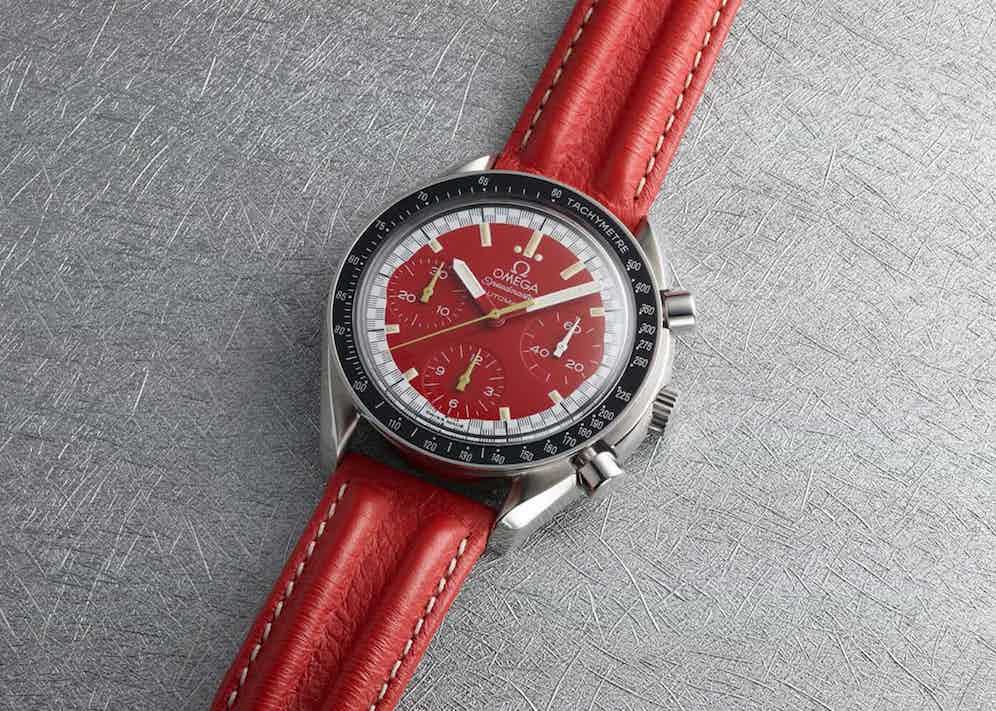 On the tail end of the 1980s, Omega decided it was about time to put a diminutive variation of their flag bearer, the Speedmaster Professional, into the market. This is the story of the Speedmaster Reduced.

Introduced in 1988, the Speedmaster Reduced ST 175.0032 was a 39mm twisted-lug steel case timepiece. Omega fit the watch with what they designated to be the automatic Caliber 1140. Essentially, Omega’s own assembly of an ETA 2890-2 with a Dubois-Dépraz 2020 chronograph module mounted to the dial-side and was gold plated. 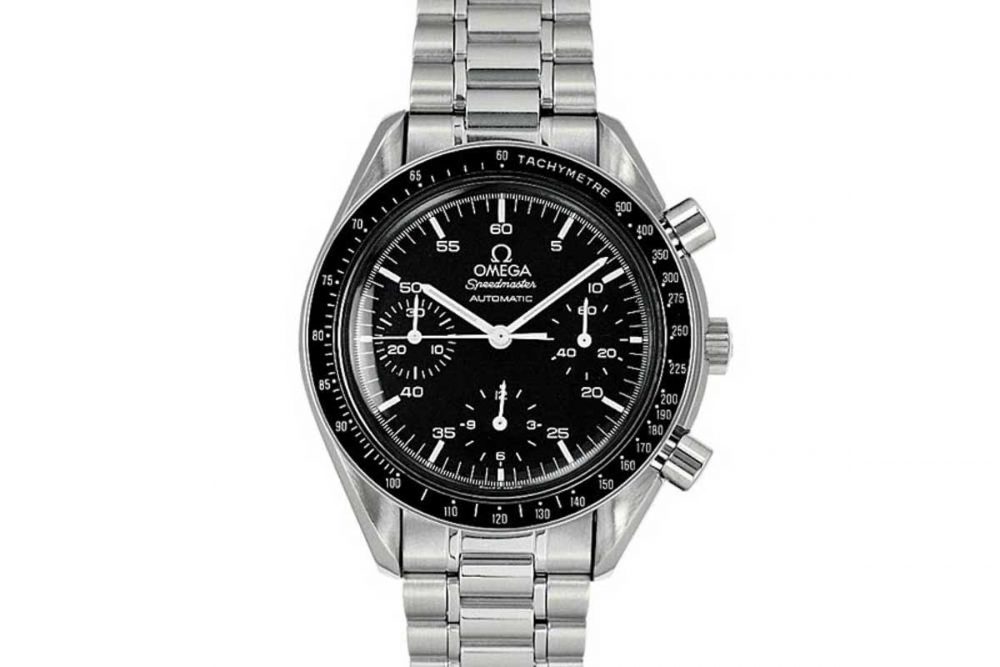 The Speedmaster Reduced from a distance, with its black dial and familiar case silhouette can — and often is — mistaken for its larger sibling, the Speedmaster Professional aka, the Moonwatch. But closer inspection of the Speedmaster will highlight some hallmarks that differentiate it.

Most obvious is the vast amount of space from the central pinion to the sub dials at 9 and 3 o’clock. The dial of the watch also reads “Automatic,” where you would otherwise have “Professional”.

And, of course, if you’ve handled enough Speedmasters, you would be able to tell on first contact that this is a significantly smaller case. Turning the watch to its crown-side, you’ll also notice that the crown and the chronograph pushers don’t line up. This asymmetry is the cause of the stacked movement construction. 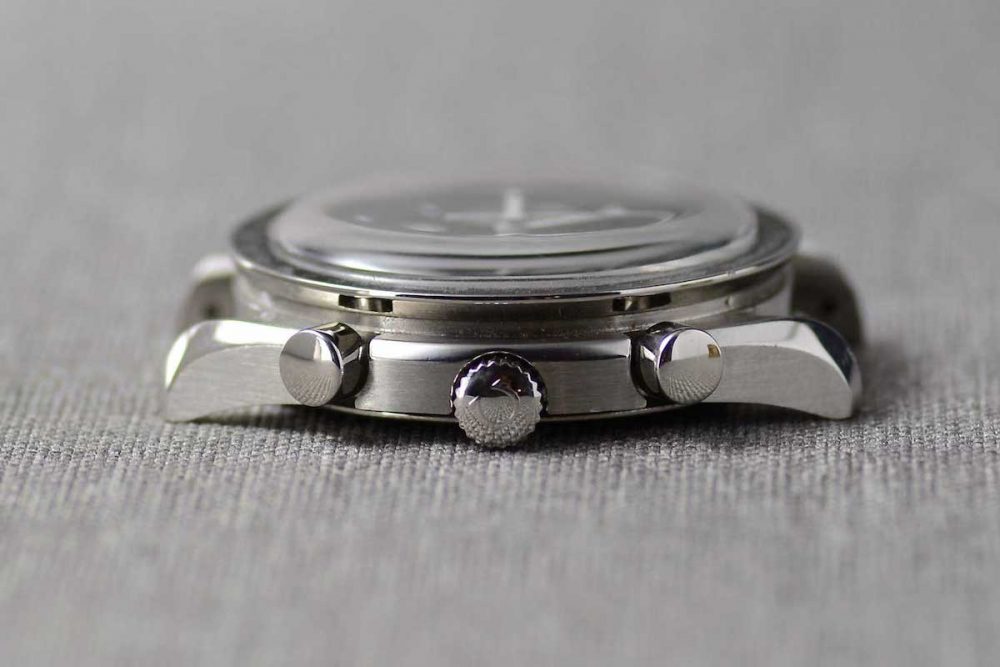 Crown-side of the Speedmaster Reduced case, showing the asymmetric placing of the chronograph pushers and crown due to the modular movement construction (Image: retrohorology.com) 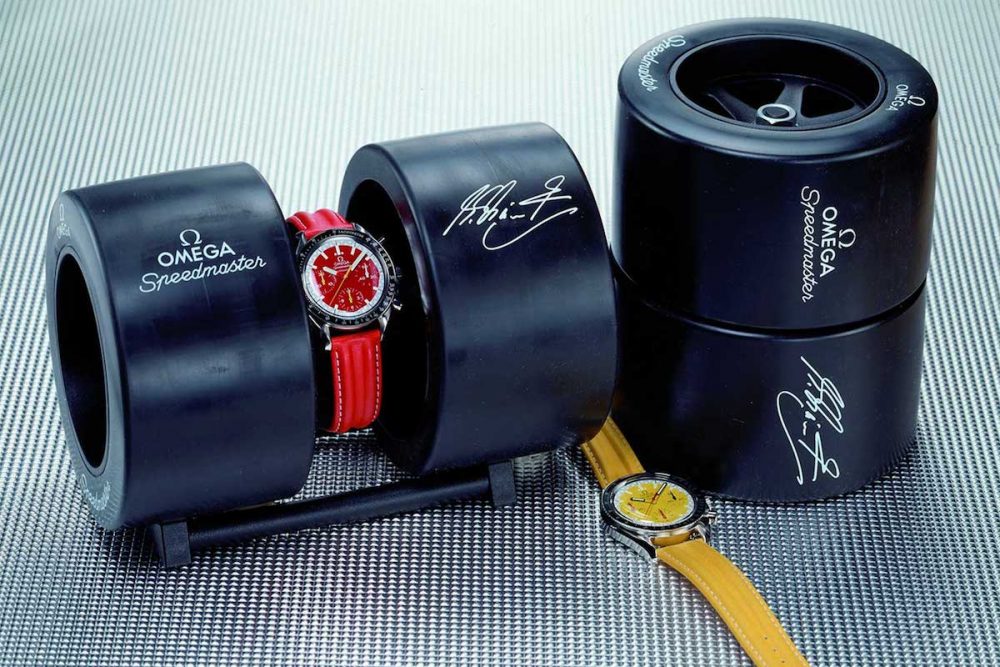 One such noteworthy instance within the realm of the Speedmaster Reduced is the 1996 Racing, which was launched by the one and only Michael Schumacher. The watch is considered such an important landmark in the Speedmaster lineage, that on the occasion of the watch’s 60th anniversary, of the many revered refences that Omega listed in the official timeline, this was the only Speedmaster Reduced.

In the brand’s own words speaking of the watch, it says, “This striking model is notable for its ‘younger aesthetics’ and was produced in both red and yellow versions. The piece was launched by racing legend Michael Schumacher who had become a new Omega ambassador in 1996.”

It goes on, “as well as featuring a racing-style minute track, the watch had a rubber presentation box that resembled the tyres of F1 cars and featured Schumacher’s signature in white.” 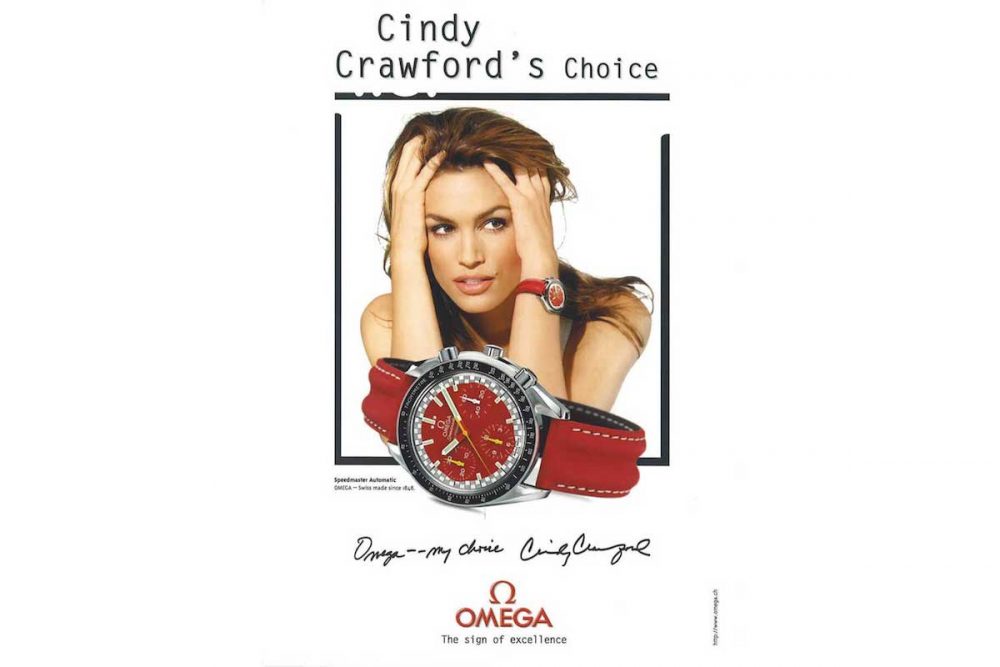 The association with Michael Schumacher was appropriate because let’s not forget that the Speedmaster was conceived in 1957 as a chronograph for race car pilots. On top of Michael himself, his younger brother Ralf Schumacher and even Michael Andretti were friends of the brand in this time.

When launched, Omega and Michael chose the karting track in Kerpen, Germany, for the official announcement. The very same track where Michael developed his skills as a young driver.

But let’s put aside the association with one of motor racing’s biggest names for a second. Looking at the dial of the 1996 Racing we can see that Omega had made an effort here to create a better balance with the positioning of the sub dials at 9 and 3 o’clock. That in itself just adds so much more appeal to the watch. Add to this, the striking “Ferrari” red, the racing seconds track and those broad hour and minute hands filled with a generous amount of Super-LumiNova. All in all, a compelling watch for any collector looking for quirky pieces from the Speedmaster’s timeline. Best of all, as these are incredibly under the radar at the moment, prices are soft like cotton candy. 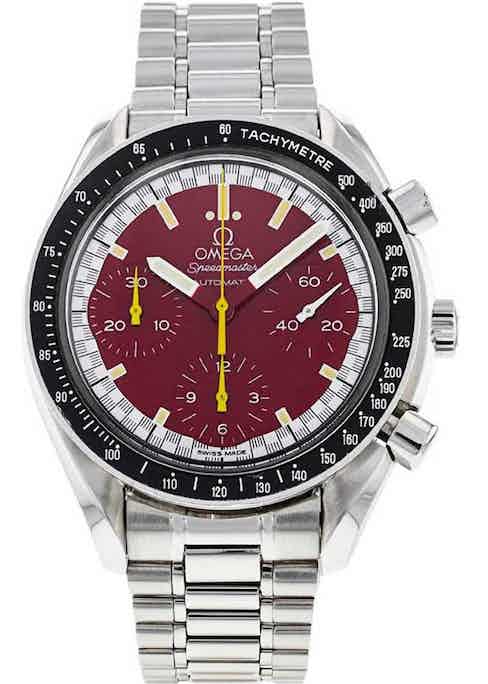 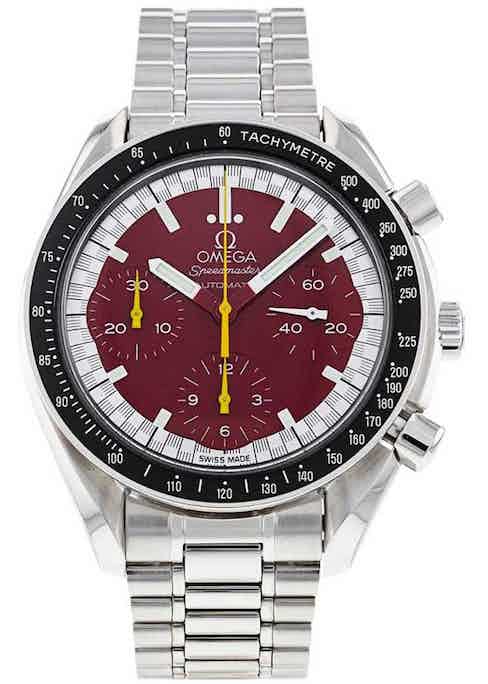 In a hallowed index created by with information compiled by the collaborative efforts of Marco Richon, Jean-Michel Malavieille and the one and only, Chuck Maddox back in 2005, the 1996 Racing watch is listed as the case number ST 175.0032.R00; PIC 3810.61 for the red dial and ST 175.0032.J00; PIC 3810.12 for the yellow dial. These references came on a double ridged leather strap, speculatively produced by Schedoni, the same guys who produced anything leather for Scuderia within that time and continue to produce leather interior for Ferrari’s civilian cars (among many other super car producers.

Check out the History of the Omega Speedmaster Index by Marco Richon, Jean-Michel Malavieille and Chuck Maddox, here.