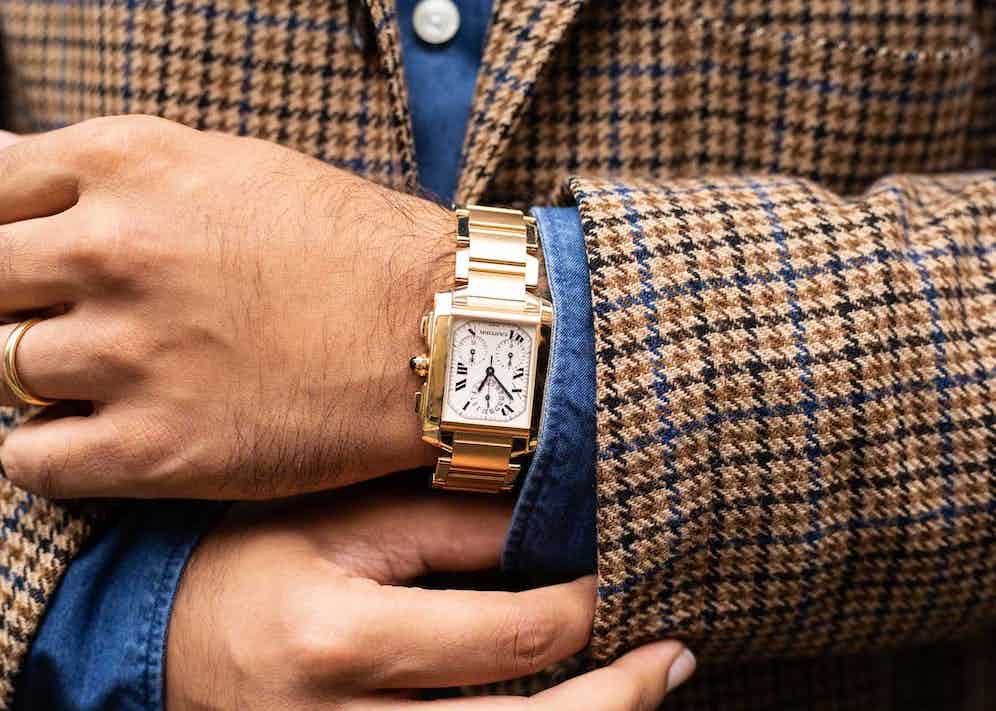 Born during the First World War, the Tank’s form was inspired by the fearsome machine that rendered horse-borne troops redundant. Because the armoured vehicle called the “tank” was a buzzword of its day in the way that “social media” or “streaming” define our technological present, it was a term with undeniable immediacy in 1917. The tank – weapon rather than watch – did for ground warfare what the then-new aeroplane was doing in the skies. Cartier thus demonstrated a sort of marketing savvy that’s still in use.

Where it departed completely from its military associations was in its unparalleled elegance. As practical as it proved to be, the Tank was handsome, having nothing in common with its utterly utilitarian namesake. The connection was forever limited to the look: The Tank (watch) resembles the tank (armoured vehicle) as seen from overhead, its extended sides recalling the slab-sided, first-generation tank’s parallel treads. 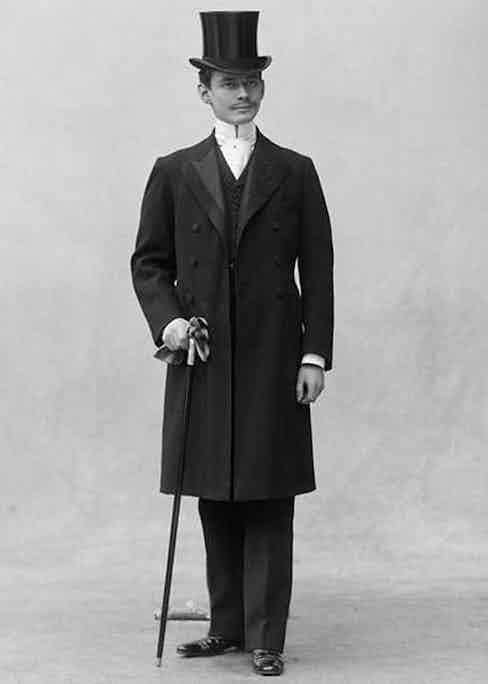 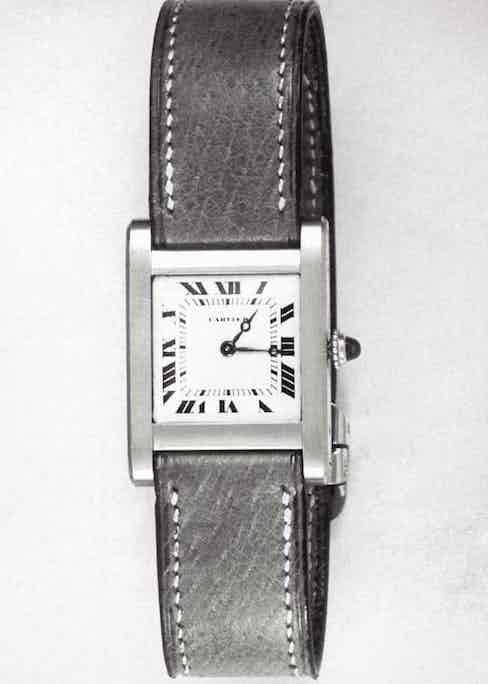 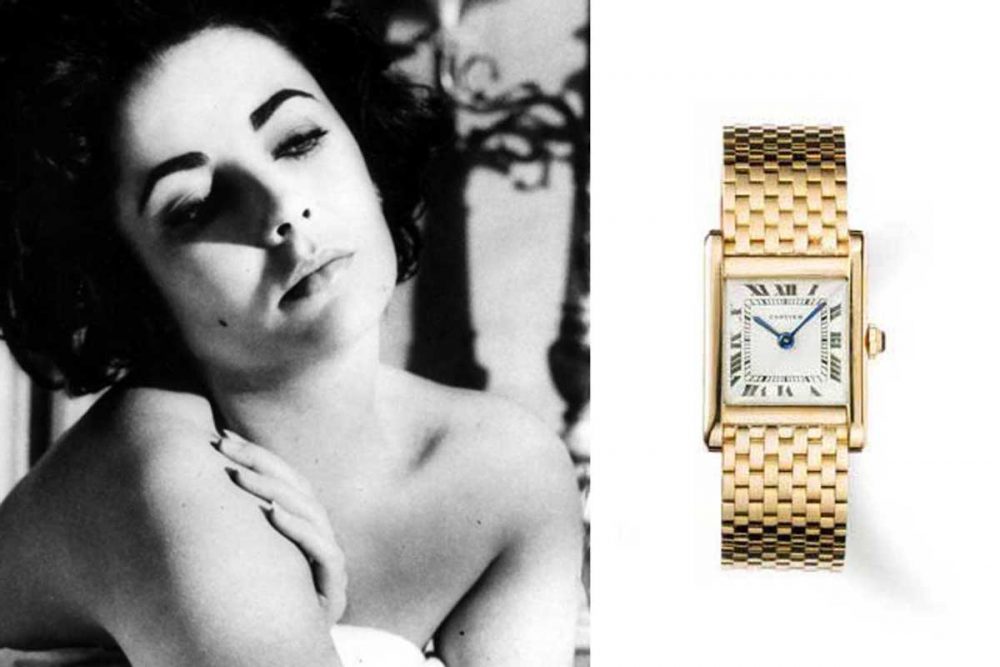 Small and elegant, it was unlike other wristwatches that followed in the wake of the Santos and the decade before its birth. What made the Tank so revolutionary was that it did not resemble the majority of early wristwatches: small pocket watches adapted to accept some form of strap. Reaching full production by 1919, the Tank not only heralded the arrival of the wristwatch as the new norm (though pocket watches would remain dominant until the late-1930s), it proclaimed the wristwatch as something modern.

In the beginning the watch was simply called ‘the Tank’, and Cartier at the time only had a few watches in their collection. It was only named ‘Tank Normale’, after the Tank Louis Cartier was created. The Tank Normale, which was never released in large numbers, was Elizabeth Taylor’s preferred watch for many years and she and also the Prince of Nepal, were both wearing their Tank Normale on a 5-row link bracelet, but in general the watch was sold on a leather strap. 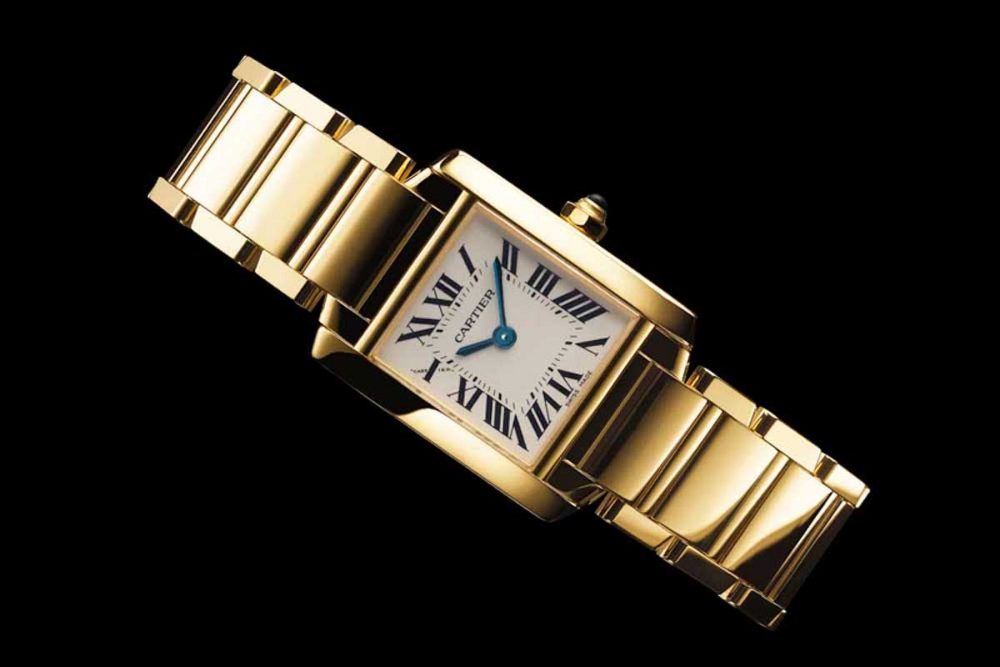 The Tank Française was the first Tank that was born on the drawing board, with an integrated bracelet. 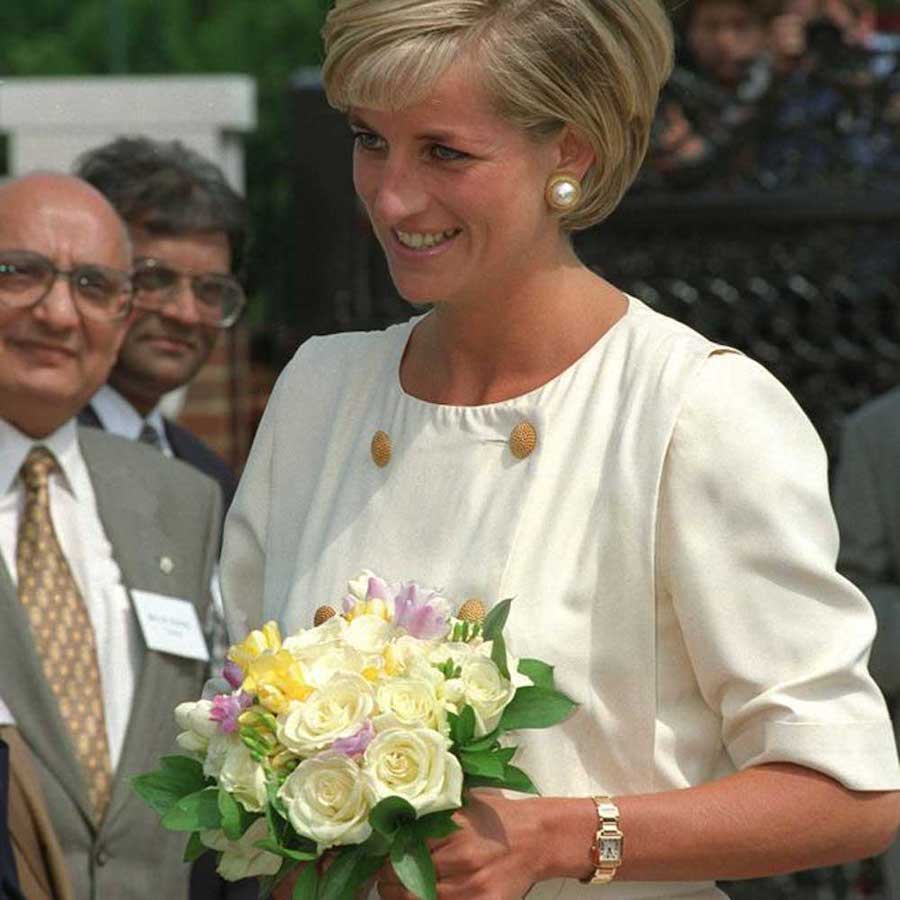 The Tank Normale was the inspiration for many future creations. The Tank Française (1996) for instance, created almost 80 years later, has quite some similarities. Six years after the successful launch of the large Tank Americaine in 1989, a watch that was designed for men and loved by women, Cartier did an even greater launch of a new Tank model; the Tank Française that was presented in Geneva in 1995.

Since the first day of the release the watch was available in four sizes, the two smaller ladies models with a quartz movement, the larger one with an automatic caliber 120 by ETA and the largest Tank Française model, the Chronograph powered with Piaget’s Chronoflex movement.

All four were presented in all yellow gold and in the, at that time, very popular mix of steel with gold. Just a year later, the Tank Francaise Collection was launched in all steel, which made the Tank Française the first real Tank watch that was available in steel. 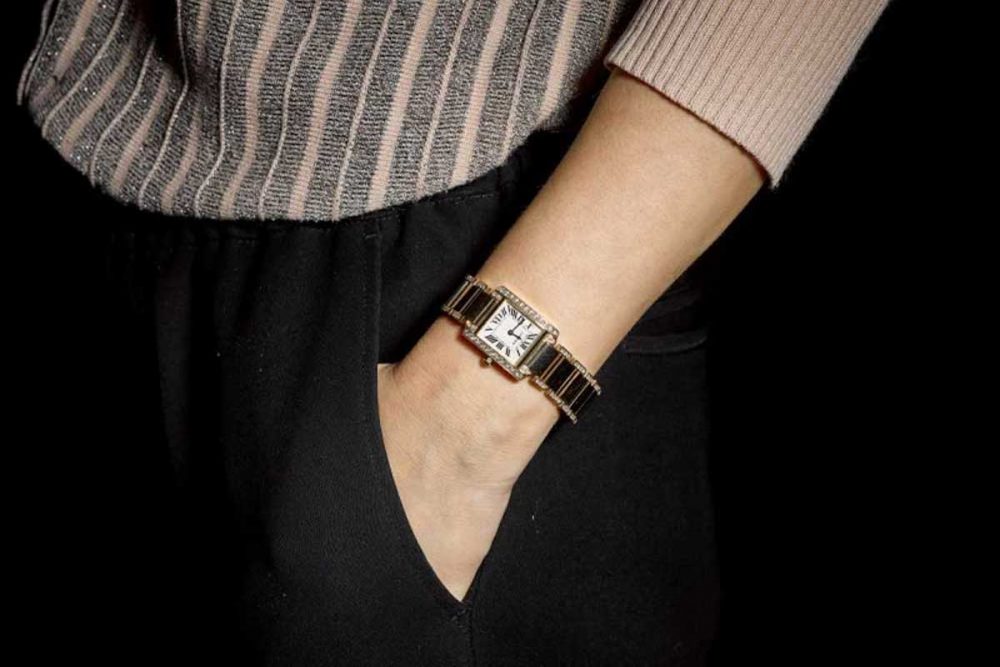 In contrast to the Tank Americaine, which was never made in steel, the Tank Française was available in solid gold, in all steel or in a mix of the two materials. (Image: Sotheby’s)

For some of the Tank models, Cartier has a bracelet available, but the Tank Française was the first Tank that was born on the drawing board, with an integrated bracelet. The way these links were designed and linked to each other, do remind and much more than any other Cartier bracelet, of the caterpillar tracks of the World War II Tanks.

It took more than a year before a few ladies models with alligator strap and deployant came into the collection. These non bracelet Tank Française models, were during the first years, only available as smaller ladies models in gold and the gold versions set with diamonds. Often a silk strap was used, to make the Française even more of an evening watch. Set with diamonds the watch and especially the large model, looks pristine. The Française is one of those Tank models that’s often seen as a jewelry watch and not only the ladies model.

In contrast to the Tank Americaine, which was never made in steel, the Tank Française was available in solid gold, in all steel or in a mix of the two materials, which made the watch within reach of a much wider audience. This move by Cartier paid off and the Tank Française became a ‘Must have’ watch, becoming, in no time, the best selling watch in the Cartier catalogue.

The Tank Française has proven to be a classic and the model has discovered an important place in the line up of Cartier Tanks. So this week, we have added two Tank Française models to our shop. One of them is a 20 mm steel watch from 2001. It features a silvered flinqué dial, blued-steel sword-shaped hands, sapphire crystal and steel bracelet. The watch comes with its original set of box and papers and a two-year warranty from Watchfinder. 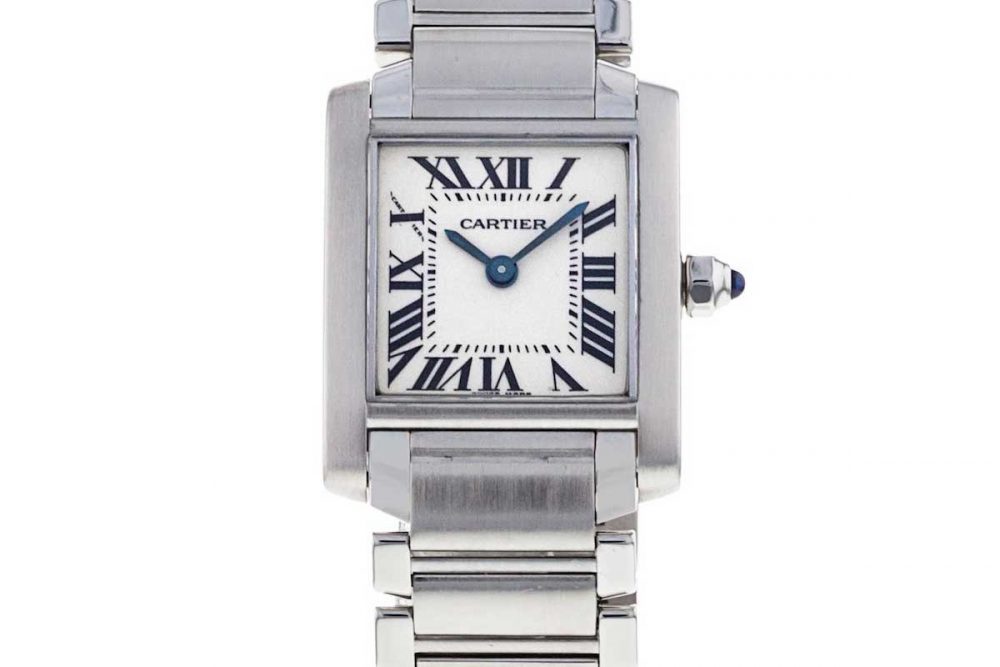 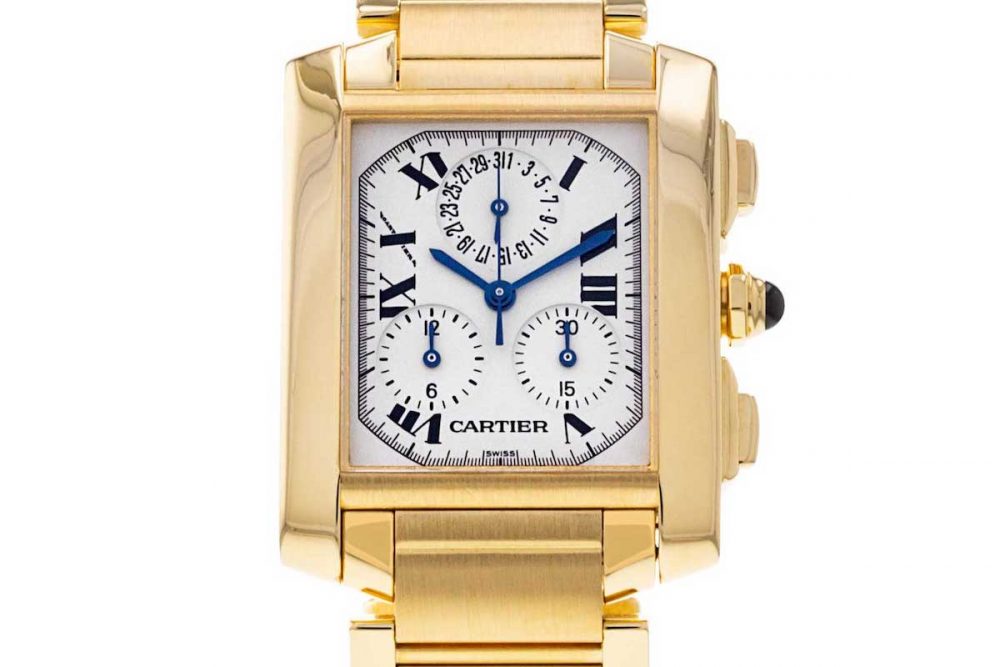 This Tank Francaise Chronoflex in our shop is from 2009 and it comes with a two-year warranty from Watchfinder. 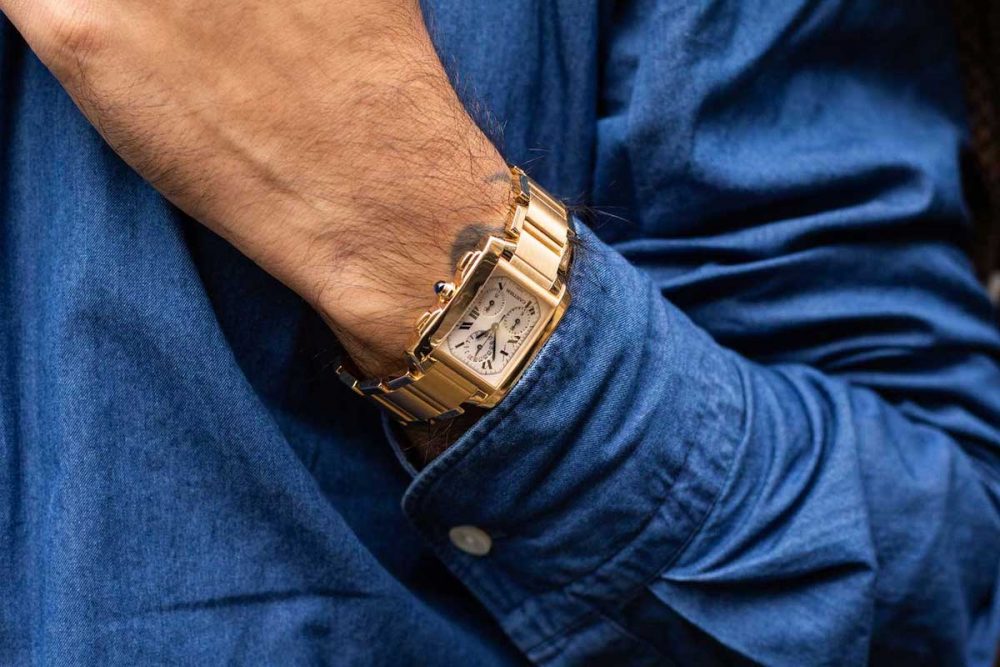 The other addition to our shop is a Tank Francaise Chronoflex from 2009. The watch has a distinct design with a date function at 12’o o'clock. Made of 18k yellow gold, it also features a chronograph function and is powered by a quartz movement. The watch comes with a two-year warranty from Watchfinder.