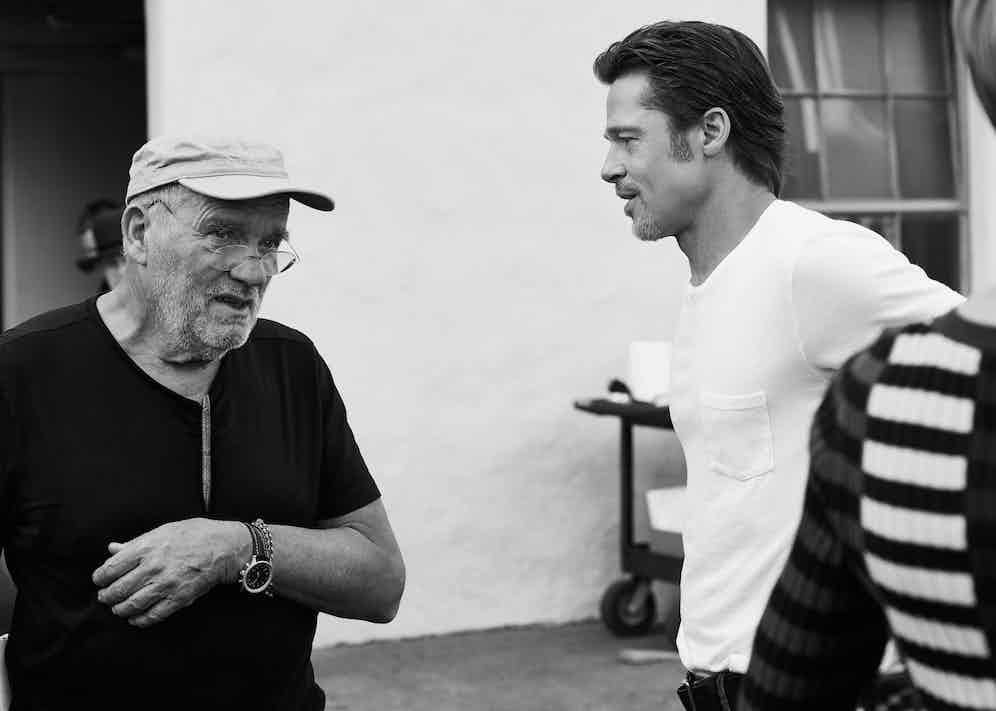 One of the most influential fashion photographers and portraitists of the modern era, Peter Lindbergh died on 3 September 2019, aged 74. The Polish-born, German-raised lensman pioneered a natural, casual, unretouched look that starkly contrasted the artificial, heavily made-up and airbrushed styling prevalent in glossy magazines for much of the 20th century.

In iconic early-’90s shoots for British and US Vogue, Lindbergh not only discovered the supermodels — he also liberated them from the bouffant hairstyles, de trop cosmetics, prissy settings and frou-frou garments that were de rigeur in the 1980s. His cover editorial for the January 1990 issue of British Vogue not only made the names of Linda Evangelista, Christy Turlington, Cindy Crawford, Naomi Campbell and Tatjana Patitz. Equally, but served as an aesthetic manifesto for Lindbergh.

When I interviewed him late last year, Lindbergh said, “My ideal was always a woman in just jeans, a t-shirt or shirt, and tennis shoes, with her hair tied back simply, like this.” He clapped his hands. “That’s it. The supermodels were a big deal, a social reaction against the images of women in magazines before then — that old concept of rich ‘sophistication’, a ‘nice’ apartment, furs, diamond earrings, all this kind of thing. It looked so false, like a painting. I hated that and I couldn’t photograph that.”

He said the first supermodels were highly intelligent, engaging women. “They were in possession of a purpose, they were able to talk about something other than fashion, they were excited about everything and wanted to be artists, to try something different — they were collaborators,” he explained. They were also in possession of such incredible natural radiance that Lindbergh insisted on the minimum of make-up and where possible, eschewed image retouching. He firmly believed that there could be no beauty without truth.

Somewhat counterintuitively, realism was what drew Lindbergh to photographing almost exclusively in black and white. “I used to think that black and white is an interpretation of reality, so a little bit of art comes into it. But now I think that it is about truth.” He suggested that the documentary photographers of the Great Depression changed our perception of the medium. “People like Dorothea Lange, they worked in black and white, they photographed the problems of America at the time and brought the pictures back to congress, where important laws were made based on these pictures — child labour laws and this kind of thing. In my head, I think now, black and white is linked to truth and reality.”

Lindbergh said he felt liberated by the greater agility the digital revolution has brought to photography. “All those professional guys who like to come with five tripods and six suitcases to do a picture, so they look professional? Well, they look a little old now,” he said. “I was always trying to find a way to shoot more accidentally or lighter, not forcing everyone to hold still in front of the tripod. I can’t do the tripod thing any more.” He did like to be well prepared for a shoot, he said, but it was more about “creating a space where anything can happen. You make all the preparations, and then when you start shooting, you forget about it all.” The most important thing when shaping images, Lindbergh said, is freedom. “I could never do movie following a script, from the second day I’d be in totally different places.”

In addition to photographing the biggest models of the past three decades, Lindbergh shot numerous leading lights from cinema, including Nicole Kidman, Uma Thurman, Jennifer Lawrence, Julianne Moore, Kate Winslet, Cate Blanchett and Angelina Jolie. “The main difference between actors and models is that actors have learned not to look into the camera, to kind of forget the camera. Whereas models are briefed to look into it,” Lindbergh said. “Sometimes it's really difficult to get an actor to look in the camera, you have to help them.”

He said he’d long ago ceased being star-struck by his subjects. “That has totally gone. Maybe with the Dalai Lama I would be a little shy for a second,” he thought. “But being shy is not a good way to start making a picture. You cannot come to take a photograph and feel like the underdog — although, at the same time, you shouldn’t be arrogant. Wim Wenders once said his attitude with actors is, ‘I don’t try to impress you, but you can’t impress me either.’ That’s a dynamic you can base the relationship on, you know?”

Lindbergh and I met at the launch of his campaign for Breitling, featuring his photographs of Brad Pitt, Charlize Theron, Daniel Wu and Adam Driver. Like all successful photographers, Lindbergh’s career was a mix of editorial and commercial work, shooting ads for the likes of Dior, Prada and Armani. He considered both equally legitimate uses of his skills. “I once had a discussion with ArtForum magazine,” Lindbergh recalled. “They asked the question, ‘When you create a work to order, to a commission, to a specification, how can that be art?’ I replied, ‘Well then, the museums are going to have to throw a lot of paintings out, because Titian, Michelangelo, all these guys, they all worked on demand.’”

Of the old masters, Lindbergh joked, “Can you imagine the whores they were? They were all fighting for places on courts and painting whatever the king or the lord liked. They would get a detailed contract for every painting — for how the picture would look, ensuring the king’s woman would not look fat or ugly, even though she probably was. It was kind of Photoshop on contract, before Photoshop existed.” The late, great Peter Lindbergh, meanwhile, built a career upon keeping it real — championing naturalism, rendering the truth in plain black and white.