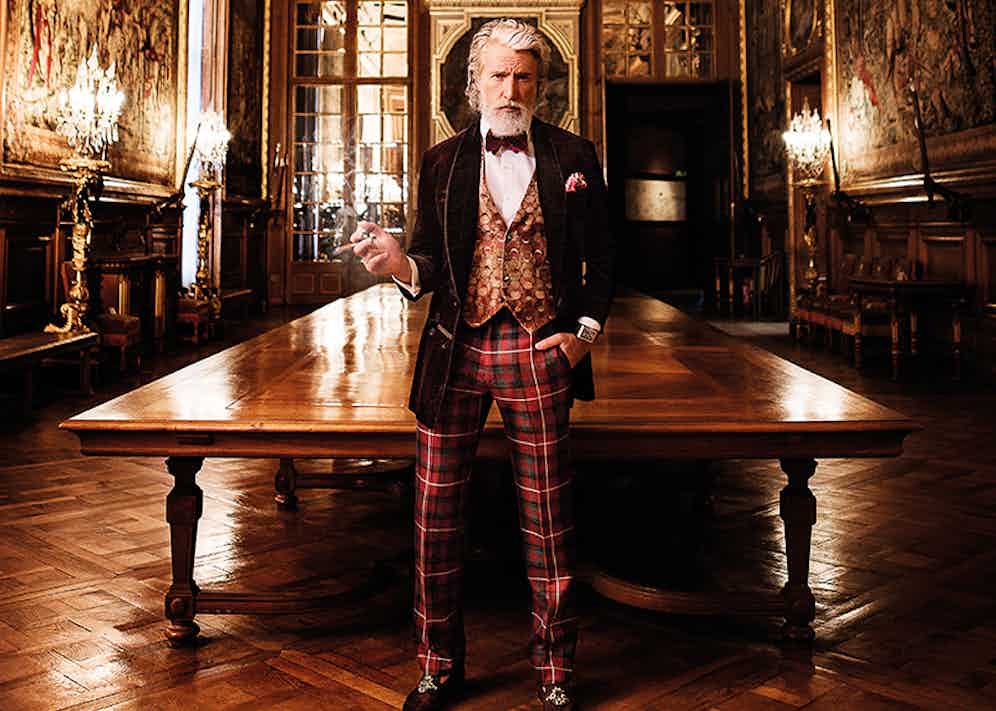 “Is this really work?” I hear myself ask, as I sit down in one of my favourite little smoking terraces (or to give its official title, Comfortable Outdoor Smoking Area or COSA for short) on a Sunday afternoon to write this next article.Since the introduction of the Smoking Ban in 2007, which hit the UK cigar industry very hard, cigar friendly establishments have gone out of their way to create terraces which are designed to allow smokers a refuge to enjoy their favourite past time.They have comfortable seats, heaters, blankets and proper cigar ashtrays – what more can we ask for? The answer to my question at the beginning is of course a resounding “No”.

I’ve chosen one of the grandest and largest cigars from the Habanos portfolio.The Cuaba Diademas stands head and shoulders above nearly all the current vitolas, bar the more slender gran corona (Montecristo A and Sancho Panza Sancho) by nearly 2 inches. Cuaba is unique amongst the Habanos brands today, as they only make one shape of cigars.Cuaba specialises in a shape called the Perfecto.This is a cigar that is tapered at both ends.The head of the cigar is capped like a piramides.The foot of the cigar is tapered but, a small area is left open (so you don’t light the wrong end).Back in 1996, when this shape was revived by Cuaba, the cigars were completely rolled freehand without the use of a mould.Each box would be filled with cigars which were shaped just a little bit differently from each other. After just one year, moulds were introduced to standardise the shapes.

These cigars have 12 years ageing on them - my head says if they draw well, it should be a decent smoke. Selecting one of the wooden boxes by random, I slide the lid open and remove the small insert of cedar wood.What lays before me is still a surprise, as the entire cigar is wrapped in aluminium foil from head to toe simply adorned with the Cuaba band (this also tells me which end is the head as the band is always positioned closest to the head on cigars).I unwrap the foil from the foot to halfway and gently pull the foil off from the head to reveal a resplendent gargantuan beast of a cigar. I’m lucky to be doing this tasting early on a Sunday as the terrace is empty for all but two chaps.Why lucky? I can hear them literally drop their jaws when I reveal this cigar on the table. Cigar envy is real!If you want a cigar that will turn people’s heads, the Cuaba Diademas is just that cigar.It’s definitely not for your ordinary mortals.The wrapper shade is a classic Colorado with fine veins and no sunspots or discoloration.The foil has helped the wrapper retain its oils, so there is still a fine sheen of oil over this cigar.

The Perfectos shape is probably the hardest of all shapes to roll.It is very easy to twist the filler at either end and plug the cigar, making it unsmokeable.Fortunately as I gently squeeze the cigar along the foot, body, band and head, I can feel nothing that rings my alarm bells.

There’s a common misperception from inexperienced smokers when they have a Perfectos and that is they expect the draw to be like a regular straight sided cigar (fairly easy).As both ends are tapered, there is always a restriction in the draw.When you light the Perfectos, the first half inch is usually a little difficult as it is the narrowest part of the cigar.Persevere and you will find that as the burn passes the widest part of the cigar at the foot, the draw opens up.

The cigar burnt evenly throughout and did not require any relighting or touching up.The ash was fairly solid throughout.After lighting, the ash did fall after just half an inch but, then stayed solid for 2-3” sections.Ash colour was a darker grey with black rings.

I class myself as a bit of a wet smoker.This means the moisture from my lips often goes on to the cigar.By looking at the head of your cigar, it is easy to see if you are because the head will be much darker than the wrapper or filler.With longer cigars, I find this excess moisture along with the natural moisture in the cigar, oil and nicotine tends to restrict the draw after about an hour.For the less experienced, they would probably complain and say the cigar is bad and they cannot draw well anymore.There is a simple remedy, re-cut the cigar.Taking just a couple of millimetres off the head will remove the wet tobacco and it will draw again like new.

This particular Diademas delivers the flavour profile I was expecting from such a long cigar – gentle, progressive and ending with a slap to your face.The pre-draw teases my palate with gentle flavours of cedar wood, leather and tobacco.

The first third is a fair medium with little signs of bitterness (spending 12 years in the Ageing Room of Davidoff of London has probably helped too).The flavours are consistent with the pre-draw.I focus on the early part of my cigar as I have to listen to two young English chaps whine to the hard working waiter about paying a minimum spend, when it was quite clearly explained to them before they ordered.

Thankfully by the second third, they have left and I have the whole terrace to myself.I sip away on my usual tasting beverage combo of black Earl Grey tea and Coco-Cola.As the second third develops, sweetness enters the scene in the form of toasted almonds, there’s also a small hint of sweetened espresso.

Before I start the final third, I tap the ash and re-cut my cigar.The draw has closed up and I can feel the change in resistance hamper the enjoyment of the cigar.Straight away I can see the difference in the smoke production and blow out several voluminous mouthfuls of smoke.I cannot start to explain the pleasure of smoking a cigar in solitude as opposed to with company.Your attention is focused on the cigar and your senses are tuned in to help you maximise this rare occasion.My only distraction is watching the highlights of penultimate day of The U.S. Masters on my iPhone.The first two thirds of the cigar’s flavour has been gentle and with a gradual change in strength.As I smoke my way through the final third, there’s a definite step up in intensity of flavour and nicotine on my tongue.Medium-full has been achieved.Intense coffee is mixed with sweet cedar and lots more leather.

I’ve had a wonderful lazy Sunday afternoon smoking this Cuaba Diademas and that final third left me a little light headed.Thankfully a few sips of Coca-Cola straightened me out.I felt like I’d conquered Everest after finishing this cigar in one go. This is a cigar you must put aside at least 2-2.5 hours for.Even Winston Churchill would be impressed watching you puff away on this 9” behemoth.Some people might prefer to smoke two cigars in the same time period but, if you can, why not?The construction of this Diademas was first class.No issues with draw or burn, no need to relight.The flavour was smooth and there was a steady development in strength, building from a medium to a solid medium-full in the last third.I enjoyed the flavour of this cigar as it started off with a slight sweet woodiness and built into cocoa, toasted almond, wood and leather at the end.The 12 years ageing had removed any bitterness from the tobacco.The Perfecto shape offers the smoker a different experience in terms of draw.The Diademas has a little brother called the Salamones, which is a vitola I really like to smoke.Seek these cigars out at your local cigar specialist and enjoy before they disappear. 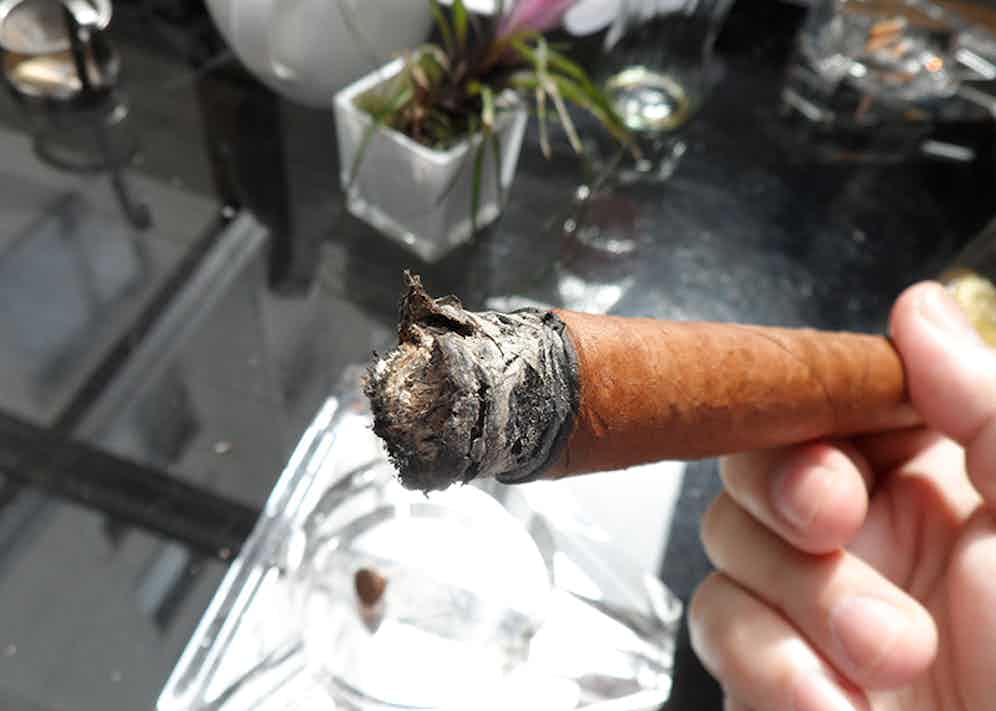 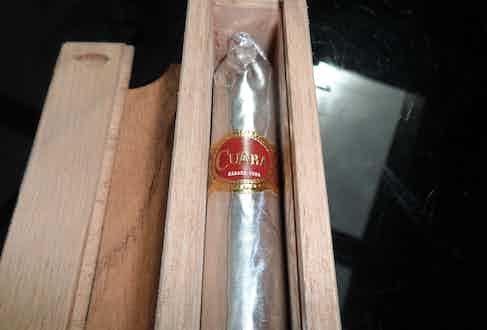 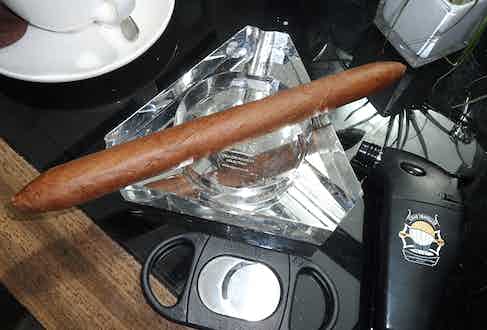 I always have a little bottle of hand sanitiser with me, as I do not like to handle cigars without clean hands.If I may offer readers just a few pearls of wisdom as a cigar retailer about handling cigars:

Sanitise your hands before handling cigars

Handle cigars with respect and carefully, they are fragile

Give cigars a gentle squeeze, do not try to pinch your fingers together as you will damage the cigar, you are looking for a cigar that will spring back into shape

DO NOT roll and squeeze the cigar next to your ear.You can make just about any cigar crack if enough force is applied, it doesn’t sing to you and you can’t hear the ocean