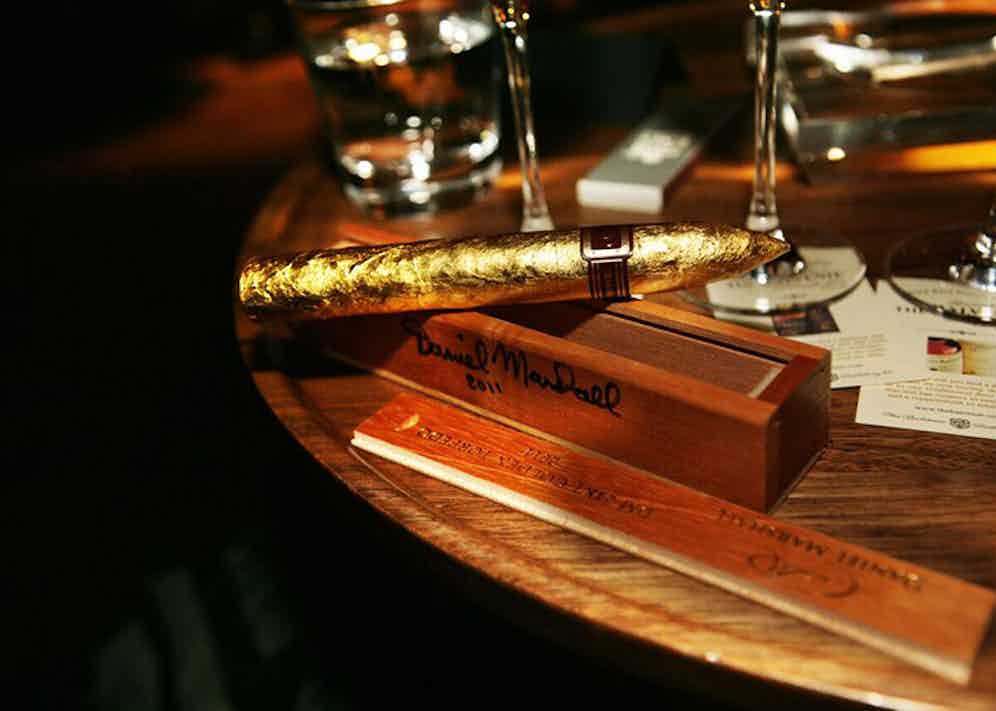 “Lights, camera and ACTION!” is the phrase that really captures the cigar I am tasting today. The Daniel Marshall 24kt Golden Cigar is as bling, bling as it gets in the cigar world.Designed to be the ultimate celebration cigar, it has been enjoyed by many actors, actresses, sports stars, musicians and politicians – I added one of Daniel’s Golden Cigars to a humidor that Edward and Eddie Sahakian prepared for a cigar loving former U.S. President.

Daniel Marshall is based in California and has a long history as a craftsman and carpenter. His entry in to the humidor world came about in 1982, where at the tender age of 19, this young man took the plunge and flew from California to New York to show the chaps at Dunhill his first humidor.After several unsuccessful attempts to make an appointment, Daniel decided to take the bull by the horns and marched in to the Dunhill building and demanded an appointment. It worked, however Dunhill were not so impressed with his humidor.Unperturbed, Daniel managed to have a productive meeting with Dunhill and walked out with a $250,000 purchase order!Due to corporate bureaucracy, Dunhill cancelled the order 3 months later.To most, that would have been the end but, Daniel did not give up.Next stop was Dunhill HQ in London.Again, Dunhill said that his humidor did not meet Dunhill quality.He asked for a list of what needed to be changed and 24 hours to re-present the modified humidor.Dunhill accepted.The next day, Daniel Marshall became the official architect of Dunhill humidors and over the next 30 years, Daniel is still making exotic and detailed humidors as well as globally known cigars under his own label of DM Red Label from Nicaragua.

So how do you come up with a cigar like this?Daniel was called in to a meeting with Al Pacino and Universal Studios to create 100 limited edition humidors to commemorate the Blu-Ray release of one of their most successful releases ever, Scarface.Daniel knew he could make a beautiful humidor but decided no mortal cigar could fill the humidor.He wanted something so unique and ostentatious. Daniel came up with possibly the most outrageous and extravagant concept for a cigar ever; a golden cigar!

Daniel brought together the best from Dominican Republic and Nicaragua to produce the cigar for him.Manuel Quesada and Nestor Plasencia came together to create a blend which would offer the smoker the elegance and finesse of Dominican Republic tobacco and the body and depth from Nicaraguan tobacco.Daniel selected the cigars with the smoothest of wrappers, only 10% of what was produced made the cut.Before the gold treatment, they were sanded down again with very fine sandpaper.Protruding veins and bumps make the gold application difficult.Daniel selected the edible 24kt gold leaf from Italy’s number one gold leaf maker since 1820, a sugar paste is used to fix the gold leaf in place over the entire body of the cigar.It takes 25 sheets of gold leaf to cover one cigar! Daniel created these as a limited promotional production in 2011, each presented in an individual varnished wooden box signed and dated by Daniel.

There’s something very special about cigars in individual slide lid boxes for me, perhaps it’s just the extra attention to detail?The Golden Torpedo is presented in an individually varnished slide lid box with gold inscriptions and signed by Daniel.Opening the box, the resplendent and shiny Golden Torpedo gleams at you like a lighthouse.As with nearly all New World cigars (I use the term loosely for any cigar that isn’t Cuban), it is wrapped in cellophane. I extract the cigar from the cellophane and I have, literally, a stick of gold in my hand.The cigar feels slightly heavy for its size, perhaps that’s just psychological? The metallic feel in my hand is strange but, it is a thing of beauty.All but the foot of the cigar is covered in 24kt gold leaf.It shines brightly in the sunlight and the striking yellow of the gold leaf is resplendent. The Golden Torpedo resembles a bullet that Scaramanga would have used on James Bond given half the chance.It’s smooth and sleek golden wrapperlooks like no otherI’ve come across (and I’ve seen Swarovski covered cigars!).The cigar also feels very solid, again that’s just the gold leaf.

It was difficult to give the cigar the usual squeeze tests as it felt very solid.I couldn’t really detect any knots or large veins that might cause hindrance in the draw.Before cutting, I just put the cigar in my mouth to see how it felt.Gold on the lips is an odd sensation, the cold metallic feeling confused me.I knew there was a great Nicaraguan cigar hiding underneath.One question I have been asked about these cigars is, “do you peel the gold off to smoke it?”Quite simply, no.As the gold leaf has a higher melting point than tobacco (1064 degrees Celsius to 500 degrees Celsius), you get golden ash.A novelty in itself, although theoretically you could take the ash to a smelter, burn off the ash and go home with gold leaf.

I used the Xikar X75 cutter to cut the Golden Torpedo with a straight cut, roughly quarter of an inch off the top. I took a pre-draw and the draw was ok, a little tight.I knew I would have to re-cut the cigar later and expected the draw to improve as the cigar warmed up and the tobacco expanded.

The biggest difficulty I had with this cigar was keeping it lit.I used a powerful single flame Colibri jet table lighter, which is excellent with cigars – usually.I knew a match wouldn’t cut it and really thought the power of the jet lighter would do the job but, I was wrong.Normally, you don’t have to draw on a cigar more than once a minute to keep it lit.With the Golden Torpedo, think every 20-30 seconds.I also heard that the use of a triple flame was the lighter of choice for the Golden Torpedo and wished I had found that out before the tasting.Relighting cigars does change the flavour of a cigar and I must have relit the cigar 15-20 times during the tasting.This was a little frustrating.

Smoke production was about 6/10 to start.I did labour a little with the draw and perhaps should have re-cut earlier to give myself a bigger draw aperture.Around half way, I had to recut as the draw tightened up as the tobacco at the head became over moist.Smoke production immediately increased to 8/10.Nice big clouds of grey smoke now.

As gold conducts heat, there is a tendency for the cigar to overheat if smoked quickly.You are stuck between the proverbial rock and hard place with this cigar.You need to smoke quicker than normal to keep it lit but, since you smoke quicker, the cigar heats up quicker and burnt fingers and lips are a real possibility.

I will admit I am still learning about New World cigars, I’m big enough to call myself a novice.The bewildering number of brands dwarfs the Cuban ones.Since 2013 I have attended Intertabak with my good friend and cigar aficionado, Didi Hoffman.Intertabak is the largest tobacco trade festival in Europe, some say the world.New World brands are well represented here.Over three days, I get to smoke 6-8 New World cigars a day.At present, I would say I like only 1 or 2 of them per day.Cuban tobacco is my tobacco of choice, as it was the tobacco I first smoked and fell in love with.However, New World producers have a skill that the Cubans don’t have and that is the ability to blend tobacco from different countries.Because of my Cuban smoking experience, I am always looking for something that is sadly missing from the flavour development of New World cigars I have encountered.My expectations are different for New World cigars and learning to stop comparing them to Cubans was a big step.I focus on the complexity of the flavours, strength and flavour consistency (draw and construction are usually impeccable and better than Cubans in general).

Obviously from the outset, there is no smell of the wrapper due to the gold leaf covering.The small part of the foot that is uncovered allowing you to light it.I use a straight cut for the torpedo, as there is no cap line due to the gold leaf, I make a conservative cut ¼” from the head.The pre draw reveals chocolaty sweetness, more milk than dark, there’s also a little earthiness with just a background of coffee.

I light up and the first thing I notice is that my brain is searching for the wrapper taste on my lips and of course there isn’t one due to the gold leaf.My palate and nose will be doing all the work.The smoke is grey and construction is decent.What I do detect as I smoke and after each time I light up, is a metallic odour of the gold burning.There’s an early bitterness but, that’s due to the lighting.

The flavour is reminiscent of Nicaraguan cigars I’ve smoked in the past but, there was something different about it.Nicaraguan cigars are renowned for their strength and big flavours.I can definitely taste the influence of Manuel Quesada here as the tobacco flavour has a lighter flavour than I expected and there were more sweet and creamy notes in the second half of the cigar.

The general consistency in the flavour was noted throughout the cigar.Apart from the early burn effect and the after taste of relighting the cigar, the taste was medium to medium full.The cigar was well rolled by Plasencia and the blend is very agreeable.There was also a toasted almond flavour in the latter part of the cigar.

If you take the cigar for what it was designed to be, then you have a fantastic gift in your hands to smoke when you make that million pound deal, have your first child or land that mythical hole-in-one on the golf course.Even better is to buy the travel humidor which has the five box presentation version and enjoy it with four friends.Who isn’t going to be wowed when you open the beautifully crafted travel humidor and they open the slide lid boxes?

I’d definitely like to retry this cigar with a triple flame cigar and a deeper opening cut.I’ve smoked most of the standard DM Red Label line and have enjoyed them.The Golden Torpedo was an interesting smoke and definitely had something else in the flavour, not found in the standard range.

This cigar is straight out of Hollywood and doesn’t take itself too seriously.What other cigar can say it was conceived by the minds of Al Pacino, Universal Studios and Daniel Marshall? “The World is yours” as Tony Montana said. 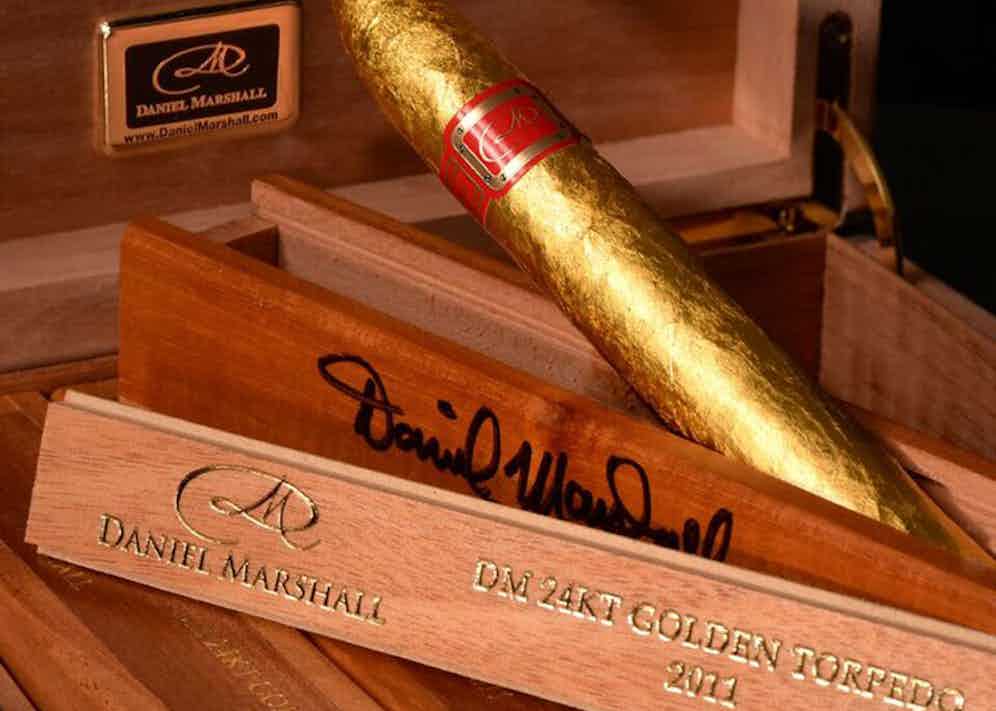 If you take the cigar for what it was designed to be, then you have a fantastic gift in your hands to smoke when you make that million pound deal, have your first child or land that mythical hole-in-one on the golf course.Even better is to buy the travel humidor which has the five box presentation version and enjoy it with four friends.Who isn’t going to be wowed when you open the beautifully crafted travel humidor and they open the slide lid boxes?

I’d definitely like to retry this cigar with a triple flame cigar and a deeper opening cut.I’ve smoked most of the standard DM Red Label line and have enjoyed them.The Golden Torpedo was an interesting smoke and definitely had something else in the flavour, not found in the standard range.

This cigar is straight out of Hollywood and doesn’t take itself too seriously.What other cigar can say it was conceived by the minds of Al Pacino, Universal Studios and Daniel Marshall? “The World is yours” as Tony Montana said.