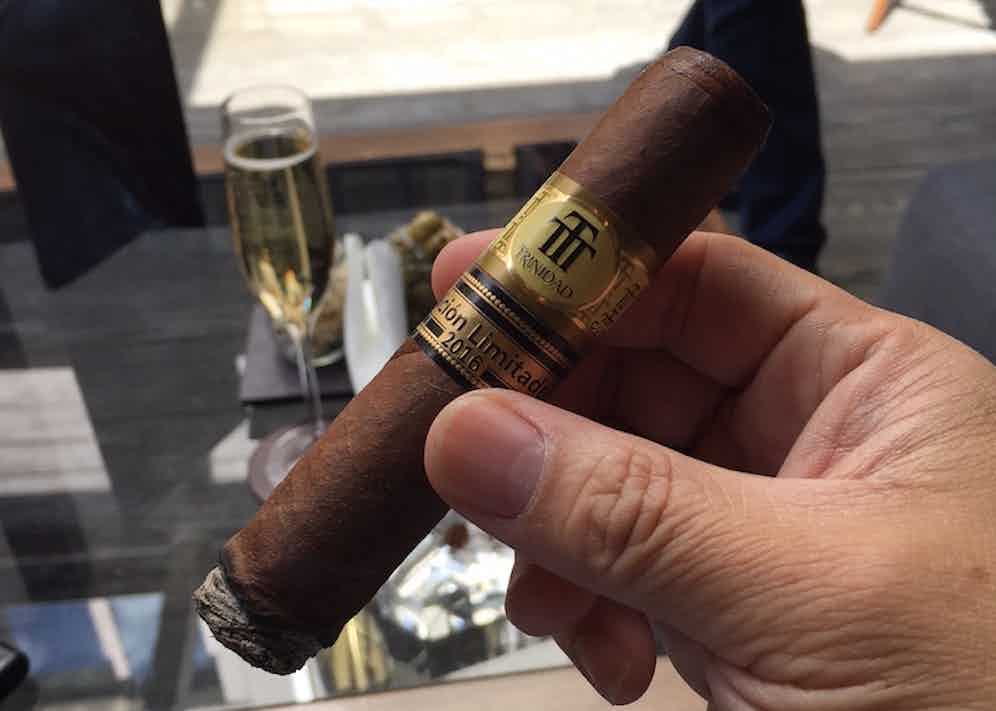 Firstly I'd just like to congratulate The Rake's editor, Tom Chamberlin on his recent nuptials and wish him and his new bride, Natasha, a fantastic new life together. I know Tom likes his cigars and I'm sure he smoked his way through a fair few at his wedding and on his honeymoon.

So I guess that brings us to how I can work this month’s online theme of love and marriage in to a cigar tasting? Luckily Aleks, The Rake’s Online Editor, gave me a nudge in the right direction. The simple answer is a cigar and drinks pairing. Fortunately as the Manager of the Edward Sahakian Cigar Shop for over 4 years, I've organised my fair share of pairing events.

July also happens to be the month in which my most esteemed employers and mentors, Edward and Eddie Sahakian, celebrate their birthdays. Weddings and birthdays mean only one thing to me for drinks, champagne! And for all you stick in the muds who believe you should only drink rum, whisky and cognac with cigars, pray open your minds and taste buds.

I managed to attend the 2016 Habanos Festival in Cuba and received some of the upcoming releases for 2016 (fingers crossed we will start receiving them in the last quarter of this year). I’ve chosen the Trinidad Topes Edición Limitada 2016 to try for this pairing.

People often ask if Trinidad cigars are Cuban, as they associate the name with the Caribbean island of Trinidad and Tobago. In reality, the brand is named after a rather famous city in the south of central Cuba. It was founded in the 16th Century and its official name is La Santisima Trinidad (The Holy Trinity). The cigar brand dates back to 1969 and was originally made for diplomats like Cohiba. Unlike Cohiba, Fidel Castro never gifted these cigars to anyone. They were given by lower ranking Cuban officials to lesser foreign diplomats. Their original size was a Laguito no.1 (which is exactly the same as the Cohiba Lancero) and which measures 7.6” (192mm) x 38. In 1997 the powers that be decided to change the size to 7.6” (192mm) x 40 and rename the vitola, Laguito Especial.

So I’m at my usual smoking terrace in London, enjoying a lovely summer’s day (I still brought my umbrella, it is London after all) watching the wispy clouds float by to smoke this unreleased cigar. The first appearance of the Topes is inviting. It has the modern Trinidad band with the Edición Limitada black and gold embossed band underneath it. The tobacco has been aged for at least two years and the wrapper is a beautiful maduro colour. As with all Trinidad cigars, the cap is formed in a pigtail.

For a relatively new and small brand, Trinidad has been chosen twice previously to release an Edición Limitada. 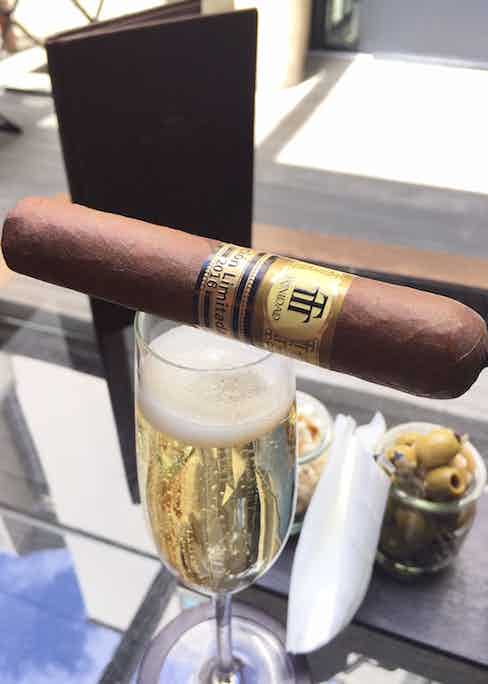 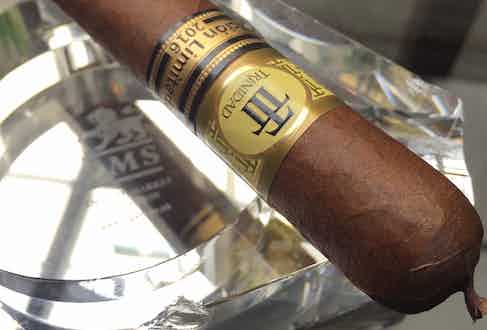 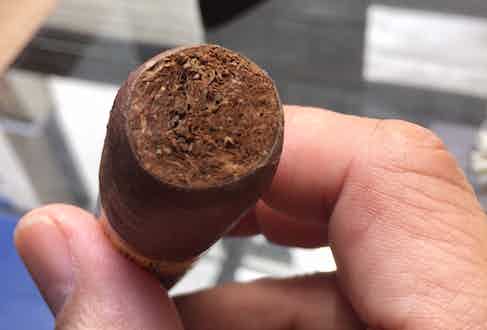 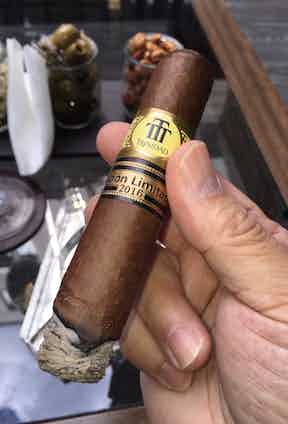 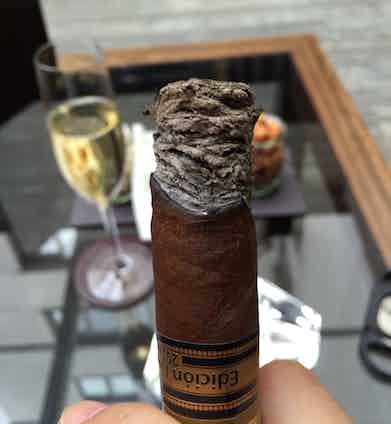 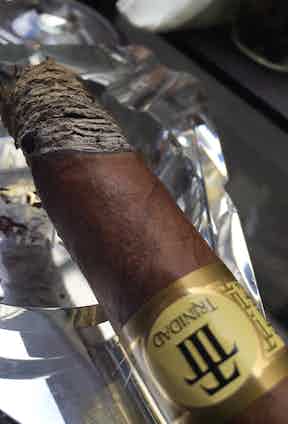 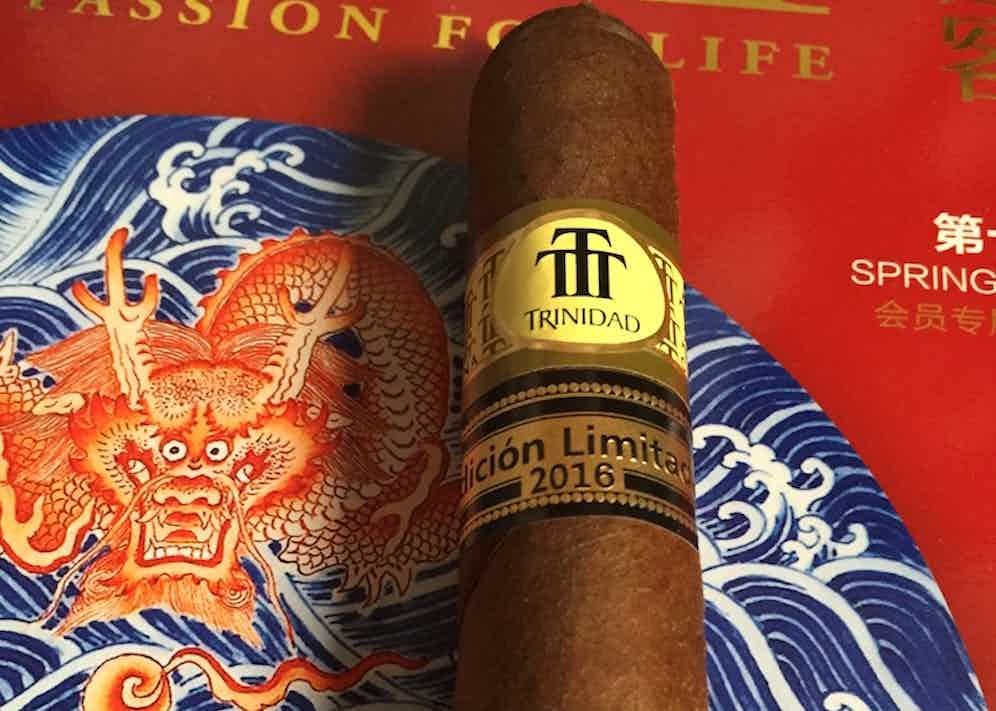 I’ve chosen a glass of Ruinart Brut non-vintage to pair with the Topes. Ruinart is one of the oldest houses in Champagne, founded in 1729. The non-vintage is made up of 40% Chardonnay and 60% Pinot Noir. The bubbles are fine and the nose is floral, the colour is golden, on the tongue, white peach is dominant. Even though it’s a brut, it is quite round and balanced on the palate.

The condition of the cigar is very good. Possibly a little over humidified, as it’s a little softer than I like. The retractable Roof is open today so there's a breeze through the terrace, which is great - if you're not trying to smoke a cigar. The aroma from the foot is leathery and woody. The pre-draw is perfect, bringing with it a little hay but predominantly flavours of leather and wood. The smoke production is good, which you’d expect from a cigar of this width.

Strength tastes like a medium to start with, with some notes of pepper on the back of my tongue. There’s a little bitterness initially, which is indicative of a young cigar. The woodiness is oakier which brings out a certain nuttiness - it’s tasty. The retro hale is a little bitter with stronger coffee notes. Trinidad released the Vigia in 2015 that is a similar shorter, wider gauge cigar but the Topes is much bigger on flavour and character. The burn is a little uneven; this is due more to the breeze than the cigar construction.

I take a sip of the Ruinart. The carbonation of the champagne refreshes your tongue, but the little bit of sweetness isn’t working with the first third of the cigar.

"That floral sweetness in the Ruinart brings out the smooth and balanced flavour of the Topes. The medium bodied woodiness complements the white peach and nuttiness in the champagne too."

Entering the second third, the bitterness has gone. The flavour is settling but still at a medium strength. Although the burn is a little uneven I've resisted topping it off with the lighter, sometimes you just need to let nature take its course. Just over a third of the cigar isn’t bad but I would have expected a longer ash for a wide gauge cigar like this, which belies a construction issue with how the tobacco was packed in the filler. The flavour is now reminiscent of the Ingenios at the moment. Some people don’t like the richer, slightly sweeter taste of limited edition cigars but I rather like them. I like the difference in flavour and it adds another dimension to any cigar brand. The flavour is quite rich and complex, smooth and very balanced.

I’m picking up just a little heat on my lips on the draw as I enter the final third of the cigar. As the draw is relatively easy it doesn't surprise me that the cigar is heating up a bit. There's a gentle increase in strength now and you can taste the nicotine. The toasty notes are intensifying along with the increase in woodiness and pepper. Still no relight needed, although the burn is a little uneven again. As the heat is just starting to build with each draw, I slow down my smoking, just to give the cigar a chance to cool down a little. The flavour is most definitely a medium-full smoke in the final third.

A near flawless presentation cigar. The wrapper was of the correct maduro colour with no blemishes or large protruding veins. Bands were affixed correctly. I’m sure that the larger shape will please many smokers, as it is in essence a fat robusto or robusto gordo.

The slightly open draw made the cigar burn a little hot in the final third. The draw was pretty easy and the smoke production was good. The burn was never even throughout the cigar, some of this was due to the breeze but the loose ash is a sign of below-par construction. It was never so bad as to make me pick up my lighter but I was constantly rotating the cigar to try to make the burn more even.

As this was a pre-production release, I cannot say that how the actual release cigar will be. All I can say is that this cigar was a very good representation of a Trinidad limited edition cigar. The profile and taste were both a good reflection of the two previous limited editions.

Champagne isn’t the easiest drink to pair with cigars. The Ruinart didn’t work terribly well with the first third as the bitterness of the cigar overpowered the more delicate champagne. Having said that, in the second third they came together very well. The cigar hits its sweet spot at this point and becomes smooth, rich and balanced. The style of the champagne was a perfect match to the cigar in the second third, if the cigar had been longer then the pairing would have been even more enjoyable. The strength of the cigar increased in the final third, as expected, and the champagne was little more than a palette cleanser.

I do enjoy a good champagne with cigars but more as a drink than a pairing. Vintage champagnes work very well but I would look to pair them with vintage cigars or alternatively with cigars that are on the mild side.