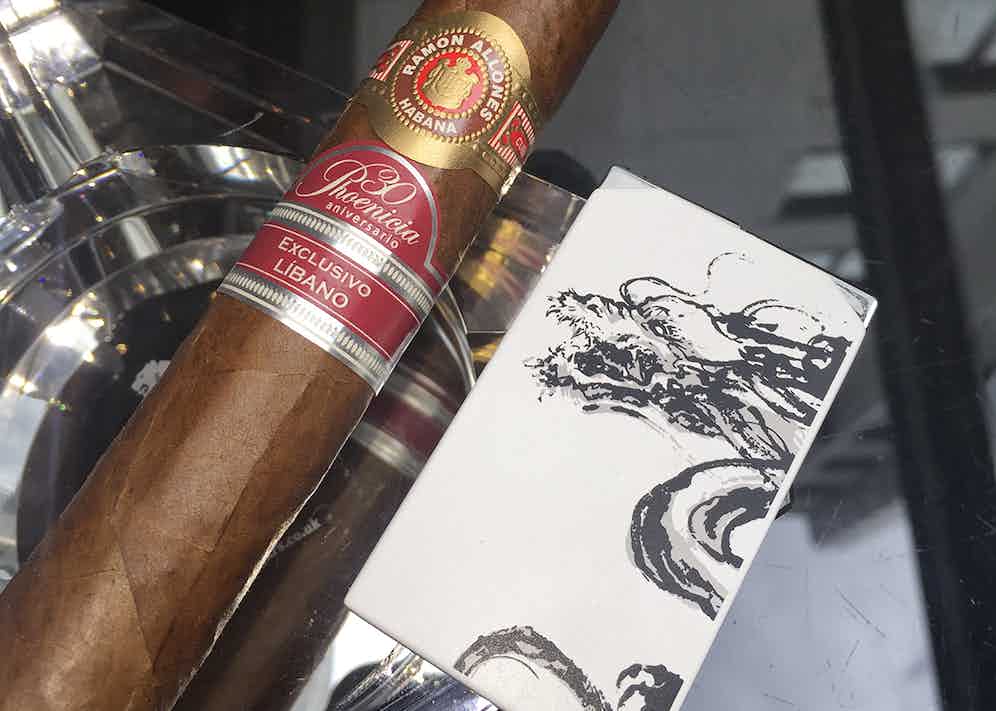 “Aficionado my ass….I just love to smoke cigars”. James Woods could not have summed up cigar smoking better. Sometimes we get bogged down in all the showmanship, titles and the great cigar debate but, we forget the simple pleasures a cigar brings. In solitude, a cigar allows oneself to get lost in thought, to literally meditate and focus solely on all the visual and olfactory stimuli a cigar gives you (this is how I like to do my tastings). It is a simple pleasure but, I’m glad there are a growing number of cigar smokers in the UK. With friends, cigars can become the focal point of discussion or encourage lively conversation.

Anyone who knows me knows I don’t like to call myself a Habanosommelier or even a cigar aficionado. I’m just a cigar lover. My CV is one thing but, I’m all about the pleasure and experience one gets from smoking a good cigar; sometimes alone or with friends; with or without alcohol.

When it comes to power, there are several Cuban brands that jump to mind. Partagás, Bolivar and Ramon Allones are the big three for me. A powerful cigar from Cuba is possible by adding (usually) more ligero filler tobacco than the other two. However, adjusting the amounts of volado and seco can also achieve interesting results in a Cuban cigar. Ligero is the most expensive filler leaf to produce as it requires the longest fermentation time. Ligero is used because of its combustibility and strength. It seems correct that all three brands are currently made at the Partagás factory in Havana.

This is the first Regional Cigar I have reviewed, so let me explain what they are. They are made with Cuban tobacco, 100% long filler and totally handmade in Cuba. They were created in early 2000’s, primarily down to Simon Chase (who was then, the Marketing Director of Hunters and Frankau, the UK Habanos cigar importer). Every Habanos distributing company in the World would be offered the opportunity to create (initially two cigars a year but then just one after 2008) a cigar for their region which was from a lesser known brand and was either a new vitola or a discontinued vitola). These have become very successful over the years and have given cigar smokers something new to buy on their travels. The first Regional release came out in 2005. Phoenicia is the name of the Habanos distribution company that looks after Lebanon, Greece, Cyprus, the Middle East, Turkey and anywhere in North Africa. This cigar is called the Phoenicia 30 to commemorate Phoenicia’s 30th year of trading.

The Phoenicia 30 is just beautiful. The shape and size of the Phoenicia 30 is exactly the same as the first cigar I reviewed for The Rake online, the Cohiba Sublimes LE 2004. It’s a big cigar for me, 54 x 6.5” is one of the largest sizes in the Habanos portfolio. The wrapper is a slightly darker shade than a regular Ramon Allones. You can see the oiliness of the wrapper shine. The quality of the wrapper is first class. The colour of the wrapper is about a Colorado with a hint of red. The veins you can see are fine and do not affect the look of the wrapper. The Ramon Allones band is the current band in use but, they have added a Regional Edition band which is silver and burgundy with “Exclusivo Libano” printed on it and has an additional crescent panel added to it with 30 Phoenicia anniversario. It’s a grand looking cigar. It has the classic Cuban triple cap finish.

I first check the cigar as usual by squeezing the foot gently, there’s a nice amount of give in the cigar which shows the roller has done a good job. It doesn’t crack under the squeeze, so it shows the cigar has been kept in a decent humidity and temperature. It also shows that it hasn’t been over packed or under filled. I repeat the gentle squeezing along the body, at the band and head. No hard spots or knots I can feel. I’m pretty sure this will be a good cigar to smoke.

The ash is a darkish grey, but just feels solid. I decide to do something a little unconventional for a tasting and that is to try a long ash. Long ashing is something some smokers do to check the construction of the cigar and also as a competition. Our very own Sir Winston Churchill was known to smoke cigars with a long ash and used it to mesmerise his audience as he spoke and waved his lit cigar around as he gesticulated. The audience often became transfixed on this amazing long ash that never fell, even when he moved his cigar hand wildly. Long ashing can become a bit of a chore as you cannot really move, plus you must smoke the cigar vertically. I was very surprised to be able to smoke this big cigar down to the band long ash style, at least 2/3 of the cigar as you can see from the picture. The ash that fell was very solid and shows the quality of the construction.

Apart from a little unevenness at the beginning, the Phoenicia 30 burnt very evenly throughout the smoke. During the long ash phase, I didn’t have to touch up the burn once. I only relit after the ash fell and I had to remove the bands. 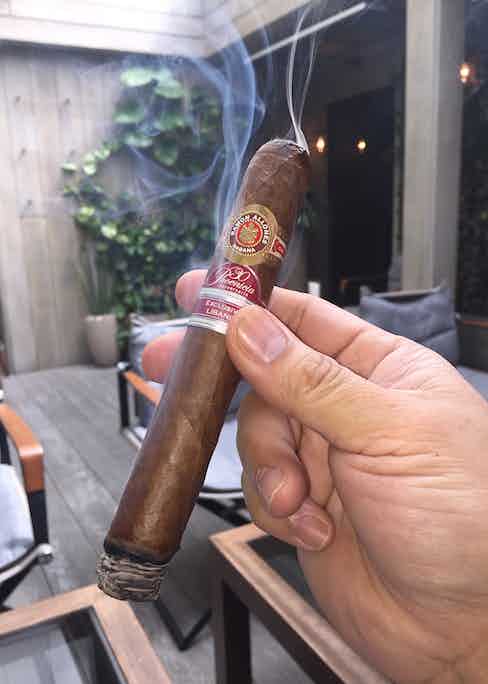 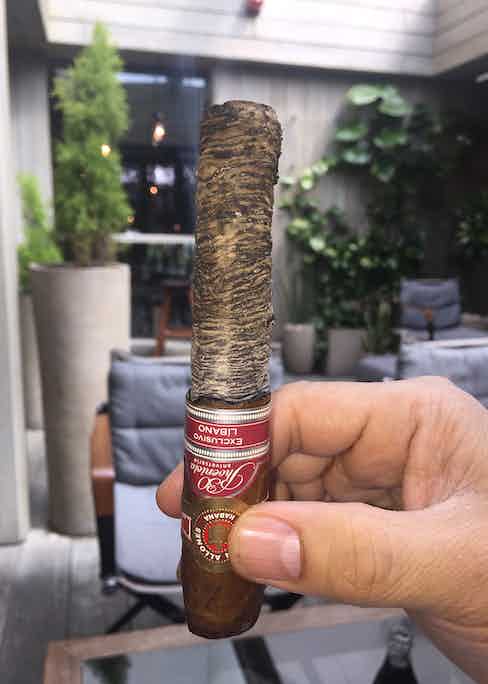 A gentle smell of the open foot reveals aged leather and heady smell of well-aged tobacco. I use my trusty Xikar X875 cutter to make a clean straight cut. The pre-draw is just delicious. Plenty of leather, cedar wood, tobacco and just a little sweetness. There’s a little hint of spice on the lips and tongue. This should come in at a medium full-full, based solely on the pre-draw flavours.

I’m test driving a gift lighter from my good friend and film writer/producer/director, Alex V Wong. It’s a nifty looking white dual flame lighter with a Chinese dragon on it by a company called Siglo. I like it because I can use the single jet flame to toast the foot to begin and then use the soft yellow flame to finish the lighting.

The Ramon Allones brand has always been one of my favourites and the Lebanese regionals have caught my eye, or rather my taste buds, because they (Phoenicia) have always chosen Ramon Allones and amped up the flavour profiles on all their Regional releases. Although Habanos classify this brand as full strength, I’ve always found it to be more medium-full as there was always a sweetness to the tobacco, which took the strength down on my palate.

The first few draws on the lit cigar reminded me how good Lebanese Regionals were. The draw was spot on; open enough to allow a good easy draw allowing ample smoke production. Straightaway I knew I wasn’t tasting an ordinary Ramon Allones.

There wasn’t much bitterness in the first third, which shows the ageing of the cigar had been good. The flavour was rich and full from the start. It was a good reminder that I needed to buy some Lebanese regionals for my personal collection. There’s enough spice on the taste buds to let you know you’re smoking something strong but, it’s mellowed slightly by that Ramon sweetness.

Just entering the second third, I decided to do a few retro hales. My nostrils tingle as I exhale. The tobacco is strong and still full of nicotine. I certainly don’t need to do many more retro hales, as the head buzz would be a bit too much for me.

As the nose fizz disappeared, I went back to smoking long ash style. The peppery spice dissipates in the second third. It’s replaced by stronger coffee notes and more cedar. Flavours are still building and changing.

The final third shows the cigar’s true colours. I’ve chosen to knock the long ash off just as the burn reaches the Regional cigar band, so that paper burn doesn’t affect the flavour for this tasting. The strength starts to shine again and I even get a hint of aniseed. Stronger, darker roasted coffee flavours. I smoke it down to under an inch, at this point the heat and burn become too much for me.

You can see from the pictures, this was a first class smoke. I thoroughly enjoyed it. Even though this was a big cigar for me, I took my time with it and produced a fantastic long ash. All I can say is if you haven’t tried one of these, you must! At just over 7 years of age, these could still develop further with a few more years. Right now it’s an excellent smoke but, it really could become one of the best Cuban cigars produced in the past 10 years.