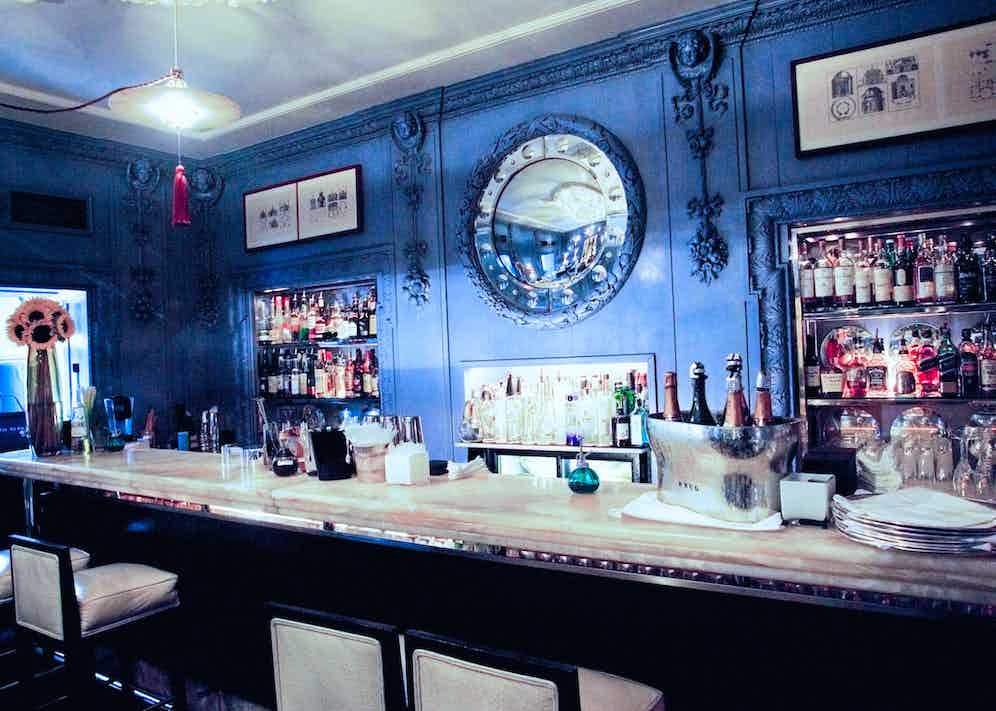 Lolling on a beach in the south of France, staring off into the infinite horizon where crystal-clear cerulean waters segue into azure skies, three youths divvied up the spoils of existence amongst themselves. With the world their proverbial and literal oyster, this was one of those masters-of-the- universe pow-wows that bright young things without a franc in their pockets but hearts brimming with daydreams are apt to have. 'Earth,' declared Arman (Fernandez). Claude (Pascal) chose words. And Yves (Klein)? Yves laid claim to the intangible space that envelopes us all. Call it Nietzschean der Wille zur Macht ('will to power'), the Pygmalion effect, self-actualisation in the organismic theoretical sense, or what the wheatgrass smoothie-and-colonics crowd hail in their New Age spiritual vernacular - otherwise known as psychojabberwocky - as the 'Celestine Prophecy', there is much empirical evidence that supports the veracity of the postulate known as the self-fulfilling prophecy.

Here at this conquer-and-divide pact, Klein had foretold the story of his art, his mission impossible: to plumb the depths of the infinite yonder. From the early Monotone Symphony(a single 20-minute sustained chord followed by a 20-minute silence) to the intense monochromes, all paved the way to the 'Proposte Monochrome, Epoca Blu' ('Proposition Monochrome: Blue Epoch') exhibition, the culmination of one man's singular vision - 11 canvases, all identical, swathed in a startling, saturated, soul-stirring shade of bleu, a striking hue almost retina-searing, but by virtue of not and just almost, exquisite to behold. The show went on to become a critical and commercial success, Yves Klein an art-world darling, and IKB ('International Klein Blue') an art world byword for killer chic. Colour had arrived, so to speak, moving beyond depicting to the depicted, from being the central component to becoming the art itself. Created with the assistance of Edouard Adam, a Parisian paint dealer, IKB was essentially pure ultramarine pigment suspended in a clear synthetic resin known as Rhodopas, which preserved the visual impact and showcased the brilliance of the pigment far better than other binding mediums, such as linseed oil.

Why blue? That, ladies and gentlemen, is a damn fine question, pardon my colloquialism. Over 300 years ago, Sir Isaac Newton recounts being 'In a very dark Chamber, at a round Hole, about one third Part of an Inch broad, made in the Shut of a Window', where he cunningly 'placed a Glass Prism'. What a very understated and prosaic manner of introducing and imposing his personal paradigm of colour unto Nature, the sly old fox. For, my friends, that is the very prism scattering pure sunlight into what Sir Isaac arbitrarily, really, determined to be seven individual hues. Till this very day, it is through his prism we view colour, his paradigm we organise colour - orange betwixt red and yellow, indigo inserted between blue and violet. Talk about 'God complex'. Anyway, were Newton peering down from the pearly gates (or wherever it is physicists-cum-theologians with heretical-to-orthodoxy Christian faiths go to Requiescat in pace), he would surely have approved; what could be truer art than coaxing the ultimate blueness out of blue?

That stake on the intangible space that envelopes us all made by a 19-year old boy boastfully trash-talking whilst sunbathing on a beach in Nice? Yves had made good on his promise, for in his eyes, no other colour had a quality as close to pure space as his beloved luminous blue, could be as symbolic as the incorporeal realm that lay beyond the pale. To experience a work by Yves Klein - or for that matter Mark Rothko or James Turrell - is to experience the sublime. Ditching 19th-century Romantic representational models (read: fuzzy seascapes, rolling landscapes and other picturesque vistas, sometimes degenerating into formulaic sentimental tack) in favour of apparently simple and seemingly random permutations of abstracted colour, light and space, these artists and their art elicit in, nay demand from, the viewer a response that is no less gut-wrenching, tear-jerking, heart-stopping and all-round transcendental. 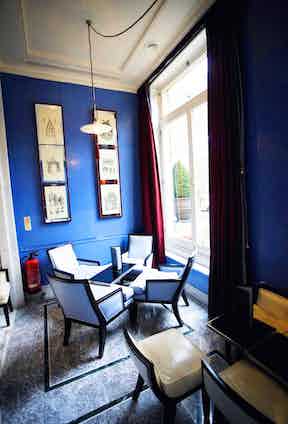 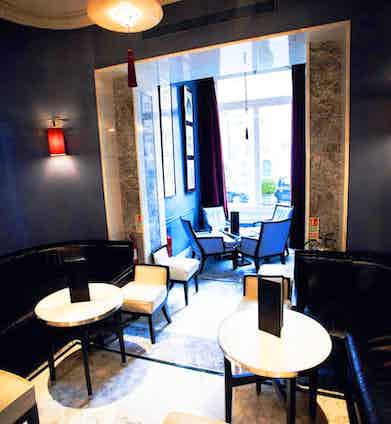 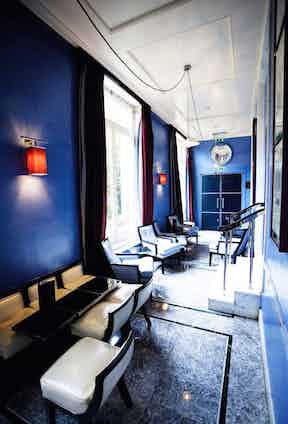 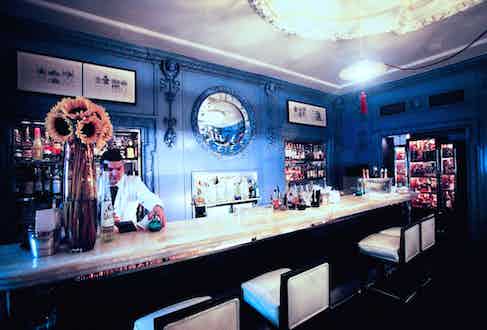 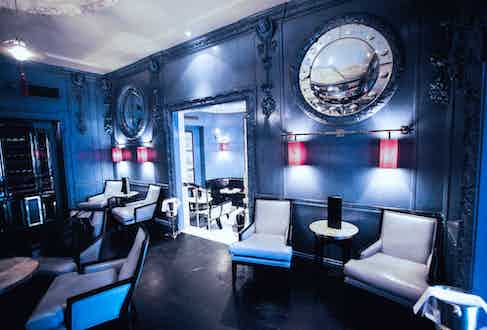 All colours evoke emotions, and blue is no exception. What is intriguing is that the colour Klein chose as embodying the sublime, which has on more than one occasion been compared to the divine blue of Christian iconography, particularly that of the lapis lazuli of the Madonna's robes in medieval triptychs, is also the signature colour of melancholy, the colour we typically associate with despair, despondency and depression, 'the blues'. But this is probably thanks to the sorrowful, down-and-out-of- luck-in-love young Werther's deliberate choice of robin's egg blue suicide garb in Johann Wolfgang von Goethe's 18th-century bestselling novel, triggering a rash of copycat robin's egg blue clad male suicides amongst the well-read, love-unrequited, inconsolable, moneyed and impressionable smart set in Europe.

And that is the crux of the paradox that is blue. A source of inspiration for artists through the ages - the skies in a Giotto fresco, the knowing innocence of Thomas Gainsborough's TheBlueBoy,the founding of Wassily Kandinsky's Der Blaue Reiter ('The Blue Rider'),Pablo Picasso's Periodo Azul ('BluePeriod') of mourning over his friend Carlos Casagemas' suicide, surely the apotheosis of the starving-artist myth and the ultimate romanticisation of martyrdom (populated by a baleful, emaciated, oftentimes-blind cast of alcoholics, whores and beggars, all replete with a blue-grey-green cast to their complexions) - the one subject on which we are unambiguous as far as blue is concerned is that it taps into the mystical depths of our being and the time-immemorial, universal quest for understanding the who, when, where, why and how of that particular conundrum. 'I adore The Blue Bar', cooed Madonna.

The feeling-like-a-virgin, causing-a-commotion one, that is. She who is not the Virgin Mary, one must applaud for the appreciation of all things properly English and grandly so, let us count the ways - early Guy Ritchie, Skibo Castle (oops, that's Scotland), one-time BFF Gwyneth Palthrow (OK, so she's of Ashkenazi-Russian-Jewish-and-Pennsylvanian-Dutch descent and 110-percent born in the US of A, but surely that more English-than-the-Queen's accent, playing Margot in The Royal Tenenbaums, and being married to Coldplay's Chris Martin count towards honorary smugly supreme Englishness), coming up with The English Roses.

You and me? Of course, we adore The Blue Bar. Quite frankly, how could we possibly resist the charms of this institution at The Berkeley? It had us at 'hello', Madge or no Madge, opining or not. To begin at the beginning, unspoken and implicitly, it's a room truly dedicated to the high art of the cocktail and splashed the colour that exemplifies, that stands for, the eternal juxtaposition between the agony and the ecstasy, the beautiful and the damned. After a martini or three here, it's easy to imagine one is a djinni cocooned in a Bombay Sapphire bottle and observing through the cool blue glass the amusing hi-jinks Knightsbridge habitués, arty/fashion types, and a healthy sprinkling of beautiful people and slebs get up to in a night on the tiles. Very sceney, see- and-be-seen, off-the-charts hipster quotient, as you'd expect. No wonder John Galliano has pronounced The Blue Bar his 'favourite home from home'.

A part of the original hotel from the turn of the 19th century (which stood on the edge of Mayfair, at the junction of Piccadilly and Berkeley Street) continues to live in the current location near Hyde Park Corner in Knightsbridge (the move took place in 1972) - some of the wood panelling and decorative carvings were restored and used in the Lutyens sitting room, which eventually became The Blue Bar in 1999. Designer David Collins had christened the pale blue with distinct undertones of lavender and grey he's used 'Lutyens Blue', after the prolific architect Edwin Lutyens and the name of the sitting room the lounge replaced. Since then, Lutyens Blue has turned out to be the barfly equivalent of IKB in art circles, insider speak for drop-dead chic.

The suave palette, low-slung seating and Art Deco touches come together delightfully in David Collins' urbane signature style. Sumptuous interior details - everything from the white onyx bar to the jet-black crocodile-embossed leather floor - will not go unnoticed by aesthetes, luxe addicts and design fiends. And in spite of being quite the scene, the room has a few intimate nooks if you're in the mood for a more low-key variety of nocturnal unwinding, thanks to the well-planned layout spread across three distinct areas. Then there's the fantastic array of over 50 whiskies, recherché range of cognacs (including the Rémy Martin Grand Louis XIII Black Pearl), a discriminating collection of champagnes, perfectly-crafted classic as well as house cocktails (we adore the Truffle Martini), a pretty nifty wine-by-the-glass selection, the genius Grape and Smoke menu featuring splendid cigar and wine pairings, very tasty bar snacks and nibbles, and last but not least, attentive and polished service.